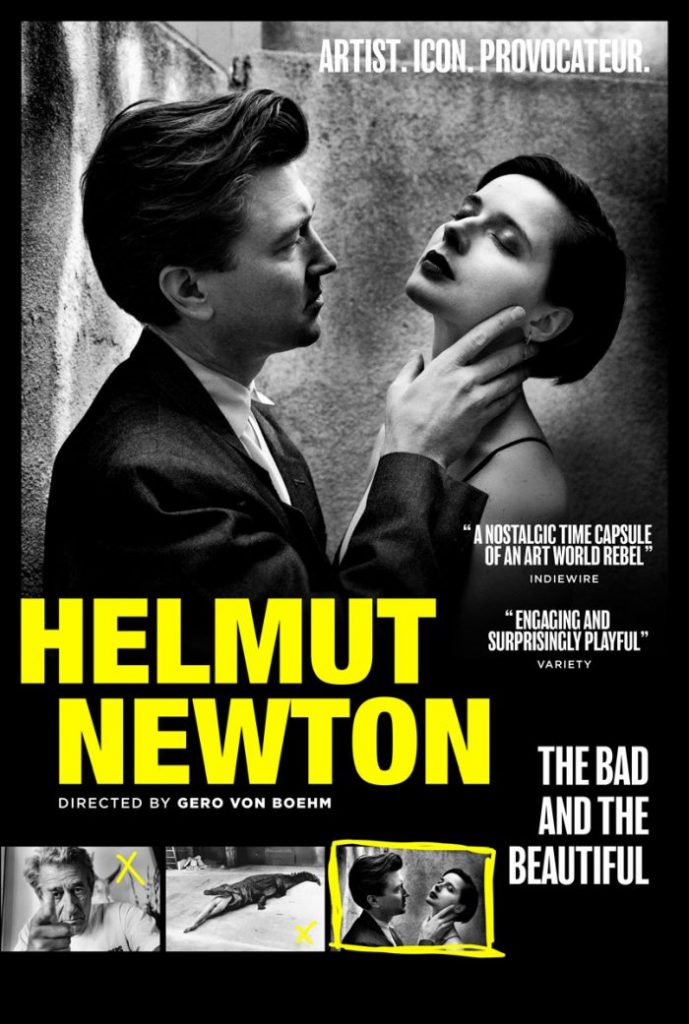 “A lot of the men told me they were afraid, the girls look down on the man who is looking at them.”

Helmut Newton, who passed away in 2004, was one of the most famous photographers in the world, especially in the realm of fashion photography. He was also often very controversial, not least for his very stylised nude images of women. For some they were the height of misogyny, the photographer arranging women’s bodies in a style and pose that fitted some mental image he had, indulging his own inner fetish of how an idealised female form should be, the models denuded, not only of clothes but personality, becoming like artfully arranged mannequins for his camera & mind.

But for others he created images of very strong women, often sexually imposing – as the quote by Newton himself at the top of this piece indicates, in many poses, despite being naked ostensibly for the “male gaze”, the women strike such a powerful pose, often shot from a low angle so they seem to be looking down at the viewer, their physique idealised, and powerful (like a cross between Classic Greek statuary and the idealised athletic bodies Leni Riefenstahl filmed in the 30s), in a manner which could intimidate the viewer. In some ways they look more as if they are the ones in the position of power, quite assured of their own place, tolerating the gaze of the viewer, not at the mercy of it. 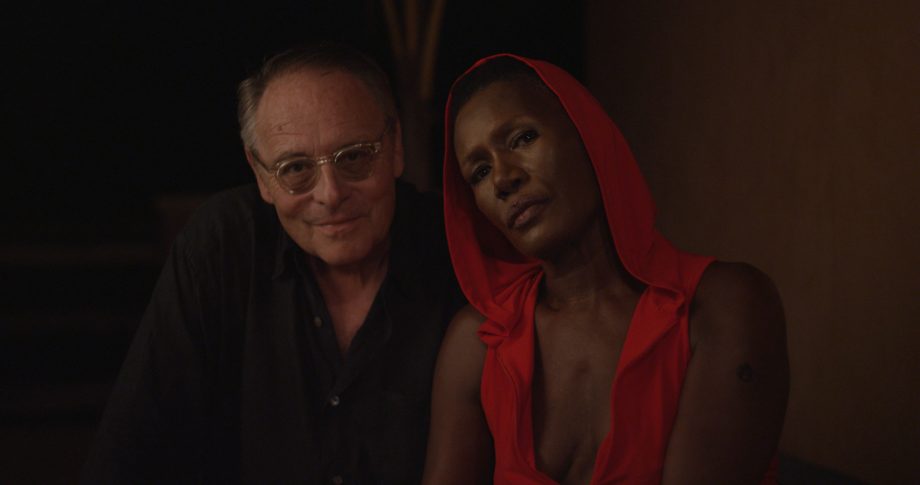 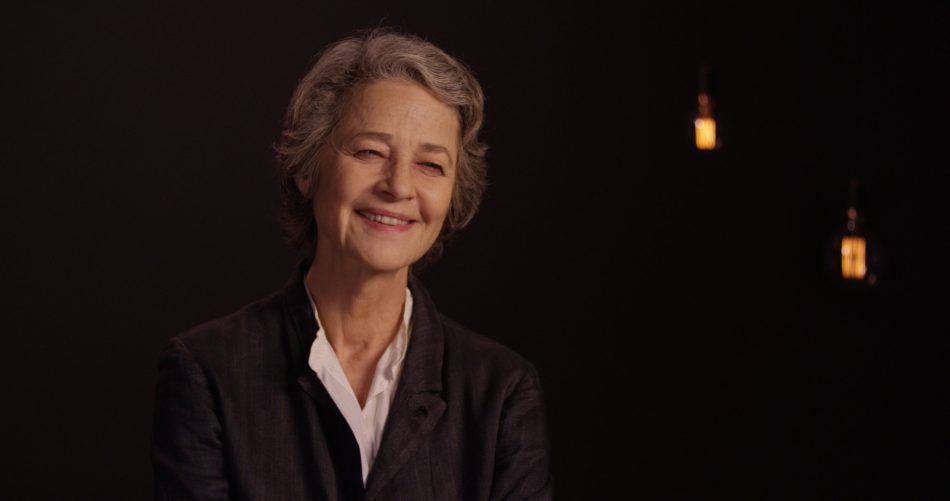 Some of this is corroborated by the many famous “talking heads” included in Von Boehm’s documentary, which includes his wife (and sometimes model and fellow photographer) June Newton, Grace Jones, Charlotte Rampling, Isabella Rossellini, Anna Wintour, Claudia Schiffer, Marianne Faithfull and more. Rossellini, who was first photographed by Newton with David Lynch during the Blue Velvet shoot, noted he posed her with the famous director almost like a puppet that Lynch was moving as he wanted it to move, which, as she adds, in a way is partly the actor-director relationship so it worked quite well. Charlotte Rampling commented that he could be provocative, but that can be a good thing as she thinks the world needs a little provocation from time to time, especially in the arts, as it stimulates thought and discussion.

The formidable Grace Jones laughingly recalled him dismissing her at first because her breasts weren’t large enough (which rather adds to those arguing he was a misogynist who saw women as objects for his imagination and lens), but he eventually did make a pretty remarkable sequence of photos with her, notably some with actor Rolph Lundgren, which remain pretty striking. These included some interestingly posed nudes with the pair looking almost sculpted, one with Grace, already a tall and pretty striking looking woman as we all know, looking even taller and more imposing as she stand nude in a high position in a truck looking down on Lundgren (and by extension the viewer). “He was a little bit perverted. But so am I, so it’s okay,” Jones added, with a huge laugh.

The film does not ignore his detractors, however – for instance there is a fascinating clip from a 1970s French talk show with Newton and Susan Sontag, where she says that she quite likes him personally, but she has great problems with his work, and considers it to be strongly misogynistic. Newton replies (also in French) that he cannot be a misogynist as he loves women more than anything else in the world. Sontag fixes him with a look and coolly responds that she has heard so many misogynists make exactly that claim that they love women, with the inference being that no, what they really love is their own, internal, idealised version of what they want a woman to be.

There are other moments that show a sly sense of humour – he offers, for instance, to do a portrait shot of French politician Jean-Marie LePen. Who is of course flattered the world famous photographer wishes to do his portrait. Why does Newton – who was a child in Germany during the rise of the Nazis – want to take a portrait of this far-right fascistic politician? Well it turns out he does a lovely portrait, suggesting LePen bring his beloved dogs into the picture – LePen unaware that Newton is quite deliberately styling this portrait of the French far-right politician to look like a famous portrait of Adolf Hitler with his dogs. By the time LePen realises he has been played and the image criticizes and pastiches him and his lamentable politics it is too late and it has gone to press. 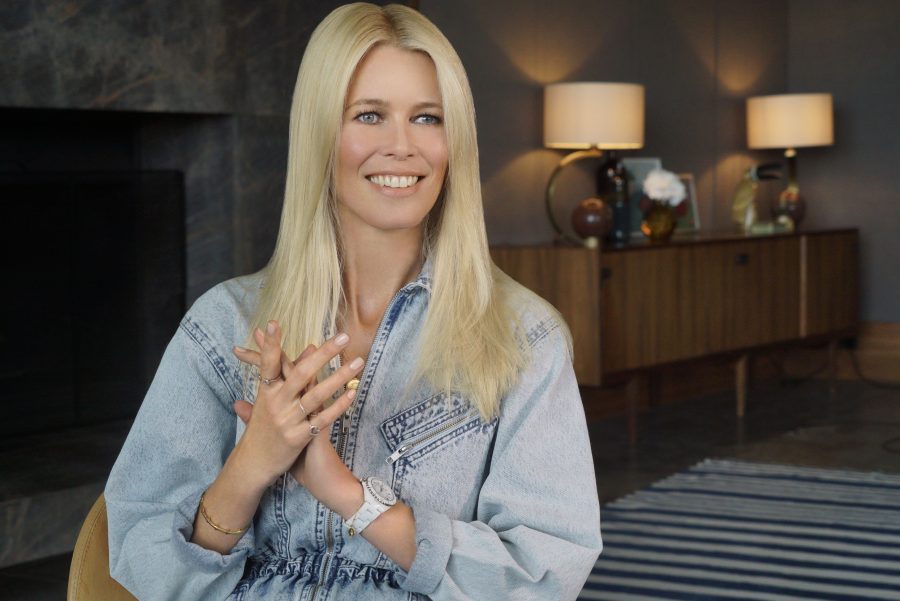 Other subjects discuss his work in terms of time and place, especially the 1980s fashion world, where his style of photographing women coincided with the rise of designers like Karl Lagerfeld, their fashions and the stylistic approach of his camera working well together. Other more personal moments reveal the person behind the lens, away from his “perfect”, idealised model imagery, his wife June recalls him taking his camera to visit her in hospital, but knowing this was a coping mechanism, that having the camera there helped him mediate the terror of seeing a loved one ill and in hospital, gave him something to cling to, some structure, a little control

It’s a fascinating documentary of an iconic twentieth century photographer; where you may fall on the discussion over celebrating or exploiting women in his imagery is a debate that I suspect will long continue, and as the documentary shows, those who knew him best, those who worked with him, have different opinions themselves on this issue. What the documentary does well is to show his work, place it in some context both of its time and of his life and influences, and to explore these different views of his work, while also showing that we are talking not just about these issues but about a person and their life, with all the complexities that entails.

Helmut Newton: the Bad and the Beautiful comes out via Blue Finch Releasing in Curzon Home Cinema and Digital Download from October 23rd. This review was originally penned for Live For Films.