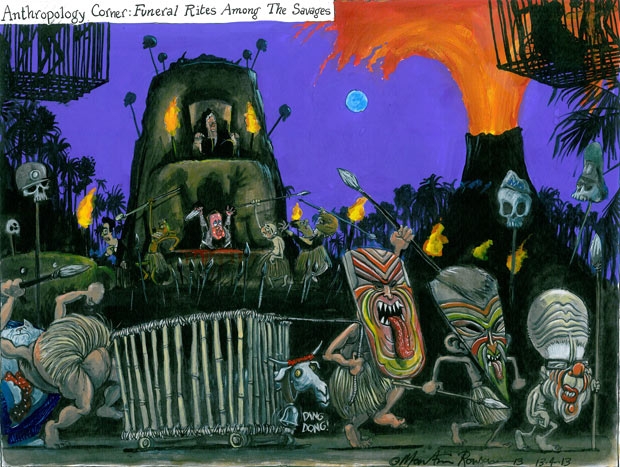 Our family and friends had the sad task of saying goodbye to my Uncle Ted this weekend. On Friday evening his body was moved to the chapel where he worshipped for years and worked in a variety of groups and movement to help other parishioners out. A great many of them turned out to pray for him at the requiem mass and on the following morning for the actual funeral service. In fact there were so many people there taking communion or a blessing after the service we were late getting to the cemetery; he was a well-loved man and it was uplifting to see how many people outside of our family came along.

In a bitter twist the requiem on Friday the 13th (of all days) fell on the day which would have been the Comrade’s 74th birthday. It was pretty emotional as you can imagine; for a moment I was going to have to step in as one of the bearers as another bearer was held up, but thankfully he arrived just in time. Naturally I agreed right away when my aunt asked me if I would step in, but I was also relieved not to have to do it as it was emotional enough already.

I was, however, one of the cord holders at the actual burial, the first time I’ve ever had that sad, final duty. I couldn’t say no, but it was one of the hardest duties I’ve ever had to perform. Obviously the professionals there have the large straps to properly lower the casket, the role of the cord holders is ceremonial. But if means that I was standing there right over the plot and I helped to lower my dear uncle down into that deep, damp hole. That really hammered home the finality of it all as I let the black rope slip through my fingers and watched his casket sink deeper and deeper. I know that what’s in there isn’t really him – the thing which made him the person we love has gone from that vessel – but its still damned hard to do.

It breaks me up even a few days later just thinking about it, the image of the wooden casket with his name on brass retreating into the earth. It was onerous but I felt I had to do it for him; many years ago my uncle asked me to do this when we buried my papa, his father. That was the first time I had been old enough to go the graveside part of the service and I was too young to handle it and had to say no. This time I carried it out for him, but I was so relieved to get back to stand with my mum and dad as soon as it was done. Still, hard as it was to do, it did give me a sense of closure.

The awful weather of the last week lifted for us on the day of the funeral and we had a crisp, cold, clear sunrise coming in through the stained glass of the chapel early in the morning; a huge full moon still hung over the Campsie Hills when I woke up at my parents. Naturally more than a few of us joked that with all the work he did for the parish the Comrade’s connections upstairs had arranged a decent bit of weather for the day. He never lost his faith even to the end; we never argued over this sort of thing, he knew I didn’t believe and he did but we both knew everyone has to take their own path and left it at that. I almost envy him the strength of his belief and, much as I personally dislike religion, I know it was a huge strength to him. There were three priests carrying out the services, including a rosary at the grave, which I’m told is unusual. One priest was his brother-in-law while the senior priest was also a good friend of his and as such he made the eulogy far more personal than these things sometimes are – he was, after all, mourning a friend as well as giving a parishioner his last services.

But he’s out of it all now – regardless of which spiritual belief system (if any) that anyone follows he is now free of the pain he was in. And the doctors and the support of his family – not to mention his own strength (and that damned stubborness, which I think I get from him) – he had more years than we thought; four years ago or so when it was first diagnosed he was so ill we thought we’d lose him within a few months at the most. Instead he enjoyed four more years and for most of that was fit enough to make the most of them, including making his golden wedding anniversary and to see his brother become a grandfather for the first time only a few weeks ago.

And I got to see more of some of my family members than I have in ages (sad, as you get older that sometimes you only see some folk at funerals and weddings), including my uncle who made the trip over from Canada to bury his brother and stayed over for a couple of nights with my mum and dad back home. I’m not five anymore and know that a hug from your mum can’t make everything better anymore, but it certainly still helps. Okay, maybe that’s a little slushy, but I don’t give a damn, we’re a touchy-feely family for the most part and even the most cynical of us knows deep down that a good hug from your folks is one of the best things in the world, whatever age you reach.