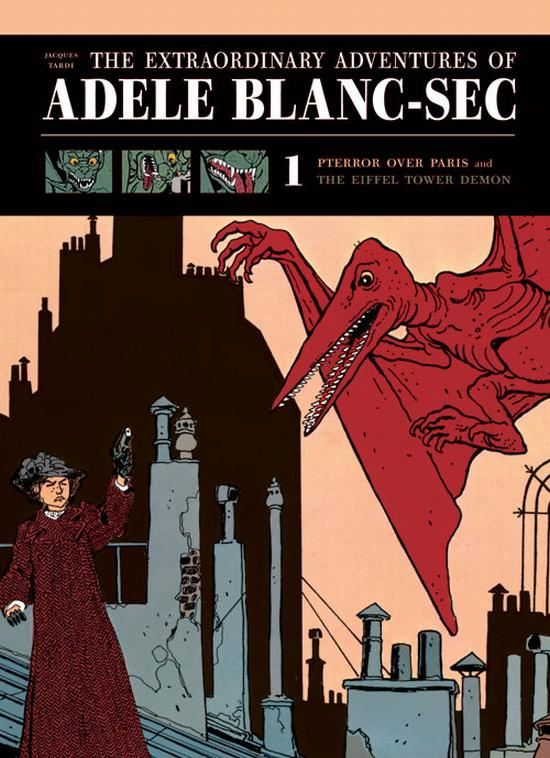 And another Jacques Tardi piece I wrote for the now-defunct Forbidden Planet Blog, but somehow forgot to cross-post here on the Woolamaloo (in my defence I spent many of my own evenings writing or editing articles for the FP blog, unpaid, and didn’t have time or will to then do so on my own blog). So here below is my 2014 review of The Extraordinary Adventures Of Adele Blanc-Sec:

French creator Jacques Tardi has to be one of the most respected writer-artists working in comics, European or world-wide, and he is also a huge favourite of ours. Like Bryan Talbot he seems to have an uncanny ability to move through different mediums, adapting his art and style to suit all sorts of stories, from his early work back in the 60s in the famed Pilote comics magazine through adapting hard-boiled urban crime novels and his anger-fuelled, horror-filled World War One strips, but he has also created one of the great heroines of European comics, Adele Blanc-Sec, a writer by day, adventurer by night, Set in early 20th Century Paris, just a few years before the Great War, Adele stands out in an era when women were expected to ‘know their place’ in society, being a single woman of means, more intelligent and observant than the men around her and certainly far more adventurous.

Like Tintin she is an intrepid investigator of mysteries, and there is also something of the classic Scooby-Doo here as well in that there is often a fantasy or supernatural element (or at least seemingly supernatural – or is it??) to her stories. Fantagraphics have been translating and publishing Tardi’s works in English, to much acclaim, a series largely driven by Fantagraphics’ own Kim Thompson, not only a champion of quality comics work but also a multi-lingual editor, translating these works himself until his recent death (a major blow for both the publisher and the comics community in general). This first volume has been out of print for a while, but with a fresh print run on the way it seemed like a good time to turn our Classic Comic spotlight on to it. 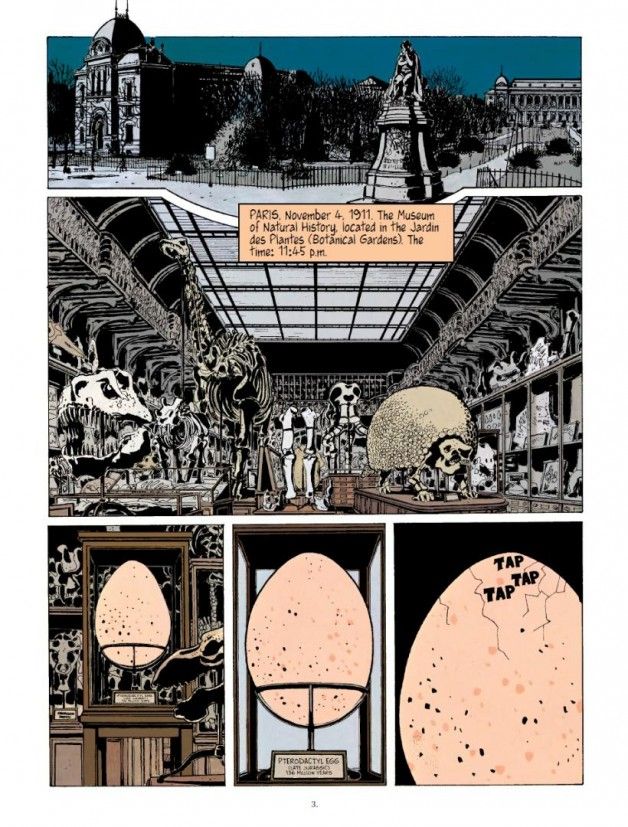 This handsome hardback, full-colour volume actually boasts two stories in the one volume, collecting two of the original Adele Blanc-Sec albums, Pterror Over Paris and The Eiffel Tower Demon. Pterror introduces Adele to us and also the bizarre stories she can be caught up in, in this case a madcap science fiction tale worthy of a Victorian writer like Verne or even Conan-Doyle (in his Professor Challenger mode), in which a peculiar experiment, part palaeontology, part medical science, part mystical-mental ESP powers (a not uncommon theme for the era) combine in an attempt to resurrect a Pterodactyl from its millions of years of fossilised slumber. Those same mental powers which brought this extinct flying dinosaur back from pre-history are meant to guide it, but the animal instincts are too powerful and freed from it’s tomb the creature soars into the night-time skies of 1911 Paris and hunts on the wing, as it was meant to, bring terror – or ‘Pterror’ as the title puns – to the City of Lights, and drawing in both Adele and the bumbling police inspector Caponi (who became a regular character in the series). 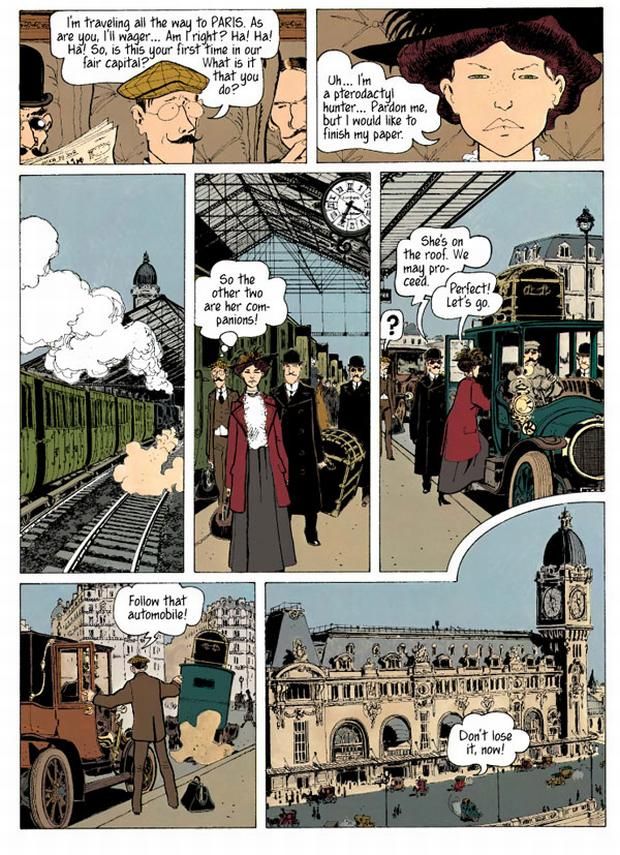 What follows is a spectacular piece of high adventure as the incompetent police, scientists from the Museum of Natural History (where the Pterodactyl emerged from) and Adele all follow the trail of death and destruction left in the dinosaur’s wake, each with their own ideas and agenda. As well as superb Boy’s Own style adventure moments (the beast swoops down and rescues a man falsely accused of murder right off the guillotine scaffold) there are nice touches of humour (government minister calls head of police to complain who in turn calls his senior officer who calls his district chief who calls the unfortunate Caponi in a classic bit of bureaucratic pass-the-parcel). The second story offers a classic supernatural cult conspiracy tale, an elite of the city’s movers and shakers, hungry for ever more power (as those types often are), seek to bring back into our world the demon Pazuzu. But who is truly controlling this cult, and is the demonic monster we glimpse (even entering Adele’s nightmares) real or a front, just a control method to garner more power for some?

And the art throughout is glorious – Tardi creates and portrays a strong female lead character but doesn’t sexualise her – Adele is written and drawn as what she is, a strong, independent woman who knows her own mind and she isn’t waiting for some hero to come along, nor does she pine for romance. But away from the characters, there is also pure joy to be had in his depictions of early 20th century Paris. The scenes in the historic heart of this beautiful city are especially wonderful, because many of those locations are largely unchanged today. An opening scene in a wonderfully detailed Natural History Museum in the Jardin des Plantes depicts its iconic great hall while a number of scenes on famous Parisian streets will be instantly recognisable if you have ever walked them, or even if you have only viewed them in photos and films, this realistic detailing giving the grounding that allows the more fantastical elements to take flight (in the case of our winged dinosaur, literally). 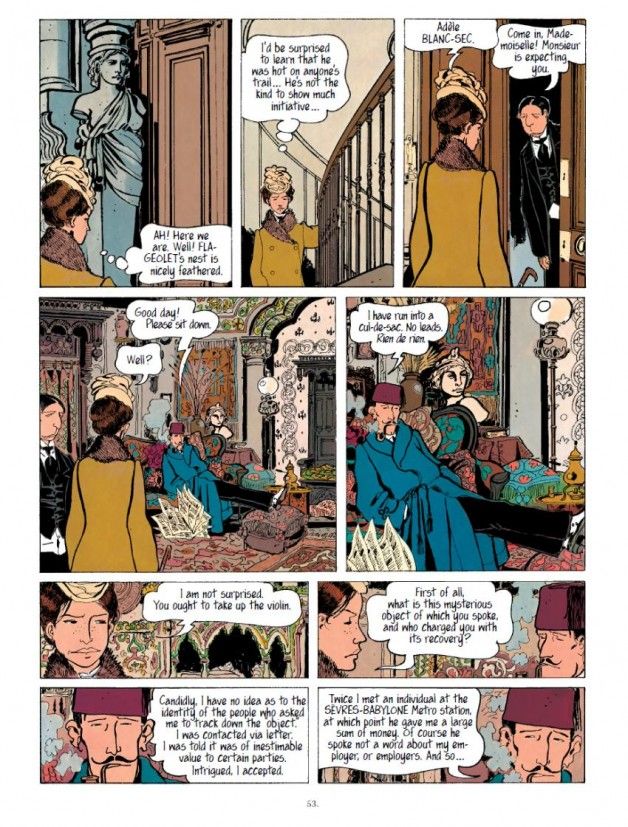 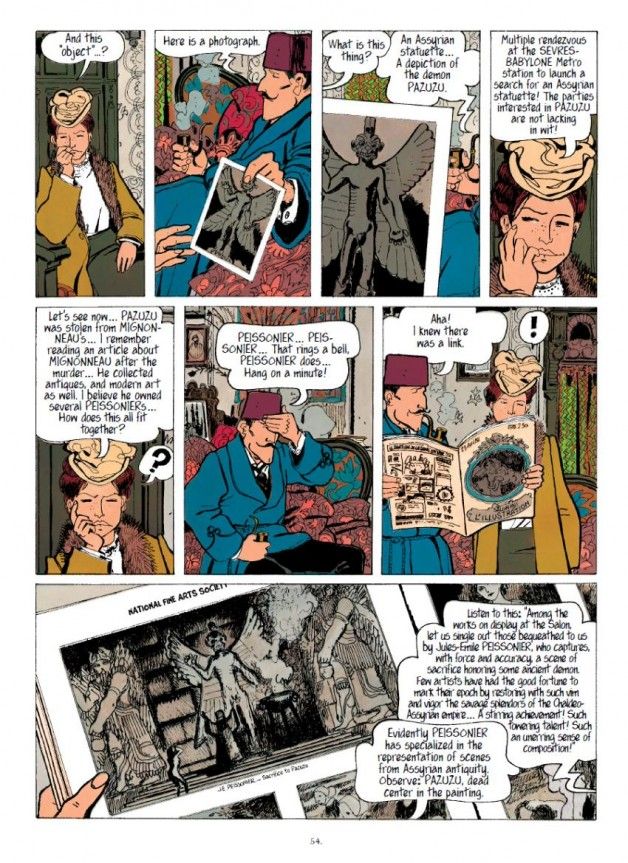 In the second tale we go from the famous Parisian underground tunnels to the heights of the majestic Eiffel Tower on a snowy, winter night, and it is all so beautifully executed you find yourself going back through the book’s pages after finishing the story, just so you can stop and admire many of the scenes, especially those beautiful cityscapes. Stunning art from a master of the medium, a strong female lead, fantastical adventures which both pay homage to those Victorian/Edwardian lost world science fiction tales while at the same time also clearly poking a little fun at how ludicrous the concept is to modern readers (but in a loving way), demonic being and ancient dinosaurs running amok in the Paris of a century ago, scenes filled with period detail, what’s not to love here?