On this day in November 1963 the first episode of Doctor Who was broadcast. A happy Who Day to my fellow time-travellers, may you never trip over your own long scarves.

“I do what I do because it’s right. Because it’s decent. And above all, it’s kind. Just that. Just kind.” 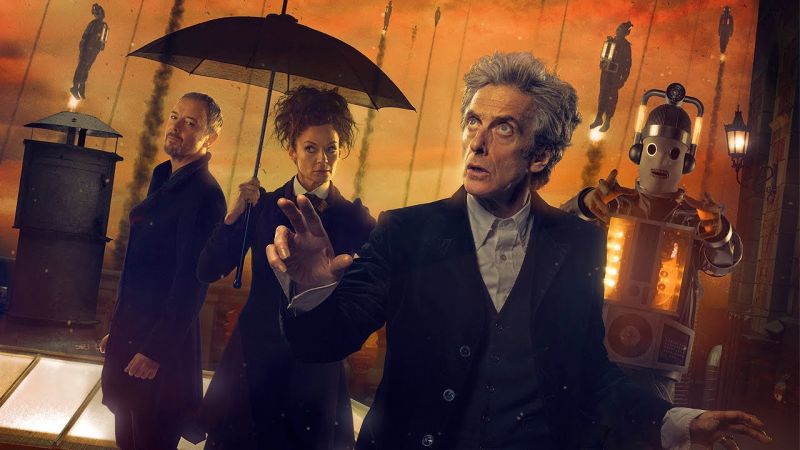 Peter Capaldi’s Doctor articulating a damned fine philosophy in Capaldi’s season finale of Doctor Who. I hope those words sink into many of the younger viewers of Doctor Who and stay with them. Fictional heroes and their examples can be as important to our development as the real world heroes, and it’s clear with this line that Steven Moffat understands this and is trying to make sure we got the hero we needed. Perhaps one day when they are older one of those former child fans will be faced with a difficult choice and they will think back on those lines, and they will know where they need to steer their moral compass.

Some cool new Doctor Who merch in the offing! Some people are very, very cruel to their old Type 40 TARDIS and such people should not be allowed to have time and space machines… Just been released, new version of Peter Davison’s 5th Doctor along with the same era’s Master incarnation (as played so well by the late Anthony Ainley). I really want these for my desk to go next to my Tom Baker figure; Baker then Davison were the main two Doctors when I was growing up, so they’re always going to be ‘my’ Docs.

And at the same time there’s a new figure of Davison’s Doctor as he first appeared right after the regeneration scene at the end of Baker’s swansong in Logopolis/start of Davison’s first story, Castrovalva (since the former lead directly into the latter), the Doctor now regenerated into his new form but still clad in the previous incarnation’s clothes (Baker’s later period costume of the long, burgundy coat and matching scarf):

Brian Rimmer presents a time-travelling musical slide through more than forty years of theme music and opening sequences to the world’s longest running science fiction show, Doctor Who. I confess my favourite remains the Tom Baker era ‘time tunnel opening (the main Who era for me growing up), with the same ‘slit-scan’ technique used in the stargate sequence for 2001, but it’s fun to see them all back to back like this, from the early Hartnell era of 1963 (and the logo that looks like ‘Doctor Oho’ for a second before becoming ‘Who’) through to 2010’s revamped opening and music for Matt Smith’s Doctor. And through it all that immortal, iconic bass line, duh duh duh duh, duh duh duh duh, that’s been reworked endlessly across the decades by various arrangers for the show and by other musicians like Orbital and Pink Floyd; those bass lines were the signal to generations of kids that it was Saturday, tea-time and that meant marvellous adventures and scary monsters (and jelly babies). How lovely that it still means exactly that to a new generation of kids watching the new show and still loving it. (via BoingBoing)

Now this I want – although I may run out of desk space for all of them. All eleven Doctors, from Bill Hartnell’s original 1963 Doctor through to today’s Matt Smith in one set. Far too good for just kids!

Just announced new Doctor Who action figures based on the final two part tale that saw the end of David Tennant’s tenure as the Doctor, there’s a set of End of Time figures coming soon, with the injured Tennant Doctor, the blonde Master, Timothy Dalton’s impessive, be-robed Time Lord and – wait for it! – the first Matt Smith Doctor Who action figure, with him right after the regeneration, still in the previous incarnation’s clothes.

And on the fun side there’s also a new Time Squad set of Doctor Who figures coming, with the collection coming together to assemble a Master figure. Funky!

The Tesla Coils do their own unique interpretation of the iconic Doctor Who theme (via Boing Boing) – geektastic!

This fan-made anime-style Doctor Who is pretty bloody good – Jon Pertwee era Doctor kicking it Japanese anime style with his Venusian Aikido, genius! I’d love to see a pro version of this authorised by the Beeb:

The penultimate episode of ITV’s Primeval comes up this Saturday and its penned by the very fine novelist, screenwriter and comics scribe Paul Cornell, who was also responsible for some of the finest episodes of the new Doctor Who – “Father’s Day” and “Human Nature”. We were lacking time for a full-length interview but I couldn’t let it go past without marking it and Paul kindly took some time out to answer a few questions for the Forbidden Planet blog, should you fancy a read before the episode airs on Saturday evening.