Mary Wept Over the Feet of Jesus, 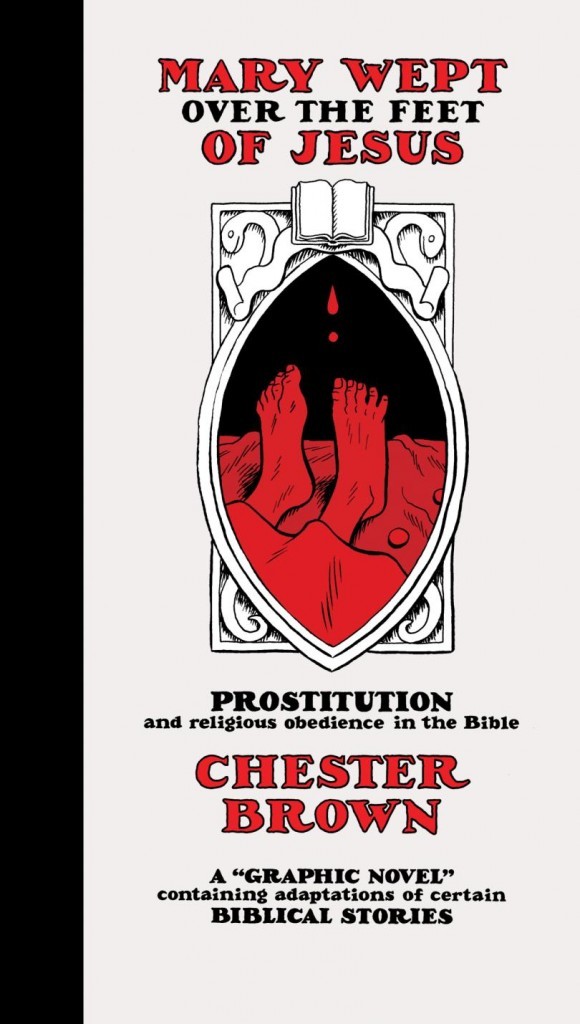 Chester Brown has to be one of our more uniquely interesting comickers, tackling sensitive – indeed even controversial for some – subject matter with a deft hand, an open mind and a strong element of respect and sensitivity. And tackling Biblical topics is an area likely to generate debate and, I would imagine, controversy, especially when the subtitle is “Prostitution and Religious Obedience in the Bible” (some people just can’t deal with those concepts, and sadly those are the sort of people who could most benefit from reading and thinking about some of the issues raised). Those of us who have enjoyed Chester’s frank and thoughtful work such as Paying For It, which looked at the world of sex workers and those who go to them, will not be at all surprised to find that here he is considering elements of sexuality and gender issues and perception and where they fit into the general human condition. 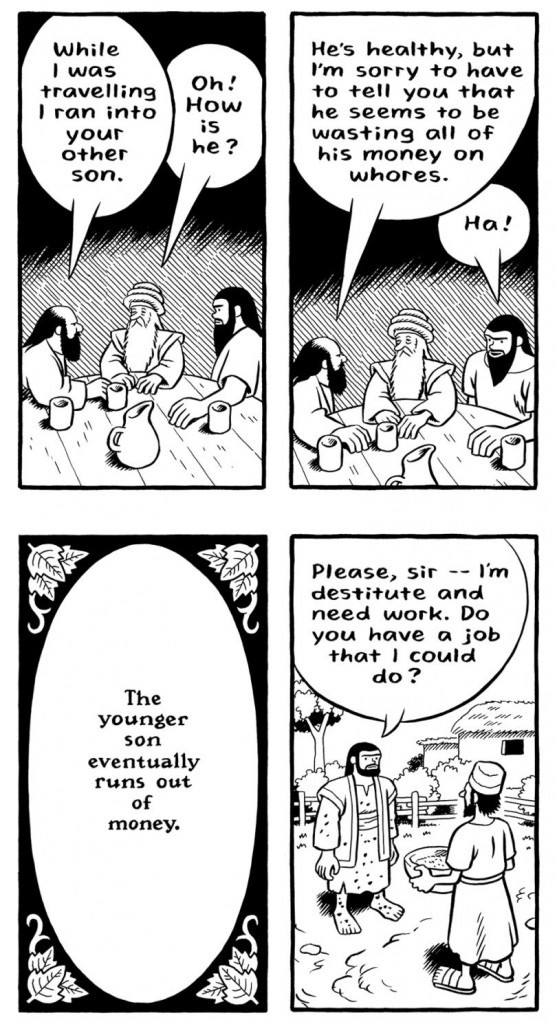 And again Brown tackles what could very easily be exploitative material in lesser hands with his customary dexterity and thoughtfulness. Indeed throughout this entire book there is a genuine impression of Brown looking at some of the issues he raises and considering them, not just taking the standard interpretations of Gospel material, but presenting a selection of example tales – Cain and Abel, the Talents, Job Bathsheba, Ruth and more – allowing the reader to absorb them and start forming their own impressions, then, in an expansive Notes section going into far more detail about why he selected those tales and what his own reading has lead him to think about what lesson they really are trying to convey. And I have to say that I often found this latter part even more fascinating than the comic adaptation of the Biblical stories. 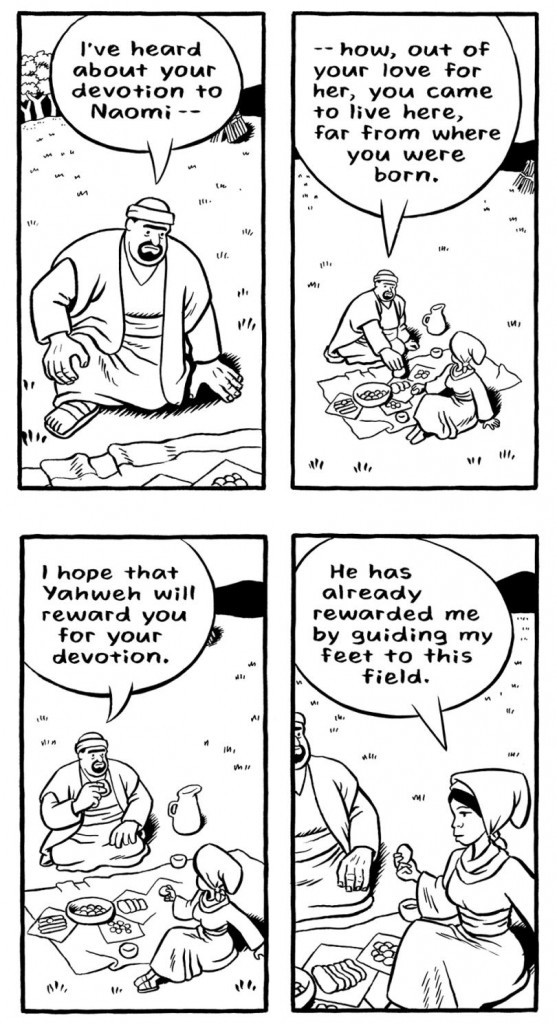 That is no slight on Brown’s comicking ability, by the way – I love his style; the deceptively simple, mostly four-panel layout and the way he retains a cartoonish look but still packs a huge amount of expression into his characters’ face, making them much more relatable and believable and human. And of course those fascinating Notes wouldn’t make much sense without the context he prepares first with the actual comic strips. But it is clear from the Notes how much thought and study has gone into which tales Brown has chosen here to illuminate his chosen topics of obedience, morality, responsibility, gender roles, sex and prostitution. The Notes have extensive bibliographic references to the source books he has drawn from for inspiration, including, to his credit, some that he doesn’t necessarily agree with, but includes their reasoning and argument, which adds balance but also again prompts the reader to think more about their own assumptions, which is never a bad thing. 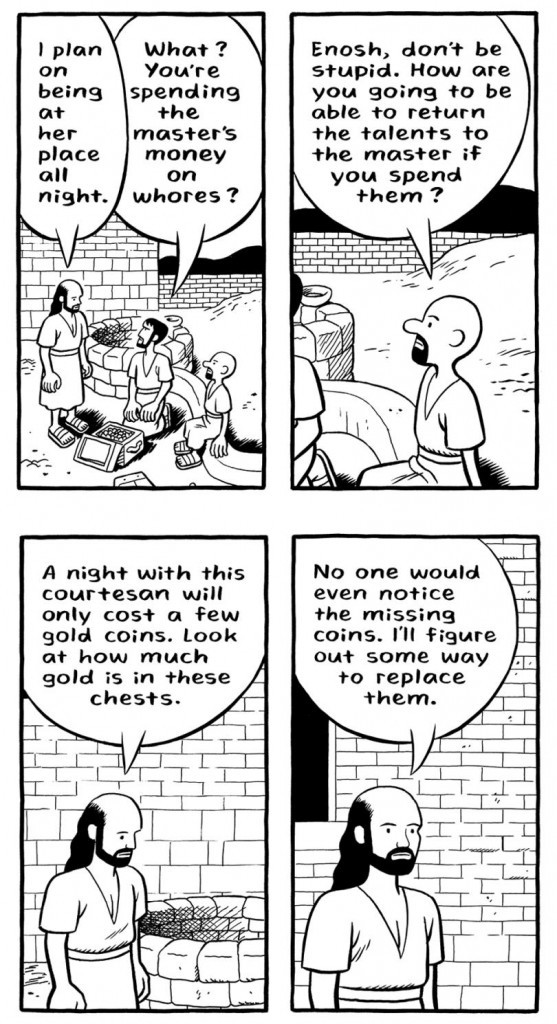 (the parable of the Talents) 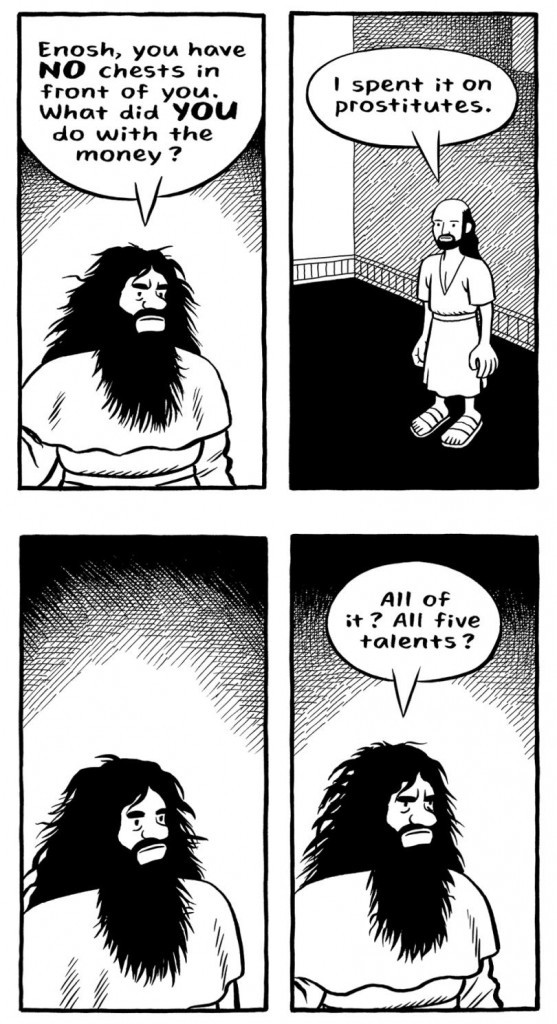 I’ve little time for religion myself – my interest in it isn’t theological or a matter of faith, but  pretty much the same as the interest I’ve always had in the stories of the Olympian gods, or Norse pantheon, or the gods of the Mayans or Aztecs.  I’m more fascinated by what the worship of these beings and the stories constructed around them to explain what they are and why they do what they do says about human nature and our attempts to explain the world around us, and also to try and codify a coherent shared structure of beliefs and rules that can help shape and bind a society (for both good and ill). And of course quite often some of these are also just pretty interesting stories – the best of them, like many other good stories of all types, still holding relevance to today. The gender issues raised here are especially still of much relevance to our modern society, and you’d think by 2016 it shouldn’t be (come on, two thousand years later!), but sadly yes, it is and so it’s a good thing authors like Brown are highlighting them again, reminding us we’ve still a long way to go in improving ourselves and how we deal with others. Going back to a time when women were almost just property, where they had to rely on “a good match”, it’s not that far off from some of what you pick up on millennia later in the likes of Jane Austen (not so much the stories, but the position of women, the restricted choices they have to make in a hugely paternalistic society) and other writing from the Modern age.

I often disagreed with both the mainstream and Brown’s own conclusions about the meanings behind some of the stories – as with a lot of religious discussion it is easy to get tied into mental knots attempting to explain the reasoning behind the actions of some (to me totally imaginary) sky-daddy figure, when to me it seemed that, as with the likes of the Olympians, it’s better to just never trust the reasoning by any god because deities seem to change their fickle minds rather too often and then blame poor mortals for any mistakes. But cynical as I am I was still deeply fascinated by the reasoning Brown showed here, and the underlying theme of compassion he clearly has, and found that after reading his fascinating Notes section that I had to go back over each of the strips again several times, feeling as if I was looking at them from a slightly different angle, and that, my friends, is a real gift to a reader, not to convert you to the author’s point of view (and to be fair I doubt that was his intent anyway), but to share with the reader various viewpoints and competing ideas and allowing them to open different perspectives in the reader.