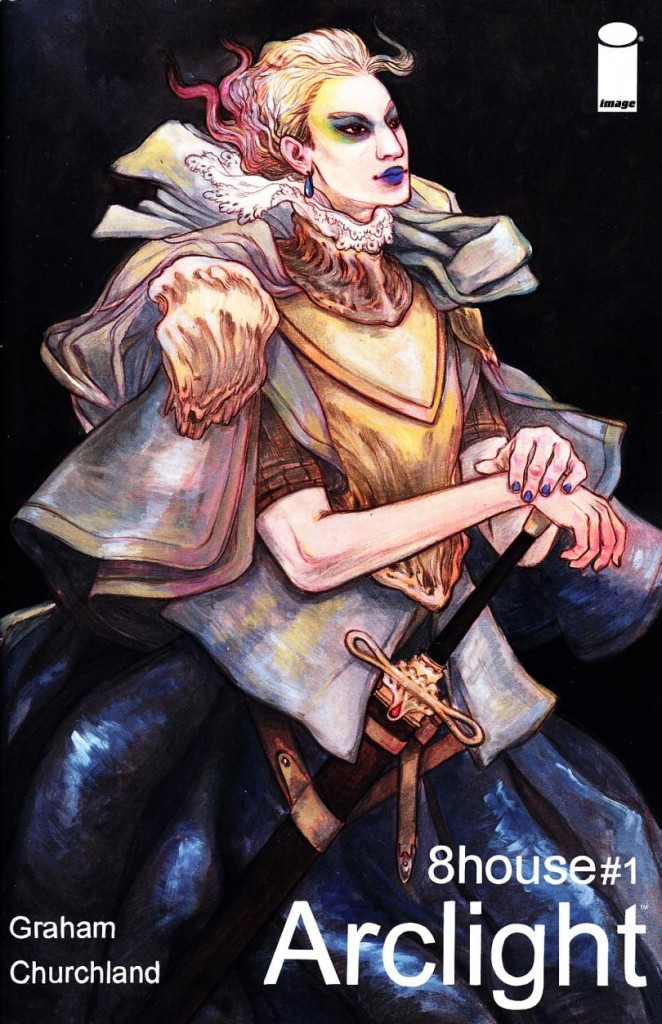 “Shine like an arclight,
Sing like a bird might sing,
When he was higher than heaven,
Higher than every other thing,
Some kind of arclight,
Sparks in the street,
I know that you’ve no answers,
All I need is for you to shine.” Arclight, The Fat Lady Sings

Short review: the most gorgeous looking comic I’ve seen in this week’s releases.

OK, for those who want slightly more than that… It’s the start of another new creator-owned series from Image, and as I’ve noted a a bunch of times recently, they’ve had an impressive record in interesting series over the last few years. And then there was that lovely fantasy cover artwork, an androgynous (almost young Bowie-like) figure in a costume that partakes of bits and pieces from real history but which just screams elegant fantasy. I think I liked this before I even opened the pages, truth be told, between that cover and the familiar old bookseller’s Spidey-sense I sometimes get that just tells me I need to read something even though I know nothing about it.

And then I did open those pages… And oh my… Eschewing the usual inner cover page where all the copyright and publisher and creator information is normally printed, and indeed what would normally be page one of the actual story also not marked by lettering for the writer and artist’s names, this literally opens with a glorious double-page spread, right from the inside cover page, a gorgeous hilly landscape tinged creams and browns and rust and orange and red from the lowering sun. Right from the opening two-pager we’re being immersed into a fantastical realm, and that’s no bad thing. In my book a good fantasy has to win over the reader, make them feel this alternative world, so they feel like they can touch it, feel it, smell it – again I return to using the word “immersed” because, simply, that’s something the best fantasies do. It’s like weaving an enchantment. 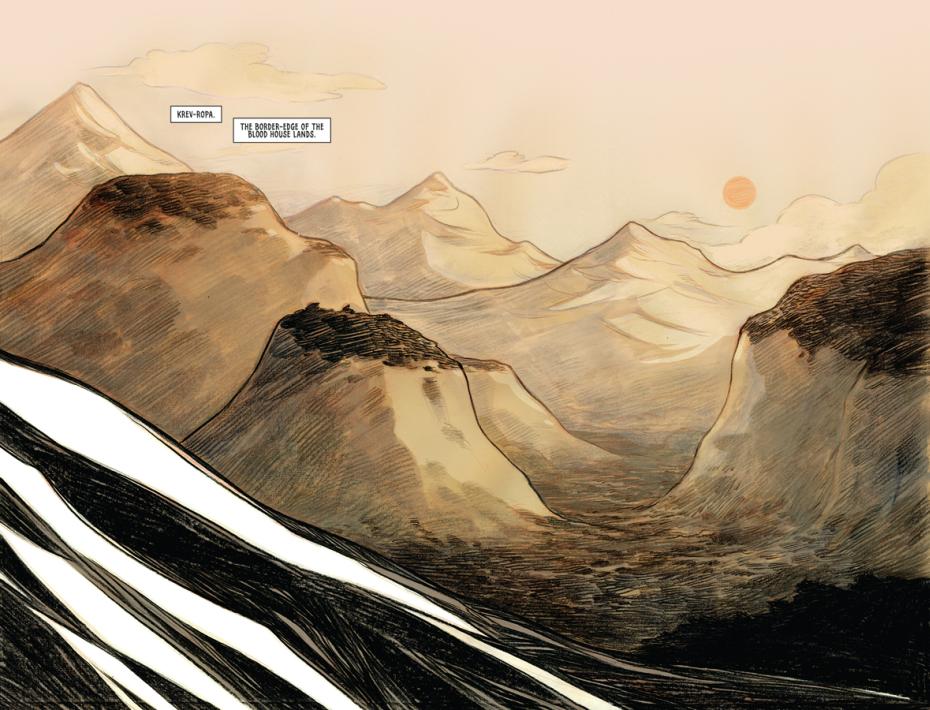 We meet Sir Arclight and the robed, hooded Lady, who have travelled far over those hills and mountains and on into dark forest lands (there should always be some dark forest lands in fantasy and fairy tales, they’re a powerful part of our shared dreamlands), sensing something wrong, something alien, passing through their kingdom. Whatever it is, “it shaped the trees as it passed. It’s big,” observes Arclight, regarding a line of trees bent over to form a tunnel of their branches. Finding a dying border creature the Lady works a spell to keep it alive in the hopes it may reveal something of the strange and unknown magical creature that has passed this way; if they find they have to take action against it, obviously it makes far more sense to have foreknowledge of any potential adversary. They return to the city, Arclight happy, being an urban person, the Lady less so, but it is where she needs to be, so they set off. 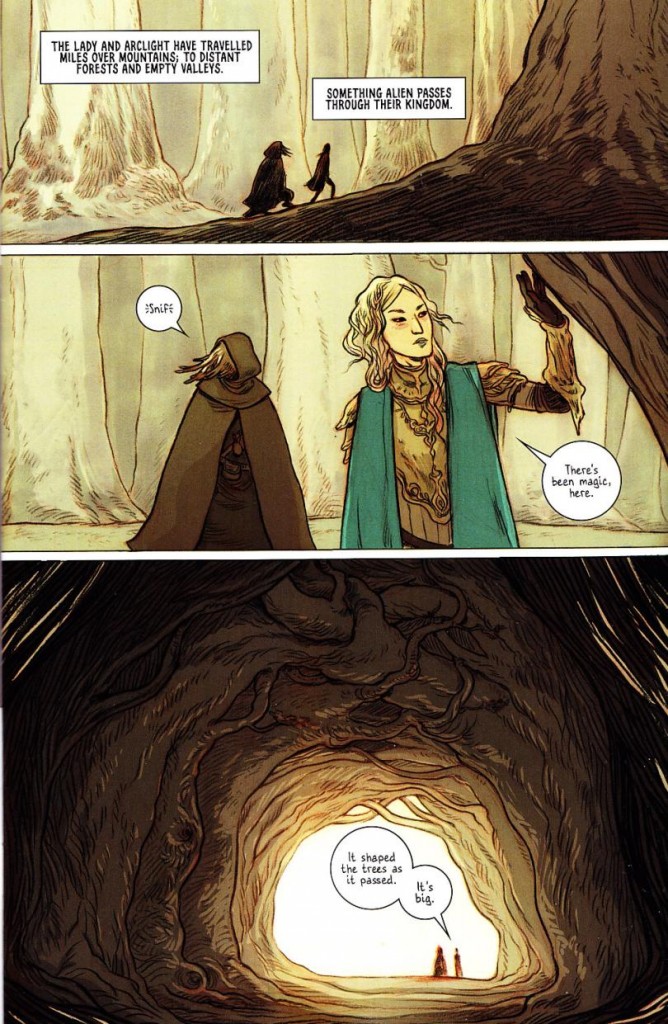 And again we are treated to some wonderful fantasy art from Churchland, with a vast stone bridge spanning a valley, with great stone staircases to lead one up or down from it, the design seems to hint at an overland cousin to the great stone stairs and bridges inside the Mines of Moria, while the straightness and length recall the marvels of the mighty Roman aquaducts. And then another double-page spread, Lady and Arclight on this great, straight stone line of bridge, the landscape below and beyond spread out and the walled city with towers and spires and domes rising from the plains, the sun hanging behind. I remember back when I would pick up each monthly issue of The Sandman, and how even though I was eager to read quickly through the next part of the tale after waiting for a month I would still often be brought to a halt by certain scenes, the art just so beautiful my reading would pause and I would simply drink it all in, feasting like an art-vampire who hungered for paints instead of blood. And it’s a truly wonderful feeling when that happens.

It’s also very hard to articulate exactly why some pages can stop you like that and leave you simply wallowing in an emotional warm state. It’s like when you read a perfectly crafted stanza of poetry, or a prose line that was shaped just right, or hear certain lyrics, they stop us because they have an emotional resonance above and beyond the cognitive aspect of reading and understanding, yet they are an intuitive component of reading, and they richly compliment the more logical parts of our brains which are interpreting the actual narrative, the story’s rhythm, perhaps, to its melody, neither part whole without a feeling, a grasp of the other. You can try to say why exactly certain pieces do that to you, and talk of the phrasing, the colouring, the imagery, but really it is simpler than all of that, the part of your mind which is where stories and storytelling dwell (and humans are creatures of story, our language makes us so, even though many seem to let that remarkable gift atrophy), it chimes at such moments, in sympathetic resonance; you just know and feel it. 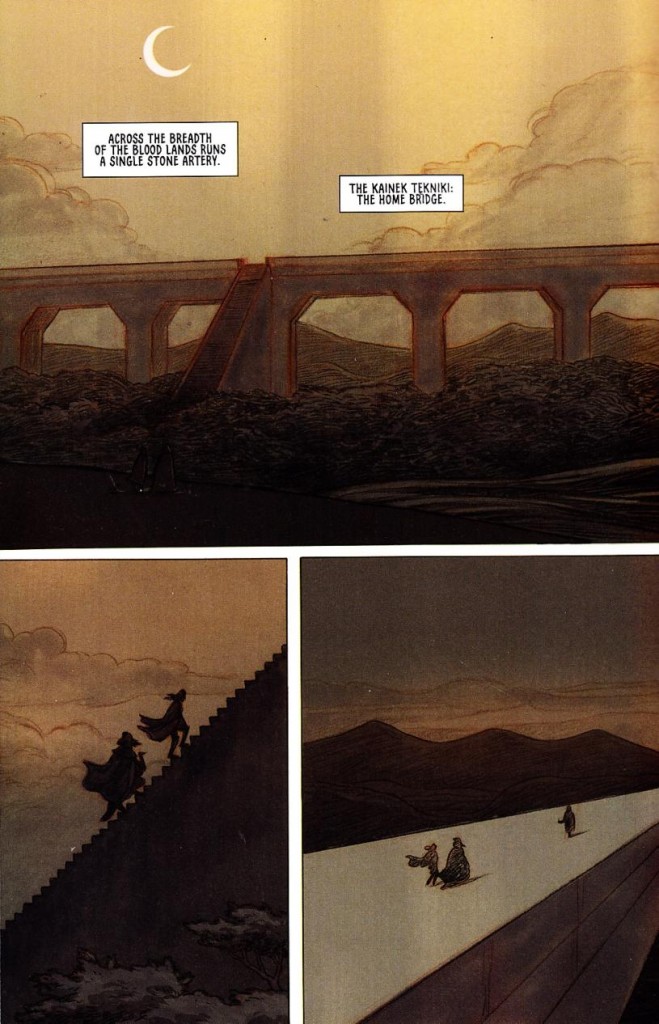 The pace of the story here is slow, almost languid, and that suits it perfectly – this shouldn’t be rushed, we should be slowly immersing ourselves into this world as we would into a cool pool on a hot day. We only find out fragments here, hints more than anything, of what may be going on that has piqued Lady and Arclight’s attention, and also who and what they are, with small glimpses of their lives in the city to hint that they may not be all that they once were, but we don’t know the bones of any of it yet. And that suits me just fine – there is nothing wrong with packing a whole lot into an opening issue and I’ve read many terrific series that started that way and left me impressed with how much they accomplished in a small space of pages. But this feels like it needs to go more slowly, let the reader breathe, absorb colour and feeling and fuller understanding and explanation will follow. I think it is also a mark that Graham and Churchland are treating their readers as intelligent, that those who get it will understand the pacing, that this beautiful but slow opening is just a precursor, an overture to the great symphony to come, and it’s always rewarding as a reader when you feel the author and artist are colluding with you, that they expect your interpretation of their pages to be an important part of how a tale will look and feel.