The Wolf of Baghdad,
Carol Isaacs (aka The Surreal McCoy),
Myriad Editions 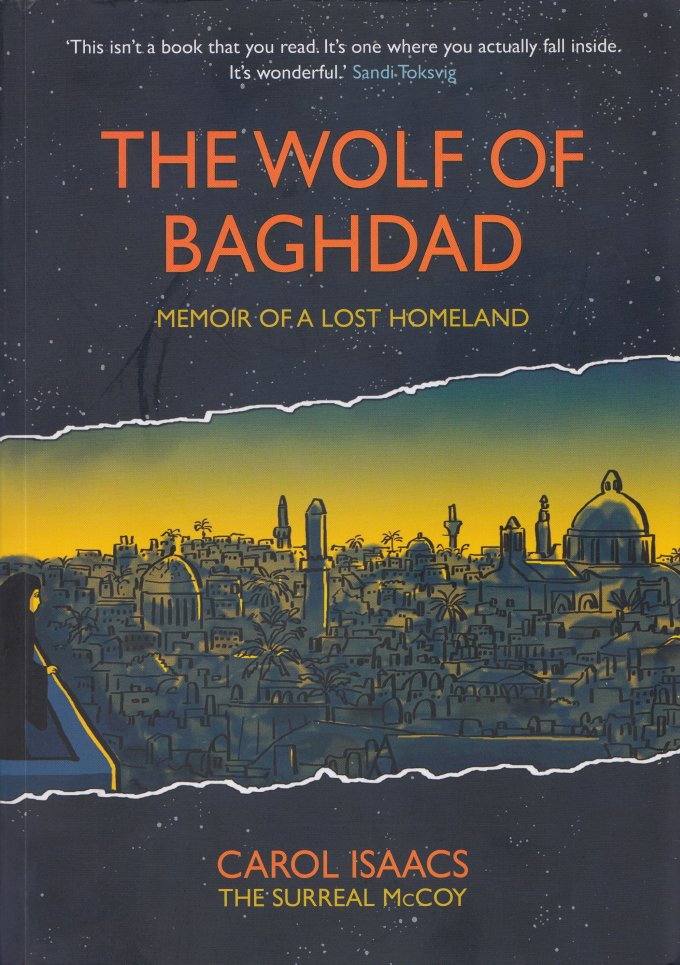 The Wolf of Baghdad opens a world away, with an aerial shot of London, our opening perspective a view over the Thames with many globally famous landmarks visible, from the old like Tower Bridge to the new, like the towering Shard. Over this splash page musical notes float languorously in little bubbles of their own. We follow this warm stream of music floating through the London air, across the cityscape, from the dome of Saint Paul’s to regular, the open space of parkland, then urban residential streets, until we find the source, in a woman’s living room. She is sitting alone, listening to the music coming forth from her stereo, lost in thoughts and reveries, the music sparking images of other times, other places, other people, now long gone, vanished into history.

Or no, not vanished. They live now in her memories, in the stories passed down through her family and their friends, in the music of those days, and in the box of photographs she is reaching for on top of her bookcase. She falls asleep on the sofa, photos strewn over her body. She wakes with a start, there is someone sitting in the armchair next to her. An old lady knitting. Except she’s not really there, she’s a projection, a ghost, summoned from her memories roused by the songs and the family photographs. Isaacs beautifully captures in a couple of small, brief panels, the emotion on her face, from shock at finding someone else in her home to the sheer delight at recognising a beloved family member to the disappointment that no, she isn’t really there, this is a dream, an echo. 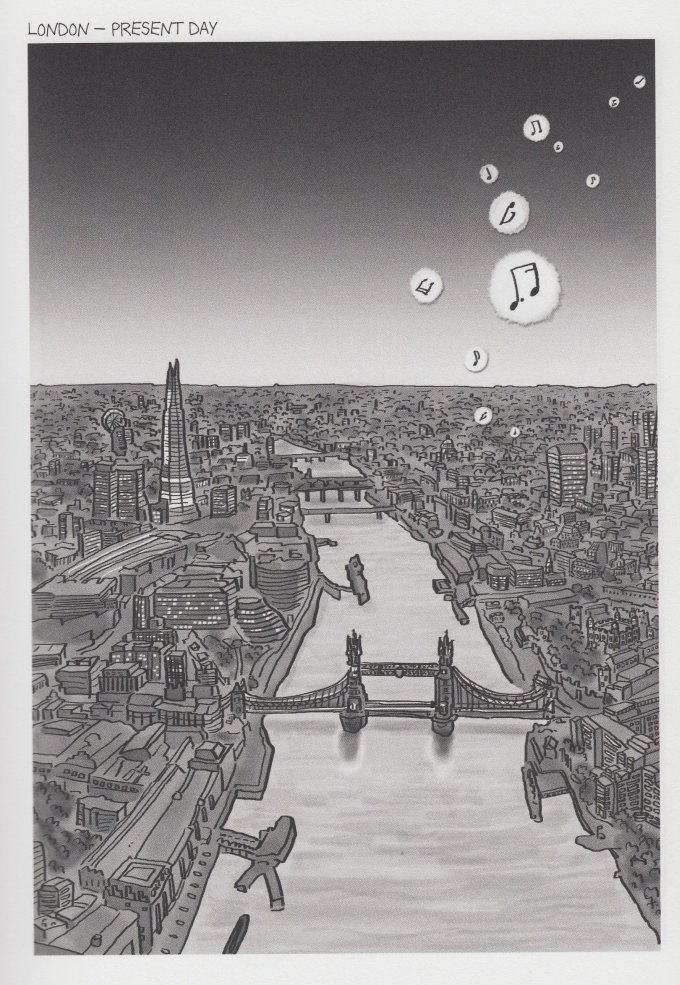 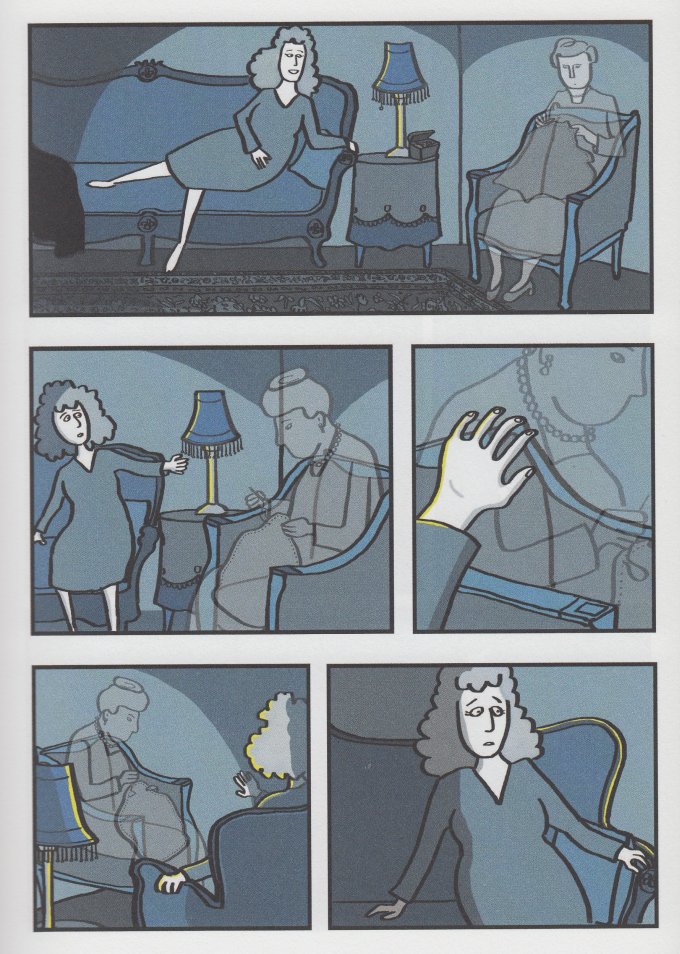 I think many of us who have endured loss will feel the emotions of that seemingly simple scene deeply – how many of us have dreamed we’re walking with a long-gone loved one, woken smiling only to remember they’re gone and it was just a dream, that this is the only place they now live for us. Isaacs weaves this irresistible mixture of longing, of the happy warmth of memories, and the disappointment of the reality, the contrasting emotions contrasting and yet also in that peculiar way life manages, complimentary to each other.

Isaacs rises from her chair, leaving her spectral visitor behind, donning her grandmother’s old cape she would always wear outside the home, stepping through her front door, but not into her own apartment block, but the old family home in early 1900s Baghdad. She walks through the kitchen, the heart of any household, and ghostly, translucent images of the people who lived there – her people, her family – move around her, oblivious. It seemed to me that they were not the ghosts, but actually Isaacs herself was now the invisible phantom, a ghost from the future walking unseen through her own family past.

These scenes are lovely, warm, inviting – the family house, like many in the Middle East, built around an open courtyard so the family could sit outdoors in the heat but still be within the home. She passes her Rabbi grandfather’s study – a sudden splash of inviting, warm yellow colour spills out of the mostly blue palette of these pages, the lamp-light he is contentedly reading by, and on to the roof, which like many buildings in the region is flat, so that on hot nights the entire family, from baby in the crib to grandmother could sleep outside, under the starlight. This also affords Isaacs the perfect excuse to delight the reader with the glories of sunrise over the domes and minarets of early 1900s Baghdad, seen from the roof of the family house. 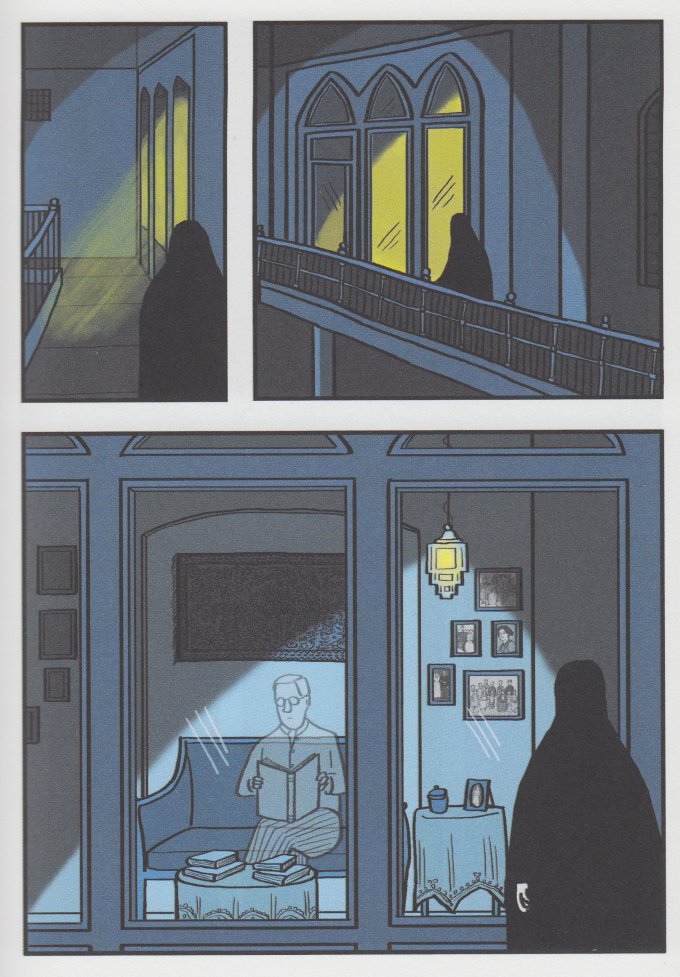 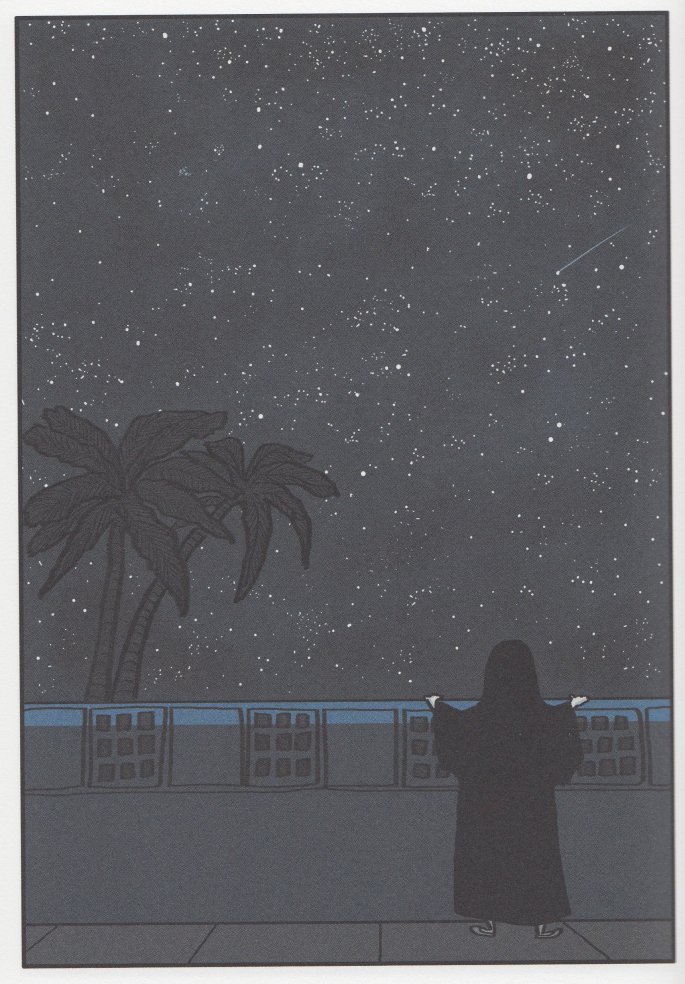 The view of the waking city entices Isaacs to venture outside into the bustling city streets, where Muslims and Jews and Christians all mingle. There are beautiful little details – a street urchin sneaking food from a street stall, a small child tugging on his mother’s hand when he sees a vendor selling sweet treats, the old men playing their games in the cafe, the bustle and life of the soukh,. The many other little details that bring it to life and make it so wonderfully personal and intimate – the children learning to swim in the Tigris (imagine your swimming pool being this great world river that has flowed past thousands of years of human civilisations growing around its banks), or being carried over the regularly overflowing small alleyways to get to school. 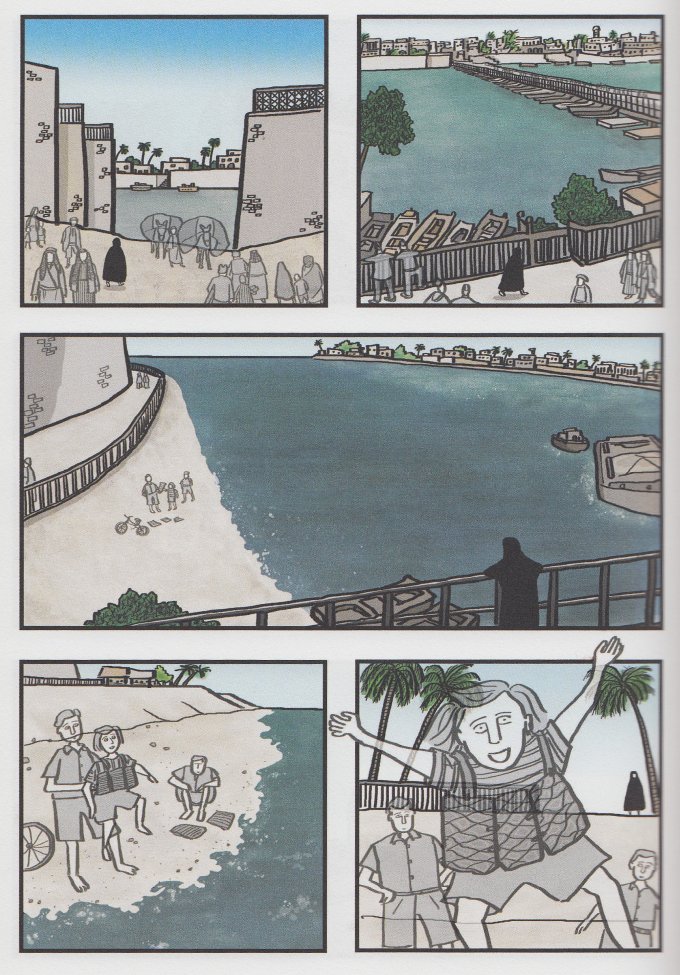 Despite Jewish people having lived in Baghdad since they were first captured and taken to ancient Babylon – a history of over two and a half millennia – sadly this will not last, and the latter part of the book sees our spectral narrator walking through the shadows of growing threats, shadows which soon grow into full-formed nightmares of hatred, killing, pogroms, as a rising Arab nationalism is fuelled in the 1930s and 40s by imported anti-Semitic rhetoric from distant Nazi Germany. It’s heartbreaking and sadly a story which has, in one form or another, happened far too often throughout human history.

We see the burnings and the beatings and the disappearances into dark jails. Again Isaacs conjures panels that pull forth the emotion of those moments, such as a scene showing her walking through the ransacked mess of what had been the family home, picking up a shattered photo frame, the people now all just silhouettes, or finding a torn Torah in the Synagogue.

From being almost a third of the population, through the 1940s and 50s and on most Jews were forced to flee forever, that history that had lasted millennia gone – today there are, perhaps, around half a dozen left in that ancient city.

Isaacs includes a lovely Afterword, which originally appeared in the Strumpet (which I am sure some of you will remember fondly), detailing some of her own memories this time, of family life when she was a wee girl, the family now settled in Britain. The regular suburbia is broken each month when visitors come from the old country to visit, bringing gifts and stories, her house-proud mother budding the family silver to a shine and creating a mountain of delicious food, the family friends so well-known they children would always refer to them as aunt or uncle – all small details which most of us probably also share from our childhood. And the hints of the past these visitors brought with them to suburban Britain, of the home now lost to them which they can never return to, but which haunts their dreams. 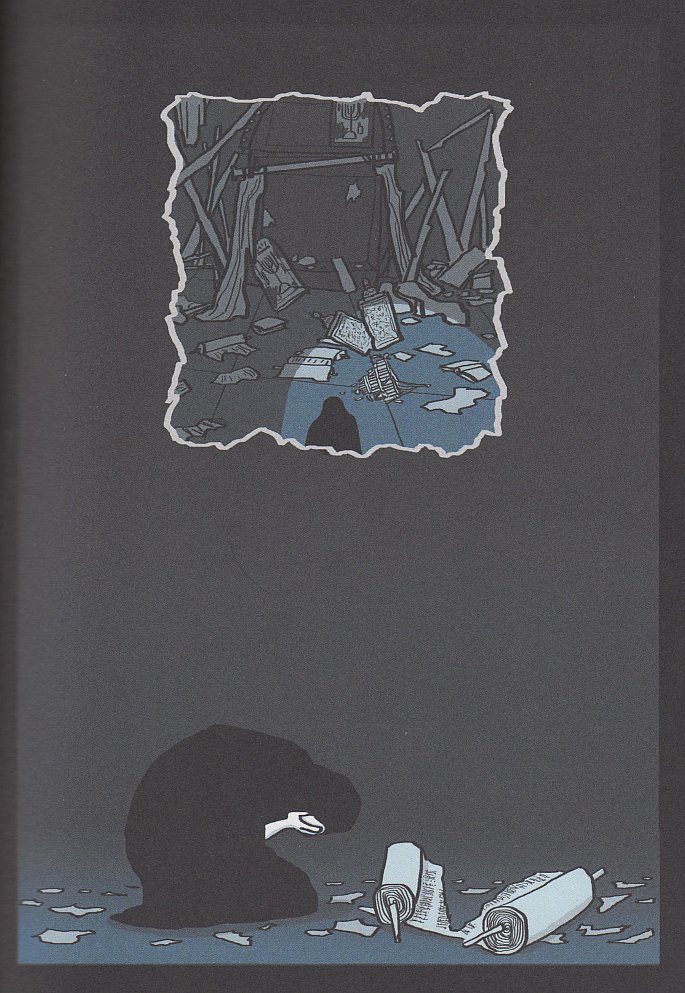 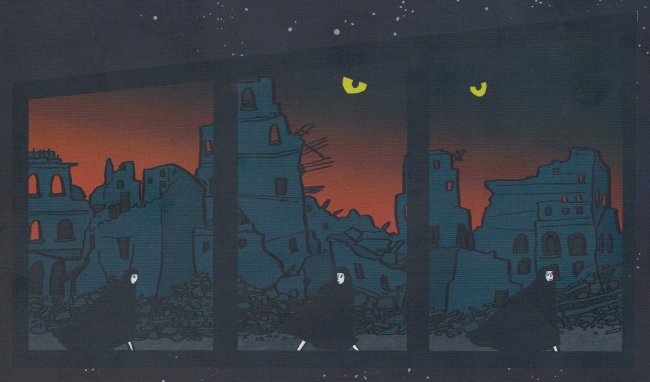 And the eponymous wolf of the title? An old Jewish tradition in Baghdad was that the wolf would protect the household, watch over the family, that any malicious Djinn would be too scared of the powerful wolf to dare to enter the house or harm those within. A wolf’s tooth would often be set in a small jewel to hang over the baby’s crib as a protection. Sadly, as Bardach observed many years ago, “man is wolf to man”, and despite appearances the man-wolf has a far more terrible bite than any canis lupus, even a mythical one unable to protect the family from the storm that befell the Jews of Baghdad. (or, perhaps the wolf did watch over them, seeing them to their new home, perhaps his glowing eyes still look after them as best he can in a strange land).

This is a remarkable book and, despite the horrors of the later section, ultimately it is a beautifully-crafted, warmly emotional work. While it sheds light on a period and events most of us, even those of us who read a lot of history, will not be familiar with (always good to learn), mostly, I felt, this was ultimately a very personal, very intimate story, and the warmth of memories, of family, of love and hearth and home outweigh even the darker moments, with Isaacs’s artwork deftly expressing and conveying much emotional richness.