It’s 1775 and the world, as one commentator of the time noted, was being turned upside down. Revolution is brewing among the colonists of the thirteen British colonies in America, a gathering storm that will not only take in the military (with spectacular wins and blunders by both sides) but the political and ideological (not just freedom from imperial rule but democratic, republican rule – well, for the men, anyway, not the women or the slaves, but that’s another historical discussion). Something new in a world which has often known turmoil, and out of this will eventually rise an enormously powerful nation, stretching from “sea to shining sea”.

But as Rebels starts no-one could predict that destiny. Some are protesting British rule and taxes, others only want the tax regime altered but remain a loyalty to the crown (a loyalty the crown doesn’t seem to reciprocate), others are in open revolt, even men who only a few years before willingly fought against the French with the British troops in North America, here now taking up arms against those same redcoats. And others are remote from it, like young Seth Abbot, working on his family farm, seen in flashbacks in the opening pages, where he comments how his father almost never spoke more than a couple of words to him at a time. Until one day he takes him into the woods with a group of other men, teaching him woodcraft and hunting skills, how to see in a mass of trees and other vegetation and pick out his target. In this case British redcoats, sent to remove them and neighbouring farmers from their land. It’s a pivotal moment for the young Seth and symbolic of how some militia groups on the revolutionary side combated the superior power of the British army with their intimate knowledge of the countryside (some with great efficiency, their tactics still studied at military academies to this day). 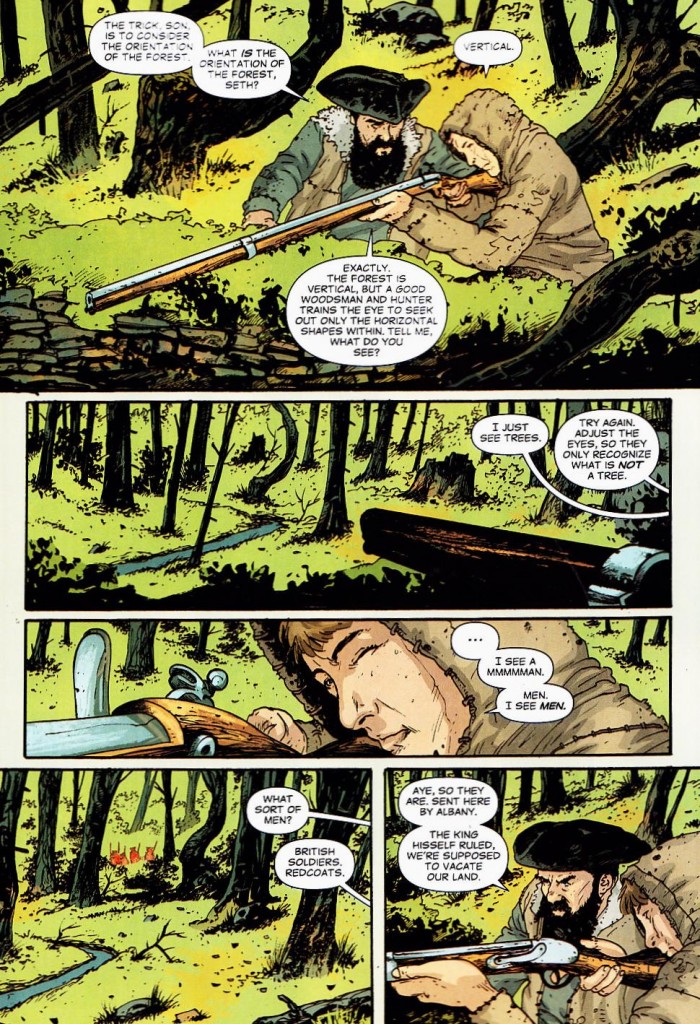 Moving forward a few years we see Seth, now in the company of his best friend, Ezekiel, who by coincidence had been the young messenger boy among the redcoats Seth’s father attacked in the earlier scene (the young lad was spared since he wasn’t a soldier doing anything to them, he promptly follows the rebels instead). “He was one of us now. A New Hampshire man. And a brother to me,” Seth recalls in his adult years. Returning from a mission they pause on the edge of the Tucker’s farm where we’re introduced to Mercy Tucker, who will be important later on in Seth’s life, a farm lass who’s not afraid to pick up a musket herself. They learn from her that the crown has been forcing more unwanted attentions on the locals and her father has had to sign away his land, becoming a tenant on what was his own property, living in shame but unable to do anything about it. Seth and Ezekiel promise to get the document back and visit the local town of Westminster’s courthouse, only to find redcoats stopping any more citizens going in, while a group of disgruntled farmers, there to protest the taking of their land, are trapped inside. Violence is in the air and it’s clear that soon blood is going to be spilled…

I’ve admired Brian Wood’s work for a number of years, especially Demo, DMZ and Channel Zero, and it is interesting to see him taking a historical slant on some of his regular themes such as politics here. Especially given how radical and important some of the political ideas that came out of the revolution would be. In a nice move he’s not going for the grand moments and big players of the wars of independence here, he’s deliberately showing us local events that had global importance and effects, and how everyday, ordinary people were caught up in those events, often the most unlikely people to become revolutionaries, but time and circumstances can put us all through changes. And while we remember the big names like Washington or Ben Franklin, it’s that citizen army and the civilians who backed them who actually did the dirty spade work of changing the course of world events. Ordinary people, people just like the rest of us, forced into extraordinary times and actions, Mutti capturing the everyday with the sudden bursts of action, his art contrasting the local rural population with the uniformed, disciplined redcoats. 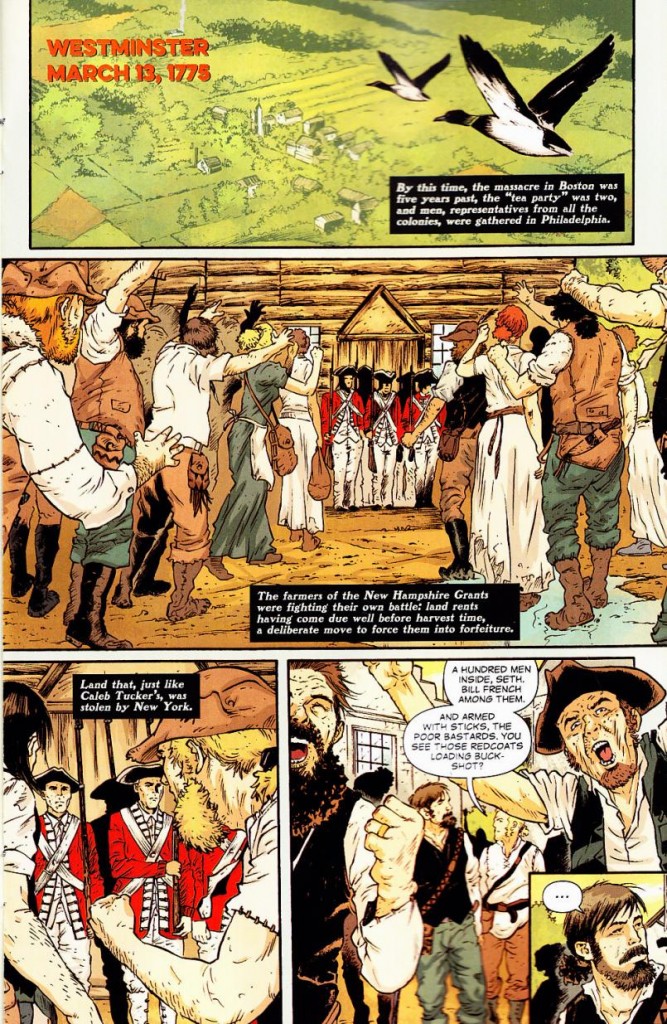 Wood explains in the first issue that some of the settings come from his memories of his own Vermont childhood, playing in similar woods and the history he was taught at school filling his head. Although I should add he mentions at the start that he may take some odd liberties with the actual history to make the stories in Rebels work – but this is a story, not a history book, albeit a story steeped in American history (for those of you with a yen to learn more about this fascinating period, which helped shape the world we live in now, I commend the exceptionally fine Revolutions podcast, which has an entire series on the American Revolution). I’ve a deep love of history, and as an aside I enjoy a decent foray into historical fiction too, if done right, and here it is done right, Wood and Mutti portraying the way much of the American situation was escalated from formerly loyal subjects to all out war not so much by grand strategy leading to an inevitable conclusion, but but endless, foolish rules and unfair pronouncements, building up resentment after resentment until boiling point was reached, with enormous consequences. An interesting introduction, done on a personal level that gives us our empathic ‘in’ to huge events happening around our characters.