A Matter of Life, 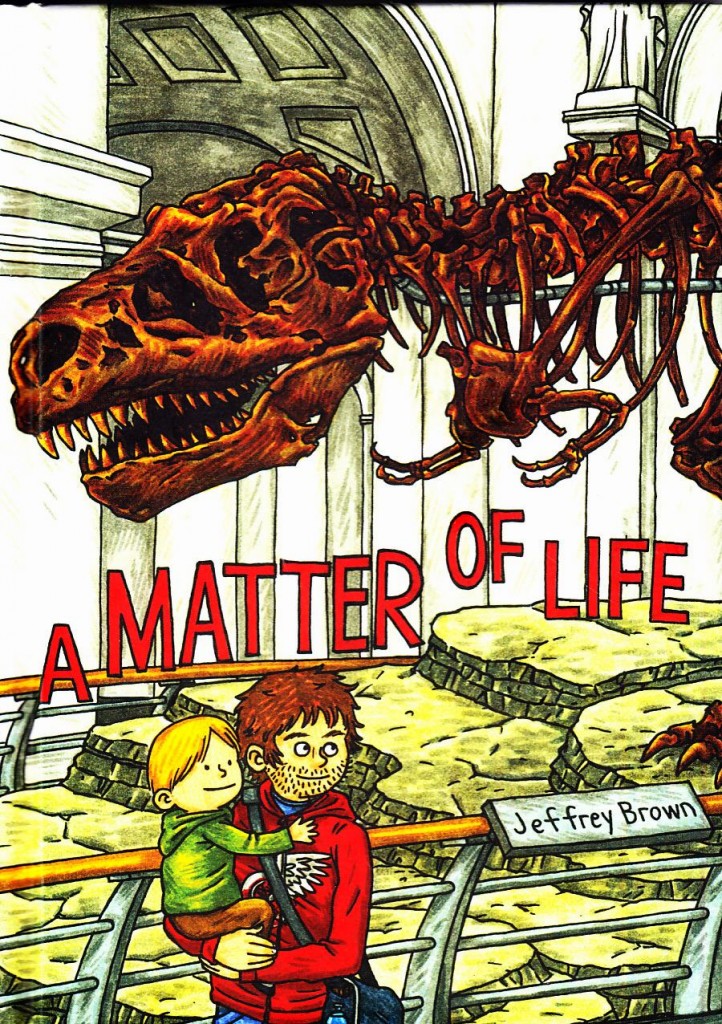 American cartoonist Jeff Brown has been a bit of a favourite with many of us here for several years. In recent years he’s expanded his audience with some delightful all-ages Star Wars parodies imagining Darth Vader actually trying to be a dad to Luke and Leia, but he remains best known (and loved) for his bittersweet autobiographic works. Yes, I know, Indy cartoonist doing autobiographic comics is almost a cliché these days, but for me Brown always stands out with his simple but elegant and effective style and voice – he’s one of those creators that the minute a new book is announced you know you’re going to have to read it.

In this recent book he turns his attention to family matters, mostly the men of the Brown family – himself, of course, but also his father and his own wee boy. Eschewing the regular chronological approach, instead A Matter of Life (I’m guessing the title is a nod to the classic Brit fantasy A Matter of Life and Death) offers up several snapshots of life in the Brown household – we can go from a very young Jeff at school or church (lot of church scenes, his dad being a minister) to adult Jeff with wife and child of his own, or back to high school or college age Jeff. The theme that ties these short scenes together is little glimpses into formative moments – all those little things (and the odd Big Thing, good or bad) that makes up this funny old thing called Life that we all deal with.

Brown is always quite honest, rarely trying to revise his personal history to make himself look better – instead he offers it up, warts and all. There he is as a kid in Bible study class or church youth group holding forth about the meaning of events in the Bible or God’s intentions, but in the commentary present day Jeff is noting that he wasn’t really that clever and most of this was stuff he had heard from his dad and his fellow ministers or read somewhere, repeated now as if he’d thought it up himself. Or a bit older and now at college and realising that an old school friend who writes to him a lot isn’t just being friendly but is actually gay and in love with him, and the cold way he responds, not from homophobia as such, just from being socially awkward and too young to know better. Some elements will be familiar to many readers – being young and curious about sex but not having a clue, and this being pre-internet youth no real way to find out. One sheltered girl in class is teased for asking what a condom is during a sexual health class, while teenaged Jeff sits at the back thinking “what’s this oral sex thing they’re talking about?” Or there are those awkward moments when shared aspects of family life you took for granted as a kid simply fade as you get older and become your own person – in his case religion becoming increasingly remote to him, failing to make sense any more, while his parents are still firm church-goers (and indeed his dad is a preacher) but he stops going and eventually decides he doesn’t believe anymore (leading to a delightfully surreal moment about feeling Jesus in your heart – taken literally with a tiny wee Jesus standing in his heart calling out “Jeff?”). 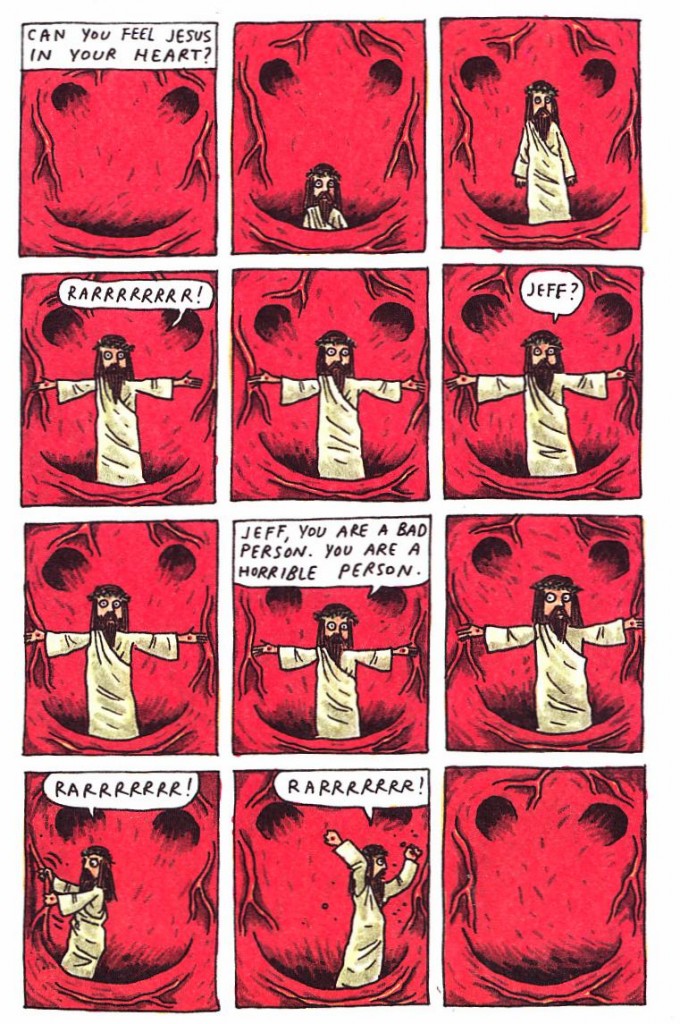 Like all of life there are happy moments and sad moments – his dad becoming ill, so slowly, gradually that they don’t realise the seriousness of his ailment at first and that horrible dawning that a loved one is going to die and there is nothing you can do about it. Then being a dad himself and having to explain to his wee boy about it all, that one day he and mummy will be gone, that one day, hopefully when he is very old, he too will go. It’s pretty emotional, suddenly brightened as his wee lad, understandably upset, suddenly declares I know, I’ll fight Death, daddy! And suddenly the now sombre dad is grinning again because of his wee boy. 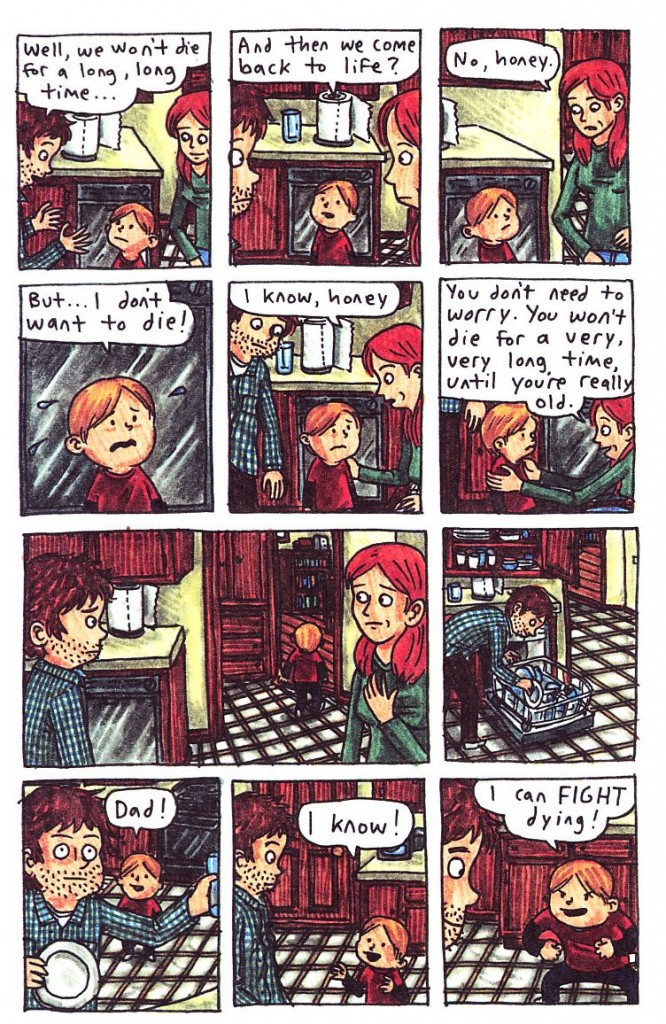 Or simple little things like his mum telling him that music he listens to is just a noise and he’ll never listen to it when he is older – young Jeff adamant he will love that music forever, the way you do with your music when you are a teen. And then admitting years later as an adult that his mum was right… Or warnings by some in his church that heavy metal music and science fiction books would lead to the Dark Side – quite why reading Douglas Adams would lead you to Satan’s service is beyond me (may lead one to the Evil Demon of Missed Deadlines, of course), and Jeff takes a shot at this narrow minded view in fairly gentle yet effective fashion with his younger self thinking “I guess I shouldn’t let them know I play Dungeons & Dragons...” 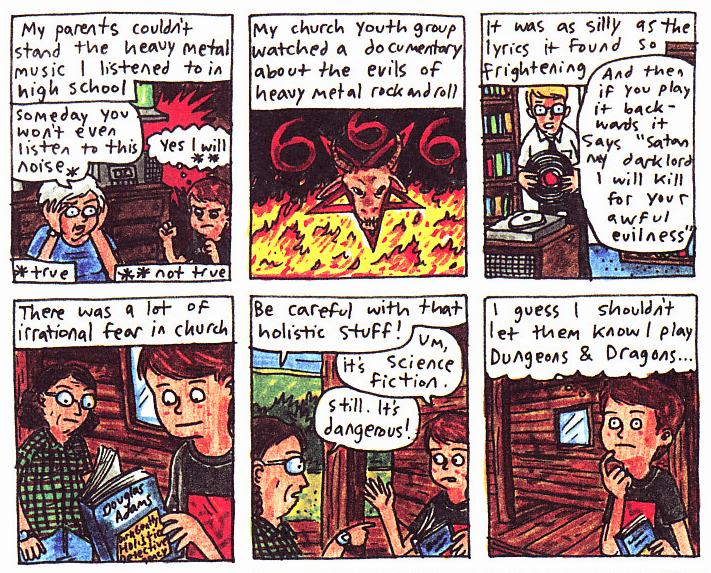 And that’s the way it rolls, little vignettes from different parts of Brown’s life and his family’s, the little mysteries when you are a child, wondering, the bigger mysteries that puzzle you as an adult, the stupid things you did from awkwardness, or things you said without thinking when younger and brasher and look back at now and wince. Lots of little moments and then the odd bigger ones, but each leaving a mark, each shaping the person you will become. Then being a parent himself and thinking how on Earth did my mum and dad manage, this is the hardest thing in the world?! And there’s more of that Life stuff just starting out again with the new little Brown, all told in his quite gentle, honest manner. Jeff Brown is one of those comics creators that any decent collection requires on its shelves, and this 2013 slice of life is a perfect way in for those new to his work and a welcome addition to his previous work for the established fans.