January 1st marked the 200th anniversary of one of the first and most influential works of science fiction and horror, Mary Shelley’s Frankenstein, or The Modern Prometheus, first published, anonymously, in January of 1818 by the small press of Lackington, Hughes, Harding, Mavor & Jones, a run of only 500 copies. Two hundred years on and Frankenstein remains unbelievably influential, in storytelling, as a cautionary note in scientific research, of the dangers and responsibilities of human knowledge and abilities. Of all the books ever published over the centuries many, even those which were huge bestsellers in their day, fall into obscurity, remembered only on the odd literary course. A few, a very few, achieve a form of literary immortality, remaining in print, still read, translated into other languages for even more readers around the world. 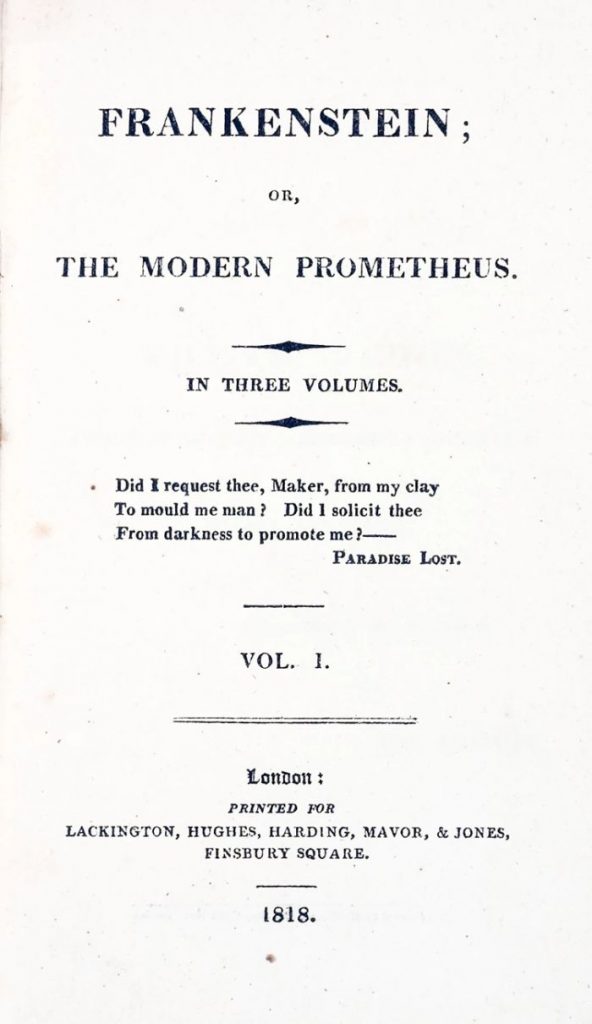 And of those few only a handful penetrate and suffuse the popular culture to such an extent that ideas and terms from the books are borrowed regularly and used even by those who haven’t read the novel, but who are still aware of what the ideas are. We are still, to this day, borrowing from Shelley’s novel – when reporters write a piece on genetic modification, her creature is evoked: GM crops become “Frankenfoods”, the possibility of genetic manipulation of the building blocks of our human DNA raises dire warnings drawn from Victor Frankenstein and his unfortunate creature (Frankenstein is tormented by visions of any female mate he makes for his creature joining with him to breed a new race that would outstrip by design mere, naturally evolved humanity). These also go hand in hand with worries about the pace of discovery and advancement, which often seem to move to fast for us to adapt to and outstrip our ability to moralise and legislate upon – the Universal film’s cry of “In the name of God. Now I know what it feels like to be God!” remains a pertinent warning to us that we always need to consider what we are doing and why.

In part this is due not just to the longevity of the original novel, but the way it and its themes have drawn other creators to adapt it, or to be influenced by it, for other media. Within just a few years of publication Frankenstein was on the stage. In the dim, early days of flickering light from the first motion picture cameras, the Creature was there, right at the beginning of the medium, in a short silent from the Edison Company in 1910. And the, of course, that first golden age of horror film from Universal in the early 30s, bringing us first Lugosi’s Dracula then Karloff’s wonderfully nuanced creature in Frankenstein and the Bride of Frankenstein, with Jack Pierce’s iconic make-up. A couple of decades on and Hammer would revive both Dracula and Frankenstein for a new audience, in colour, with plenty of “Kensington gore”, and another iconic actor in both roles, the great Christopher Lee. Endless film adaptations, even more films and television programmes inspired by the themes in Frankenstein, the new medium of video games, and comics – notably the superbly illustrated work by the late Bernie Wrightson – those classic Aurora famous monsters model kits, even humour (think Herman Munster, or Mel Brooks’s wonderful young Frankenstein), Frankenstein has permeated our culture. 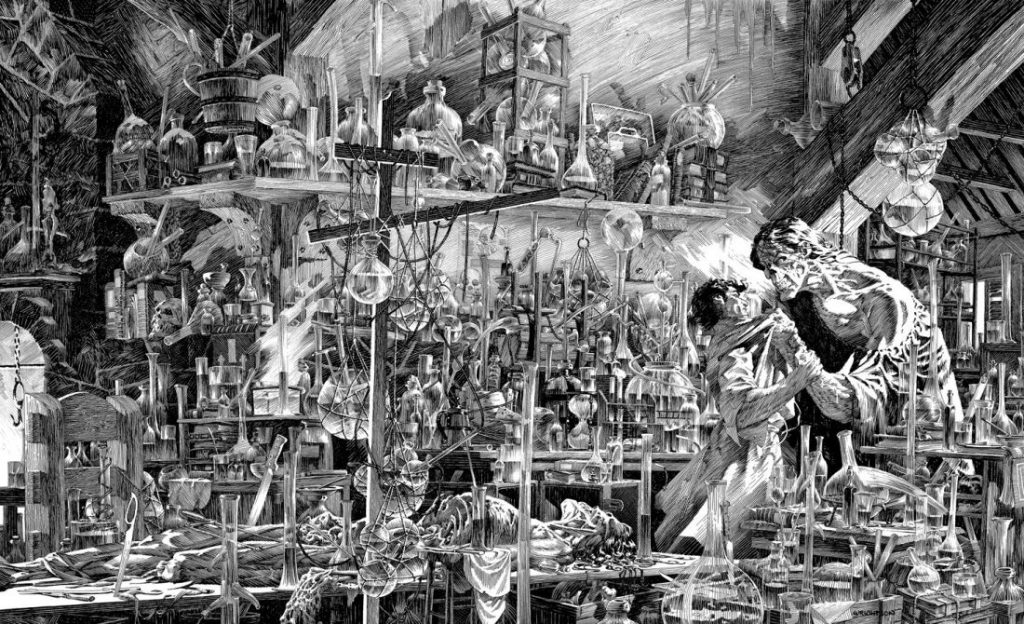 (above, the great Bernie Wrightson’s superbly detailed, iconic comics take on Frankenstein. Below, horror legend Karloff, whose subtle playing through Jack Pierce’s visually iconic make-up, gifted the cinematic monster with humanity, emotion and empathy. Bottom, Johnny Lee Miller and Benedict Cumberbatch in a modern stage version of Frankenstein, in which both actors took it in turns on different nights to play either Victor Frankenstein or the nameless Creature) 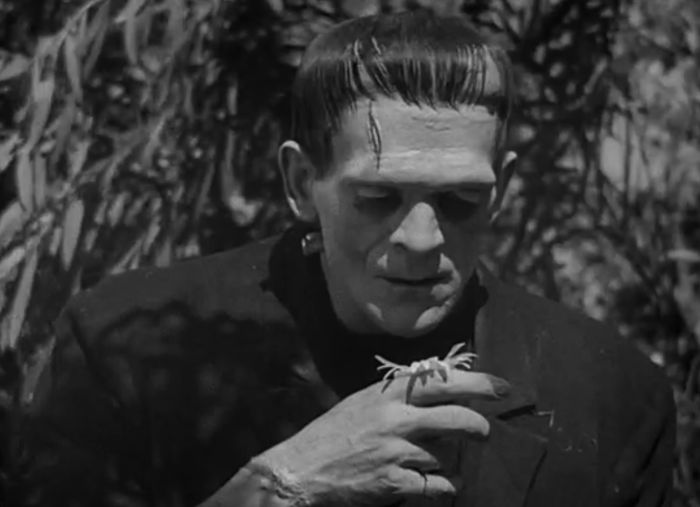 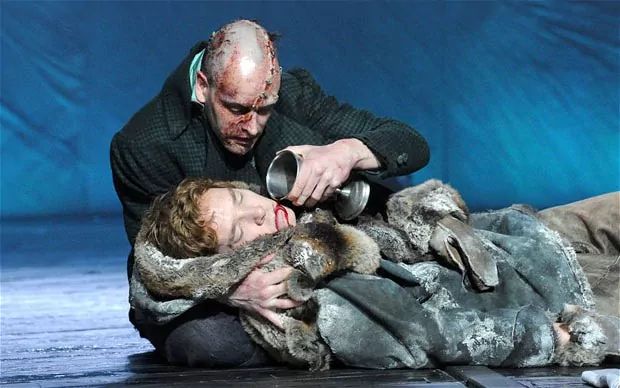 It’s not hard to see why – one of the keys of great writing is that it remains relevant to readers long after the time in which it was written. New decades and new centuries roll on relentlessly, new readers pick up the book and see in its themes comments and warnings applicable to their own contemporary world (again think of the conflation of Frankenstein’s creation with the worries over genetic research today). Of course it isn’t just the theme of humans dabbling in areas they shouldn’t, or the classic “mad scientist” who goes too far just because he can, it’s also the personal elements, the human elements – love, hate, responsibility, life and mortality, the powerlessness we have in the face of the death of loved ones, the duty we have to others, all are aspects of human nature that do not change, and so still resonate with us today. Guillermo Del Toro once described the book as one of the best “teenage” stories ever, as the unfortunate, rejected creature bemoans his state; he never asked to be created, didn’t have a choice in this life, is left rejected and alone and wondering why do I exist, why was I brought into this brutal world, what am I meant do to, what meaning is there to any of this?

We’ve all wondered that, especially in those formative teens years. I was to be your Adam, the creature tells its creator, instead I am your fallen angel. Milton’s Paradise Lost was a major influence on Shelley, the creature wants to be good, but his constant rejection and the fear others show him drives him away; can he be good? He’s not naturally created, does that mean he lacks a soul that God would have given any naturally born person? Does that mean no matter what he tries to do he can never be good, that he will always be a damned creature, except instead of being banished by his Creator to the Pit, he is rejected by his human who tried to steal the fire of creation, banished to the wastelands where no human feet walk, bereft, rejected, alone.

Other elements that remain very relevant to us: the gender roles of men and women – here a man who defies nature by creating life by himself, rather than from the womb of a woman. Is it hubris or is it fear of woman’s sexuality that drives him to try and become a creator of life himself, to take that power of generation for his own? And what does it say about relationships between men and women, about birth, death and creation? Gender even shows in the original publication, the first editions nameless, and while the first couple of editions generated mostly good reviews, some, now aware who wrote it, would sniffily dismiss it as an overwrought work of ‘a woman’, and therefore not worthy of contemplation. Two centuries on and how many women writers, especially in the fantastic fiction fields, have written under names that use only androgynous initials, or a name that could be male or female, because of the publisher’s fear that SF&F by women won’t sell as well? We’re getting past that a bit more now, but it still happens, and we still have a number of female writers who have had to do that to build a readership. Some elements, it seems, will remain with us for quite a while. At least we’re talking about it now. 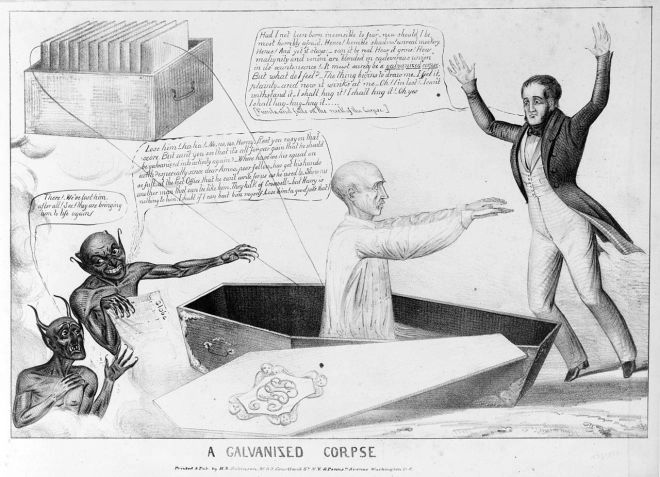 Even the circumstances of the creation of Frankenstein fascinate us. The macabre experiments of Luigi Galvani with early electricity, notably the gruesome public experiment that saw him applying electrodes to the corpse of an executed criminal, creating spasmodic movement, grimacing facial expressions, all in a dead body. What was this power? Could it actually restore animation to the dead? Nobody knew, imaginations ran riot, and some of this is captured in Shelley’s dreams of an artificial being (along with, possibly, a visit to Castle Frankenstein, rumoured to once have been home to an alchemist who tried to find the secrets of life). And bear in mind this is a time when mortality, especially among children, was far higher than today, a sad fact Mary had horrible first hand experience of, even dreaming once that her dead little baby came back to life in her arms as she warmed him by the fire. Oh to have that power… And yet, nature clearly didn’t intend for us to have those powers, what would happen if we did? It all feeds into this rich novel, coming out of a fevered competition between Shelley, her poet husband, Doctor Polidori and Lord Byron as they sat bored in their villa during the “year without a summer”, trying to entertain one another.

Something opened in Mary’s mind that evening, those experiments, her reading of Milton, her own awful losses, all being fed into this story, a story that has lasted two full centuries, and which new readers are still discovering for the first time, and which has inspired countless other science fiction and horror writers across the centuries and continues to do so (what are modern fictional fears of AI outstripping its human creators, if not a modern Frankenstein tale?). If you’ve never actually read it, only watched the films or the comics, I’d urge you to go back and read it, it’s a different experience, taking in the novel; you think you know the story, but really, you only know it if you read the original, even the best film or play versions are interpretations and adaptations. 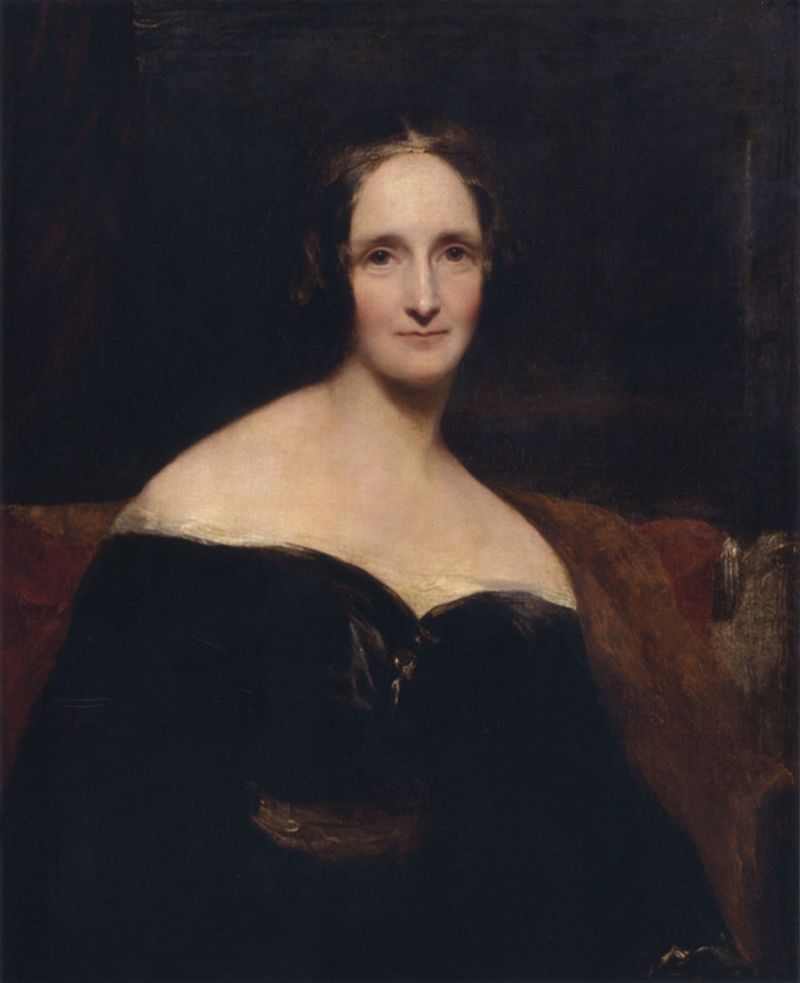 (painting of Mary Shelley by Richard Rothwell, from the National Portrait Gallery)

As with other cornerstone works of the fantastic with which Frankenstein is often grouped, Stoker’s Dracula, Stevenson’s magnificently psychological Strange Case of Doctor Jekyll and Mr Hyde, you have to go back to the actual books to truly know these stories, their nuances, their layers, their themes that haunt us still and likely always will. Mary’s Frankenstein will, most likely, remain one of those select novels which will be read for as long as people pick up books. In a way she has created her own being through her words, drawn down the vital spark of creation, and its lumbering shadow still stalks our dreams and nightmares in the twenty first century, and will continue forever…