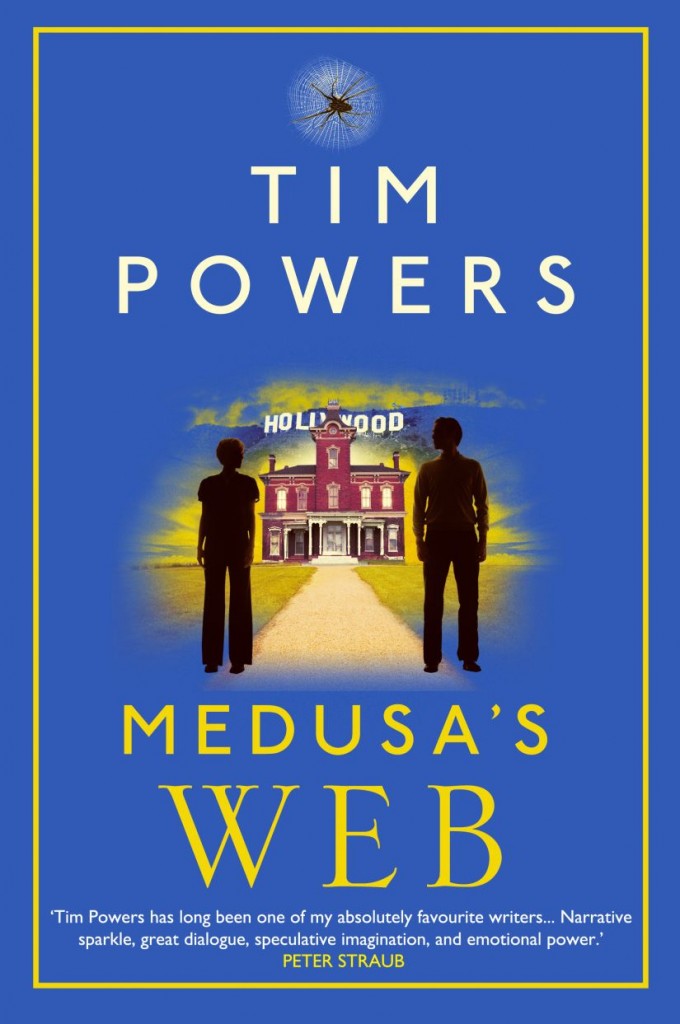 Tim Powers has been one of my favourite authors for many years – I tend to have a tottering tower of books and graphic novels waiting to be read at any one time, but Tim is one of the authors I will shove everything else in the queue out of the way for. Ever since the remarkable Anubis Gates back in the early 1980s I’ve been addicted to his work, which frequently takes real historic events and characters then slips them in and around the fictional characters, not contradicting the established histories of real people he uses, rather taking areas where there are gaps in their lives or parts we simply have no knowledge of, and then using those as an area where he can spin story elements, be it the Romantic poets in Anubis Gates or the spies and counter-spies like Burgess in the Cold War era Declare or the spirits of Edison and Houdini in Expiration Date. It makes for an intoxicating, immersive read, and the historic details leave you wanting to go and seek out some books on those people and periods to learn more (always a sign of a good book, I think, one that inspires you to want to read several more books).

Madeline and Scott Madden are sister and brother, living in Los Angeles, orphans, their mother and father having vanished in mysterious circumstances when they were young, leaving them always wondering what happened and why their parents just left without a word, never tried to contact their children again. Growing up somewhat damaged, they were raised by their Aunt Amity, alongside their cousins,  Ariel (who seems to harbour some grudge against Scott for reasons he doesn’t understand) and reclusive, wheelchair-bound Claimayne in her sprawling old mansion, Caveat (and with a name like that you already know this isn’t going to be a happy family home…). His aunt had been a writer for decades, although in later years her books had gone out of fashion, and the estate and house is rather run down, permeated with that faded glamour of long-gone better days. Once it was almost rural, a large house and estate with small guest cottages that were often rented out to Hollywood starlets back in the earliest days of the movies, but these days LA’s great sprawl means it is surrounded by dense neighbourhoods and the nearby log-jam of the eternally blocked LA Freeway.

After their aunt’s death (by a bizarre supposed suicide method that I will leave you to discover for yourself) they are summoned to Caveat, their first return in many years to the odd home where they grew up, a home with connections to the Hollywood of the 1920s and 30s, even having a corridor lined with doors salvaged from old Hollywood homes of famous people (they’re just doors, of course, fixed to the wall but opening onto nothing, just decorative architectural salvage. Or are they? Somehow you suspect there may be more to them than that…). Apparently their aunt had changed her will just before her death, leaving Caveat to them rather than her son Claimayne or Ariel, who both still live there and are, understandably, not happy about this state of affairs, although none of them, including Scott and Madeline, expect the will to be upheld when challenged as the nature of her suicide would indicate their aunt was clearly mentally unbalanced when she changed the will.

Or was she? Did she have an ulterior motive for changing the will? Is it a slight against her son? Sudden late affection for her troubled wards? Or did she have some plan which involves Scott and Madeline, something they have no knowledge of, a plan designed to work even in the event of her death? And where do the “spiders” fit into this? Strange patterns of lines which went glimpsed send the viewer into a strange state, as if different dimensions are crossing one another, and also connecting different parts of time together during a trance-like state. What did their aunt use them for? Why has she left some for them to discover, why do Claimayne and Ariel use them almost like a drug and who are the people in a shadowy, secret underworld of spider-users and what is their interest in all of this? Scott and Madeline seem increasingly to have been maneuvered into multiple labyrinths, some of which they aren’t even aware of, can’t even see, closing around them, while others are planning and stalking around them with purposes they can’t even guess at yet.

It’s a wonderfully mysterious story, each new, hard-won revelation illuminating fragments of this multiple-level conspiracy, but also offering more questions. Who is out for what and who means ill to Scott and Madeline is frequently hard to tell, Powers refuses to spoon-feed the reader with simple answers, but instead teases us into walking the labyrinth with the character. The spider viewing open up connection to other people and times – Caveat doesn’t just have many historical links to early Hollywood, in some ways it is still connected to it, and those connections are not just one way…

Early Hollywood history leaks into the present (as history so often does), and real historic characters like Rudolph Valentino (arguably the first great star of Hollywood) are tangled with the modern day characters, while closer to the present the family history of Scott and Madeline, their missing parents and aunt are all woven into the narrative, making it a century-long mystery and linked conspiracy, full of rich historical details and how that past shapes the present still as well as a satisfyingly emotional family history tale, arrived at through a wonderfully confusing and intoxicating puzzle across history, time and dimensions. The modern day story arc is compelling, while the historic elements pushing their way into the present are rich and evocative.

This post was originally penned for the Forbidden Planet Blog