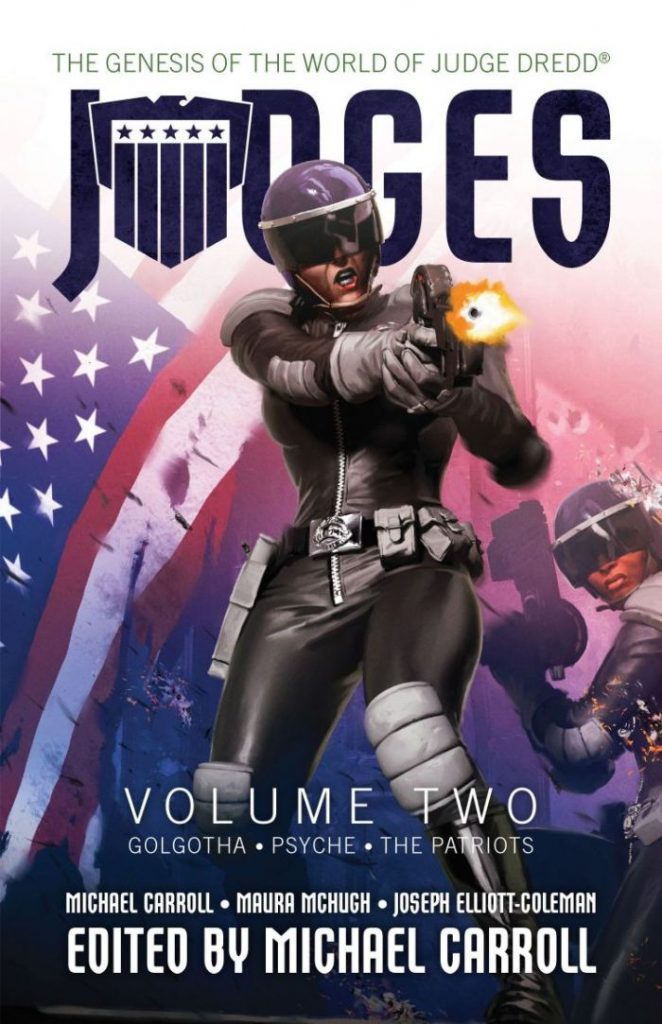 This second volume collects three novellas by 2000 AD regular Mike Carroll, joined by Maura McHugh and Joseph Elliot-Coleman. Mike, I am sure, most readers on DTT will be more than familiar with, Maura – among her many other writings from short stories to collections to scripts for stage, screen and even computer gaming – will be known to DTT readers for some of her very fine Irish comics work such as Jennifer Wilde (illustrated by Stephen Downey), while Joseph’s writing came to the attention of Mike (series editor) via his contribution to Not So Stories, which featured writers of colour from round the globe keeping the wonder of Kipling’s tales but re-imagining them without the period imperialist, colonialist, racist elements.

I must confess, I am not normally that keen on prose tales based on comics. I don’t know why, perhaps my prose and my comics reading sections of my brain like them in their own compartments, but whatever the reason, it isn’t my normal choice, so imagine my delight in finding that these weren’t just interesting tales, but extremely compelling stories, offering glimpses into some of the blank spaces in the history of Judge Dredd, and, like many a Dredd tale, also commenting on current social and political problems.

In fact, as I was reading the three novellas in this collection in preparation for chairing and event with the authors at the Edinburgh-based Cymera festival of science fiction, fantasy and horror literature (like many such events the festival was cancelled, but the amazing team then re-created it online; it has been recorded so hopefully the 2000 AD panel will be on YouTube in the near future), I found that in a disturbing coincidence of timing that some of the elements from all three stories, not least Elliot-Coleman’s “Patriots” tale, were terrifyingly close to the dreadful events we have seen unfolding in the US. So much so that several times as I sat reading them, I had to pause. I’ve been reading Dredd since the beginning, I’ve seen some excellent socio-political commentary woven into the series (not to mention its rich seam of dark satire), but this was something else…

For those not familiar with the series, Judges is inspired by the now-classic thirtieth anniversary Dredd: Origins by the Dreddfather, John Wagner and the much-missed Carlos Ezquerra, which saw flashbacks to the early days of the Judge system. With a number of decades to explore and huge blank spaces to fill in (while keeping true to over forty years of established Dredd history), the Judges series is going decade by decade, with a few tales from each, not exhaustively covering the pre-history year by year, more like spotlights on certain moments, and will continue on taking us closer to the time we know from the original years of Dredd.

Opening the collection is Mike Carroll’s “Golgotha”. This is long before Dredd and the Mega Cities, this is still America, albeit an America that is crumbling and failing socially, economically and politically, it’s only a short few years from our own time, making it very familiar to us, and it is fascinating to see Judges not in Mega City One, but patrolling Main Street in small US towns. Under Fargo the Judge system is expanding, slowly replacing the traditional police force and legal system, but with both having to work in parallel for some time. For those who remember the earliest Dredds this will bring back memories – those stories showed police working under the Judges in the Big Meg, something that slowly faded away from the comics.

Here we see Quon, the very last officer to graduate from an American police academy. Quon has always wanted to be a police officer, and is a straight arrow, very by the books, disgusted at laziness and corruption in the Force, but also filled with loathing for the the incoming Judge system – she believes in due process, civilian policing, a court of peers at trial, not in giving any one person the powers of instant justice and sentencing. Ironically her attitude and unbending adherence to the law make her prime material to train as a Judge, but she isn’t interested, while those same qualities mean her fellow officers, also bitter at the new Judges, despise her too, but she’s going to have to find a way to work with them for an investigation.

In Psyche, McHugh expands on her previous Judge Anderson work for the Dredd Megazine, taking us back to the very first use of Psi-Judges – here called “Psykes”, a covert team of Judges who have been studied and trained with civilian scientists who have long believed there were those with psionic abilities and that if there were, some would be dangerous and therefore the new Judge system would need its own equivalent to protect citizens from harmful Psis. Fargo agrees and sanctions more training and the formation of a black-ops unit, off the books, something nobody will know about if it doesn’t work.

It’s a cleverly-structured two-timeline narrative: in what would be present-day Mega City One (i.e. the same era we see in the weekly comics) Psi-Judge Pam Reed, a pre-cog, literally unearths part of history, exploring old buildings below a collapsed City-block, which happens to contain the original offices of the Psyke research team. Reed’s abilities in this location somehow allow her mind to astrally travel to that era and communicate with Judge Wise, one of the first Psis. As well as being a gripping story (with inferences that if Reed in the future cannot help the nascent Psis in her past, her future may never happen), McHugh also deftly explores the outsider nature of the Psis. Even in Dredd’s time most other Judges aren’t keen on Psi-Division, seeing them as odd, peculiar – Judges are trained to stand apart, but Psis can’t help but feel what citizens feel and this makes them more empathic and human. This outsider status goes doubly here in the early days when most don’t even believe such powers are real, and there is an interesting question mark over freedom of choice: as with the Psi Corps in Babylon 5, there’s little freedom for a Psi, if they are detected they are expected to serve and that’s it.

In “Patriots”, Elliot-Coleman has Judges on the mean streets of New York. This is a New York that has more in common with the dirty, crime-ridden NYC of the 1970s than today, and draws on many influences from that era, from films like The French Connection, Taxi Driver et al, while also rather satisfyingly mixing in elements of The Manchurian Candidate and Carpenter’s classic cops-under-siege Assault on Precinct 13. Right-wing patriots, who see themselves as heirs to the original American Revolution are trying to defy the advance of the Judges system, seeing it as a surrender of liberty and democracy. And they may well be right, but the problem is like many fanatics they are willing to kill many innocents – for their own good, of course – for their cause, and while they call out the banner of liberty and freedom they also won’t accept anyone differing from their opinion.

Judges, even early era Judges like these, are just as stubborn and determined in the application of the Law, of course, so we have two unyielding paradigms clashing violently for the soul of the nation. And in “Patriots”, and indeed in “Psyche” and “Golgotha” too, we see both sides of the pro and anti-Judge argument and resistance, and the thing is, both sides have some moral validity, this is a moral quagmire, not a straight black and white morality, and that makes it far more thought-provoking for the reader (and also more dramatically satisfying too). For all their violent methods and their disregard for the safety of their fellow citizens (the ones they proclaim they are protecting), they do have some grounds, the Judges do mark a huge erosion of traditional liberty and freedom. But the Judges have been created because the existing system has failed – they have been trained to be impartial upholders of law to all, unlike courts and politicians, they will not discriminate on grounds of the colour of someone’s skin, their social class, wealth. The crumbling system badly needs them to try and stabilise it. But at what cost?

Each of these stories has been published as a novella on its own, but I read it in the Judges Volume 2 Omnibus, which collects all three, and I’d recommend tackling them that way if you can. While all three shine a light on a different aspect of pre-Dredd history and are their own beasts, they also, like the various comics series over the years, work very well together, feeling separate but also connected, part of a greater whole. For the long-term Dreddheads this is a compelling must-read, a very welcome exploration of how the Judge system first began in America and how it starts, decade by decade to show how it leads up to the post Atomic War world of the Mega Cities we know in 2000 AD, all layered with some complex morality, multiple mirrors to our own very troubled times and a nicely diverse cast of characters. I look forward to more in the series.