This is an old review of an English translation of a European graphic novel by Igort – we’re still not seeing as many translations of some excellent (and bestselling) graphic novels (or bandes dessinées) of European works as I’d like, which is a great shame as there are some wonderful books, both for adults and younger readers, but they just aren’t being picked up and translated in great numbers. Still, it has improved a little in the last few years and was probably less common when I first reviwed 5 is a Perfect Number for The Alien Online back in 2004:

5 is the Perfect Number,
Written & illustrated by Igort,
Published by Jonathan Cape 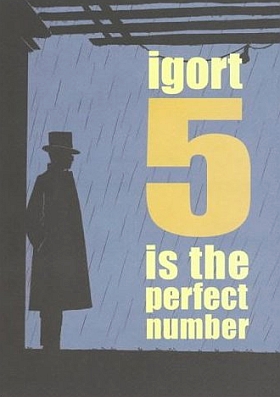 Peppi is a retired Guappo, a Mafia gunman from the old school. The story opens with him making coffee for his son Nino, who has followed in his footsteps and is about to embark upon a hit. Nino is clearly disturbed about something, so his father makes him sit down for a chat and is soon reminiscing about ‘the good old days’. Nino confesses that he has been feeling out of sorts lately and that he isn’t sure the job of a Mafia killer is really for him anymore; Nino has been having disturbing dreams. Peppi produces a box wrapped in a bow and presents it to the depressed Nino, telling him that although his birthday isn’t for a few days tonight feels like the right time. Opening it up Nino’s mood changes instantly to joy as he beholds the top-of-the-line new handgun his father has bought him and decides to take it with him on his job. As the rain starts to come down Nino leaves his father’s home; it is the last time Peppi will see him alive.

It transpires that Nino has been set up for reasons which never really become clear. Obviously whoever ordered the hit is nervous about Peppi’s reaction – he may be old but he has a formidable reputation – and two corpulent gunmen are dispatched to ensure the old man meets his son in the afterlife swiftly. Relaxing with his fishing rod Peppi is oblivious to his son’s fate and his own approaching danger; just another old, retired man fishing happily. Until he is blinded by a vision of the Madonna and realises what this portent means – his son is probably dead and he is next. His old instincts kick in and he soon finds the two fat gunmen looking for him and dispatches them with great violence. Calling on some very old friends for help Peppi find that his son has indeed been killed on orders from the top of the Family. Girding his old loins, Peppi vows to wage war…

The story here is one of classical simplicity – wrongful family death and a mission of retribution. However the way in which Igort takes us through this tale is the beauty of the piece. Dreams and portents play a significant role in the book; Peppi’s vision of the Madonna saving his life, his own disturbed dreams of being chased, Nino’s troubled soul coming out in his dreams. They serve to give us insight into the mind of the protagonists, but do so in a wonderfully stylised manner. Instead of giving us direct access to their thoughts and fears we share the metaphorical imagery of their dreams and visions and, like them, must interpret them for ourselves (which I found to be both a clever and engaging move – it draws you into the character far more than if the author simply spoon-fed the reader the character’s thoughts directly).

Flashbacks are also a major component of the story, from Peppi’s cherished tale of how he met his late wife to his days of glory as a great Guappo. Indeed the whole story is infused with a loving (but never cloying) nostalgia for the 40s and 50s (classic Noir period). The artwork moves from a much stylised but not too unrealistic form to increasingly odd-looking art for the dream sequences. The detail helps to fill out the period feeling, with movie posters and, in one scene, a fabulously stark silhouette of a 50s garage which sets the scene and period perfectly. Films, especially the old crime and Noirs, are obviously a huge influence in this tale and the style of it’s telling, giving it a very expressive imagery.

As with the finest Noirs or the old Giallos there are rarely any truly innocent or good characters as we would understand them. Peppi is the central character and we are encouraged to sympathise with his quest for vengeance, but Peppi is also a stone-cold killer who has taken many lives. Of course, he sees himself – and his son – differently, as men of honour; their moral outlook in life is, like that of most heroes (or anti-heroes) in a Noir is flexible and somewhat different to the norm for society. Peppi, disparaging the modern hitmen, exclaims at one point that you can tell a man by the way he kills and adds proudly, “My son, thank God, kills the right way.” His reminiscences of the good old days are also laced with violence he finds acceptable – he talks happily about how “people killed one another by the rules” as if this makes everything alright (in his moral outlook it does). It is to Igort’s credit that he does not whitewash his characters into simple good and bad but presents them to us in this manner and yet still he manages to win the reader’s sympathy for Peppi.

This is an unusual graphic novel by English-language standards (although not for European BD), laced with nostalgia for the old films of the 40s and 50s and featuring some lovely and incredibly expressive artwork. It is not afraid to show us the violent past (and present) of our characters; it makes no judgment on them and leaves it very much to the reader. Igort even manages to slide a little humour into such a bleak tale, notably when Nino tells his father he is running late for a job and Peppi tells him that’s fine – it gives the soon-to-be deceased a few more minutes of life and so shows the hitman has style and class. I thoroughly enjoyed reading this and found it is one of those books that demand a re-reading to look for little pieces of dialogue and artwork that you may have missed first time around. This will appeal to anyone who enjoys a Raymond Chandler novel or even Altered Carbon (or indeed any Noirs).