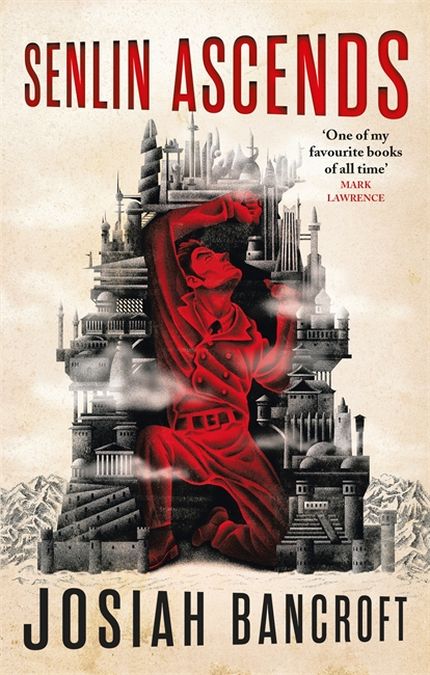 Sometimes I’m waiting eagerly for a new book by an author I admire, always a happy moment. And then some other times a book from an author you haven’t encountered before arrives on your desk, and you have an even happier moment of a new literary journey, a walk onto a new area of the fantasy map you’ve not explored before. And for me that was the case here when an advance copy of Senlin Ascends appeared in the Blogcave; the first in the “Books of Babel”. That caught my attention, the name of that great structure – real? Mythical? More likely a fusion of later myth overlaid over some actual historical root like one of the great ziggurats of the ancient world. Babel. The tower to the heavens, a combination of humanity’s ambition, ingenuity and unbridled hubris, it’s a symbol that has cast a long shadow over human storytelling for centuries, there is something irresistible about it, and when a writer has a new angle on this ancient symbol it’s always going to be intriguing. My bookselling Spidey-sense was tingling, and it rarely points me wrong.

Meet Thomas Senlin, headmaster of a small coastal town, until recently a bachelor and a rather upright chap, something of a fuddy duddy, perhaps, and a man who is, as you’d expect for a teacher, well-educated. At least in terms of what he has read, but he is about to learn that the wider world doesn’t always conform to what you may have read, no matter how eminent the source book supposedly is. And Senlin has surprised his local village by finally taking not just a wife, but Marya, not only a very beautiful lady, but one with an impish and playful, adventurous  streak, almost the polar opposite of the fairly austere Senlin. And yet Marya has seen something in Senlin the other villagers never suspected, and she has awoken something in him. And for their honeymoon Marya and Senlin have taken the train to the Tower of Babel, the famous site he has told his students all about in school, but never visited.

The base  of the vast Tower is surrounded by the huge and teeming market, which right away pitches our newly weds into an exotic casserole of merchants from all over the world and goods from every corner, bustling, vibrant, overwhelming to a couple from a small, distant town, especially to Senlin, while Marya, resplendent in her new bright-red Pith helmet (so he can always spot her in a busy crowd, she tells him with a smile) seems to revel in it all.  A wonderful wife, a honeymoon in an astonishing location he’s dreamed of, what could go wrong? Well, of course things do go wrong, I mean there wouldn’t be much drama if they just had a nice holiday and went home with some postcards. There are little warning signs – Senlin, from his history and guide books, expects a land of wonders, cultured, the pinnacle of civilisation, and instead their first impressions are more like a wild and disreputable souk, the sort of place where you tread carefully and watch your belongings. Or your wife…

Because just like that, a few pages in, barely arrived at their destination – in fact not even in the Tower itself yet – Marya vanishes. And this teeming place seems to have no real authority, no police to turn to (there are some security types, but most are thugs posing in uniform to take advantage of the unwary). When he realises he has lost her he searches, but the market surrounds the base of the Tower, so it is massive, and he has no chance. Eventually Senlin concludes all he can do is proceed up the Tower to the Baths, two levels up, where they intended to stay at one of the hotels – Marya is a capable and independent woman, chances are after realising she may never locate him in the busy market she’s decided to go there already and wait for him.

This is, of course, assuming she is merely lost. But soon Senlin starts to hear stories from others that they too have lost loved ones, and in fact the base of the Tower – the Skirts – is festooned with notes from those desperately seeking missing family members, a scene with disturbing similarities to those posters placed around the 9-11 site as people urgently tried to find what happened to their loved ones. Senlin, a man who lives a very conventional, straightforward life is totally unprepared for  the world he is about to enter when he first moves into the Tower, and into the Basement. Each level of the Tower is a world unto itself, each different, but related, each stage is a “ringdom”, and like any good quest, any hero’s journey, Senlin will need to traverse each of them and meet their individual challenges. 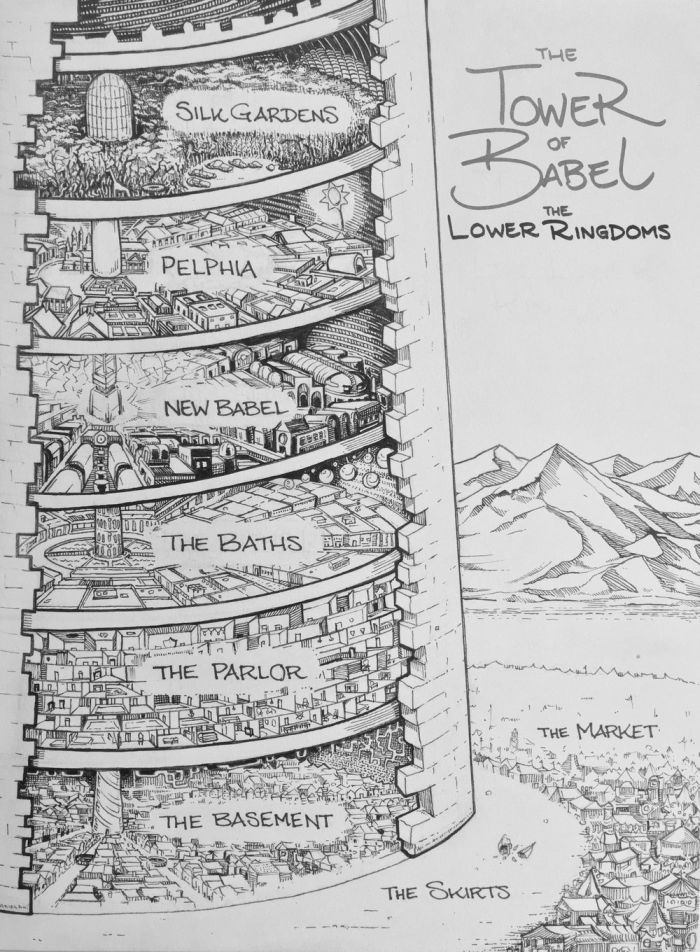 (a glimpse into the lower levels of the Tower of Babel, borrowed from the Books of Babel site)

Except Senlin is as far from anyone’s idea of a capable hero as you can imagine. Trusting in his guidebook soon proves to be a mistake – this is no reliable Baedeker, beloved of Victorian adventurers in exotic lands, it seems like an act of total fiction. Senlin is going to have to learn how to adapt if he is to survive. He’s the proverbial fish out of water, in fact he is often so damned wet you almost feel the urge to slap him and tell him to get with the programme, he’s the blundering idiot abroad, totally unprepared, no idea what he is getting into, no idea what the local customs are, how things work here and it doesn’t look like he has what it takes. The unlikely hero is not a new idea in fantasy, but here Bancroft handles that trope extremely skilfully. Senlin meets people, has encounters, and they slowly start to change him through the hardest of lessons. But he doesn’t transform into some great hero, he’s still Tom Senlin, the village school teacher. But he’s learning. And even from the raw beginning, even at his weakest, Senlin does show one spark of backbone – he will not walk away without his new wife, no matter what.

And I’m not going any further into this narrative because I don’t want to risk spoilers – this is a journey, literally and metaphorically, and the reader needs to undertake those discoveries and challenges as much as Senlin does. The idea of the “ringdoms” is a great one, allowing for totally different worlds within worlds, and many different scenarios to test Senlin. And it also allows Bancroft much scope for some fabulous world-building and some lovely descriptions. It’s a world that feels like a mix of different parts of our own history – nice little details like people visiting from Ur, for example – and myth, and yet it is also so clearly not our world, and again this allows much scope for metaphor.

And then there is the style of writing – Bancroft has a remarkable way with words; workers in their faded finery for a night out have “collars the colour of cigar smoke”, while dancers have “mouths lurid as mashed cherries.” It put me in mind of those wonderfully evocative descriptive phrases in the Philip Marlowe novels, making Bancroft the fantasy equivalent of Raymond Chandler; I was not surprised to find out after finishing the book that he is also a poet.

An engrossing, intoxicating delight – I can’t wait to climb higher…

Senlin Ascends will be published by Orbit Books on January 18th, 2018; check out The Books of Babel site for more glimpses into this fascinating world, and you can read an excerpt from the book here on the Orbit blog.