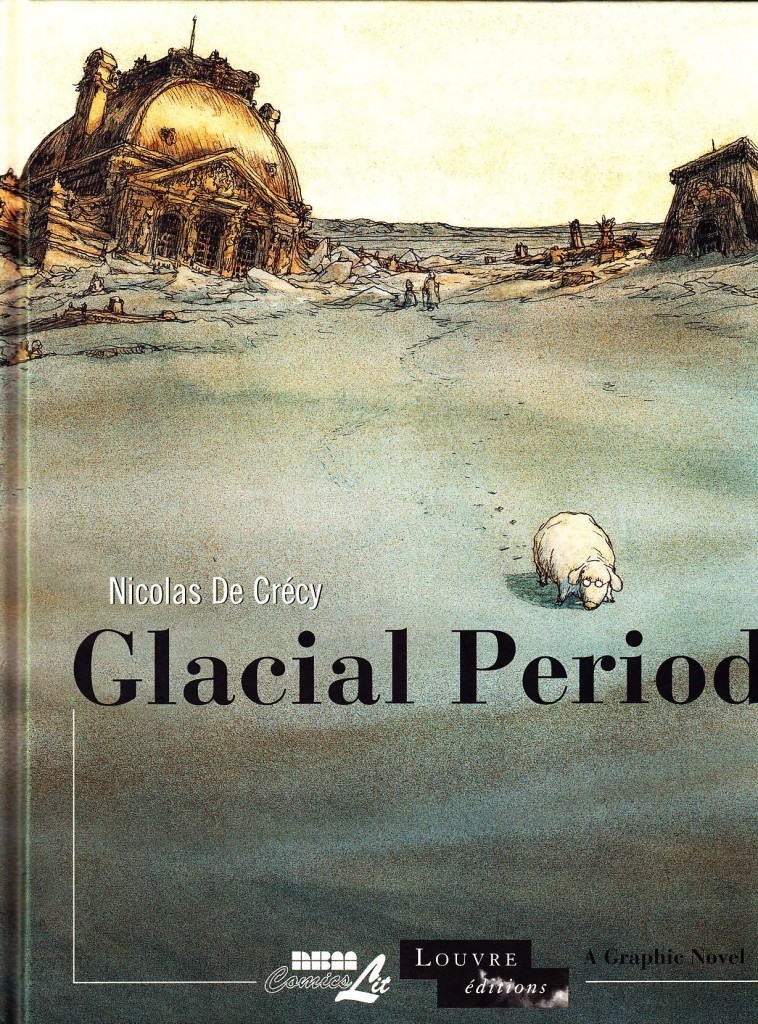 Nicolas De Crécy is one of the more fascinating – not to mention gifted – creators to emerge from the great Franco-Belgian comics scene in the last couple of decades, able to switch his styles seemingly effortlessly to suit different subjects, from biting satire in the trilogy which started with Léon la Came (in collaboration with the equally brilliant Sylvian Chomet, who would go on to become the acclaimed animation director of Belleville Rendezvous and The Illusionist) to end-of-the-world science fiction as we have here in Glacial Period, part of a series created in conjunction with the Louvre Museum in Paris.  First published in Europe back in 2005 it has recently been reprinted in English by NBM, and a very welcome return to print it is, with this single album (presented here in a slim hardback similar to many French bande-dessinee volumes) allowing De Crécy to express adventure, comedy and action all in one tale, accompanied by some beautiful and varied artwork.

The world is frozen, the snow and ice hold dominion over the sleeping land below, as they did several thousand years ago during the last Ice Age (which still leaves its marks on our landscape today). A party crosses the often featureless expanse of white – they are researchers from an enclave of surviving humans somewhere far to the south, exploring, seeking out a fabled lost metropolis, the humans accompanied by some rotund creatures who look like tubby dogs but can speak. In fact these are genetically modified dogs (with a little pig thrown in, hence the rotund appearance) and their sense of smell is  an invaluable tool for the expedition. One, Hulk (they are all named for what the researchers think are the names of ancient gods), has very refined nasal receptors (as he likes to tell everyone) which he can even use, via a Carbon-14 augmentation, to detect some of the history of found objects. 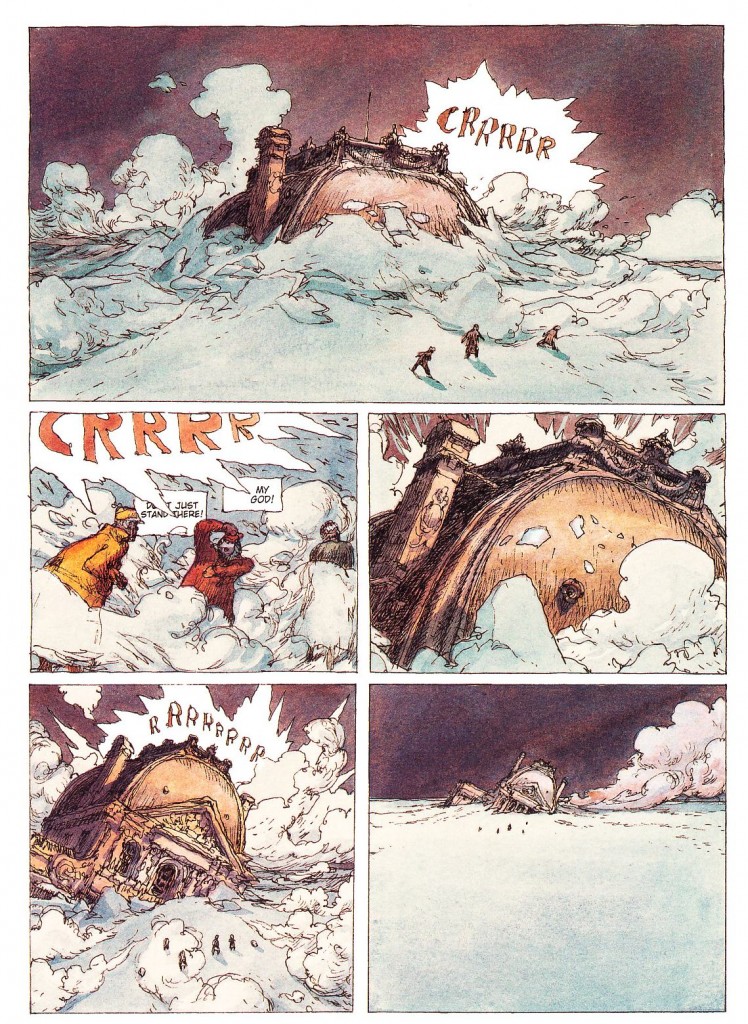 The thing is, this earnest party of researchers on their noble quest knows almost nothing about the world before the great freeze. We see them discussing a venerated object to be taken back for serious scientific study, a mysterious logo of interlocking letters – hieroglyphs they want to learn the meaning of, little knowing it is merely the logo of a long-gone French football team… When a collapsing fissure reveals the mighty Louvre museum, emerging from beneath the snow, they enter and are astonished at the size of the place and the sheer volume of paintings. Except they don’t know what paintings are, much less why anyone would create them and hang them on walls. Or how a flat image can still convey a sense of depth. Shorn of all knowledge of pre-ice civilisation they attempt to understand our world through these pieces of art, swiftly coming to the conclusion we must have been illiterate but skilled at image making, hence all the paintings, and also, judging by the number of nudes, a rather salacious bunch of erotomaniacs, not to mention having some odd notions about femininity… 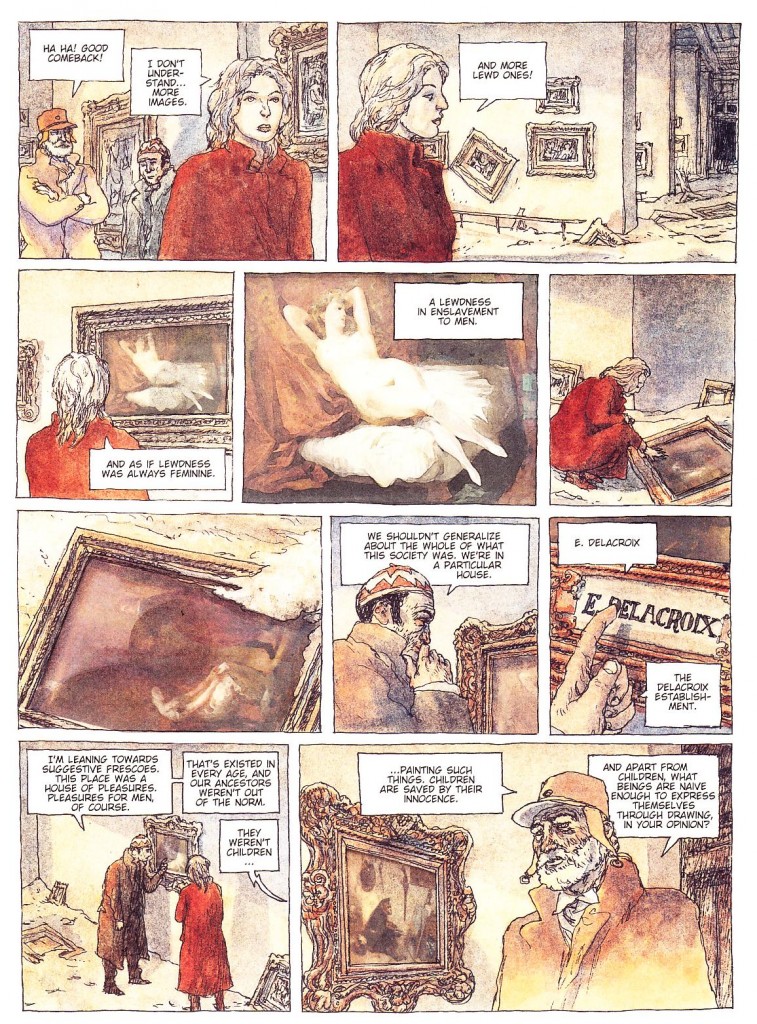 “I don’t understand … More images. And More lewd ones! And as if lewdness was always feminine. A lewdness in enslavement to men,” muses Juliette, the only woman on the team, observing large numbers of nude paintings and wondering about gender in that long-ago society.

In many ways this is broad comedy, as we watch the serious historian attempting to place some paintings into what he thinks is a chronological order so they can give them a rough history, of course getting it hopelessly wrong. Even the concept of an art gallery and museum is unknown to these researchers, able to find these remains of the previous human civilisation, but totally unequipped to comprehend the social, cultural and historical meanings contained within those works. Of course there is a serious point here, partly riffing on the old “I am Ozymandias, King of Kings, look upon my works ye mighty and despair” theme of how even the greatest grandeur will be lost in the face of the eternal march of time, but partly a comment, as much good SF is, on our own present era. We have spent centuries, especially since the 1700s, piecing together this history and customs and beliefs of those civilisations which predate us – ancient Greeks, Egypt, Babylon, Ur, Angkor Wat – from similar pieces of art, paintings on walls, sculpture, lost languages. And with great respect to generations of historians and archaeologists who spend careers painstakingly putting those clues together, there must be whole swathes where a person from that era would find our conclusions laughable. I found this especially intriguing, having just recently read Connie Willis’ Doomsday Book where a historian goes back in time to the 1300s and finds out how many solid conclusions they had reached on life back then were false. It’s a reminder to all seekers of knowledge to remember humility and the fact that, lacking important context, we may easily and often get it wrong.

Hulk, separated from the group, is the first to enter and finds himself by great walls within walls which any visitor to the great museum will recognise as the original walls when the Louvre was a fortress-palace, now buried inside the great gallery. A visual reminder of the passings of civilisations, as is a later, more comic sequence where some of the artefacts, now possessed of a sort of life (a la Night at the Museum) tell Hurk of the days when earnest, slim scholars came to gaze upon then, then much later (in our own time) the obese, jolly tourists gawking. Again satire from De Crécy, painfully on the nose, and once more riffing on how time changes everything. His art changes from delicately drawn scenes with the main characters to an almost cartoonish style for Hulk and the other modified, intelligent dogs, to a gloriously detailed, painted approach to depict those millennia of artworks gathered in the Louvre. 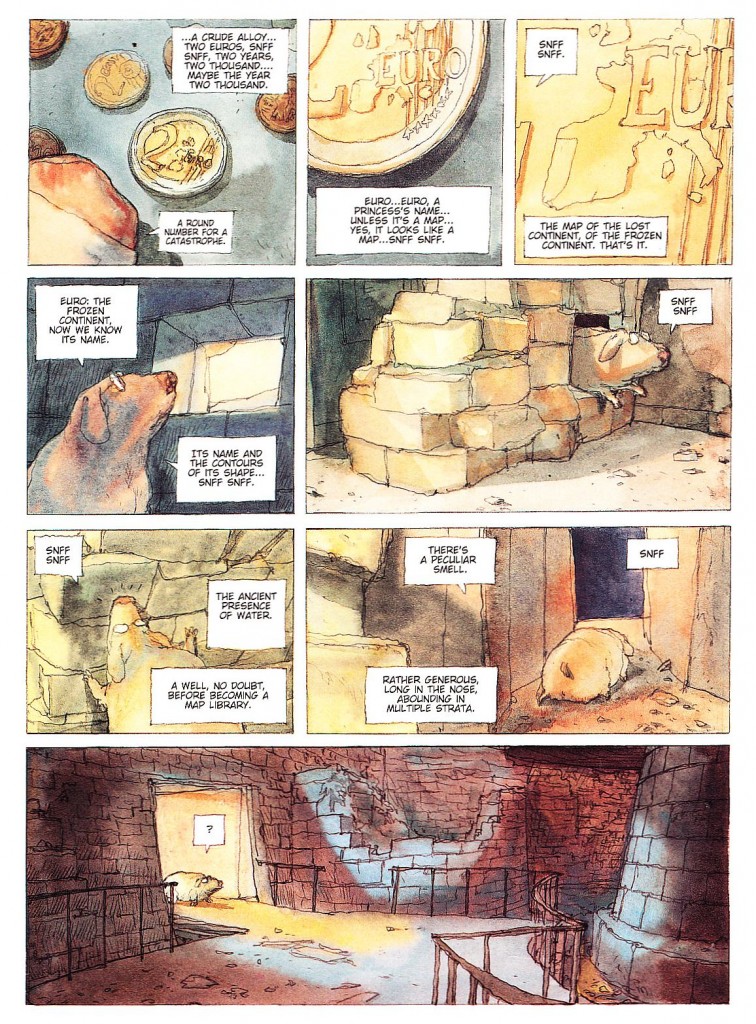 At one point De Crécy touches on the war years and the evacuation of these treasures to the countryside to protect them from Nazi bombers, as if, one character comments, they were more important than people. Again De Crécy uses a double-edged sword, on the one hand berating the way we have been conditioned to place certain artworks on a pedestal for veneration, a value which is purely in our head, product of our culture (a culture, which the book reminds us, can vanish taking all the contextual meaning of that object with it), when it is people who are more important.

And yet at the same time those works of art are people, our collective soul of aesthetics, beauty and wonder without which any human society is dreadfully impoverished. We’ve made art for as long as we’ve been human, from paintings etched on cave walls by flickering firelight to these massive oil paintings dominating entire walls of the Louvre. Perhaps De Crécy is trying to remind us with his satirical approach not that these works lack importance, but it is we who give them that importance, so we shouldn’t simply accept being told by some authority this is a masterpiece to be worshipped, we choose, we think, consider, and in doing so we make the art part of us, as it should be. It’s a delightful satire on human civilisation, knowledge and art, both lacerating and venerating it, using the genre of science fiction and a future-set tale to comment on the present (and the way the present sees the past, which of course is what today’s present becomes in time too), and even veers into some highly enjoyable fantasy when Hulk comes in contact with some of those artistic treasures, who have their own opinions. Beautiful comics work and art talking about the importance and place of art, what’s not to love here? 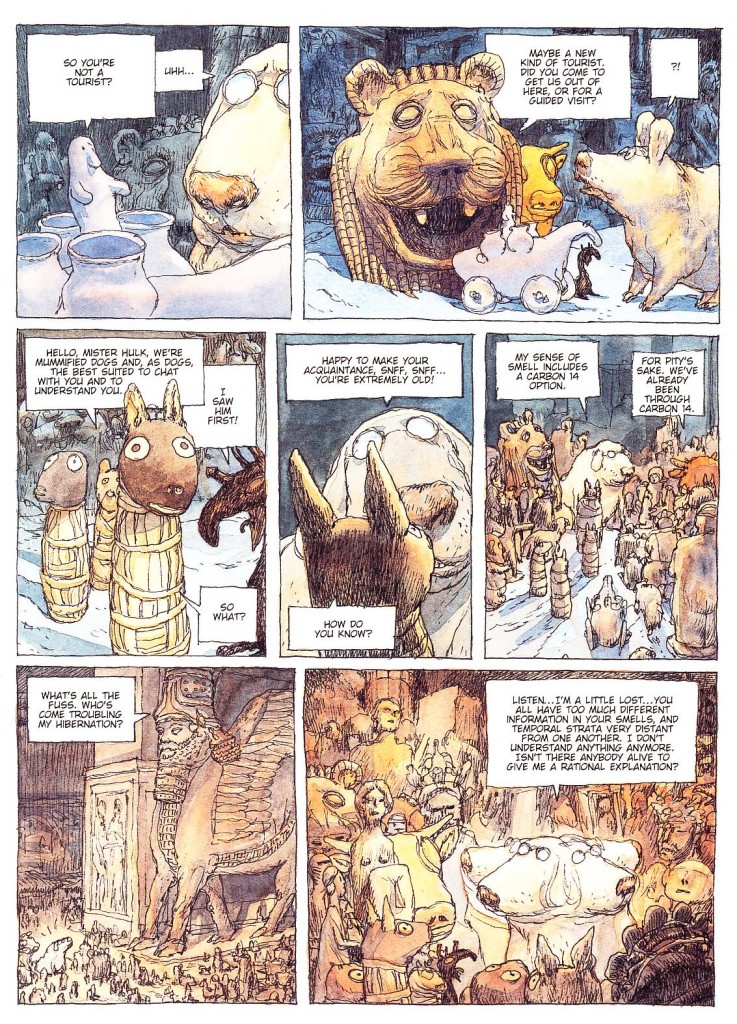