This report was originally penned for the Forbidden Planet Blog: 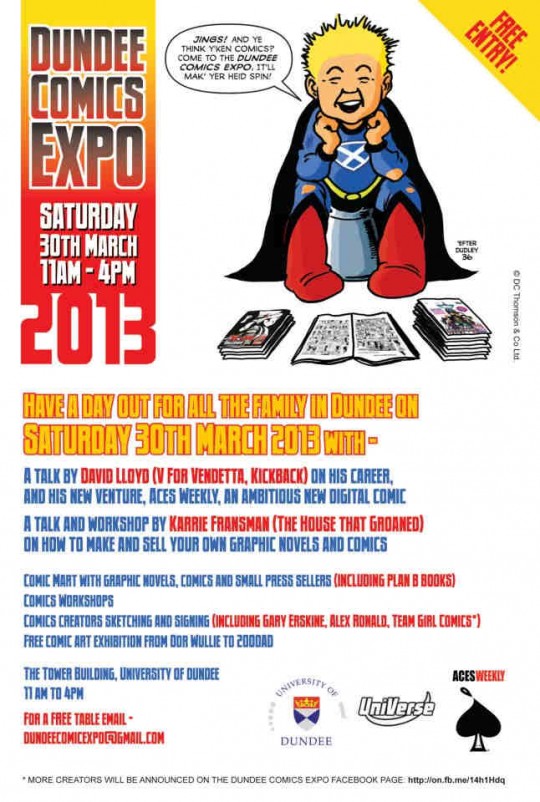 Last Saturday the free Dundee Comic Expo, organised by Phil Vaughan and Chris Murray (well-kent faces on the Scottish comics scene), took place in Dundee University, helping to fill the springtime comics hole left by having no Hi-Ex this March, and I headed up from Edinburgh, crossing two of Scotland’s great rivers that help carve our coastline into its distinctive shape. As with the trip to Hi-Ex the actual travelling to the convention affords some beautiful views out the train window as the Scottish landscape slips by. (above: shot from the train going over the Tay Bridge on a cold but bright spring day to Dundee; below: Phil Vaughan and Chris Murray, organisers of the event. I had to shoot in black and white as the camera’s colour sensor was overloaded by Chris’ shirt. All photos from my Flickr, click for the larger versions) I arrived a little before the doors officially opened, which gave me some time to chat briefly to Phil and Chris (after paying our respects to PC Murdoch of course) as they were seeing to last moment arrangements, and to some of the comickers behind the tables in the Baxter Suite and the larger (and very airy due to lots of natural light) College Hall, where most of the small press folk and the dealers were finishing setting up. Right away as I entered College Hall I spotted Gary Erskine, having a quick natter with Monty Nero. These days wherever Gary goes at a comic con there is likely to be some representation from the Roller Derby crew nearby – the girls on skates have become a bit of a fixture at some of the Caledonian comics events these days, brightening things up, plus it’s good to know they are there to keep an eye on Gary. (above: Gary Erskine chatting to Monty Nero; below: setting up before the doors officially opened to fans) On spotting a table full of diverse works from one of our fine UK small press teams who have effectively grown into a publishing stable, Accent UK, I thought the chap behind the table might be Colin Mathieson, and so it was. As is the nature of my work I talk to a lot of folks on the comics and books scene but since we’re all in different parts of the country I don’t get to see them, and despite the fact I’ve swapped emails for years with Colin and his Accent compadre Dave West I’ve never actually met him so it was a pleasure to actually see him in the flesh and get a chance to talk to him for a while (readers in North America can see the Accent UK gang at the upcoming MOCCA gig in New York). I’d remembered to bring my little leather journal which I’ve been using as a sketchbook and Colin, after telling me he was planning to return to more drawing and less concentration on just writing, was kind enough to do a great sketch for me in my wee book to add to the collection. I had a funny feeling looking at the array of their titles spread out on the table, it was like looking at a slice of Richard’s reviews on the blog as he has covered quite a few from Accent over the years. Since they were sitting there so temptingly in front of me I decided to buy a few while I was there. Continuing round the hall I stopped to talk to writer Jim Alexander, who I hadn’t seen since Hi-Ex the previous March. And since he was well placed with his table at a good corner of the hall I also nipped behind his table to take a shot of the event from the perspective of the writers and artists, so here’s the view of the Dundee Comic Expo via Jim-cam: Being Dundee, home of the mighty DC Thomson, it’s will surprise no-one that there was a presence from some of their titles and characters, be it PC Murdoch from the long-running Oor Wullie strip greeting visitors outside the Baxter suite, numerous DCT pieces among the artwork displayed around the expo and naturally long-running titles like the Beano and Commando were available from the DCT tables. And indeed if you arrive by rail there’s a collection of Dandy and Beano characters such as Dennis the Menace (with Gnasher, naturally), Desperate Dan and several of Leo Baxendale’s creations like Minnie the Minx and some of the Bash Street Kids (annoyingly I only saw it on the way home, when it was evening, so excuse the poor light quality – still a great sign to welcome visitors though!): Moogs Kewell had her comic work – a neat wee landscape format travel work about Japan (which I had to buy for myself to read later) in a manga-influenced style, and some fabulous hand-made jewellery – I had to take a close up photo for one of my manga and anime-mad colleagues, who was especially delighted at Moogs’ supercute Domo earrings (I thought she would be) – you can check them out and order her geektastic jewellery for yourself over on her Etsy store. After checking in with Pete and John from Glasgow’s Indy-friendly Plan B store who had a nice array of good titles to choose from I saw David Lloyd; I’ve swapped emails over the years with David, but never had the chance to meet him so it was a delight to meet in person the man who created the art for one of my favourite books of all time. David was sketching a certain Fawkesian-masked character for a fan and we had a short chat, then to my surprise I found an entire hour had gone past already and I had to scoot off to the lecture hall to listen to David giving his talk, which mostly concentrated on discussing Aces Weekly, the interesting new digital-only take on the traditional British anthology style weekly comic, which boasts a hugely impressive talent roster. David discussed the digital model, how there was no up-front payment but everyone took equal shares from anything made (he himself put his own dosh into starting it up) and, as he said, there’s no middle man like a distributor to take a cut, so anything made goes to the people who actually made the strips. With a talent pool that is obviously busy with other professional engagements it isn’t the money that’s the draw though, it’s the huge amount of creative freedom they have. David seemed quite happy with Aces as it passes its second volume mark and plans to keep it going, but as with other digital-only comics he added that there’s always a need to drive for more subscribers (and if you are thinking that sounds interesting then check David’s guest Commentary on Aces we ran here a few months ago), so do have a look. The vagaries of rumbling tummies and lunch meant I unfortunately missed a chunk of Laura Sneddon‘s talk on the hidden history of women in comics, but did manage to get to the second half and what I heard was interesting, some of it I had heard of before but a good bit that I hadn’t come across (always good to find out new things), and it reminded me of a similarly themed and equally fascinating talk I attended at Edinburgh’s Central Library from the Glasgow Women’s Group last year. Hannah Berry‘s talk followed and she was, as ever, delightfully animated and passionate about the medium. The only drawback for me was that in the relatively low light of the lecture hall it’s hard to get a decent picture without using the flash (which is a bit intrusive), and Hannah is so animated I had a virtual roll of picture of her obscured by the blur or rapidly gesticulating arms. I haven’t seen Hannah since she was at the Edinburgh Book Festival a few years ago so it was good to see her again and hear her talking about her latest work, the excellent and creepy Adamtine (you can read a guest Commentary by Hannah on that book here on the blog). (above: Laura Sneddon’s talk on the hidden history of women; below Hannah Berry’s talk) Bryan and Mary Talbot also gave a talk, still aglow with their win from the prestigious Costa book award (the first time a graphic novel has won that major UK literary gong, competing directly against the prose works, a great achievement for them and a nice acknowledgement of the medium and its potential). Bryan decided that Mary should do most of the talking. Most of the talk concentrated on their award-winning Dotter of Her Father’s Eyes (one of my own picks for Best of the Year), and it was, appropriately for a book which has so much autobiography in it, well illustrated not only with projections of finished and work-in-progress artwork from the book but with plenty of photographs, some general reference works for the art and design, but many from family photo albums used to help in creating the work. Mary and Bryan also talked a little more at the end about Mary’s next work, which she had mentioned last summer at their Edinburgh Book Festival appearance, which will use a fictional character to explore the era of the Suffragettes. And yes, we have another guest Commentary post to point you to if you missed it last year, where Mary and Bryan talked us through making Dotter (obviously we’ll hope to bring you more on the new work further down the line too). Sadly I had to miss Nigel Dobbyn‘s talk so I could get a last turn around the two rooms where the creators and dealers had their tables, and managed to get brief chats with some more folks and see how it had gone for them – the general consensus was that it was a nice event, small but very accessible and nicely scaled for folk to chat to each other, and they seemed pleased with how they had done on the tables too. For my part I had a great time talking to folks (annoyingly I only found out later on Twitter I had missed a couple of folks I know online who were there and who didn’t know I was, c’est la vie), getting to meet others for the first time, picking up some small press comics for my collection, and the nature of the event lent it a very accessible and friendly, open feeling with readers, dealers and the writers and artists, both professional and self published, all mixing freely, a very nice vibe to the day.