Several years ago Jonathan Clode and John Stuart Clark (who has long cartooned under his pen-name of Brick, his graphic memoir Depresso made my best of the year list in 2011) were trying to put together an interesting project, an anthology of stories to mark the centenary of the start of the First World War, To End All Wars, to be published by the fine Indy UK publisher Soaring Penguin Press. Along with others in the comics community I put out a signal boost (on the sadly now defunct Forbidden Planet Blog) for the call for contributors, with a desire to avoid jingoism and nationalism, to include writers and artists from different countries who would tell tales (often inspired by real people and events) taking in the different sides in that dreadful conflict, the many arenas, from the hell of the Western Front to the frozen slaughter in the Alps, beneath the waves, in the air. 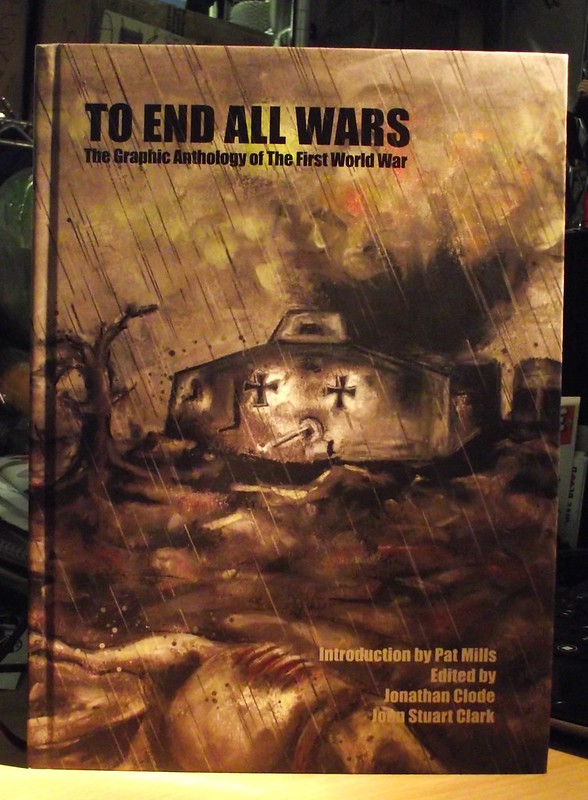 (cover for To End All Wars by Elizabeth Waterhouse)

As 2014 approached there were many plans to mark the centenary, more than a few in very respectful and emotional ways. But, as ever, there were those who (usually for political, ideological reasons) who tried to argue this was not an occasion for reflection but tried to claim the more “glorious” side of war (yes, Michael Gove, we’re looking at you and your ilk). Above all else none of us involved wanted that, if anything we stood by Wilfred Owen’s line about “the old lie; Dulce et Decorum est Pro Patria Mori”, how sweet it is to die for one’s country. We had no time for those who would hide horror in some imagined glory, we wanted to tell stories about actual people caught up in this vast conflagration, the people behind those awful lists of statistics of dead and wounded and missing.

In the end more than fifty writers and artists would take part, from thirteen different countries, including Brick and Jonathan who also created stories as well as herding the cats by bringing together and editing all the stories from those different creators in different countries. No-one felt comfortable with earning anything from this, we decided that monies instead would go to Medecins Sans Frontieres, the medical charity that has and continues to help  victims of wars. I’m told that overall we raised some £3, 500 pounds for that cause. The anthology got some nice coverage on the BBC site, and at the annual Eisner Awards, the major comics gongs, given out at the huge San Diego Comic Con, we found ourselves with two nominations. We didn’t win, but for an anthology like this from a small Brit publisher to get to that level of recognition from fellow comickers was wonderful (I am still happy to tell people I was in a double Eisner nominated book!). 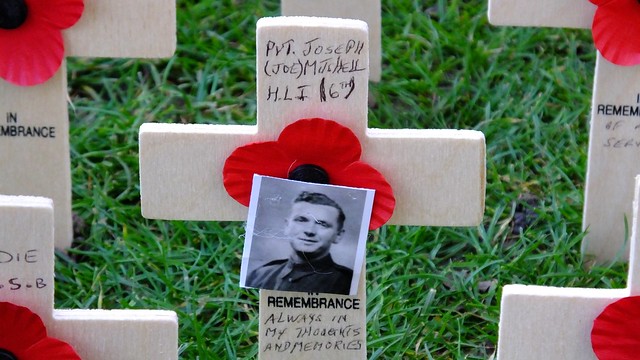 There were some people I knew taking part, such as Brick himself, Selina Lock, my old pals Andy Luke and Sean Michael Wilson. So many I hadn’t heard of before, some of whom would create stories here that have remained in my head ever since, such as Stuart Richards’ Il Gatto (a wordless tale following a real-life event of a cat who went between the lines in the war in the Alpine peaks), Ian Douglas and Stjepan Mihaljevic’s Dead in the Water had haunting imagery from the U-Boat war, both the sailors above and those in their steel coffins below.

Near my home in Edinburgh there is an old cemetery, the centre deliberately allowed to overgrow to offer a mini wildlife refuge in an urban area. As with many such places it contains Commonwealth War Graves. One in particular has always captured my attention as, unusually, it is a double memorial a father, Private James Allan, and his son, Pipe Major James Allan, both from the famous Royal Scots, the father killed at the end of The War to End All Wars, his son killed in the war that came after that one, during the fall of France. Eerily both were the same age when they lost their lives. I often wondered if the father had comforted himself during his battle that at least his young son would grow up safe, because who would ever be foolish enough to start another war after this one? 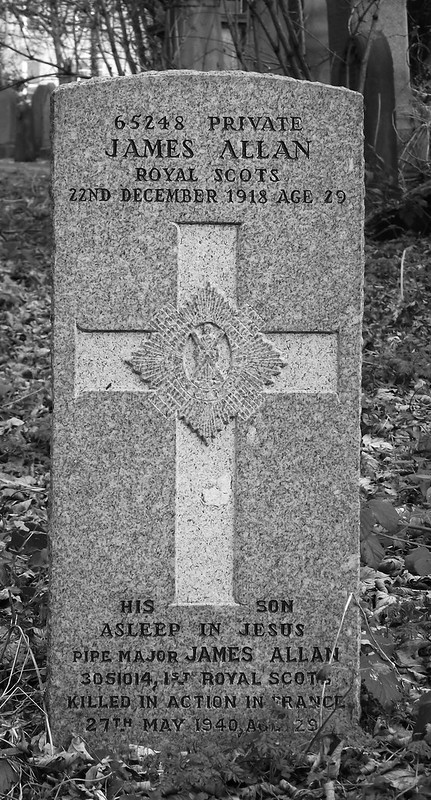 I had shown a photo of their gravestone to Brick, who commented that there was a story in there, and perhaps I should consider trying to pen one myself. I thought about it, and the first ideas seemed too cliched. I let it sit in the back of my head until an idea just came to me – two names on there, father, son. But there was a third casualty, whose name didn’t appear there, the wife, the mother. And as I thought of that I realised by extension that all of the many war memorials, from the smallest wooden tablet in an old church hall to large stone obelisks in city centres, also lacked the name of those other casualties, the mothers, the wives, the sisters. Women who had loved those men only to see them ripped away violently from them, left with a wretched wound that went down to their very souls, the walking wounded whose names were never etched on any monument.

I had my way into the story; I wasn’t satisfied unless I could find an emotional key to it, I felt it had to have that emotional weight, partly for the reader, but also partly from respect for what those mothers had gone through. I think I channeled a lot of my own grief from the sudden loss of my own mother into the writing. I write every week, but since we lost mum I hadn’t penned a story, reviews, interviews, articles, yes, but the spark for narrative was dampened, but I had a strong urge to do this one, and wrote it in a few hours without stopping, stream of consciousness style, then did a little pruning and editing. I thought perhaps I put too much into it, took some out, but Brick and Jonathan told me not to hold back, put it all in.

Kate Charlesworth, veteran comicker, fresh from creating the art with Mary and Bryan Talbot for the superb Sally Heathcote, Suffragette, kindly agreed to do the art. The rest of the collection is in comics format, but our story, which would close the book, was prose by me with illustration by Kate. My few visual ideas weren’t terribly insightful, but as Grant Morrison once said, writers should trust their artists on the art – they know more about it than scribes. And Kate came up with some beautiful ideas I’d not have thought of, such as the little mementoes like baby boots or locks of hair that mothers keep, or the bookending of the pages with a group of women from all walks of society (because this conflict crossed all lines) seeing their men off to war with a similar image of mothers from different cultures and countries clutching pictures of their lost loved ones from all the too many damned wars we’ve had since then. It was beautiful, emotional, worked so well with the words, and I admired that Kate carefully avoided using any military or combat imagery.

Four years on and the book is almost out of print – you can’t find it on online bookstores like Amazon (except second hand), but Soaring Penguin still has a very few left, so you can buy it from there (and two pounds from each book sale still goes to MSF). We started this journey to coincide with the 1914-2014 centenary. As this November sees the centenary of the Armistice in 1918 I wanted to do something, and after seeing the Garden of Remembrance opening in Princes Street Gardens a few days ago I thought perhaps I could post the pages of my and Kate’s story online for anyone to read, and take from it what they will. I asked Brick and Jonathan and Kate, and they all were supportive of the idea, as were Tim and John at Soaring Penguin.

So here we are, from To End All Wars, prose by me, art by Kate Charlesworth, “Memorial to the Mothers” as our little but heartfelt addition to this centenary year, and, hopefully, a reminder to always, always hold those who would lead us into violent conflict to account, because it is those in power who make those decisions, but it is rarely them who pay the price in blood and broken bodies and heartbreak. 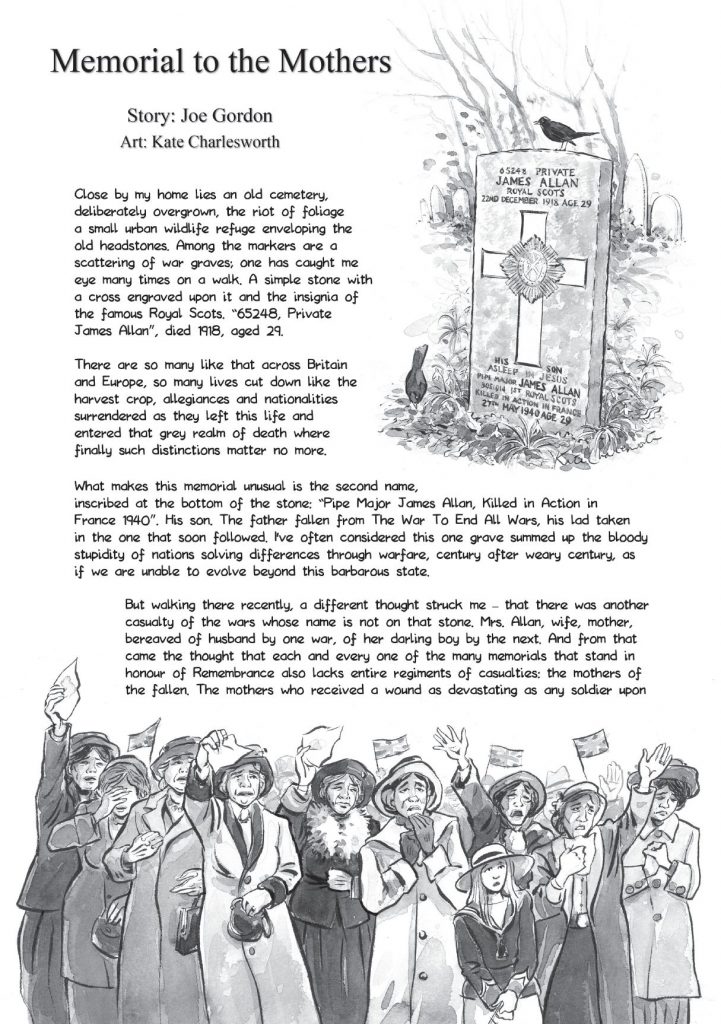 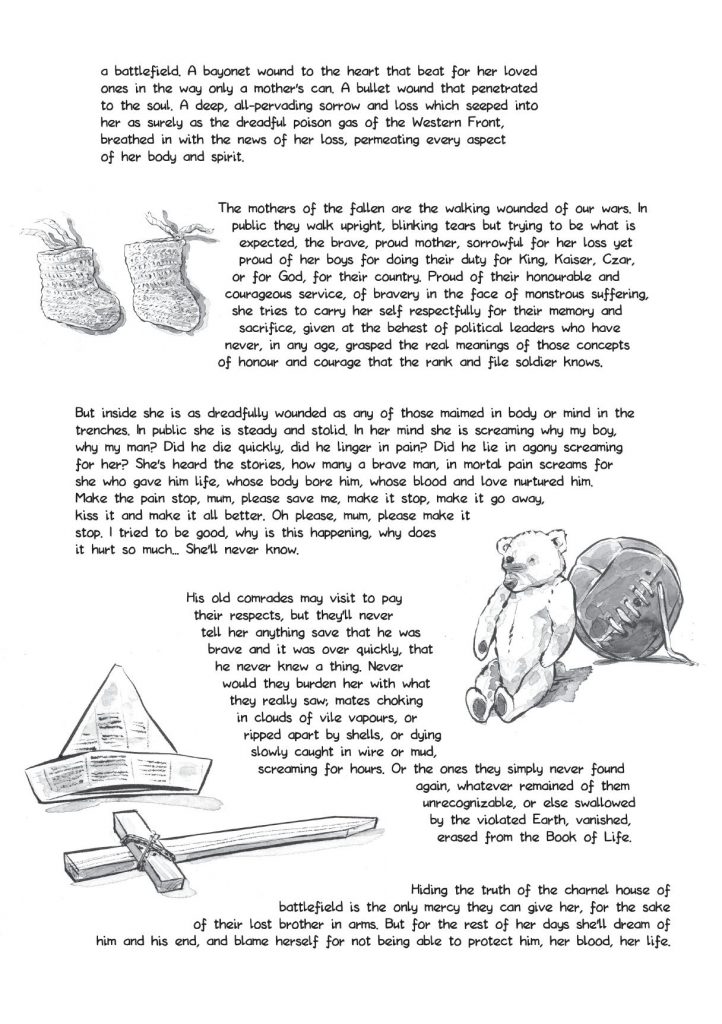 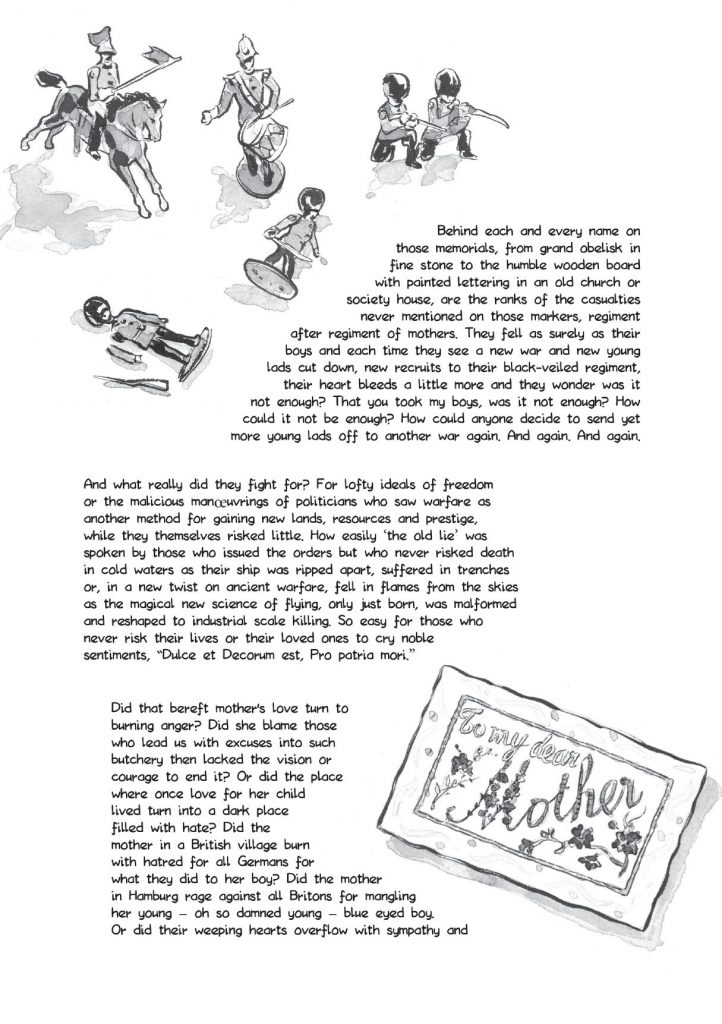 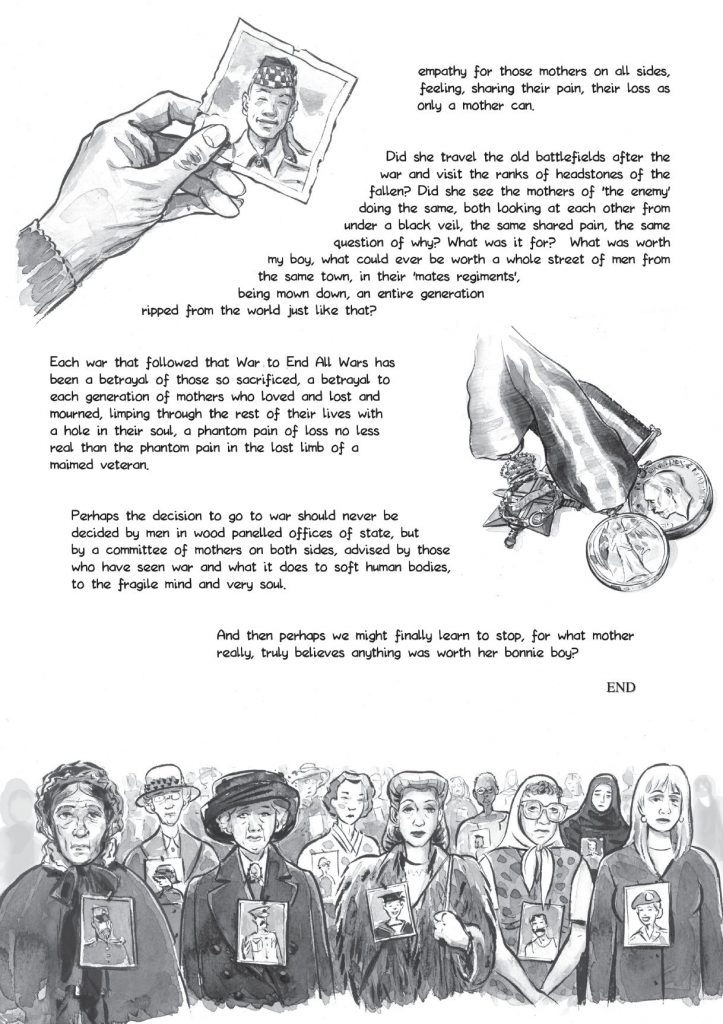 1 thought on “Memorial to the Mothers”