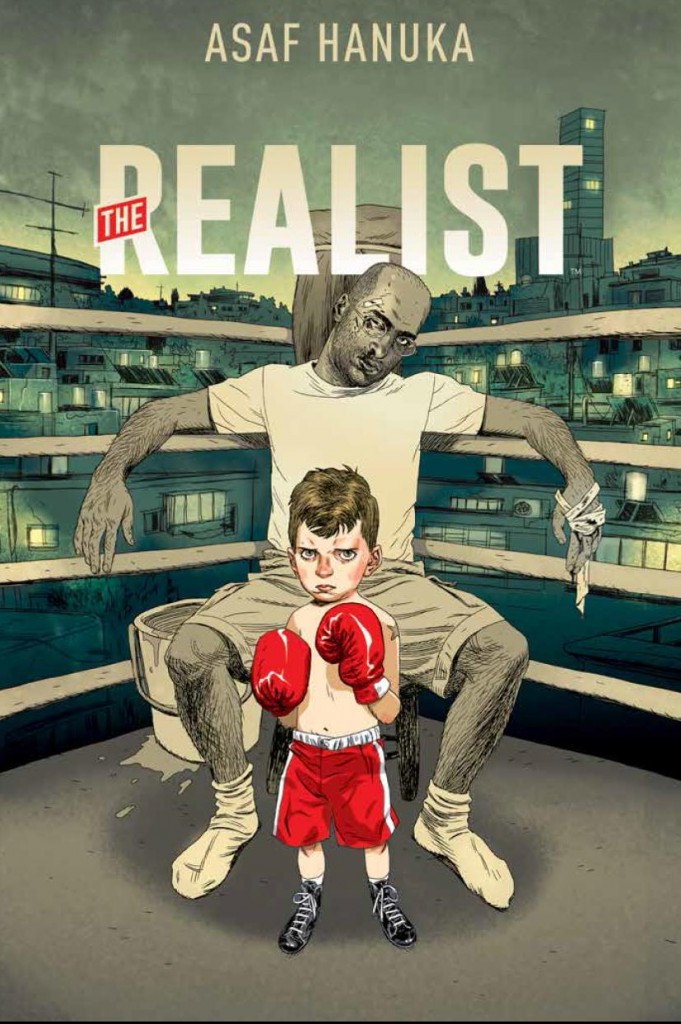 I first came across Asaf Hanuka’s work several years ago when he worked with respected Israeli writer Etgar Keret on a graphic novel adaptation of one of Keret’s short stories for Pizzeria Kamikaze (the same story was also adapted into the delightfully quirky film Wristcutters) and he was also a contributor to the compelling animated documentary Waltz With Bashir (which I reviewed several years ago here). In between those works and his lecturing and commercial illustration work he has been producing his series The Realist online. An old maxim teaches us we should “write about what we know”, and like many an Indy cartoonist Hanuka does just this, drawing (literally as well as metaphorically) on his own life to produce a series, usually of fairly short, one-page strips (sometimes longer, sometimes though just one single, large panel on the page – economical but very effectively done, a nice display of real skill), giving us a view of little vignettes of his family life, often peppered liberally with flights of fantasy.

Some of the tensions and problems in his life are, thankfully, ones most of us probably don’t have – for example as he and his wife have to knuckle down and start discussing the stressful matter of trying to get a mortgage and buy a place Hanuka intercuts their family finances discussion with the news on the nearby television warning of Iran’s plans for nuclear power and new missile technology and what this could mean for everyone living in Israel. It’s a clever riff on how daunting steps like taking a mortgage can be in your life, but it’s also perhaps alluding to the impermanence of everything; we view mortgages and buying a home as something so solid and lasting, but here he is thinking perhaps what is the point of this stress to buy a home that may be reduced to radioactive ash in a couple of years? This feeling of threat is found in a number of strips, such as when Hanuka notes that many of their friends are moving abroad “till things settle down” (for a war which as he observes, hasn’t actually started yet). 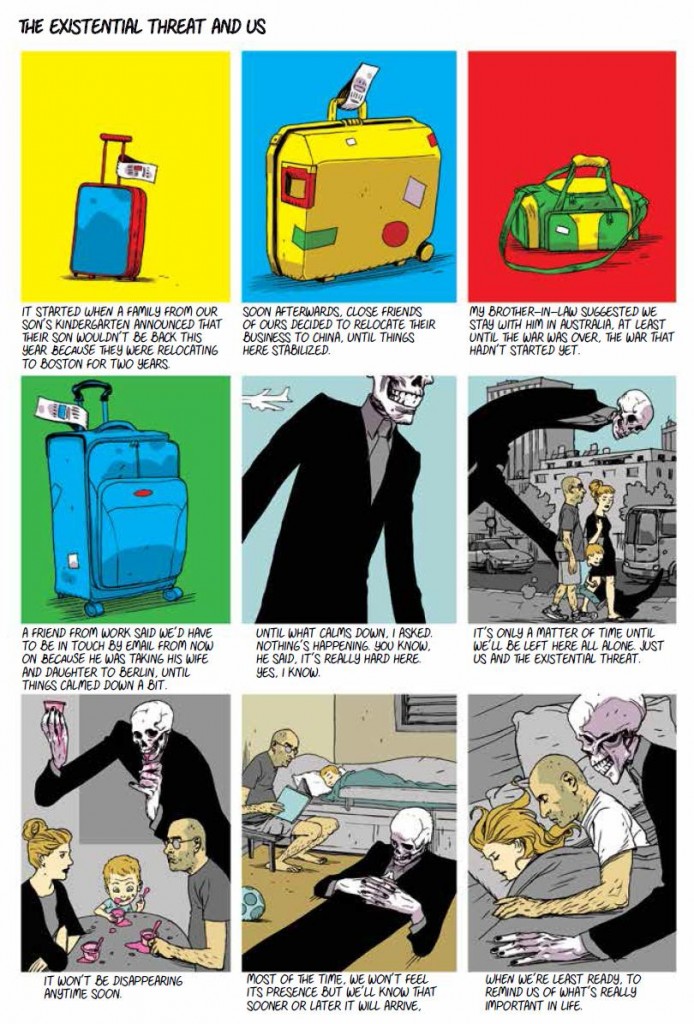 Most of the everyday events and problems here though are ones pretty much every person encounters: life, love, kids, parents, work, money, health… The difference being that most of us when we do vocalise our problems it tends to be in the pub with a good friend, but Hanuka puts it out on display, opening up his head, several times almost literally, using the imagery of opening his own skull or reaching into himself to pull things out, or visualising the little sudden daydreams and fantasies that run through all our heads every day. Oppressed by the mortgage talk and having to move out of their first family home he walks into his young son’s room, gazing at him sleeping contentedly, feeling that terrible responsibility and then looking at his kid’s toy and imagining himself as one of them down there on the floor, a momentary retreat from the relentless pressures of adult life into infancy. Although even childhood isn’t always a warm, welcoming place either, as one flashback to young Hanuka shows, as he gets his eyes tested, reading one of those charts in the opticians where the letters get progressively smaller, except this eye chart tells the boy “Life Isn’t What You Thought”.

Although he is quite self-critical about his own perceived faults or failings, I don’t want to give the impression this is a bleak collection, because it really isn’t, and in fact even when he is being hard on himself (too hard, perhaps), Hanuka regularly twists it so that there is a welcome dose of humour throughout most of this collection. His regular flights of fancy or daydreaming, the kind of thing we all do, add colour and humour as well as pathos – Hanuka as a superhero, cape, tights, but a bit dishevelled, workaday hero, carrying the grocery bags home, or in one particularly inspired one, trying to imagine himself as a better man. Not just a better man, better husband, better father, better artist, the whole package re-invented, and here visualised with Hanuka in Steve Jobs pose as if launching a new Apple product – bigger, better, sleeker, faster! It’s the new “iSAF”! Even as he imagines this much upgraded, improved version of himself as if he were a lifestyle product, the faces of family and friends appear around the edges of the daydream, not convinced that his new version is really going to do all it promises on the box (what about that memory upgrade so you can remember things like errands and anniversaries, eh?). The aspirations and dreams we’re sold and think will fulfill us (just like that!) falling short in the face of reality. 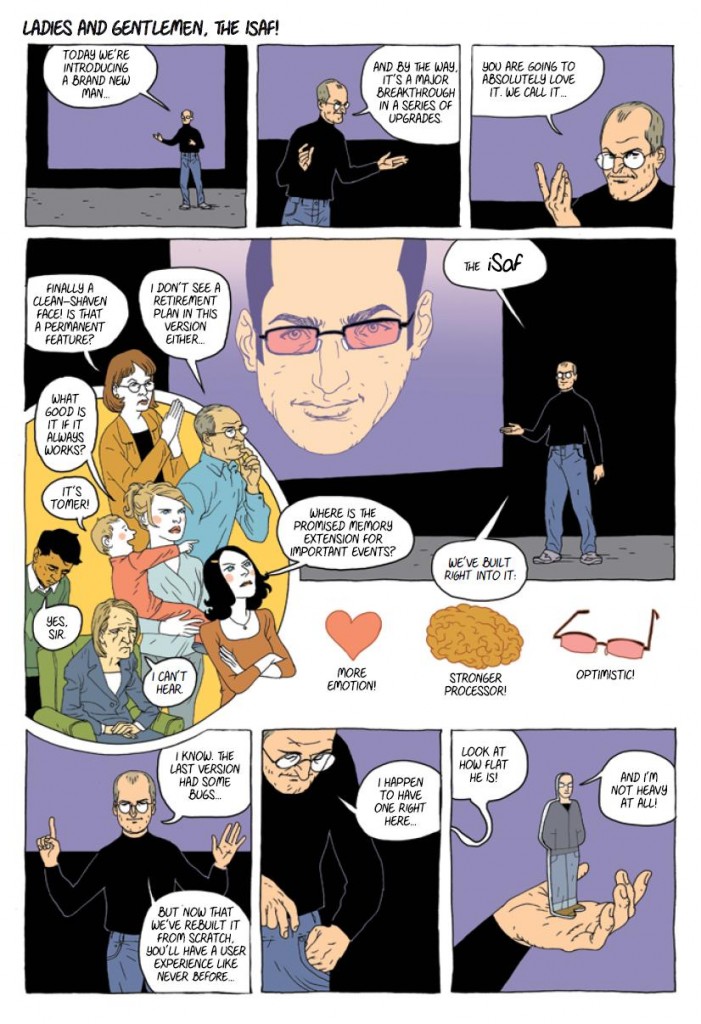 Some stories eschew the daydream elements and offer up problems I’m sure so many have encountered, such as taking his wee lad to school. I don’t want to go, daddy, no, daddy, don’t leave me here, daddy, don’t leave me… Tears, wailing, upset child, parent trying to explain they have to do this, it’s for their own good and feeling utterly, wretchedly guilty as their child cries watching them walk away. Cut to the boy two minutes later happily running around with friends at school playing with Lego, the trauma already forgotten for him as he plays, meanwhile unaware of this his father gets to work, sits at his desk, looks at the photo of his wee boy and cries with guilt for leaving him. The emotional hold others can have on us, most especially kids… Or explaining to his son why daddy is darker skinned and mummy is lighter skinned. I’m of Iraqi descent, she’s from Poland he tells him. But why are you different colours? Why am I white like mummy? You’re half white, half coloured, Hanuka tries to explain. His son looks at one of his toy animals, oh, you mean it’s like a zebra, right, as if to say duh, dad, why are you making this issue so complicated in that way only kids can…

And away from the introspection or self-criticism there are also little moments of pure joy – in grown-up mode Hanuka lectures his college class on this history of art, all serious, heavyweight, telling them off for their frivolous approach, that this is a serious subject they are approaching. Then as soon as he gets home he delights in reverting to a happy five-year old scribbling colourful doodles for the sheer pleasure of it because you can only be serious about Big Art for so long then need to remember it is meant to be fun. Or nice little touches comic fans will appreciate, like a visit to the great Angoulême comic art festival in France and observing many other creators and the fans interacting with them, including a lovely cameo by one of my favourites, Guy Delisle, with Delisle drawn in his own distinctive cartooning style. 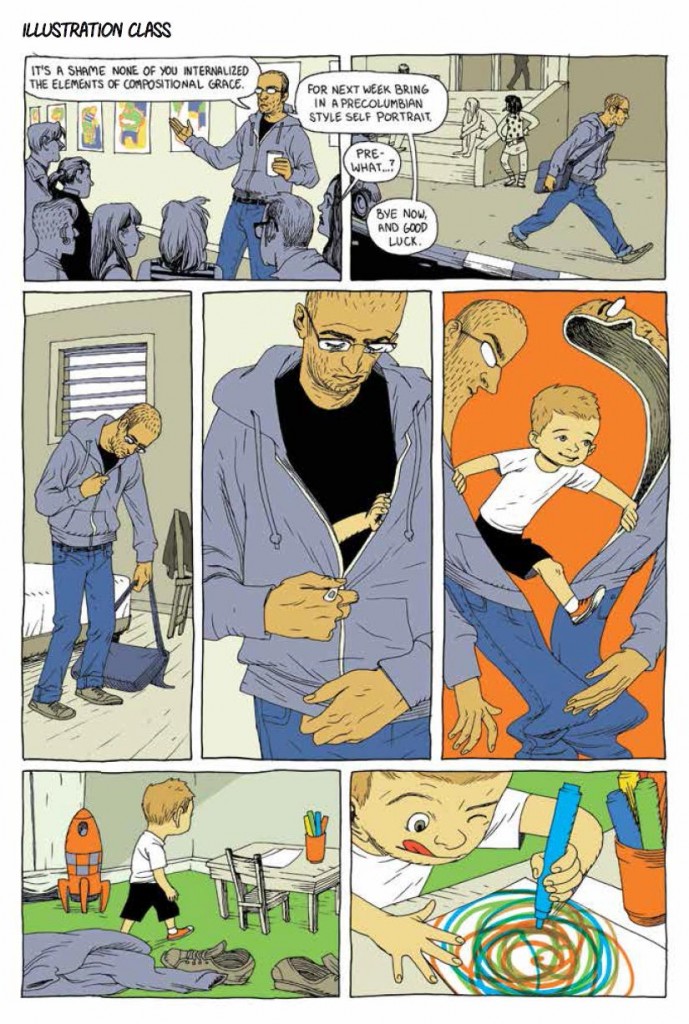 It’s a lovely collection – if you’ve read some online there is still much more enjoyment to be had in sitting back with this nice hardback edition Archaia have produced, and if you are new to Hanuka’s work then this is a fine introduction to his work. There are so many beautifully observed little moments and clever use of the comics medium to show his thoughts and feelings in a way that other mediums simply cannot do, and also some fourth-wall breaking, as he and his wife argue, Hanaka retorts “at least I am real” as we cut to a pen drawing him, or another scene where he muses on views from their apartment then the view the window cleaner gets and how “he sees everything from the other side, just like you do now.” I thought several times of other creators who do the “slice of life” approach mixed with such well-observed humour (the humour often less the outright joke variety, more the organic humour that just happens, because, well, life is often quite silly in so many ways), notably it put me in mind of the likes of Joe Decie, which is a high compliment as I rate Decie’s work very highly. It can be funny, it can be a little maudlin or introspective, it is a slice of life that we can all recognise; it’s wonderfully, warmly human, wrapped up in some lovely, clever cartoon art. 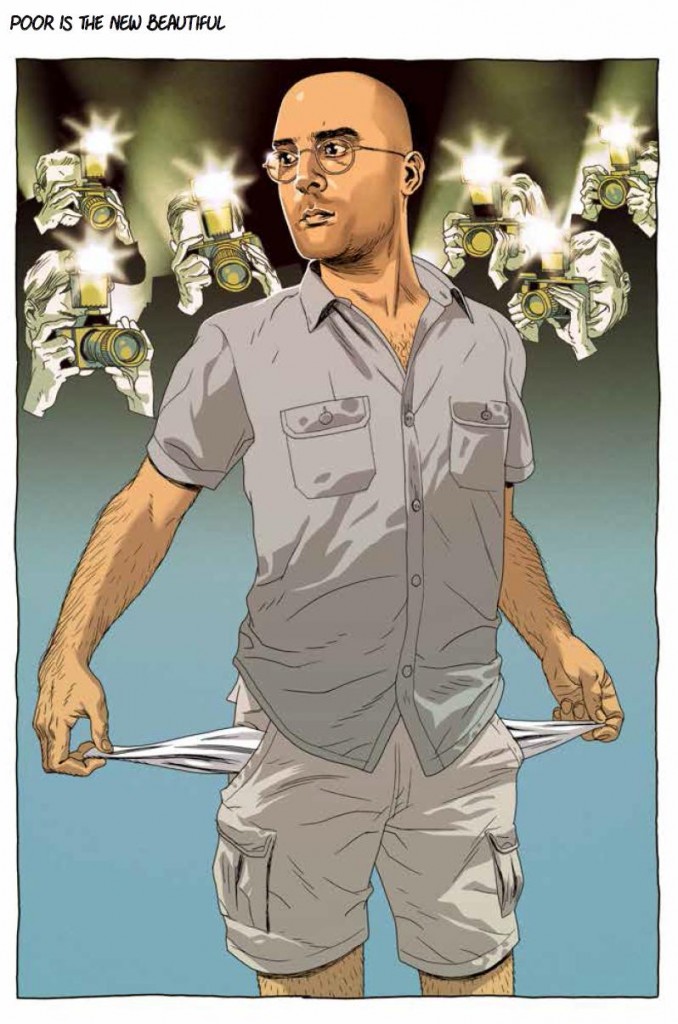