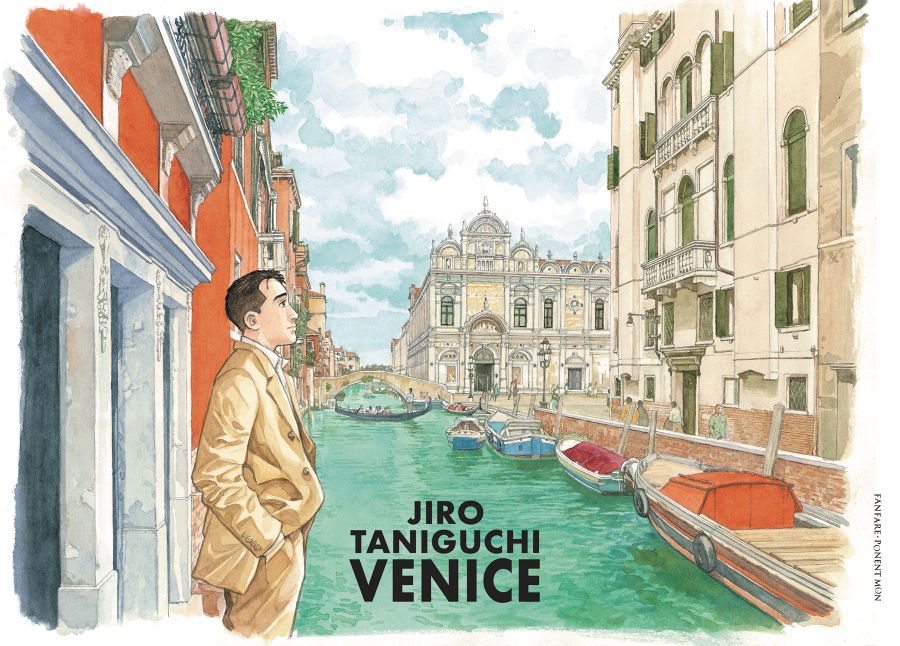 A while back you may recall Wim in one of his Continental Correspondent columns discussing a series of travel comics commissioned by famous fashion house Louis Vuitton, each by a different and well-known creator and taking in a different global destination. One of those was by the late, great Jiro Taniguchi (whose work on The Summit of the Gods, also translated and published by Fanfare/Ponent Mon, was highly praised on here by Richard), and I’m delighted to see Fanfare/Ponent Mon publishing it in an edition which makes it much more easily available than the special editions created purely for LV. And it would be criminal if a work this exquisitely beautiful hadn’t been made available to a wider readership.

Venice sees the artist visiting the ravishingly beautiful La Serenissima, driven more by a recently discovered family connection to this historic city on the water than by any mere tourist impulse (poor Venice, a victim of its own success, is now so inundated with legions of tourists, while her own population declines, that it has become a huge bone of contention with remaining Venetians). Following the death of his mother, the artist finds a fine, lacquered box, and inside a series of old photographs, taking in a young Japanese couple, and some with a small child, snapped in Venice, and hand-painted postcards of the coty. One features the iconic Piazza San Marco, with the couple feeding the pigeons, and from the clothes and style it looks as if it were taken in the 1920s or 1930s. Was this his grandmother and grandfather in Italy? Is that his mother as a young girl alongside them? His mother never mentioned much about his grandparents and nothing about a trip decades ago to Venice. He decides to visit and try to retrace their steps, as best he can. 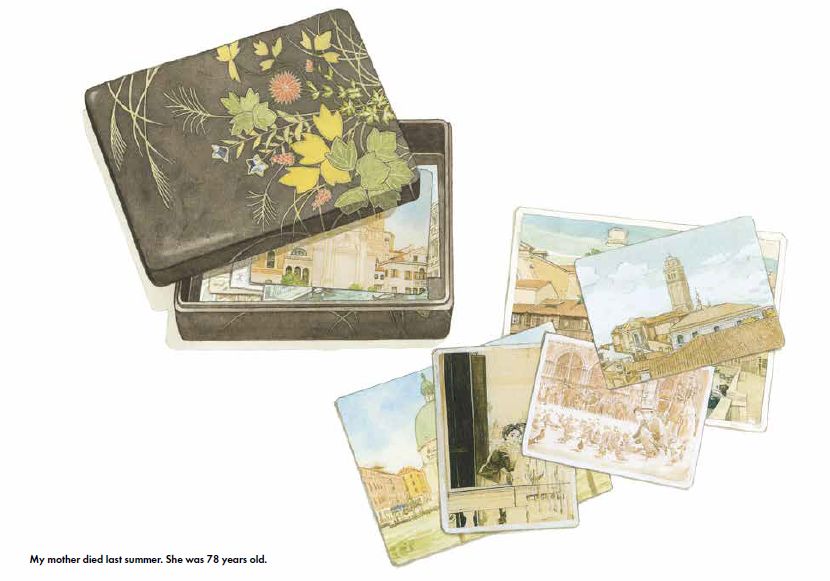 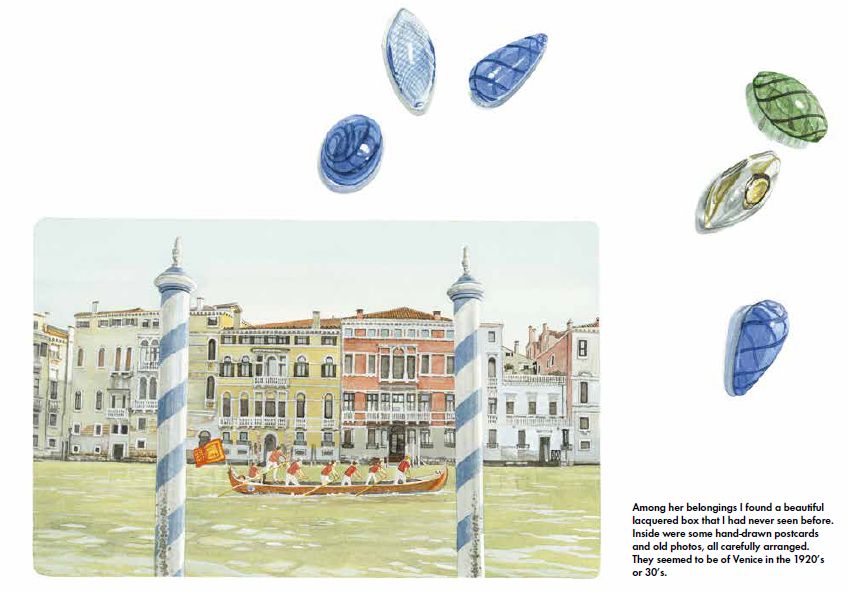 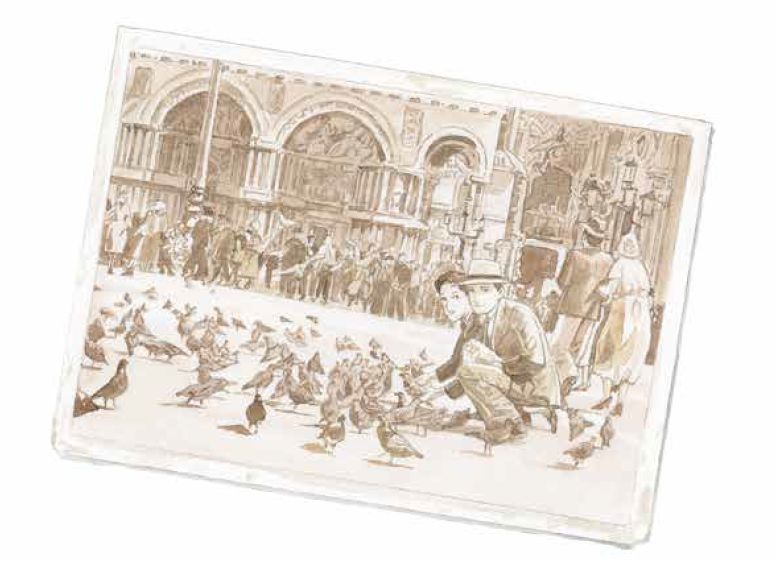 Eschewing a more common comics layout of sequential panels and speech bubbles, here Taniguchi instead opts for something more leisurely-paced, mostly taking the form of a series of individual paintings as he walks around this glorious, ancient city, ravishing watercolours that you can lose yourself in, with only a small amount of text here and there. The effect is like looking over Taniguchi’s shoulder as he strolls around, pausing to drink in the sights and sounds and scents of Venice, and there is, to my mind, something highly appropriate about this approach, given that Venice has, for centuries, drawn artists and poets to her canals and elegantly crumbling grand architecture to paint her, write about her, compose sonnets, it became an integral part of the Grand Tour.

Taniguchi, with his delicate style, gentle pace and eye not just for detail, but also, crucially for a location like this, for the quality of light, and how it changes, is simply perfect here. He’s not just depicting the city through his walks and visuals, he’s practically taking us there. You can almost smell the saltwater of the lagoon and canals, feel the texture of some of those centuries-old buildings fighting their slowly-losing battle against the tide of time and element. The ravishing richness of a marbled church interior is as lovingly depicted as the wall of a family home, you can see some of the old plaster rendering coming away and the bricks below, and you feel you could run your hand along the wall as you walk past with Taniguchi and feel its texture against your fingertips. 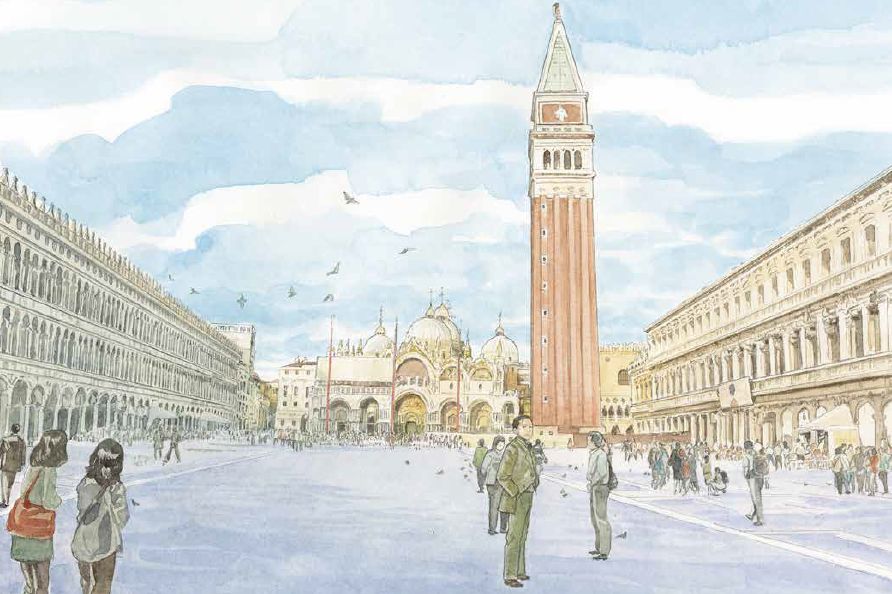 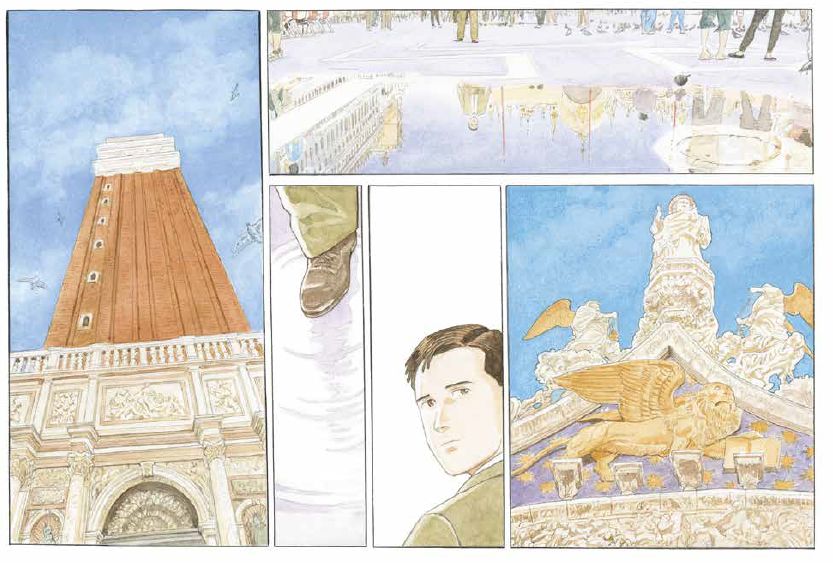 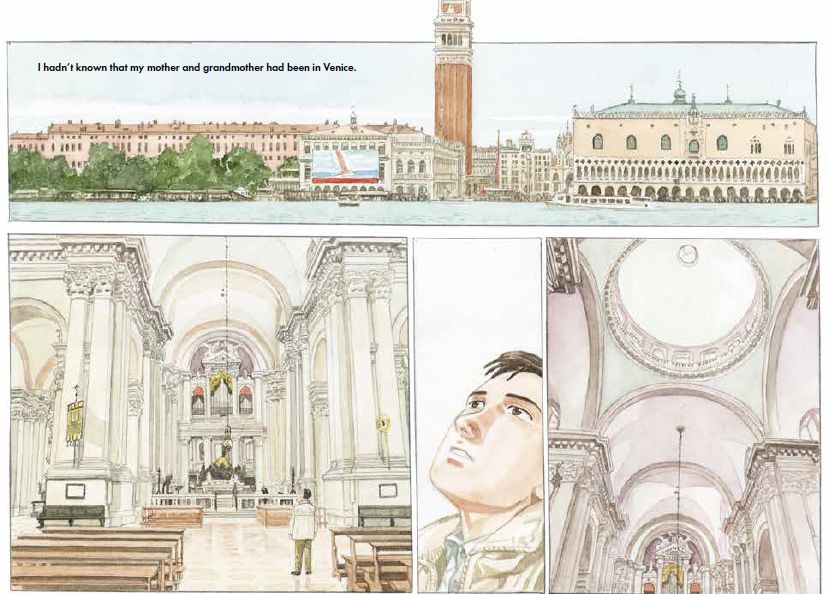 The quality of light changes as the skies brighten blue then cloud over, and Taniguchi’s gorgeous art reflects this, from the clear blues over the Piazza San Marco or an aerial view of the islands and lagoon, basking in the Adriatic sunshine, or the gloomier, watery grey light of a rainy day in the north of Italy. As we follow him around we get to see, as you may expect, many of the city’s remarkable landmark structures, but this is mixed beautifully with an artist’s eye for smaller details, from the swinging of bells in the church tower to close-ups of the people and wares in the local street markets, or reflections in a puddle of rainwater on a city square. It’s wonderfully immersive, the paucity of text leaving the visuals to carry us, and oh, that is such a good decision on Taniguchi’s part, because it allows us to be drawn in until the reader feels like they are walking with the artist alongside the canals, over the bridges, pausing for as long as we want to drink in the surroundings.

The fact that he is following a part of his family history he never knew adds a lovely, emotional element to this beautiful work, as he tries to recreate the routes his grandparents took through Venice, working from photographs but also hand-drawn art from the period, crafted by his grandfather. Past and present and family history connect through this ancient city and through art, old and new, and it simply wonderful to take in and lost yourself in. 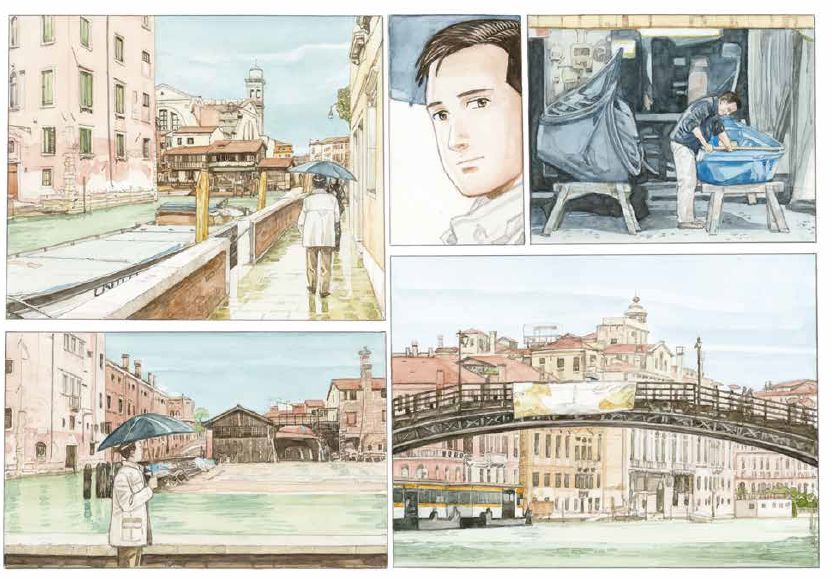 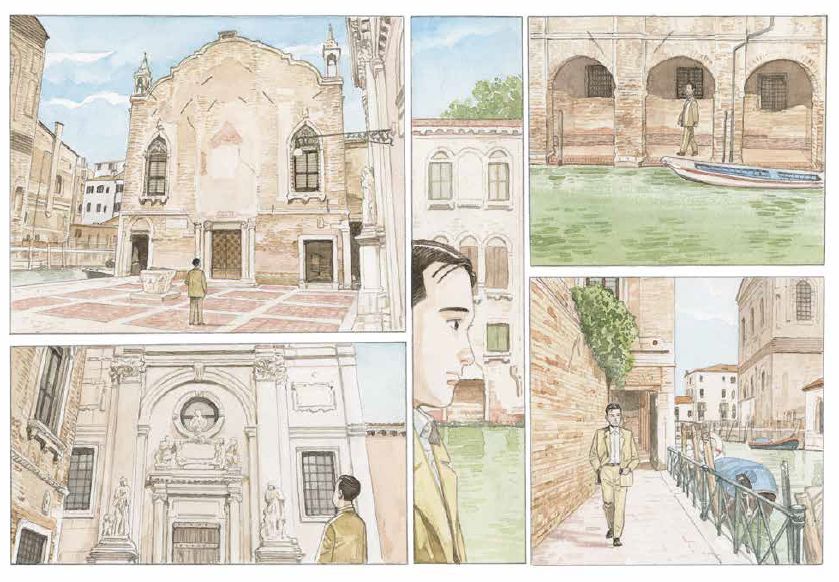 I also found myself pondering family history, my own this time – quite a number of years ago one of my family visiting relatives in London looked at some very old postcards at a kiosk. Very old, black and white postcards, the types with the crinkly edges rather than straight, people feeding the pigeons, just like Taniguchi’s postcard, but here it was Trafalgar Square rather than the Piazza San Marco, and in the old postcard? My grandfather. Snapped unknowingly decades before, preserved in that instant on postcards and found decades after he was gone. A magical gift from the past, washed up on the ebb-tide of time. For me that added another, personal element to Taniguchi’s artist retracing old steps from the past, but in truth that was just an extra topping on the dessert of this delicious, lusciously-drawn work. Lose yourself in this book. 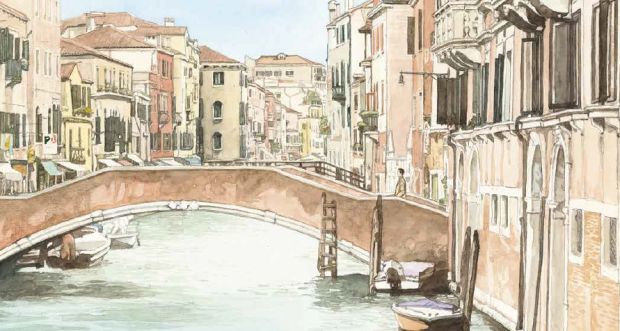