Interview With the Vampire – Claudia’s Story

Based on the novel by Anne Rice, adapted by Ashley Marie Witter 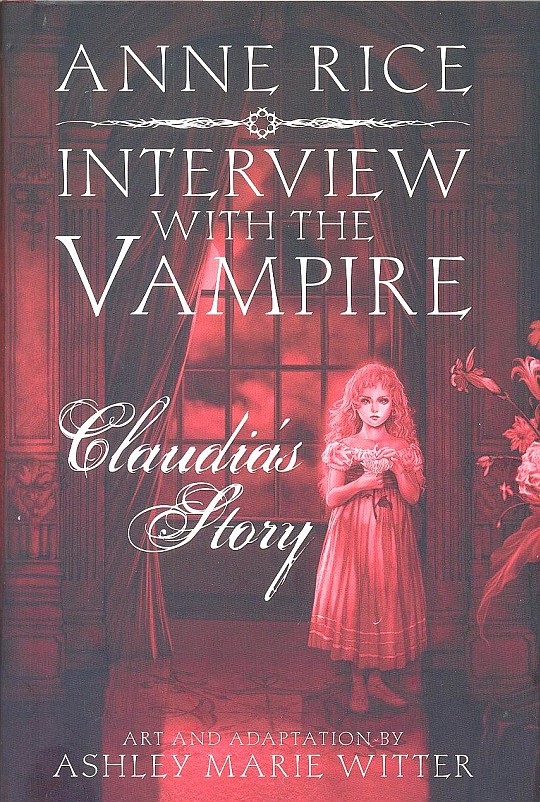 I’ll start by confessing straight up that Anne Rice’s Interview With the Vampire is one of my favourite novels. Originally published in the mid 70s it has sold in the millions and spawned a connected series, the Vampire Chronicles as well as a beautifully shot film by the very fine Neil Jordan. It is also one of the most influential novels in the vampire literary cannon, arguably as important to the genre in the 20th century as Stoker’s Dracula was to the 19th; both books are landmarks in the genre. I’ve re-read it several times over the years and in fact re-read it again just a few weeks before this adaptation arrived on my desk. It isn’t the first time the Vampire Chronicles have been adapted to the comics medium – I still have some of the Innovation comics adaptations in my collection (see here). However this is not a straightforward comics interpretation – instead Ashley Marie Witter has taken the original tale, which saw the 200 year old vampire Louis de Pointe du Lac narrating his life story to a young reporter, from his mortal life in the late 1700s plantation near New Orleans to the present day, and retold it, but this time from the perspective of one of the most singular characters in the novel – and indeed in all of vampire literature – the child vampire Claudia.

Ashley begins the story with a seriously ill Claudia – a beautiful young girl with a doll-like face and golden curls – being brought across by Lestat, the older, dominant vampire who made Louis into his immortal companion. As a shocked Louis watches, Lestat gashes his own wrist and offers it to Claudia, telling her she has to drink to get better from her illness. The human child drinks from Lestat and is transformed into an immortal vampire, endless, unchanging, in an incorruptible body that survives on a diet of human blood each and every night. Lestat has his own motivations for his actions – knowing that Louis is increasingly unhappy living with him he creates Claudia to be their ‘daughter’, her diminutive size and appearance making her as dependent on their support for her survival as any mortal child would be to its parents, locking Louis to him and their lifestyle, effectively forming an immortal, blood-drinking family unit. Realising what he has done calls Lestat a bastard and a fiend, while Lestat merely smiles in satisfaction, “such language in front of your daughter,” he mocks. I’m not your daughter, the little voice pipes up, I’m my mama’s daughter. Not anymore, Lestat informs her, now you are mine and Louis’ daughter… 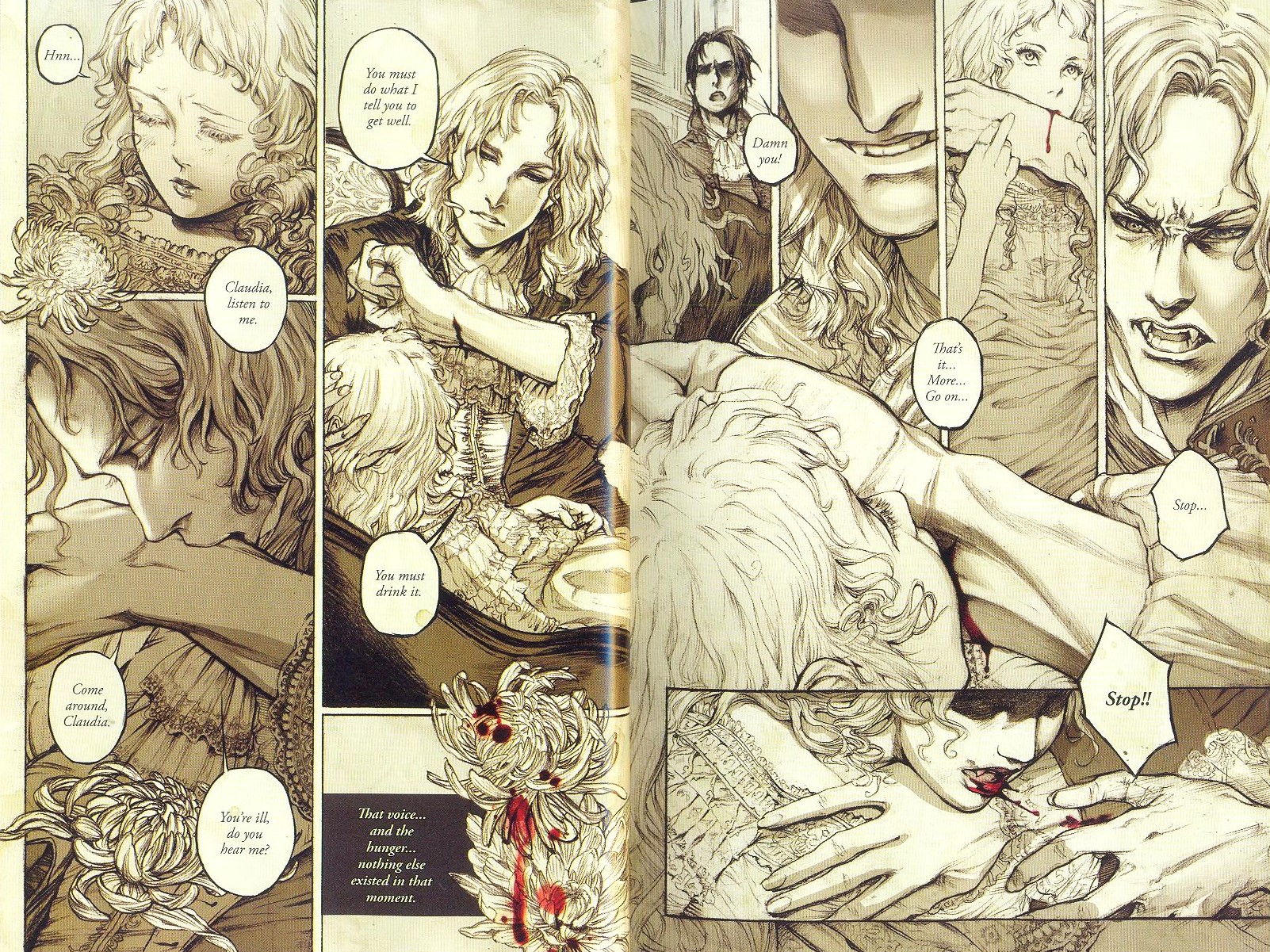 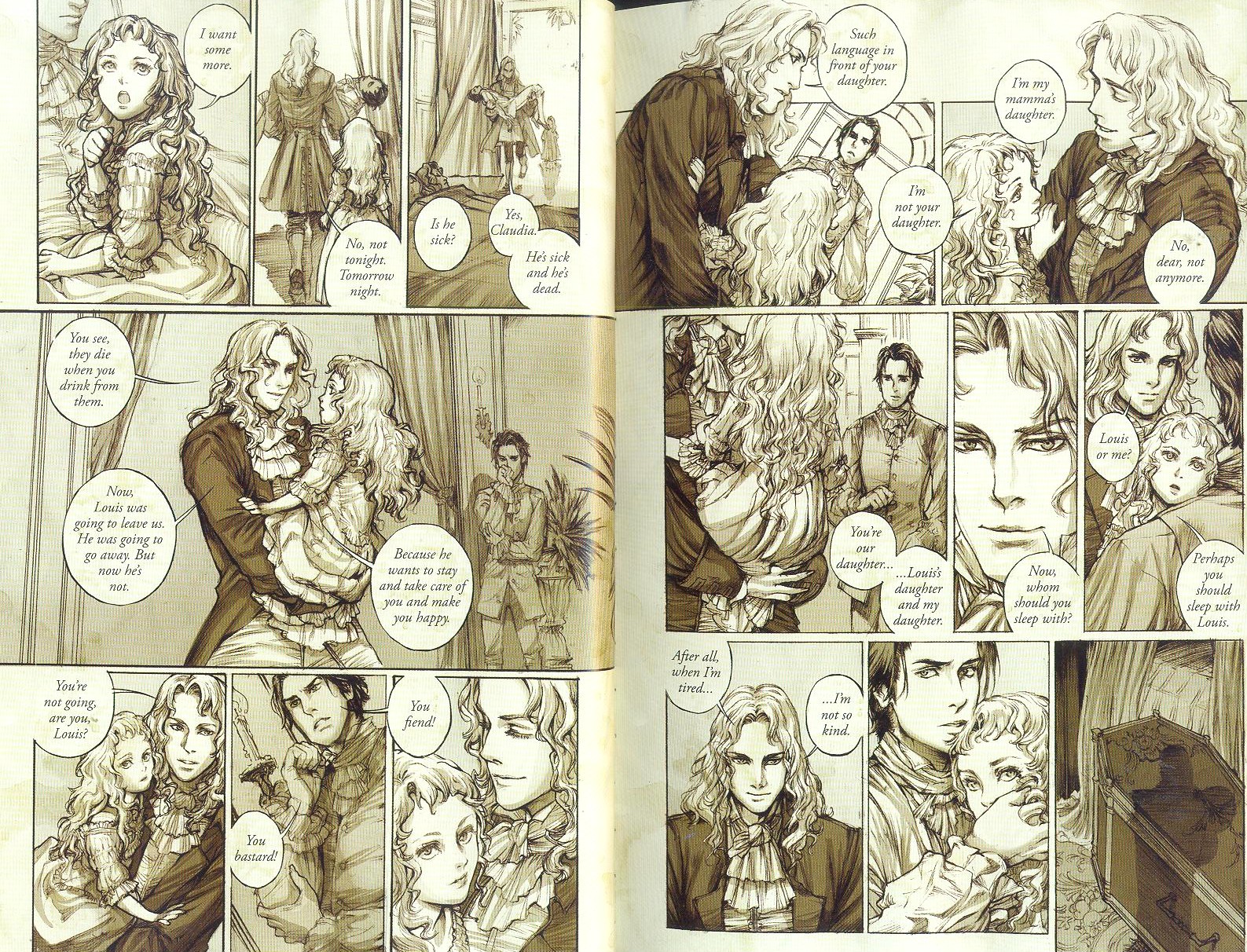 As obvious and transparent as this gambit is, it works – Louis, the sensitive soul who finds immortal life difficult, wrestling with the morality of his existence, of the need to feed on human beings to sustain immortal life, cannot bring himself to leave with Claudia there, for her to be left only with Lestat to look after her. And so the trio settle into an uneasy family life – as with any family the child learns from both her carers. From Louis she learns an appreciation for the arts and the finer things of human existence, while from Lestat she learns the art of hunting and killing her human prey, something she takes to with great enthusiasm. Louis, the more nurturing of the two, is the one she loves, Lestat less so, but she still pays attention to the lessons he can teach her, until as the years pass she realises that he isn’t prepared to answer some of the deeper questions she starts to formulate, particularly regarding their own existence – why are there vampires, how did they come into existence, which vampire made Lestat and why does he never mention him? He becomes regularly enraged at her questions and when he refuses to explain she decides he simply doesn’t have the knowledge she desires but is reluctant to let her or Louis know, preferring to pretend to have access to secrets about their vampire nature that they may need for their survival.

At this point it becomes clear that she enjoys provoking him over such points and at first it might be easy to see this as the actions of a child. But Claudia, despite her deceptive appearance, is no child – decades have passed since she received the Dark Gift, and while like all vampires her body is forever fixed as it was at the moment of her mortal death, her mind has grown. She is now a mature, experienced woman, realising that while she may be a swift, immortal predator, she is trapped inside this child’s body – forever. She cannot physically grow up and this, along with her growing desire to know why ‘her kind’ exist and the fact that, denied a real childhood, she has grown up with a lack of empathy and human morality (unlike her ‘parents’ she did not have the luxury of experiencing human life for long to ground her for later life), will trigger an explosive, bloody rupture in their artificial family… 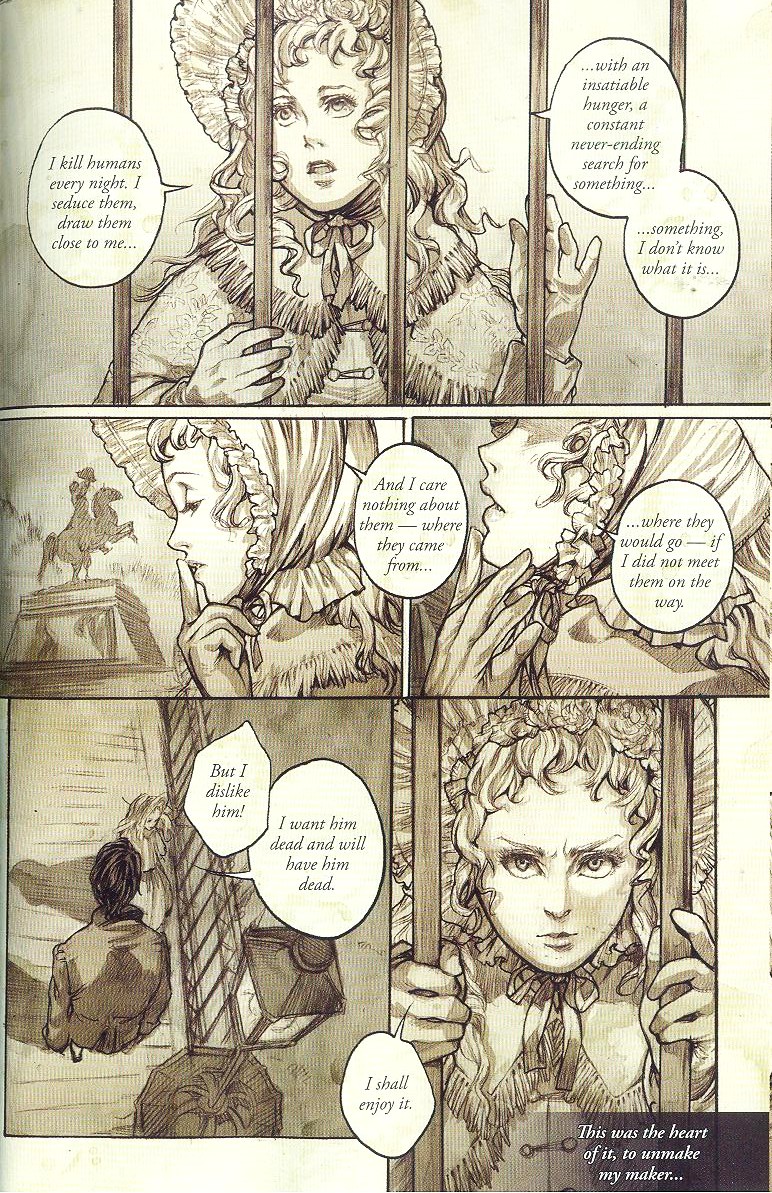 There’s much more, but I don’t want to spoil it for you if you haven’t read the original novel (and indeed if you have read it, you may know the major events, but I don’t want to spoil how they come across when viewed from Claudia’s point of view). Ashley handles portraying both Claudia’s childhood innocence and her later knowing, determined adult personality with a deft touch – since her physical body cannot change much of this has to be conveyed through gesture, expression and body language, a task the artist achieves magnificently, moving from beautiful child to cold-hearted, century old immortal killer with the small change of facial expression. In one scene the panels move closer and closer to Claudia’s doll-like face (and indeed despite the decades passing both her fathers still treat her like a beautiful doll), until the perspective zooms into a close up of her eyes, which are the eyes of a predator, of a cat, glowing, shining, luminous – beautiful yet dangerous because you don’t know if the mind behind them is regarding you with amused condescendion or if they are sizing you up as dinner. 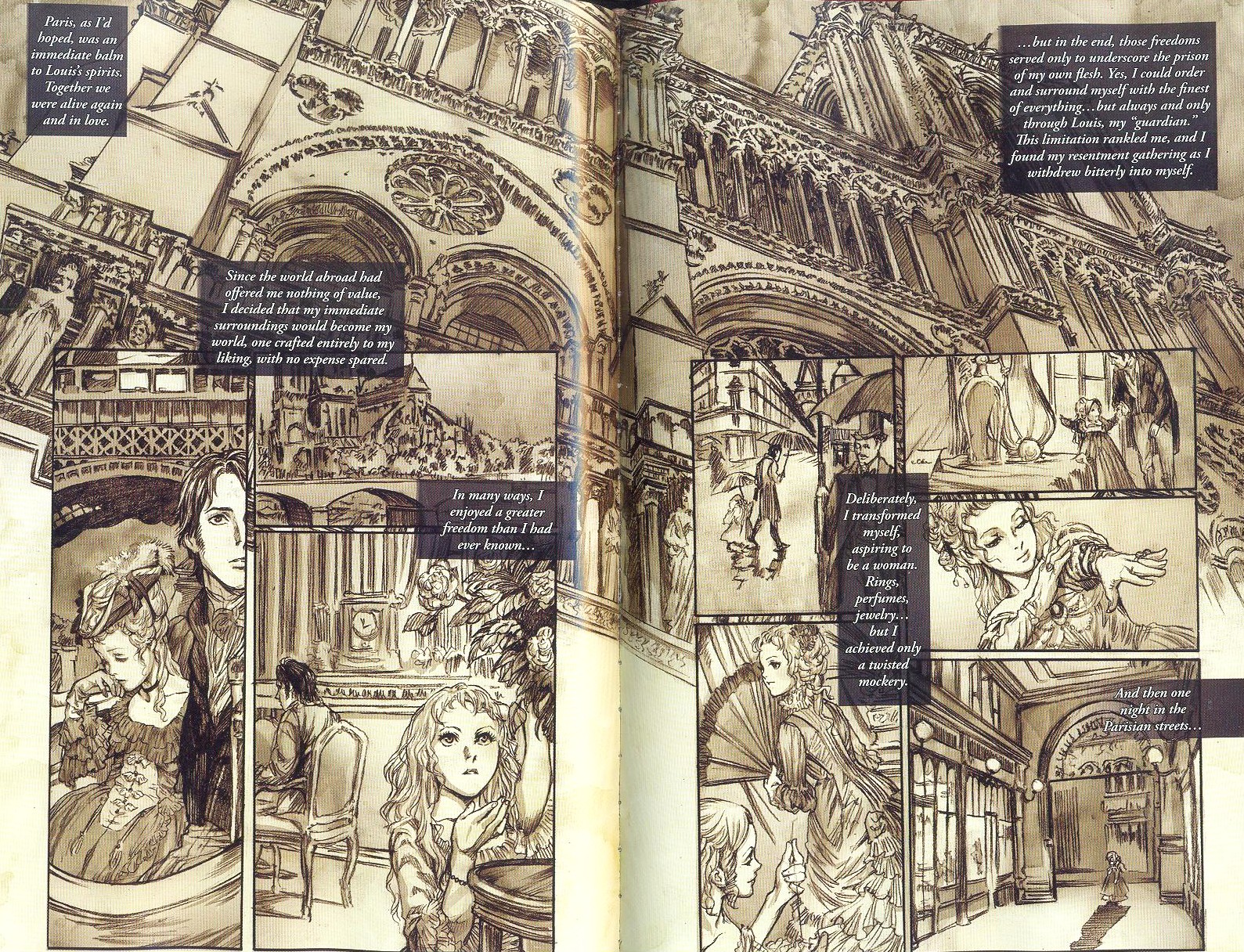 Reframing the original events from Claudia’s perspective raises this beyond simple  adaptation (not that there is anything wrong with a straight adaptation) and to someone like me who has read the original series it seems kind of fair – the novel of Interview is from the point of view of Louis, the second novel, The Vampire Lestat, allows Lestat to comment on those events from his perspective, but Claudia, until now, didn’t receive such treatment. Ashley’s artwork is absolutely delicious – you may remember quite some time ago I posted a piece of art from the book when it was first announced she was working on it, and it was a gorgeous looking piece of work. Well the finished book is even more beautiful, the artwork mostly sepia-tinted (except for expressive scarlet splashes of blood dripping from fangs, or in blood tears from the eyes, which stand out with the vibrant hue of the blood in the early Hammer films when they were introduced to audiences more used to black and white), and wonderfully delicate and as lush, sensual and decadent as the original novel itself; this is one of those comics works I will find myself going back through again to pore over some of the delicious artwork. The erotic subtext of the original is preserved and, as with the novel, delicately layered through and hinted at rather than too obvious. The book itself is a very handsome small hardback, good stock glossy paper that shows off Ashley’s beautiful artwork to great effect – not just a good read but an attractive addition to your shelves; much recommended.