In This Corner of the World,
Directed by Sunao Katabuchi,
Starring Non, Megumi Han, Yoshimasa Hosoya 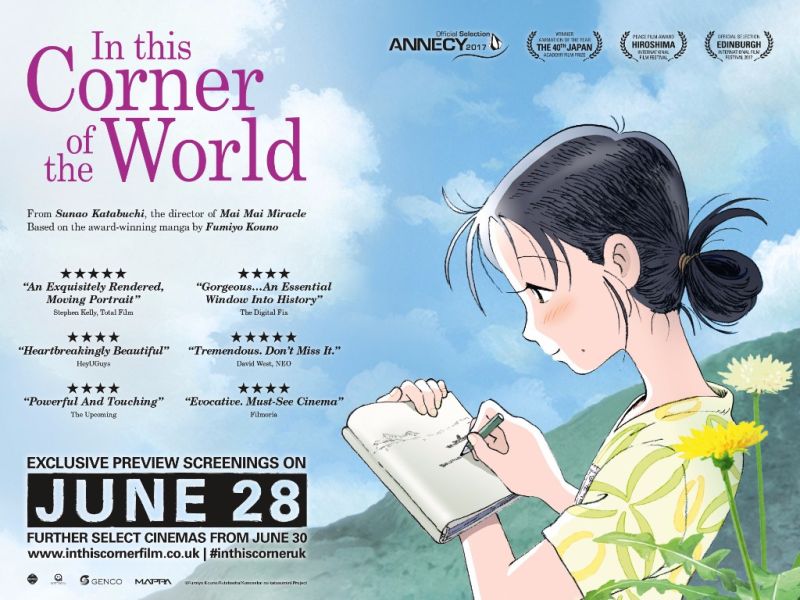 This animated film, based on the manga by Fumiyo Kōno, has been huge in Japan, and I’ve been eager to see it, so when it appeared on the programme for this year’s Edinburgh International Film Festival I booked myself a ticket right away (for those not lucky enough to get to the festival, it is getting a limited UK release over the next couple of weeks, so check your local listings). I was not disappointed; this is a beautiful piece of animation, and quite emotionally satisfying too.

The story is set in 1930s and 1940s Japan, and although the Second World War will be an important part, this is not a war movie. At least, not in the usual sense of a war movie – this is a slice of life, following a young woman, Suzu, from childhood through to early adulthood and marriage, and the wartime years give us a view of the conflict from the perspective of the home front, of civilians who don’t really know what it is all about (only what strictly controlled propaganda the Japanese government give out) and are, basically, increasingly caught in the middle of this titanic struggle, some of them paying the price for events they never instigated or had any real say in, just like untold legions of ordinary civilians through every war in history. 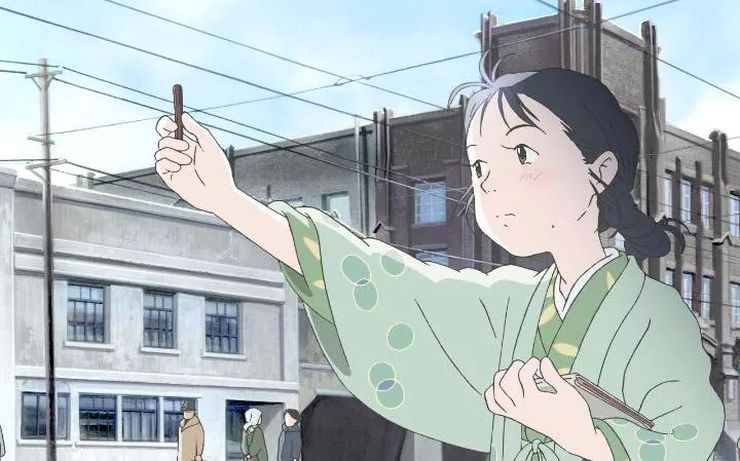 But the war, while important and having lasting ramifications for Suzu and her family, is only one part of the tale here – this is Suzu’s story of her life, not of the war, we concentrate on her and her family, and that gives the whole film a huge amount of emotional resonance. We see her as a little girl, helping her family to collect and dry seaweed, the story littered with loving little details of a bygone era, such as their family, on one special day of the year when the tides are exceptionally low, able to walk right across the now waterless bay to visit their relatives on the other shore (and rush back before the tide returns), a reminder of a time when most ordinary people rarely moved much further than their own small town (trains are pricey and cars very rare). This is a time not really that long ago – we’re talking about the sort of world many of our own grandparents would remember.

We see Suzu as a girl, a bit of a daydreamer, and an artist – a good one, at that. And she has an affinity to often see the art in many situations, although this often means she loses focus on the here and now (in one scene during an air raid the puffs of smoke from the anti-aircraft fire become a beautiful Impressionist painting to her eyes – gorgeous but it also means she is too mesmerised to take cover…). Her family lives in Hiroshima, but when she turns eighteen Suzu is offered marriage to a young man she doesn’t know. It’s not an arranged marriage, as such, the families discuss it, and it is clear she can say no, but although allowed, it’s not really the done thing. And so she goes to live with her new husband and his family in Kure, some distance from Hiroshima (again, like her family across the bay it isn’t that far, not to us with cars and fast trains, but back then it’s a big wrench). Kure is a major naval base, and as Suzu settles into her new life the ships of the Imperial navy are a backdrop – her husband is a civilian navy worker, and her adorable little niece Harumi loves looking at the ships and telling her new aunt which ones are which, while she sketches (this leads to an ugly scene where the military police almost arrest her as a spy for sketching the ships in the bay – this was a time where Japanese citizens could be arrested and disappeared for anything that might hint at questioning the wartime government). And of course as the years roll on the war draws closer – and a naval base like Kure is, inevitably, going to become a target. And such are the horrible fortunes of war that we know it won’t just be the military or industrial targets which end up in the bomber’s crosshairs, it will be the town, the people, including women and children.

In This Corner of the World powerfully illustrates the indiscriminate horror of mass bombing – this is Japan (at this time “the enemy”, as if that makes it any better), but it could have been Clydebank, Coventry, London, Dresden, Guernica or the cities of modern Syria, or anywhere else where civilians are seen as “collateral” damage, and the film shows this both on the personal scale for her family and friends, and on the wider scale (those classical wooden Japanese buildings razed to the foundations by fire-bombing, street after street gone). The atomic bombing of her hometown is, understandably, a major moment, and one we, with the benefit of historical hindsight, know is coming closer and closer, until the day we see that huge flash in the sky, and the awful blastwave that follows. 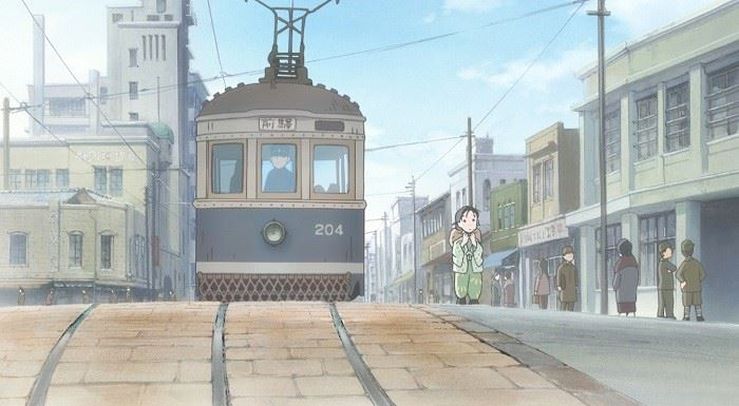 But while the film shows the hideous aftermath of this first use of nuclear weapons, it doesn’t just show Horishima as the city that the Bomb was dropped on, it shows us the city in the years before, a real, living place and people, and brings it to life, based on the memories of some older survivors and on period photographs, the now iconic Genbaku Dome – the Atomic Dome, one of the few structures close to the blast which survived, and is now a symbol of both the horrors of warfare and the need for peace – clearly visible as tram cars and people pass in the streets, then again in the irradiated ruins afterwards, but then there it still is, after all this passes and the city is reborn. 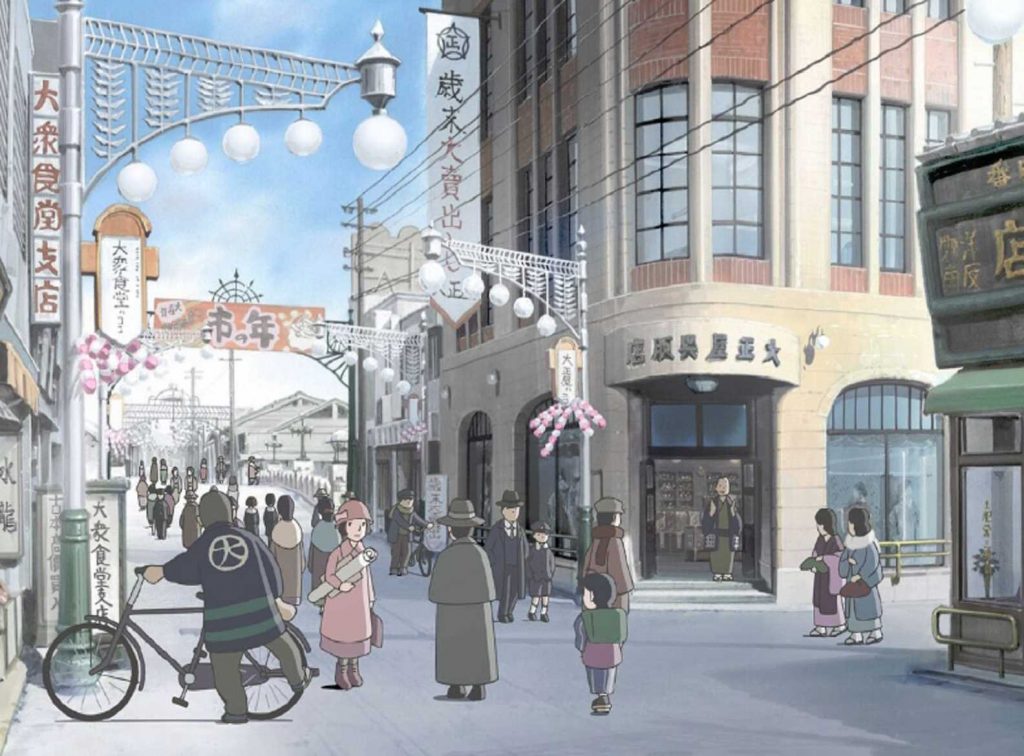 In This Corner of the World brings us happy moments and very sad ones, some utterly beautiful scenes and some steeped in sorrow; despite the intrusion of the huge, global-altering events of the war, it is, at heart, a family story, a story of a life, with the ups and downs, the moments that we all get, the moments where we feel life has broken us beyond repair but then the moments that make our souls sing with joy, and make it all worthwhile. This is an utterly gorgeous work, and one best seen on the big screen.

This review was originally penned for the Forbidden Planet International Blog