The Fade Out Volume 1,

Like all the best Noirs, The Fade Out is set in that strange, twilight realm between night and day, the everyday, normal life and the shadow world’s intrigues and weird ways, forever in the shadow of the War. It’s 1948, and places don’t come much more in-between reality and perverse fantasy than Hollywood, it’s manufactured dreams, carefully designed and polished stars and the powerful moguls behind the studios.

Charlie Parish is a screenwriter, working away on another new film, one designed to finally make Valeria Sommers the huge star the studio owner Victor Thursby thinks she should be, the “next Veronica Lake”. There are only two real problems for them – aside from the usual power plays, deviancy and gender abuse going on in Hollywood’s old studio system – but they’re fairly major problems. Charlie can’t write anymore. He tries, but the bright spark that marked him out as a rising star scriptwriter a few years ago was crushed out during the war. Fortunately his friend Gil works with him – Gil has already been blacklisted in the start of the reds-under-the-beds scare as the Cold War slowly works its way into American life, so no studio will touch him; now he works covertly with Charlie on the scripts he’s meant to be writing but can’t, a delicate but mutually beneficial arrangement. 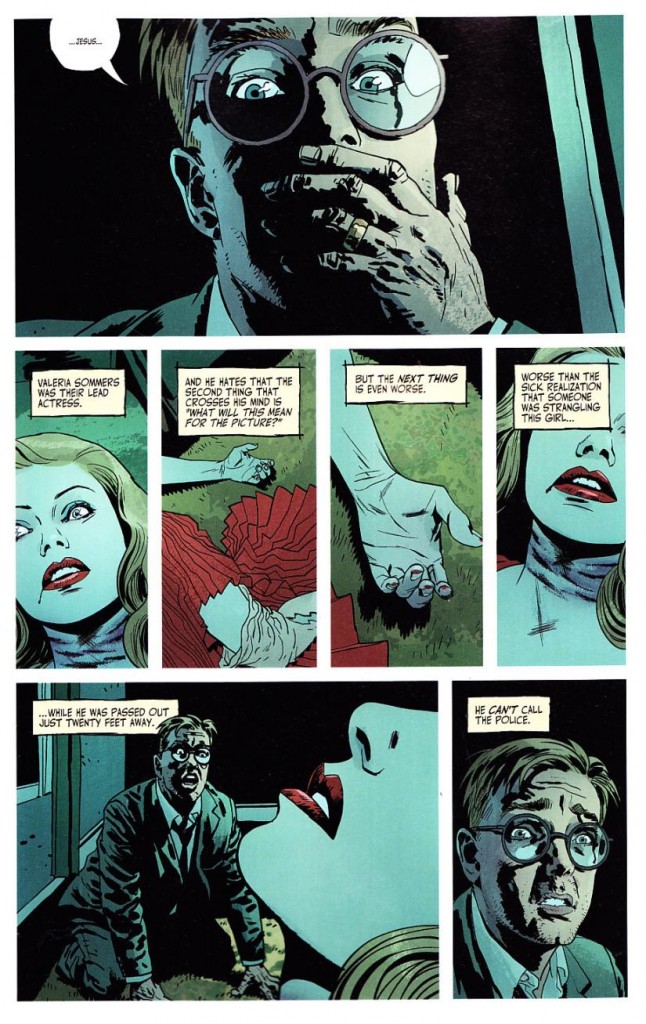 And the second problem? That’s slightly harder to fix than Charlie’s writer’s block. Valeria is dead, only a few pages into the story. Strangled and left lying on her living room floor. And what’s worse is a hungover Charlie wakes in her bathtub and finds the body, realising he must have come home with her after an out of control party the night before and that whoever murdered her did it while he was drunkenly asleep in the next room, totally unaware. Knowing he would be the prime suspect if discovered he carefully conceals any evidence of his own presence in her house and leaves furtively, later pretending to be shocked when Dottie, one of the studio’s press team, tells him the news of Valeria’s death.

Sick at her sudden, violent death and even sicker at the thought he’s had to lie about it to protect himself, Charlie’s already war-damaged psyche and moral guilt compass is about to be kicked in the head, when the studio’s head of security lets slip to him while talking to the police about the case that Valeria hung herself. But Charlie knows she didn’t – she was strangled, murdered, but he can’t say without admitting that he was there and covered it up. But if he doesn’t then the murderer walks free…

“He looks around and can’t tell whose grief is real and who’s just putting on show in case the press is watching.”

Naturally, in the best Noir tradition there is much more to it than this morally intriguing conundrum for Charlie – as he tries to walk a path around Valeria’s death, trying to keep his increasingly drunken, angry friend Gil on the straight and narrow (and their writing arrangement secret) the seedy, shadowy world of Hollywood draws him deeper into moral turpitude, and his sense of self-loathing and broken innocence, shattered first by his experiences in the war (like so many damaged anti-heroes of Noir fiction) then degraded more by witnessing the sleaze behind the velvet curtain of the movie world, grows, and no amount of parties or drink can still it, and every days seems to simply add more sleaze, more problems, more things he hates himself for being a part of but unable to do anything about or to walk away from, while Valeria’s presence hovers over the story, a ghost with glamour in the way only those great 30s and 40s stars could pull off.

It will surprise no-one who has read Criminal or Fatale to learn that Brubaker and Phillips have fashioned a dark labyrinth peopled by lost, damaged souls, some just slightly damaged, some truly damned, dripping with Noir imagery leavened by that beautiful 40s Hollywood glamour (Phillips creating some truly gorgeous interpretations of the film magazines of the period to show the late Valeria in real period style, pose and lighting, very recognisable to anyone who loves their film history), that beautiful but utterly artificial dream the studios sell to the audiences.

As with Criminal and Fatale, the deeper into the story, the more the moral quagmire deepens, the more the characters become lost in their own late-night labyrinthine maze of the soul, and just like reading Chandler or Hammett we’re pulled in there with them, fascinated and disgusted in equal measure, while, despite the increasing complexity Brubaker maintains a tight, well-paced narrative, perfectly partnered with Phillips’ artwork, which draws heavily on the films of the period, re-creating that perfect Noir atmosphere, be it a late-night city street or a darkened office with feeble light struggling through the slats of the blinds. You feel you ought to be wearing a Fedora while reading it.

Beautifully crafted art by Phillips (with wonderfully moody colouring by Elizabeth Breitweiser) and sharp dialogue and perfectly honed Noir narrative by Brubaker, and that feeling that while one writes and one draws, this is real collaboration, the pair obviously operating on the same wavelength, and oh how it shows to such lovely effect in the finished tale. I could probably just have given you a much shorter review and recommendation: it’s Brubaker and Phillips – you want it.