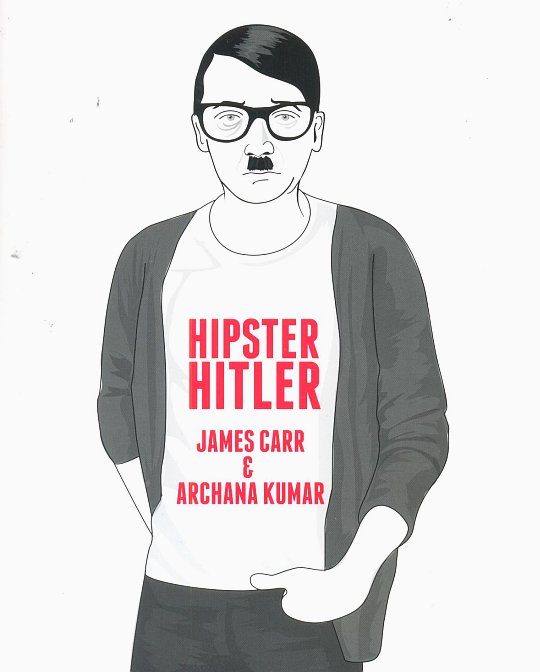 I’ve flagged up Carr and Kumar’s clever webcomic Hipster Hitler on here before; I first came across it online a couple of years back and then, as many of you will doubtless know, it appeared in the comics pages that the fine Stool Pigeon includes. Humour, of course, is a very subjective taste – when Richard covered the Stool Pigeon strips this was one that didn’t so much appeal for him, for instance, while I was consistently cracked up by it, so obviously I was pretty happy to get my hands on this collected print volume of the strips.

As you may infer from the title the main idea for this satirical take on the Nazi Fuhrer is conflating one of the 20th century’s most evil dictators with the poseur douche figure of the self-obsessed, style over substance (but pretending to be all substance) hipster figure. And while that does offer up a good comedy image, it’s not quite enough to sustain it by itself for strip after strip, and it’s to Carr and Kumar’s credit that they don’t rely on that idea exclusively; it forms the basis, the format for the series, but there are clever little tricks all the way through, most notably the very changing T-shirts Hitler sports throughout (often very funny if you know your history to get the references – one T proclaims “Triumph of the Chill”, another has “1941: a Race Odyssey”, “Weimar Guitar Gently Weeps”) and the little text introduction at the top of each strip, which manage to combine a bit of actual history with the comedy, one strip on his virulent anti-Semitism starting with the introduction noting how Hitler “blamed the Jews for Germany having lost World War I and further  accused them of degenerating the arts, trying to take over the world and causing the breakup of the Smiths.”

The collected edition is arranged chronologically, sampling the webcomic’s run in historical order, from Hitler’s early life, leaving his rural Austrian home (he is too poor to afford stylishly distressed clothing, he explains to his family) to try his luck in Vienna, before joining up in the German army for the First World War (this allows for some good lines about his changing his moustache style and a nice M*A*S*H* reference when he’s wounded and taken to a military hospital), the inter-war years, and then Hitler in power and the Second World War. The art is pretty simple and clear, rarely bothering with much in the way of background detail, but combined with some clever wordplay it’s pretty effective. 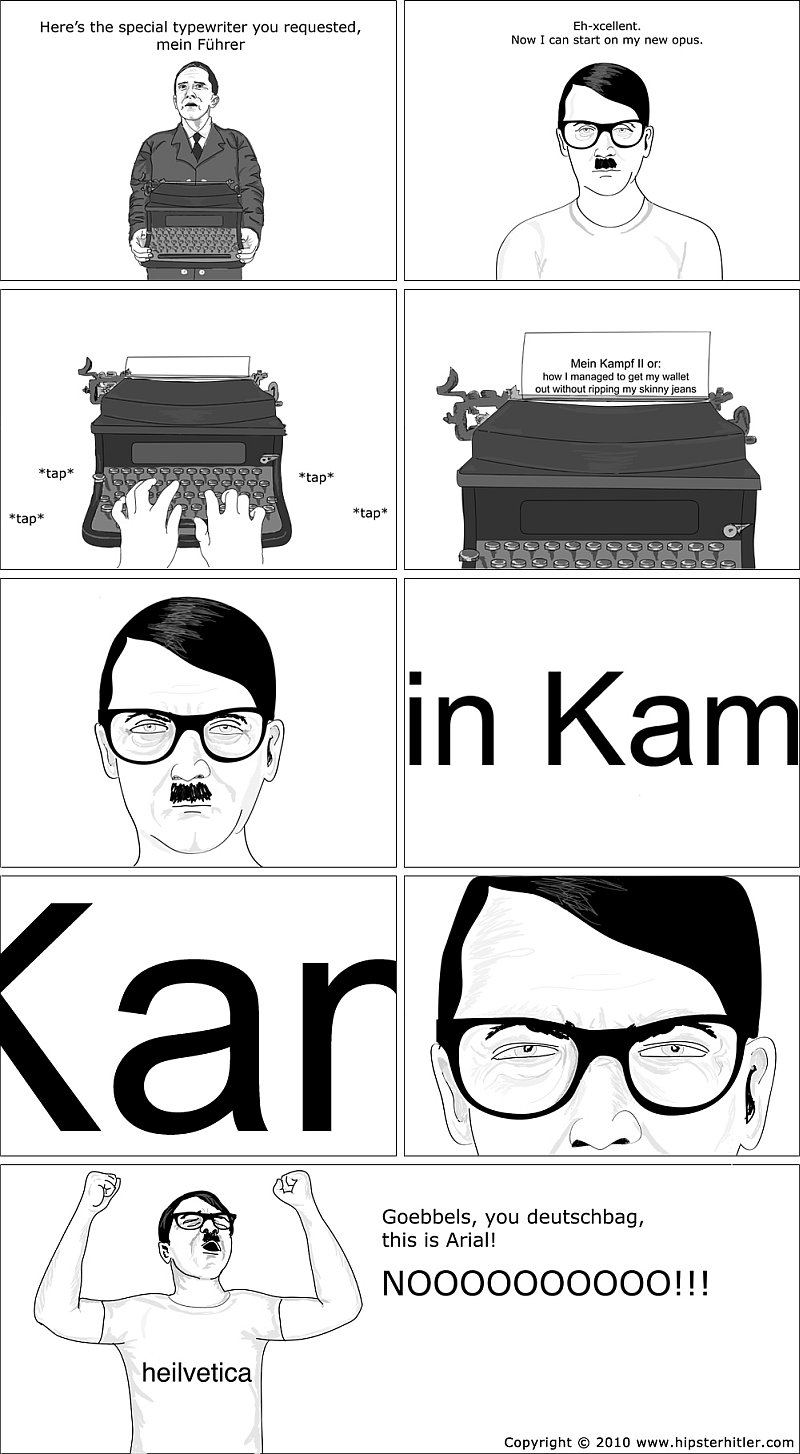 I found something to giggle about throughout all the sections, and more than a few that had me guffawing, and the duo make good use of the real, historical Hitler’s (and a number of other leading Nazis’) penchant for superstition (he consults a fortune reader and is horrified to find she predicts a later dictator who will come after him and who will appropriate his moustache – cue a good dig at barking Bob Mugabe) and his well documented eccentric behaviour (which none of those around him dared to question) in real life here is pastiched perfectly as being because of his hipster values and lifestyle (he tells Goering they will have air superiority for the planned invasion of Britain, but he means he will ground the Luftwaffe to reduce their carbon footprint and pollution, thus ensuring their air is ‘superior’, he likes the idea of a tripartite pact between him, Italy and Japan because it makes “a perfec triangle. Silly, but no sillier than some of the other beliefs of the real Nazi heirarchy). The rest of his rogues’ gallery of henchmen (and women – Leni Reifensthal and Eva get a look in too) are present – Goebbels, Goering, Himmler et al) and we also get a nice line in who’s the coolest dictator between Hipster Hitler and his one-time friend, a very party-on Stalin. 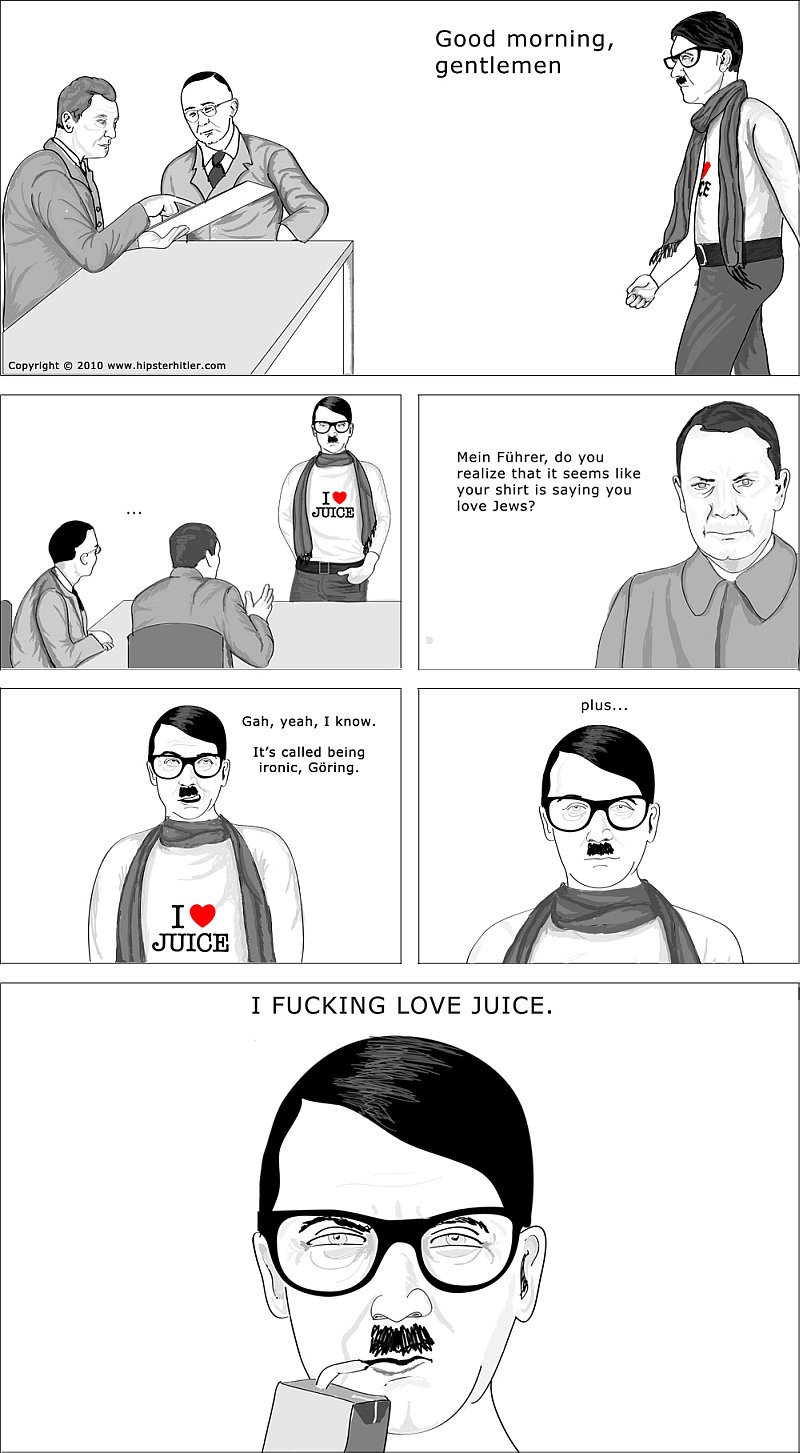 I’m sure some will object and claim this is bad taste, but I can’t agree with that at all. I probably came well primed to appreciate this – it’s a period of history I know well, and I was also geared to comedy lampooning of the characters and events of that period, as the late, great Spike Milligan’s war memoirs (beginning with the brilliantly titles Adolf Hitler: My Part In His Downfall), read way back in my teens, had me well prepared. Personally I don’t find this in bad taste, nor do I think it cheapens or lightens awful events and indeed hideous crimes against humanity, it does instead what good cartooning often does, takes the very serious and lampoons it mercilessly, along the way taking a vile real character and reducing them to utter ridicule, and that’s something satirists were doing actually during the war itself to bolster morale (and even before the war – consider Chaplain’s remarkable The Great Dictator) and afterwards – again think of British comedy genius Milligan (who noted in one volume of his war memoirs that he was convinced our sense of humour about it all was a major part of why we eventually won, it kept us going) or the great Mel Brooks who has delighted in any chance in his comedy career to ridicule the Third Reich. Hipster Hitler does what any good satire does, it takes some of the real aspects of the events and characters, then gleefully distorts them to ridiculous levels for comedy gold. And along the way it takes a vile, hideous dictator and mass murderer and through cartooning and comedy exposes the pathetic little man he actually was, inviting us all to laugh at him.