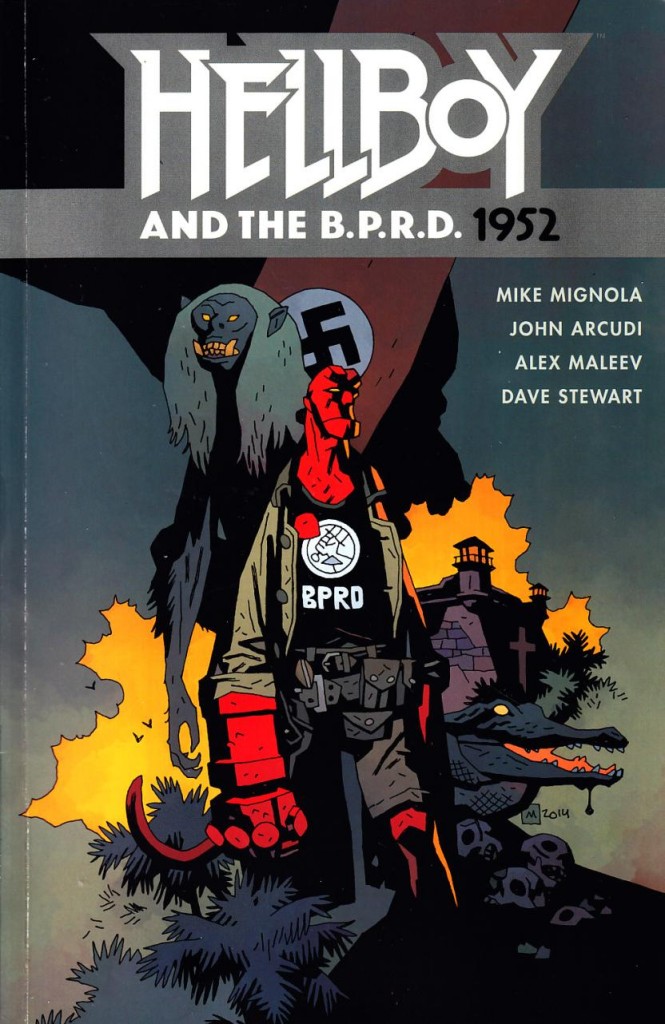 With Mignola’s most recent mini-series seeing Hellboy not only dead but now in Hell (a new arc starts this very month), Hellboy and the BPRD 1952 is a welcome diversion, taking us right back to his earliest days and his first field mission for the BPRD. We open in a hospital in newly-liberated France in 1946, where Professor Bruttenholm is recovering from injuries. He is visited by a charming young girl who the nurse assumes is his niece, but it’s soon clear that she’s something rather more than the little girl she appears to be. She brings the hospital-bound Bruttenholm news he has been waiting on regarding some of the supernatural experiments the Nazis had embarked on in the dying days of the war, desperate for some magical weapon to turn the Allied advance back. More specifically he wants to know all he can about how Hellboy was brought into the world and why.

Of course some of this is professional and academic curiosity – he needs to know as part of his role in this new Bureau for Paranormal Defence and Research, set up to counter such threats. But much of his line of questioning stems from something far more basic and far more emotional and human – a paternal instinct. The girl tells him about Project Ragnarok, about how the mad monk Rasputin still lives decades after his supposed death and how he summoned Hellboy, destined to grow up to wear the flaming crown as destroyer of all things, the ending of worlds. But, she chides the injured professor, you know this already, and yet you’ve adopted the boy, while others see the danger he poses, they argue for killing him, you treat him like a son… And that fatherly theme is a strong element here. Yes, Bruttenholm is no fool, he knows what Hellboy could be, he has nightmares about it. But like any good father he sees good in his son as well, and believes firmly that if he nurtures the good, brings him up with love and respect, that he can make him something else, something better – not the doom of the world but its hope. 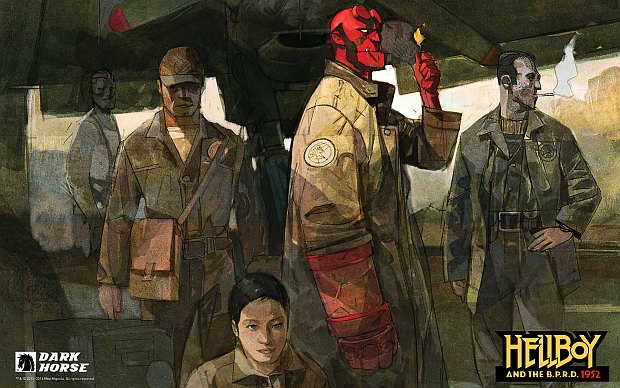 Cut to 1952, and Hellboy is now fully grown (his body matures quickly), and chafing at the restrictions of always living in the BPRD headquarters. The nascent BPRD is spreading its wings internationally, not just in the US, and a request for help investigating mystery deaths by a supernatural creatures in a village in Brazil elicits a response. As the professor briefs his team for their trip, he also adds that he wants them to take Hellboy. Some are unhappy – he isn’t qualified and the professor himself forbade untrained agents in the field after a previous tragedy. I know, he replies, but I made the rule so I can break it when I think it is right to do so. Some of the experienced agents worry about this, a couple, including Archie, the leader, think it a good idea for the boy to get experience in the field, one seems to object less about the lack of experience and more because Hellboy isn’t human. 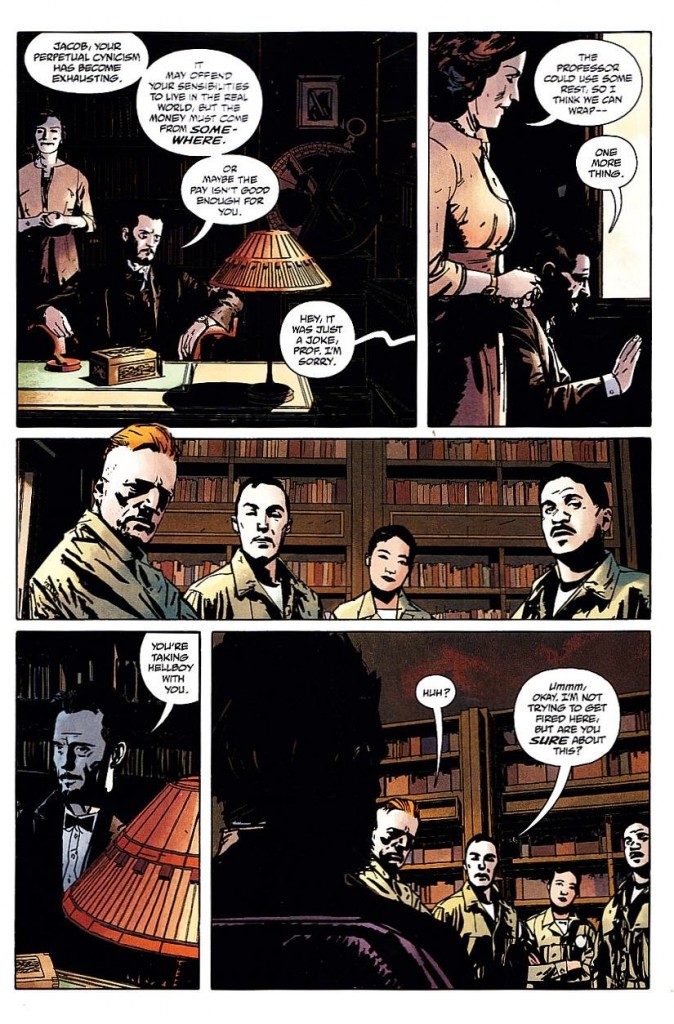 Prejudice rears its ugly head (and there’s more to this than simple bias, as we will find out later). But the professor has decided, and that is that. But there’s more than just letting Hellboy get some experience and letting him out of his confinement in the base here. After the team leave he turns to his assistant, not the head of the BPRD but a father trying to guide a son, feeling, knowing that he needs this experience, that he will instinctively try to fight the monsters, protect the innocent, and that fighting the good fight is what will make him the good man he believes he can be:

“Out there, Margaret, only out there can he become a man.”

The slow-burn of the opening takes its time establishing the mood and scene nicely, before the tempo moves up a notch as the team arrive in Brazil. It’s never an easy task to come to illustrating Hellboy after two decades of Mignola’s art, but here we have the excellent Alex Maleev, and he steps up to the plate – one of the first scenes in Brazil is a nice, simple but utterly lovely character piece, Maleev showing Hellboy smiling, happy simply to be out of his usual home in the base, he’s outside, in the world, smelling the trees as they drive down a road in Brazil and this simple pleasure has him grinning. It’s soon business though, as they learn of the deaths and disappearances around a small village, which in best Gothic tradition, is located near a semi-ruined old castle with an evil reputation. Once it has ceased being a fortress it became a prison, but after mass deaths there it was abandoned. Now a rather creepy film crew has set up there, and you just know there’s going to be a connection between them and the mystery creatures – the question is what is that connection, what are they really up to and will the team figure it out in time, especially when playing nursemaid to a rookie Hellboy? 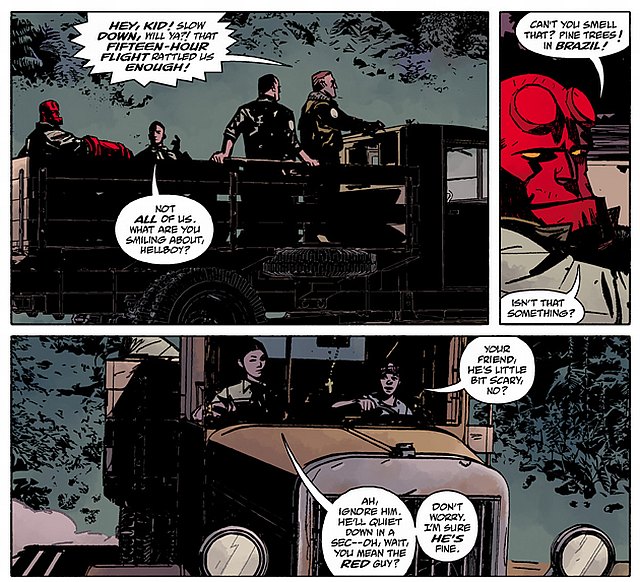 I’m not going to spoil it too much for you by going into what they find, but suffice to say of course the locals are right, it’s not simple superstition, there is indeed a monster (perhaps more than one) and a young, inexperienced Hellboy will have to decide how he deals with them. Naturally there are dark goings-on in the semi-abandoned castle, and it will not surprise you – especially given the cover art clearly shows a nazi swastika flag – that it involves some of the “boys from Brazil”: escaped Nazi war criminals (and HB is always wonderful when it involves monsters and mad Nazis!).

The story manages the fine trick of being it’s own tale, a coming of age story in some ways, of a young Hellboy, but it also manages to combine that with multiple references to Hellboy history we’ve seen over the years, weaving them into this early story, some as nods to previous stories, some actually expanding a bit on elements of HB history we’ve seen hinted at before. It’s all very, very satisfying for the long-time reader (although a new reader can still enjoy this as an origin tale and they will pick up some elements of HB history along the way which will work nicely if they follow it up with reading previous volumes). 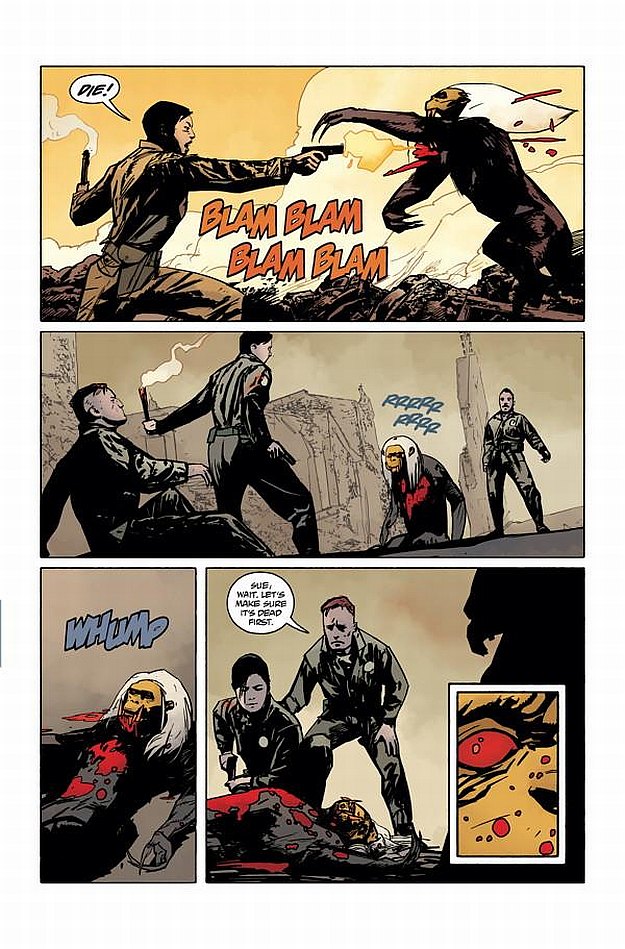 The nods to Hellboy history also includes his first encounter with a memorable villain we’ve seen several times now in Hellboy volumes – I won’t blow the surprise, but will say I was delighted when I saw who it was and I think many of you will be too. Maleev, as I noted earlier, does sterling duty, making the art his own while working within a style that doesn’t jar with Mignola’s oh-so-iconic art for HB, aided in no small manner by the excellent Dave Stewart and his atmospheric colour palette (an element always important in HB’s visuals) – a fight in a local church lit by candles is all washes of sickly orange and bright red, night scenes in blues and purples (including a memorable image of a priest by a standing cross, looking up to see one of the monsters perched on the cross-beam, silhouetted against the dusk sky).

It’s a terrific romp, it offers more connections to other parts of Hellboy’s established history and, frankly, it’s just huge fun to see such a young Hellboy on his first outing (and how the world reacts to him too – after all, unlike later volumes where HB is well-known, here most people will have no idea who he is and never have seen anything like him). But beneath the action-adventure romping fun there’s that father-son story, which lends it a deeper emotional core and also gives that Hellboy history a more personal note. This isn’t just the story of how Hellboy went from being Rasputin’s tool for the apocalypse to being the noble hero, it’s the personal, emotional, family level of it that really works so well here, an adopted father who knows the responsibility he bears to bring this boy up the right way. Any father worries about such matters, about making sure they instil in their child not just love but respect for others, the instinct to do the correct thing, and while most dads don’t have to worry about their child growing up to be the beast of the apocalypse, on an emotional level it’s the same struggle, the same hopes and fears of a father for his boy.