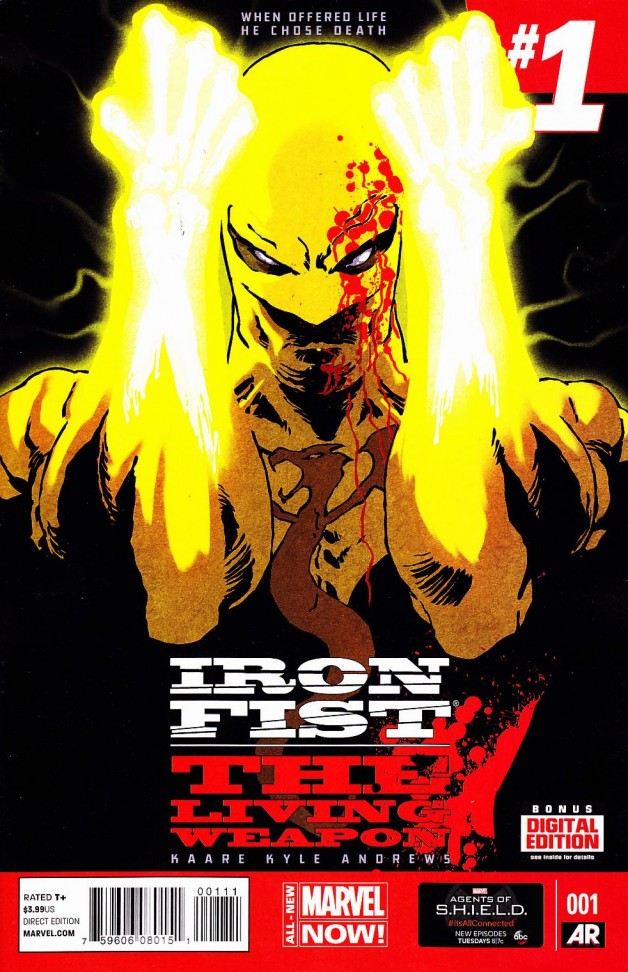 Alright, confession time – I’ve never read a lot of Iron Fist before, so I come to this first issues of the Marvel Now! take on the hyper kung-fu martial art warrior relatively fresh. A colleague recommended it to me and well, since this is a first issue of a new take on the series it does seem like a good time for those relatively unfamiliar with the character to have a peek. And actually I’m pretty impressed.

Kaare Andews has a somewhat unusual opening for a mainstream comic issue, the very first page being pretty much just a head and shoulders shot of Danny, the current Iron Fist, very long series of speech bubbles down the left margin (we soon find out he is being interviewed by a very smitten and flirty journalist) and series of dialogue boxes counterpointing the speech bubble conversation over on the right. One large image and an awful lot of text – not the usual way top open a brand new action series. Ballsy, different and quite interesting, I thought.

There is one smaller element to that main head and shoulders shot, almost easy to overlook actually given the small size and the amount of text distracting the reader’s focus – a small image overlaid on one shoulder of Danny, explorers by the look of them, in parkas tramping through snowy mountains. The following pages follow into that flashback presaged by this tiny, subtle hint on that first page, Danny as a boy, with his mother, father and family friend trekking through storms in the remote mountains, his father so obsessed with his quest he is risking his family. 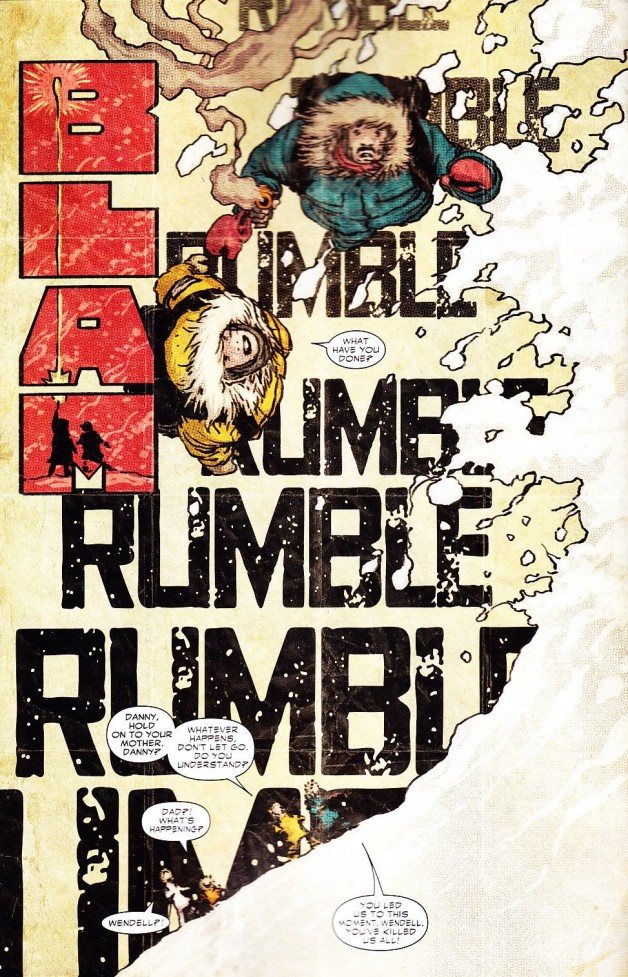 There are some fantastic scenes and layouts here, from a one page splash that combines fairly minimal art juxtaposed with big, stark, bold sound effects lettering to denote the start of an avalanche – quite excellent use of art and graphics, more effective than a series of smaller panels depicting the characters being caught up in the moving wall of snow would be, followed by several landscape format panels on the next page, each one becoming slimmer than the last, the black spaces between wider, giving a seriously good impression of being caught in the flow of that avalanche, the noise, sudden movement then white out followed by black out…

Back to the present and Danny musing on his father and his obsession, as well as his business empire, He eats and drinks mechanically, even has sex with the flirty journalist, but again the same lack of emotion on the face, everything is the same to him, he is going through the motions. Outside his apartment window the ruined tower of his father’s former corporate headquarters juts up into the sky, still standing but huge portions gone, mangled, standing in silhouette against a blood red sky like some Freudian symbol of father-son power dynamics.

Of course this is Iron Fist, so we have to have some action, and wouldn’t you know it, helicopters deliver teams of ninjas sliding down their ropes to attack sneakily, but it’s rather hard to sneak up on Danny. And he really hates ninjas…  Again Andrews uses some pretty interesting layouts for the dynamic, unusual looking fight sequence, and the troubled Danny forgets his brooding over his life, his father, his company – a big battle against multiple opponents focuses his mind: “this is just what I needed.” This line is delivered from an uplit, menacing looking facial shot of Danny which reminds me very much of Miller’s The Dark Knight where it clearly acknowledged the dark part of the Batman that liked dealing out violence to wrongdoers, even needed to do it. 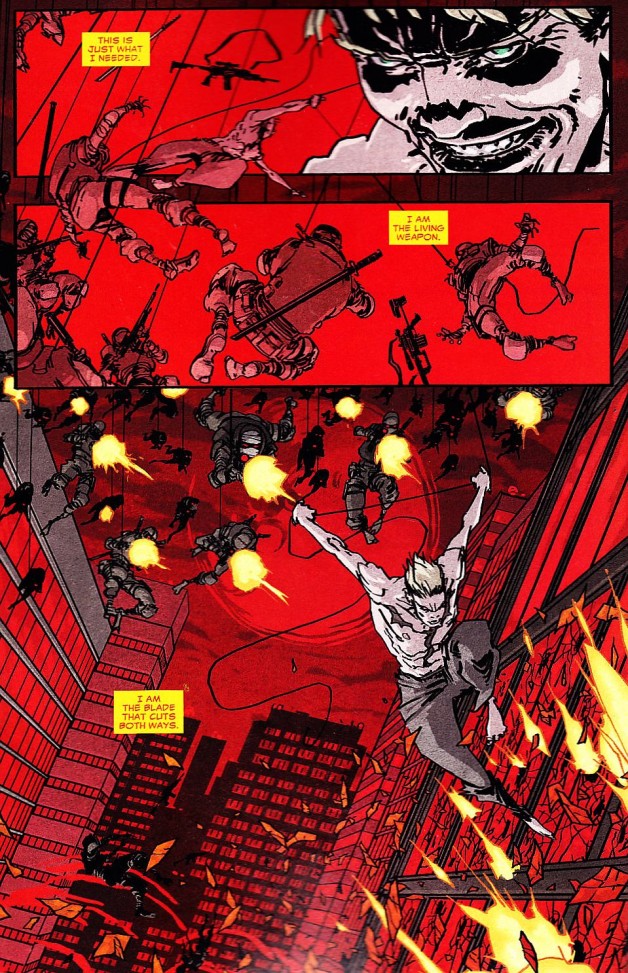 As for the question of why the attack team was sent to ambush him and what is going on back at K’um Lun, those I’ll leave you to discover for yourselves – don’t want to spoil the whole issue now, do we?

I have to say I was very impressed with this, even coming to it with no great knowledge of the character or indeed particular love or interest in it previously, but for a first issue of a relaunch it worked perfectly for someone with that background – I didn’t need to know anything else, this was self-contained (I’m sure old hands will spot references I didn’t, but it all still worked for me). And as I already said there are some fantastic, innovative layouts here, some great use of space, different panels and the like, some of the most interesting I have seen since JH Williams III’s brilliant work on Batwoman, and some wonderfully moody use of colour schemes and shadow. Intriguing first issue plus creative use of art and layout, someone clearly wanting to push and play with how you tell a story in a comic issue, what’s not to love here?