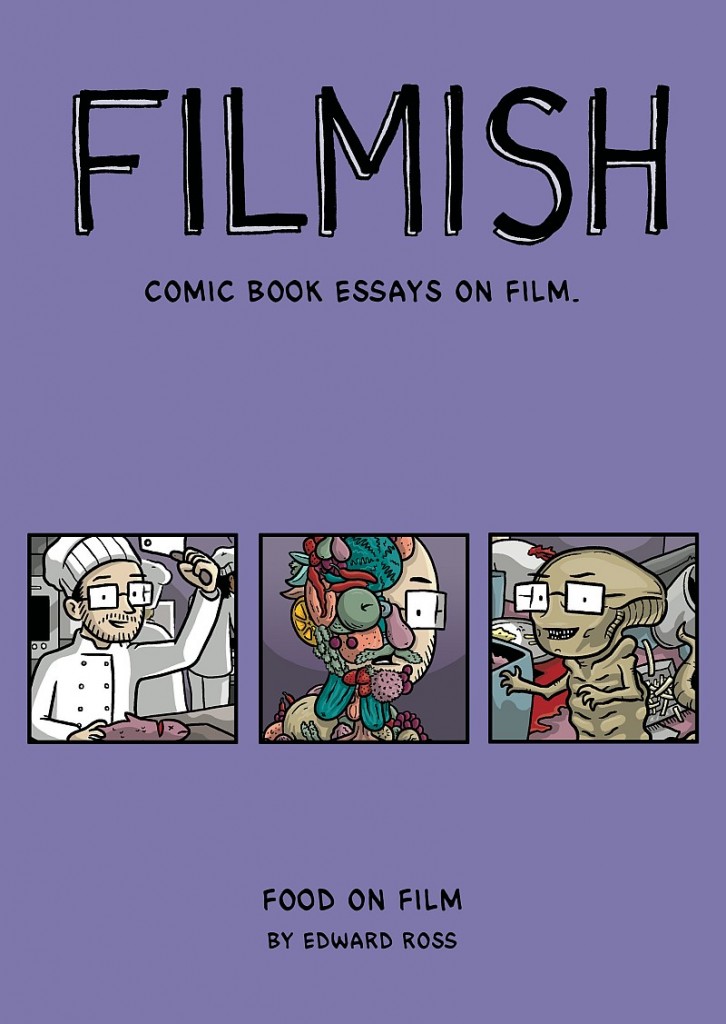 As regular readers will know, I’m a bit of a cinephile and as such it’s no surprise that I’ve really enjoyed the previous entries in Edward Ross’ Filmish series, examining the world of cinema and film theory through comics, essentially taking one modern, mass, primarily visual artform which came into prominence in the 20th century and looking at it through the medium of another. In many ways the media of cinema and comics have grown up together across the last century and a bit, and both have intercrossed with one another numerous times across the decades, from comic characters like Flash Gordon and Buck Rogers inspiring cult, pulp serial films or celebrated early comics superstar Winsor McCay experimenting with film animation through to the modern era and massive film properties drawn (no pun intended) from comics, or a filmic visual sensibility influencing comic artists (as seen to such great effect in Dave Gibbons’ art for Watchmen, for instance), so it seems quite appropriate to me that Ed should use comics as a handy, very accessible portal into the world of film studies. 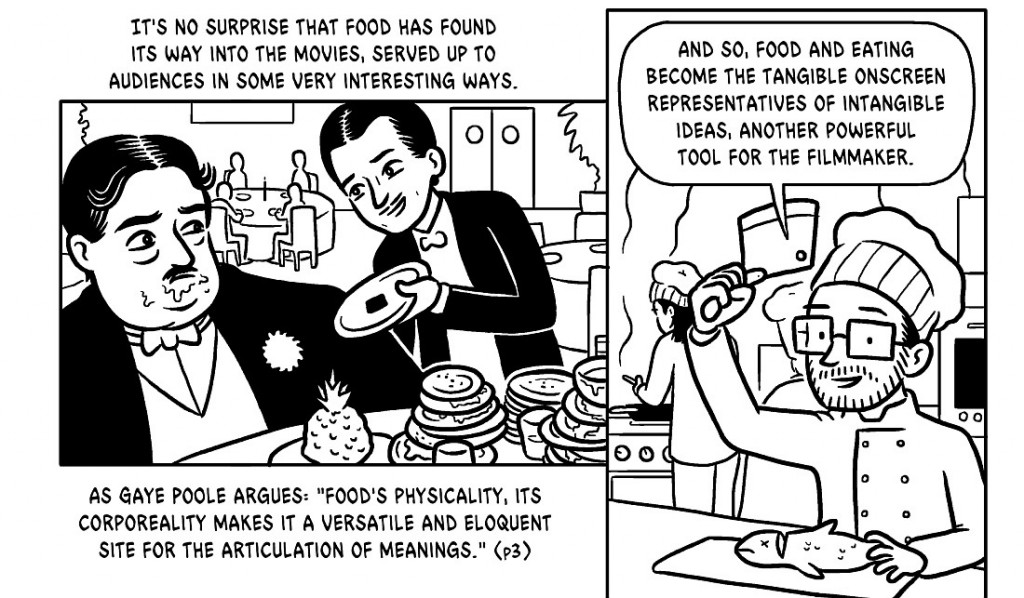 In previous editions Edward has looked more generally at film theory (issue #1, reviewed here), set designs and architecture (issue #2, reviewed here) and technology and technophobia (issue #3, reviewed here). Edward has been pretty busy since the third Filmish so there’s been a bit of a gap that one and this new fourth, in which the theme is “food on film”. It’s an interesting topic to explore and, despite the fact we can all probably conjure to mind several good examples of the use of food and dining in film, it’s one most of us, even those who spend too much time thinking about cinema, won’t generally spend a lot of time considering. But as Edward points out in the opening pages, food is one of the great universals of the human condition – we all have to eat, quite simply, or we cannot live. But food in human culture is often about far more than simple sustenance, food, the preparation for it, the type of food on offer, the location consumed, who is providing it, all come laden with cultural and social meaning, from the simple and wonderful delight of the family meal, cooked with love for those who will share the meal, the unspoken satisfaction of the familial bonding around the dinner table, the ritual pleasure of it, through to the hideously expensive restaurant where one has to book months in advance simply to enter and where dining is more about being seen in a particular setting by others than enjoying food. 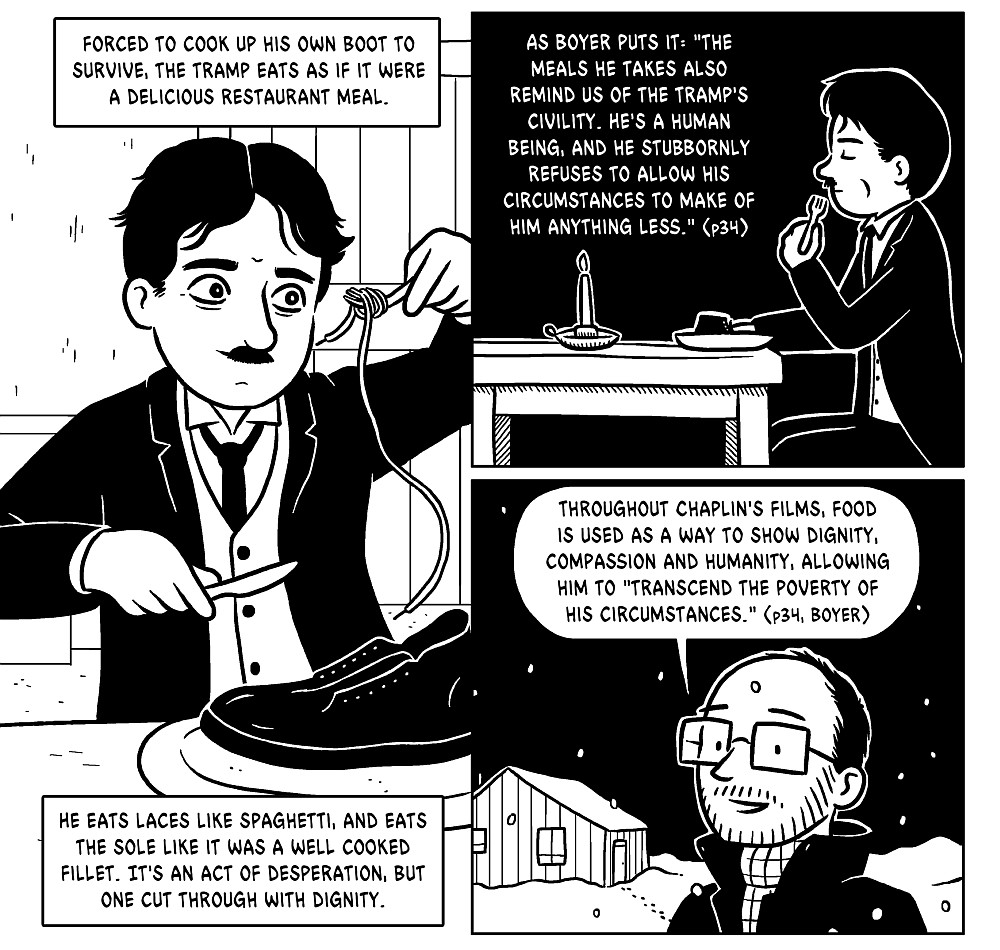 Here Edward explores these and other food-related topics from decades of cinema. Unsurprisingly one of early cinema’s iconic scenes, the great Charlie Chaplin, starving, cooking and eating his own shoe during the Depression in The Gold Rush. As Ed shows, this is a comedy moment, Chaplin prepares his shoe like a gourmet meal and dines as if in a fine restaurant, despite the nature of his dish. But as he also shows this is about more than comedy, it’s Chaplin, never one to shy away from working in social commentary, making it clear that despite being wretchedly poor and hungry, his Little Tramp is still a civilised man, not a feral animal, still with some dignity, attempted to hold on to a little piece of civilised culture as he carves into his own boot by candlelight. It’s Chaplin declaring even the poorest in a time of hardship are still people, and in our current economic climate with growing reliance on charity food banks, it’s a memorable scene which still has social relevance to today, in addition to its comedic qualities.

Anyone with more than a passing interest will doubtless anticipate some of the films which will make an appearance here – quite understandably Greenaway’s The Coof, the Thief, His Wife and Her Lover commands a section of the comic. Given how food, it’s consumption and its social setting is a large part of the film it’s a good choice, and Ed uses it to demonstrate how film can use the consumption of food – something we are all familiar with, of course – to symbolise other qualities, such as the way the gangster Albert uses his expensive restaurant to demonstrate his power and patronage, but also as a transgressive power, in the way those who displease him are forced to consume non-food item in front of others, both humiliating them while making clear his alpha-male status (this will, of course, be turned on him in a rather macabre yet darkly amusing and appropriate manner towards the end). 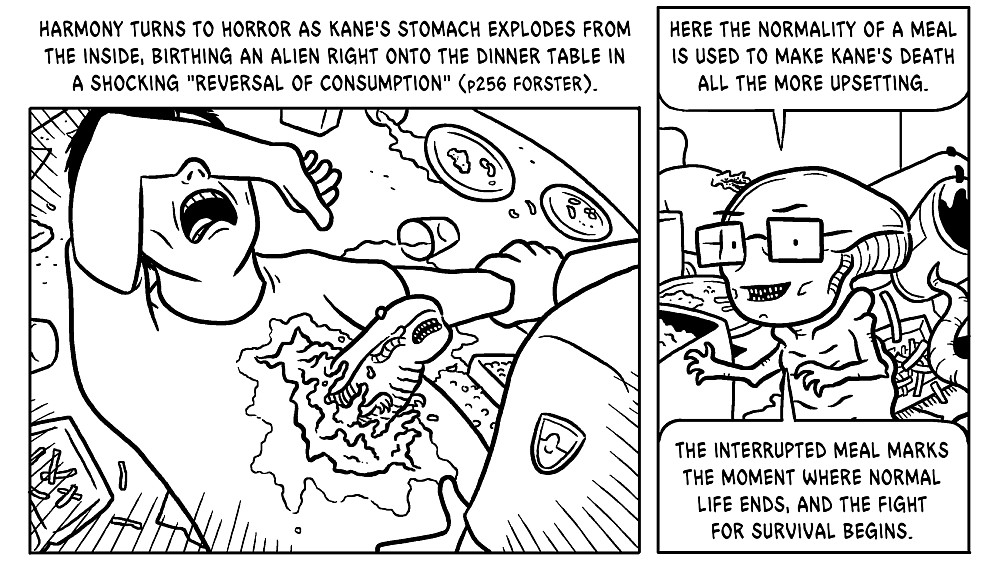 Horror, often a huge favourite with film studies academics, of course makes an appearance, from the use of a very everyday dining experience on a working ship in Ridley Scott’s Alien to give a sense of normality to the viewers, that even although this is the far future, in deep space, people are still people, sitting around the table, gossiping, bitching, laughing, eating, drinking. And then of course having established that normality a later dining experience is used to shatter that seeming normality in one of modern cinema’s most iconic scenes as the alien creature erupts through John Hurt’s stomach right on the dining table. It’s a sequence often discussed more in terms of gender (a form of male rape crossed with a violent, horrible inversion of birth as new life erupts from the man’s violated body), but here it is viewed again in terms of food and consumption – “a reversal of consumption” as one panel has it. The Alien films were a regular feature in film studies when I was at college, but as I said generally more about power and gender terms in the analysis, so although I was very familiar with both the film and academic theories on it I hadn’t really considered it from the food perspective before and it’s always interesting to be reading about something you know very well and suddenly finding a different angle on it to make you think about it again.

While I was very familiar with many of the films here Edward also brings in all sorts of other examples from various languages and film cultures, some of which I know only by reputation, such as Tampopo, “which paints a picture of a Japan obsessed with food”, or Bunuel’s Phantom of Liberty (in which bodily functions and social interaction are inversed – the ‘civilised’ classes eating in private but defecating in public, or Hungarian film Taxidermia which uses food and consumption to chart three stages of recent history for that country, from fascism through communism to capitalism. Obviously anyone reading this will think of some of their own film viewing and wish they too had been included, but that’s always the nature of these things and besides there needs to be a strict, disciplined control on the number and type of examples – after all Ed is using them to illustrate some points about the symbolism and nature of food, not as an illustrated A-Z of food scenes in film history! Just as you have to pick specific examples and back them up with references when writing an academic essay the same has to be done in this kind of comic work, and it is something Ed again proves he is very good at, in fact in many ways I think it’s fair to consider the Filmish series as film studies essays in comics form. On stage at the Edinburgh International Book Festival last month with Will Morris, Edward commented that he has mostly been learning how to create comics through the tried and tested method of making them. I think that shows when I glance back at my earlier copies of Filmish – which is not to say I thought there was anything wrong with the first ones, far from it, in fact I gave them good reviews and commended to them. But looking back to the first one (which I read in 2010 after picking it up in the Filmhouse in Edinburgh) and then to this new issue I can clearly see Ed’s artwork and layout becoming more proficient; the artwork is sharper and has a much clearer line to it, while I think he’s become much more experienced and confident in laying out the panels to convey the message he wants to get across, which is good to see, while he has retained elements which have worked well from the very earliest outings, such as dropping his own cartoon alter ego in from time to time as a guide and commentator. As with previous issues Edward includes both a filmography and a bibliography so that the curious reader can follow up any areas the find themselves wanting to explore further, and I imagine that many, like me, will find themselves with a desire after reading to go and find some of the films mentioned here again, some old friends to re-watch to consider again in a different light, some that we came across in this volume which are new to us and that we now have to find and watch, and that to me is always a mark of good reading, when it leaves you wanting to go and explore other artforms.