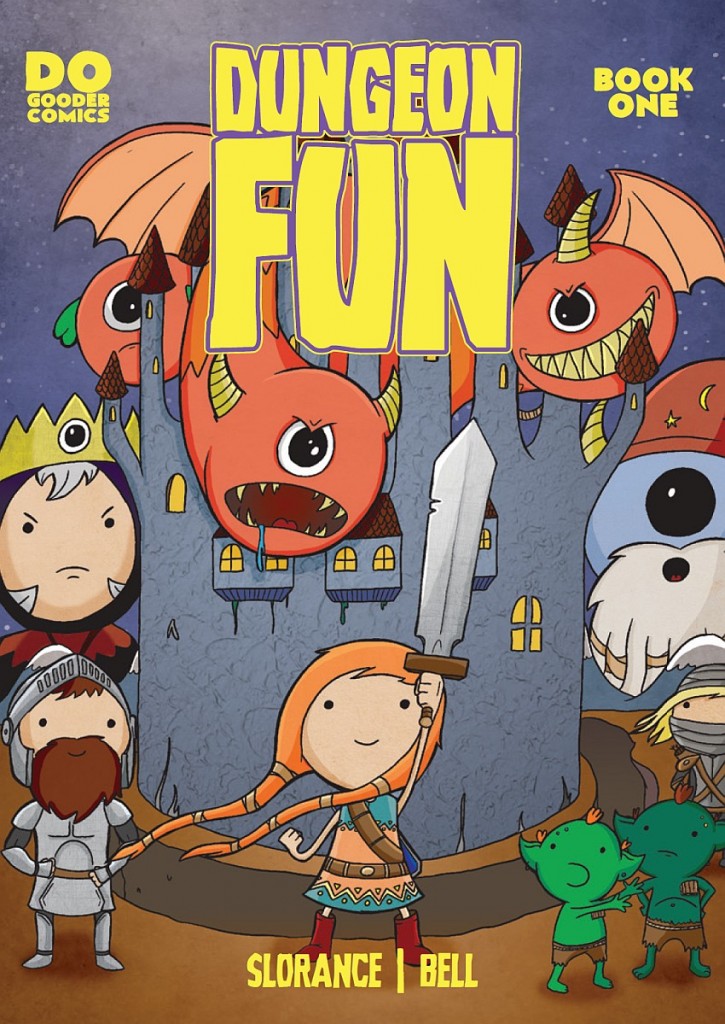 “This is the story of a girl and her sword.”

We open on a pretty standard scene for Dungeons and Dragons influenced fantasy – a lovely, big splash page of a large, multi-turreted castle, surrounded by an incredibly deep moat and a single bridge spanning the gap. Before it stands a proud knight errant, ready for the quest. There are Great Deeds to be Done, Monsters to be Vanquished, Princesses (presumably lovely, of course) to be Rescued! Our shining knight presents himself, a great speech prepared to announce his virtue and bravery… And that’s right when Colin and Neil, with what I suspect was great delight, pull the rug out on the generic tropes of fantasy tales. For starters out poor knight is cut off in the middle of his impressive announcement speech by a rather irate bridge troll, who is less than happy to be addressed as “bridge troll”, pointing out he does, in fact, have a name (and a nametag). Going through a pretend ‘metal detector’ he is asked if he has anything metallic on him – well, er, armour, sword… Sorry, have to leave those behind, bridge security! 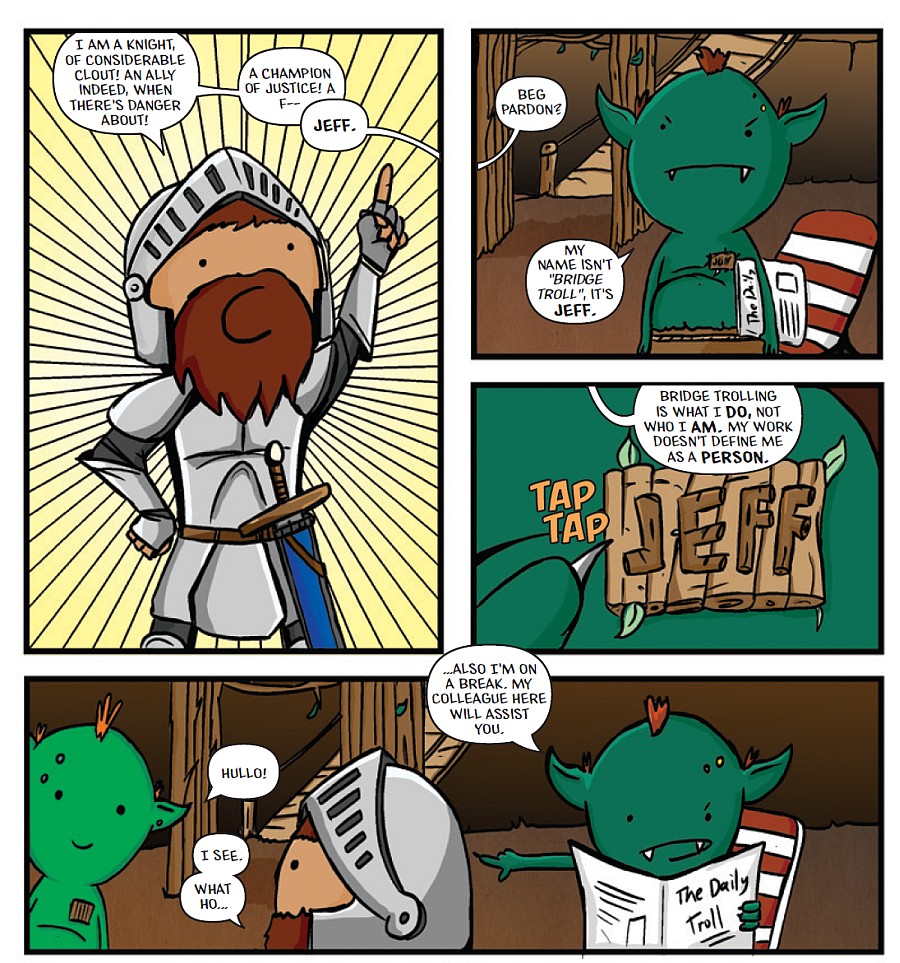 And this farcical encounter soon directs us to the world of Deepmoat – yes, there is an entire village living down in the very deep and muddy moat which circles around the castle. And those pesky bridge trolls, messy pups that they are, have a dirty habit of throwing anything and everything down there, sometimes right on top of the unfortunate inhabitants. Our knight’s sword among them…

And that takes us into the world of Deepmoat where we find not just objects but even people get chucked in the pit by the trolls above, including a very young girl. Fortunately for her she is adopted by a nice couple of creatures who live in Deepmoat and they raise her as their own, Fun Mudlifter. But when more falling junk from the trolls kills them Fun decides it is time things changed and that the trolls above were taught a lesson. Of course she isn’t sure how to do this, or even how to get up there, but needless to say in this kind of genre it will involve a lot of adventuring, dungeons, monsters, trials and more. 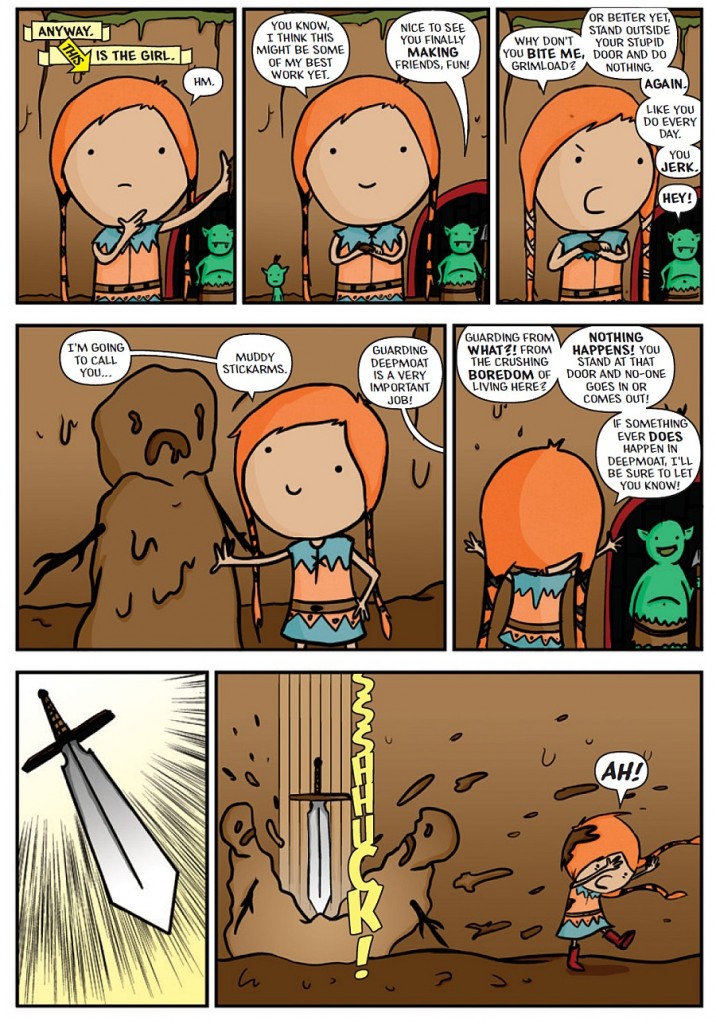 I’ve got to confess I absolutely loved this; in fact I sat with the largest grin on my face throughout, laughing repeatedly. Colin and Neil have taken all sorts of elements and references from the fantasy genre, from games like Zelda to well-worn tropes familiar to any of us who have sat up to 4am battling through Dungeons and Dragons or Tunnels and Trolls. And they they have clearly had a lot of fun taking many of those generic elements and playing with them and twisting them around. There is a good adventure story here, but it is also a delightful romp served up with lashings of wickedly funny humour. And it looks fantastic too.

Regular readers will know I loved Neil’s previous solo, semi biographical works (reviewed here) and while I can see some of his other art style in the characters here it is much lighter and with the fantasy rather than real-world setting he can indulge himself in flights of fancy (although still with a lovely cartoony style). And there are lovely touches – the lettering, too often an afterthought for some creators, is cleverly done in many places, using different sized speech bubbles appended to main ones and changes in font sizes to denote changes in volume and pitch of speech, and these are matched nicely with the expressions drawn on the character’s faces as they speak, the elements all work together beautifully. There are other nice touches like the simple device of inserting an arrow into an early dialogue box then again to a much later one to help tie different events together and show how connected they actually are.

It’s an absolutely wonderful read, inventive, funny, warm, charming and so funny I am still smiling just at the thought of it. Dungeons, moats, monsters, wicked queens, castle, knights, quests, brave girl on a mission, prophecies, I mean really, it has it all. And Sandwiches. Can’t wait to see the next book. Meantime go give Colin and Neil some money for this, you will love it.