Filmish : A Graphic Journey Through Film, 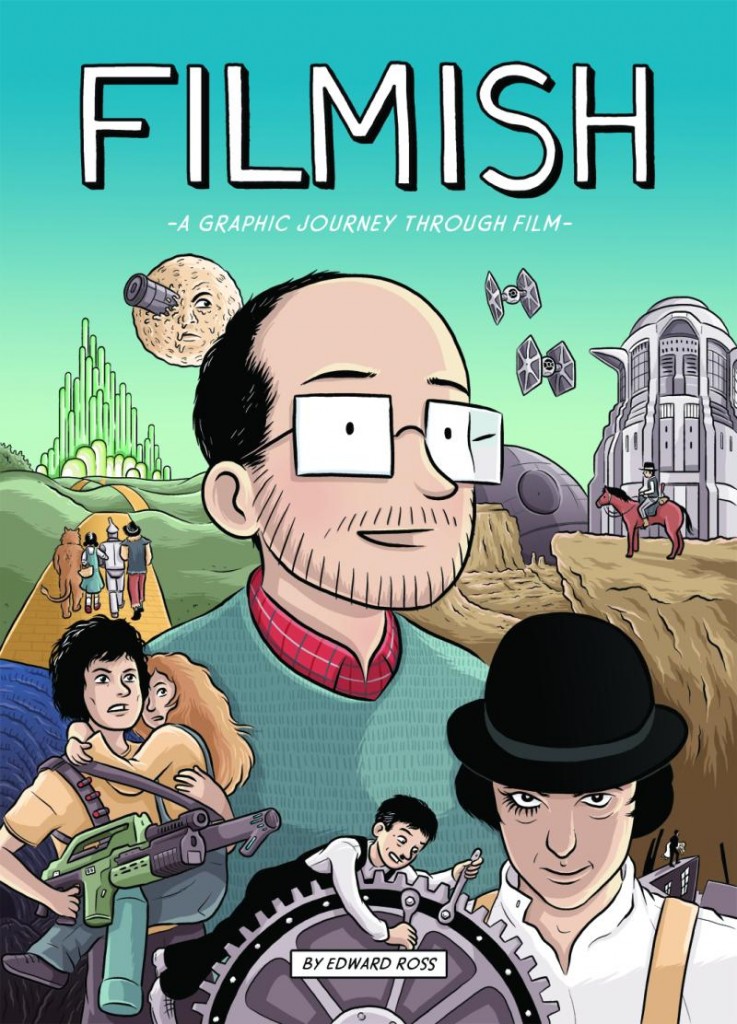 Cinema. Comics. Two media which have, essentially grown up together through the 20th century, both still evolving today. And both have been intertwined for the best part of a century; today comics characters dominate the top end of the mega box office with films like The Avengers, while the vibrant Indy comics scene feeds into the equally vibrant Indy movie scene (think the wonderful Crumb biopic or Ghost World). It’s not a new relationship – in the earliest days as both comics and film were finding their way as mass media, still inventing what they could do, early comics genius Winsor McCay was dabbling in some of the first animated films. By the 30s and 40s Hollywood would already be mining comics for ideas: Flash Gordon, Batman, Dick Tracey. Cinema and comics have evolved a lot over the last century and a bit, and I find it deeply satisfying that one strongly visual medium, comics, is here being used to discuss another visually rich medium, film.

I first encountered Edward Ross and his Filmish series as a wee A5 self-published mini comic in the Edinburgh Filmhouse, and I loved it straight away. Each issue over the next few years would pick a theme to explore, using clever visuals and some very well-done research to explore various ideas and theories about cinema, some technical, some artistic, some ideological and sociological, taking in a wide variety of topics, from the power of the image and how much we can trust it (or manipulate it for effect) to the technology (both the tech used to make film and also the movie stories often explore our relationship with technology) to sociological and psychological implications, such as social hegemony, celebrating or vilifying the Outsider, the representations of class, gender, religion, race, and, something cinema is remarkable at, discussing what John Berger called our “ways of seeing”. 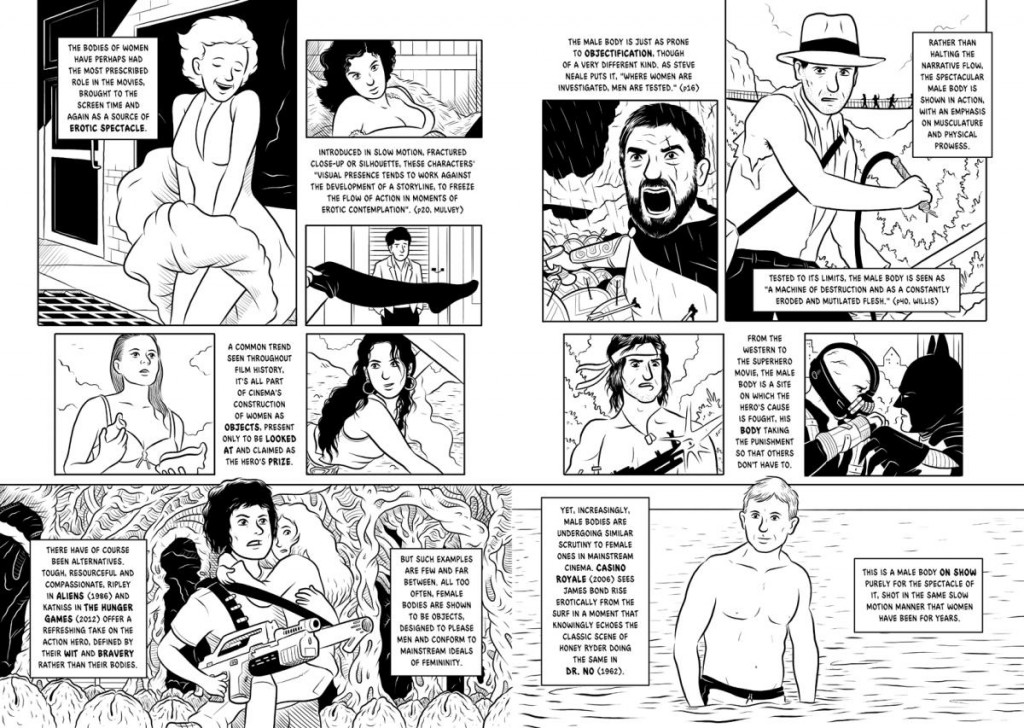 Appropriately enough the first themed chapter is The Eye, looking at not just the human eye, but that wonderful mechanical (now digital) eye invented by human ingenuity: the camera. We’re surrounded by visual imagery today; pretty much anyone can shoot a video clip on their phone and upload it within minutes to share online. But in the first few pages here Ed capture brilliantly the sheer magic of early cinema and the astonishing notion of being able to see moving pictures. Think about it for a moment; through all the long millennia of human civilisations we’ve had art – from cave paintings 30, 000 years ago to the seemingly eternal carvings of the Egyptians to the glories of the Renaissance. And yet in all those thousands of years it was only in the closing years of the 19th century that human beings could see the world around them – animals, the sea, trains, other people – in moving images, recorded for posterity, images they could return to and re-watch. How astounding must that have been to those first audiences? Even today there is a magic in this, from that moment when the house darkens and the first images start to appear on a cinema screen, the feeling of going on a journey, or the simple pleasure of home movies, from the old 8MM to modern hi-def videos, moments of time preserved, which we can go back to again and again. Decades on we can go back and see loved ones long gone, but on film they are still moving, walking, smiling, living. Magic.

But there is much more to the act of seeing than just observing, and Ed touches on this topic numerous times, not just in the chapter on The Eye but in later chapters – there is how we see, and how the camera sees. How early on there was more trust, the adage of the “camera never lies”, a naïve assumption of course, every image ever shot will contain some deliberate elements from the photographer. Sometimes it is as simple as what they chose to show in the frame and what they omitted. At other times, as Ed discusses in later chapters on Power and Ideology, it is more sinister, more thought-out, a planned use of imagery, edits, cross-cuts and other techniques carefully used to create a specific message, be it blatant propaganda films beloved by Goebbels or the more insidious messages which many mainstream movies carry, some in an obvious, heavy-handed way (think of the ‘anti-red’ messages blatant in some McCarthy era movies in the US) or mainstream movies which celebrate military achievements and actively collaborate with the armed forces to make the film (giving the authorities direct influence over the making of the film and its message), or more subtle messages, such as supposed societal norms being reinforced (marriage, family, heterosexuality, gender roles) and how some films transgress these notions, often to powerful effect. 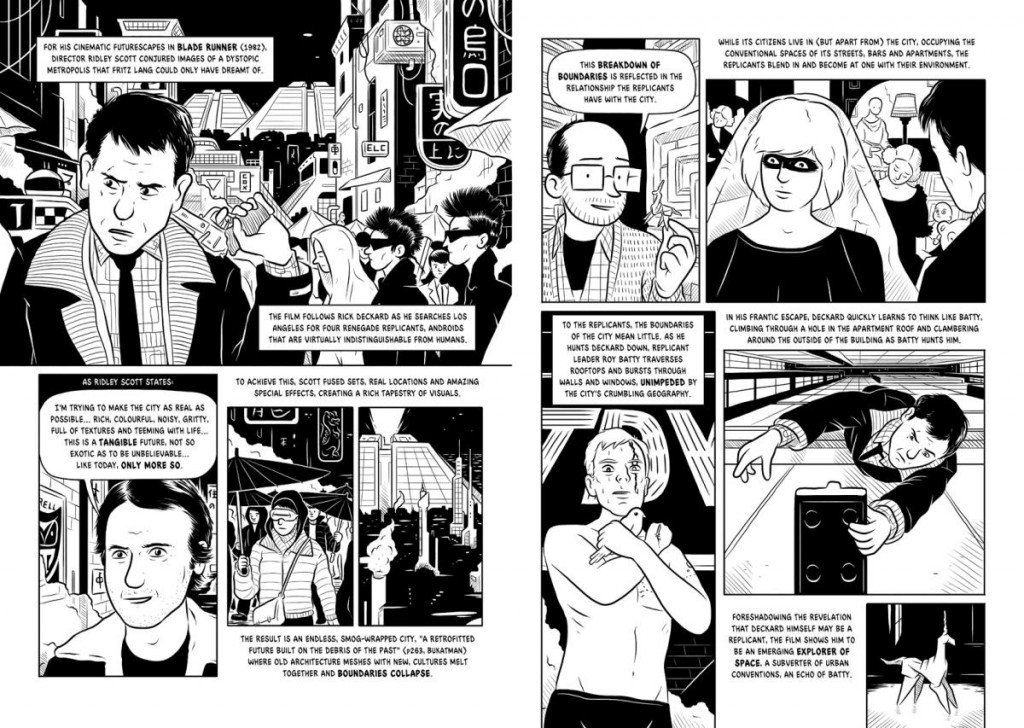 Time and space are essential qualities in cinema – the imagery can show us an endless variety of spaces, from galaxies far away to the sweeping, iconic landscapes of a John Ford Western, while also recording specific moments, thoughts and actions in time, held forever in the camera’s eye. And of course cinema can manipulate those aspects of reality in a way we poor humans cannot – we’re forever stuck in a linear timeline, able to look in one direction at a time. The film can show us multiple viewpoints, long panoramas or intimate close-ups and do so rapidly, or even merge scenes in a way the human eye cannot. And it can play with time; early film genius Georges Melies discovering the edit through a glitch, a camera jam, a technique now everyday but a century ago revolutionary. You could pause the camera, cut to other scenes, use it for effects (like making a person seemingly disappear), you could have slow-motion, you could reverse the flow of images, you could show events happening at the same time or different times within a few moments of filmic sequence, powers of time and space manipulation we don’t have in the real world but which film frees us to explore.

These are not just cinematic and storytelling techniques, they also suggest to the human eye and mind different notions about how we perceive the world around us and why we do – as if the invention of the film camera had added an extra sensory layer to those given to our bodies by natural selection. And that is another strength of Filmish – Ed doesn’t just examine some aspects of film-making and how we view cinema, he goes into how these processes have affected our thinking. Filmish is replete with references and quotes to numerous academic theorists throughout. This is a book which celebrates movies but also questions the medium and it offers up some of the academic tools to help with that process of thinking and questioning not just what we se,e but why we see it, why the film-makers decided to show something in a specific manner and more, to develop that critical faculty while still retaining a simple love for the moving image as well, and in this I think Filmish succeeds spectacularly.

Having read many of the same theorists cited here back in my college days I can say I am impressed not just with the depth of research Ed has put in here, but how wonderfully accessible he makes it using the comics medium, and the book comes complete with an extensive bibliography and filmography for those wishing to explore some of those topics further. And given we live in such a media-rich environment, a media which is hugely influential, it is no bad thing to have more of us thinking critically about what that media is being used for and how it is made and consumed. And the filmography will leave you with a list of movies you really want to seek out, or perhaps old favourites you will feel compelled to revisit again. And this time perhaps you will look at those films a little differently.

But I don’t want to give the impression this is all about academic theorists in comics form, stroking their chins and talking about the intertextual nature of the postmodern image (yes, I have had lecturers use sentences like that). While Ed presents the film studies side of things very well and accessibly, he never lets it get in the way of simply revelling in the magic of the medium, of the power of the moving image, how it can inspire us, horrify us, make us sigh, weep, laugh and dream. While this is a more text-heavy work than most comics, the artwork is still important here, and there are multiple delights to be had, from lovely splash pages (Melies mastering his early techniques, the amazing cityscape of Metropolis) to many smaller, intimate panels using scenes from so many films across more than a century, Ed often adding his own comic avatar into some scenes in appropriate stance and costume (I think he enjoyed doing that!). And for those of us forever in love with cinema there’s the simple delight of recognition of films from Ed’s panels, the flash of memory at seeing art depicting a scene from the movies we’ve loved, from the nightmarish twisted angles of Doctor Caligari to Goddard’s oh-so-cool Breathless or Kubrick’s 2001, and the memories they stir in us because those images are powerful, woven into our collective culture but also into our personal thoughts. 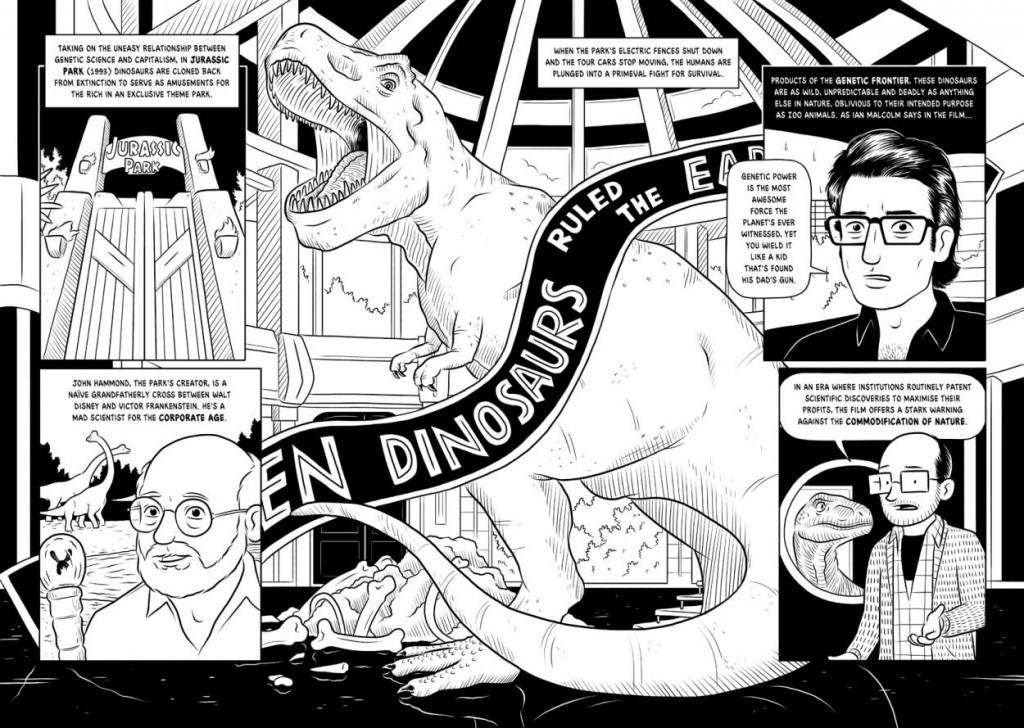 It’s a beautifully realised work, both celebrating and questioning cinema, richly illustrated with art that any film lover will recognise right away (and there is a simple film geek “trainspotting” pleasure to noticing the references – go on, admit it, you’re probably already done it just with the cover, haven’t you, how many did you spot right away?), while the structural idea of having themes for each chapter, a device carried over from the original mini-comics (although even the elements which made it from the originals have been extensively expanded and re-worked and re-drawn) gives a flow to the reading here. It’s a rich read, both in imagery and ideas, one medium used to cleverly explore another, and it offers pleasures to both the film-lover, to those of us who’ve waded through film-studies academia and also to those who have never given film studies a thought it is so accessible and friendly a read that they won’t be put off in any way (and indeed they may find themselves thinking a bit more about film and wanting to explore some of the references in the bibliography).

Ultimately Filmish is a book simply in love with cinema – not unquestioningly, it looks, it examines, it encourages the reader to do likewise – but it also remembers to just let ourselves go, to marvel at the magic of the movies and to re-experience that sense of wonder. A film-lover’s delight.