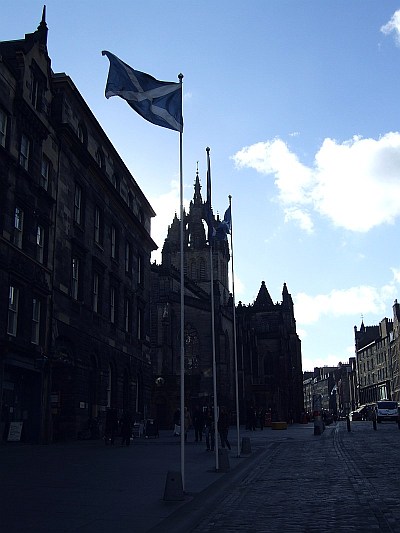 Saltires fluttering in the spring breeze on the Royal Mile, with Saint Giles cathedral behind (no, not named after Buffy’s Watcher!). 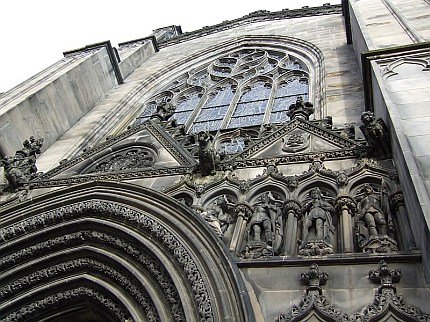 The entrance to Saint Giles; a few feet from this spot some brass panels mark the spot on the cobblestones where the gallows used to stand. Across the nearby junction is Deacon Brodie’s pub, named for the respectable citizen who by night led a different life which led to him dancing on air at the end of a rope on those same gallows – gallows, ironically, he had helped raise the money for as part of his ‘respectable’ front. 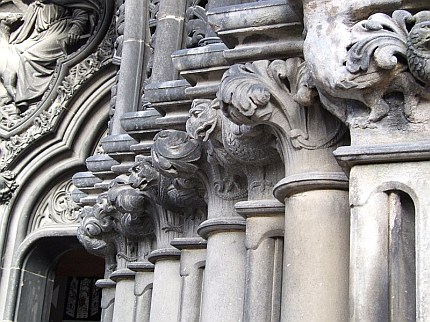 Love the different creatures on each of these small pillars flanking the entrance. 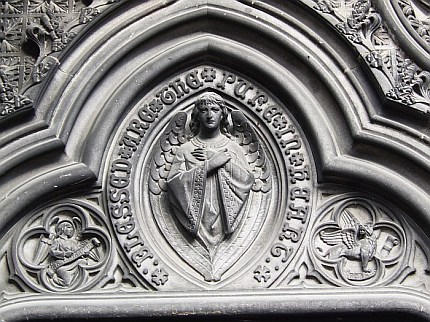 I like the winged creature on the lower right hand – looks almost Babylonian in style. 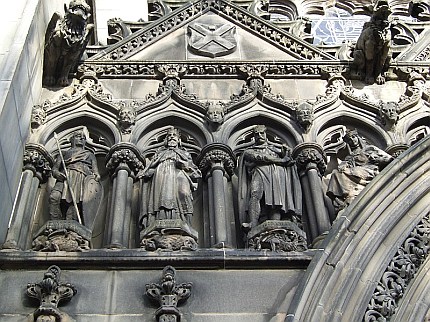 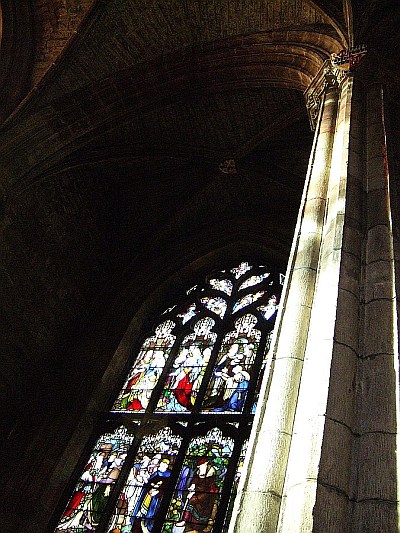 Inside Saint Giles; the sun was coming in the stained glass window behind me, dappling the stone pillars in shifting patterns of different coloured light. 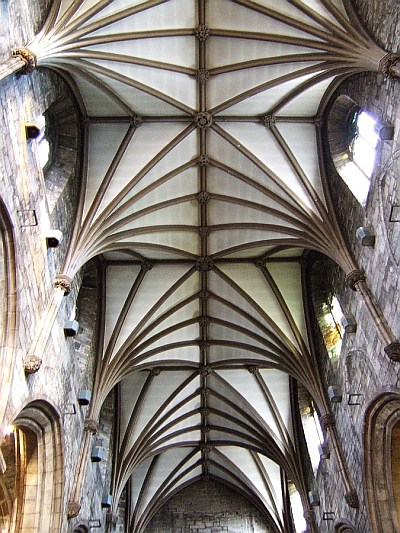 Bright spring sunlight spilled in this day, illuminating the stained glass, the vaulted ceiling and the stonework beautifully. Being Edinburgh there were tourists around, of course, but not too many just yet, so I could enjoy that very special sense of peace you get in old, stone kirks. Hard to believe in this quiet spot the opening shots of the Civil War would be fired in the form of stools hurled by outraged women as the ministers tried to read from a book of common prayer imposed by Charles I. A few months later dreadful combat would burn throughout Scotland, England, Ireland and Wales, ripping apart the kingdom and costing a king his head. How little could those women have realised what a storm was to break over the land. 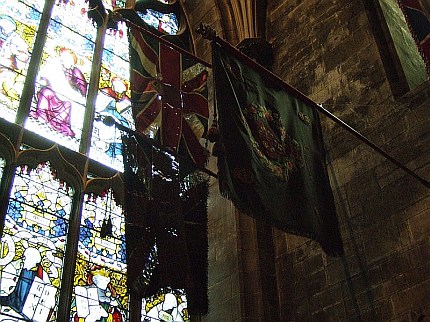 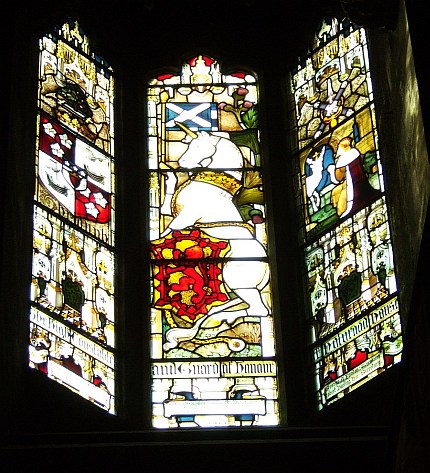 The Lion Rampant and the Unicorn, ancient insignia of the kingdom of Scotland. 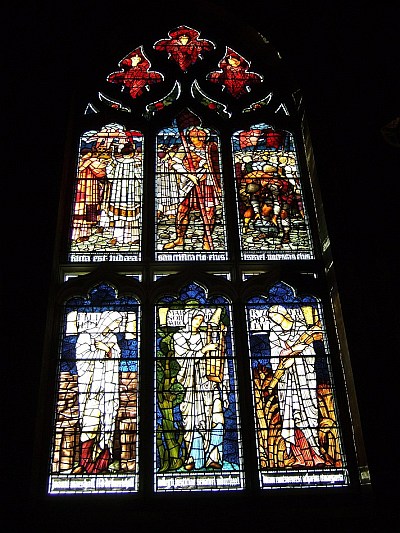 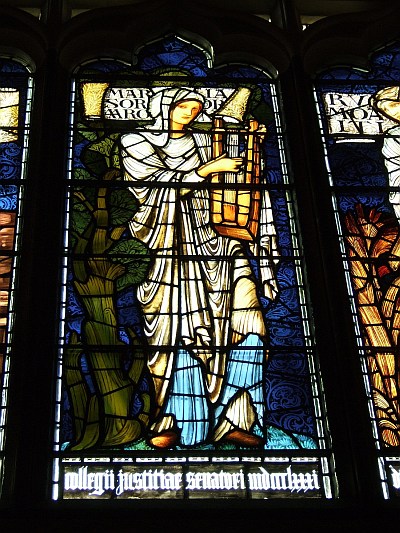 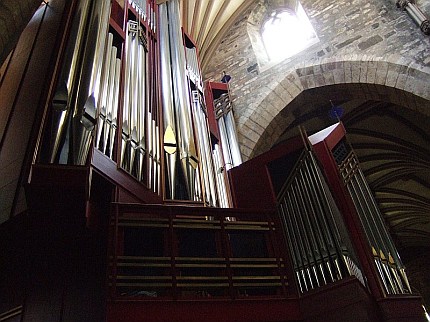 The pipes of the organ shining in a burst of light from a high window. 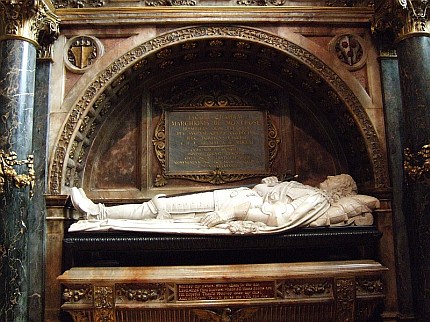 The marble effigy of Montrose. 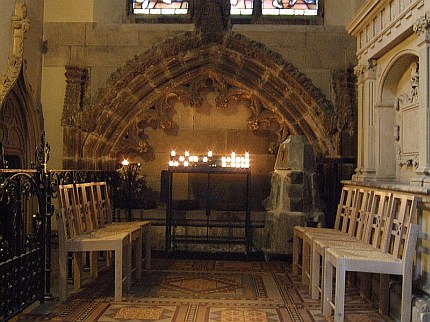 This tiny side-chapel is an especially peaceful spot, reserved for quiet contemplation and remembrance, where you can light a candle for someone you lost. 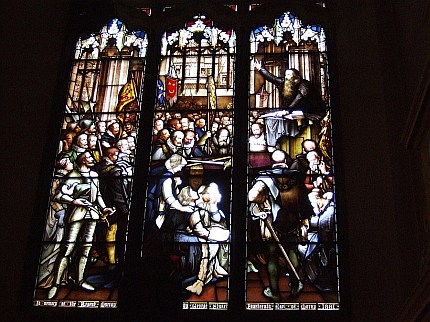 Not entirely sure, but it looks as if the bearded preacher in the upper right is meant to be that well-known barrel of laughs, John Knox, quite possibly the Scotsman most in need of a spliff and a shag to chill him out than any other in history. I had to stop taking pictures at this point, unfortunately, as an attendant came up and told me I needed to purchase a special permit to take photos, which seems a bit odd to me since this is supposed to be the national high kirk; I wonder if tourists can pay in their own currency and have their money changed right there in the temple :-)? It was only a few pounds but I objected to the principle; still, at least the staff were polite about it unlike the ignorant vergers of Saint Paul’s in London and, unlike the rude and unfriendly Saint Paul’s they do allow some photographs, but really, that can’t be terribly conducive to tourism in a major site in the capital, can it?