Bugs and moons and cats and cushions

I got totally floored towards the end of last week with what I presume was a bug; started as a bit of a headache, noticed it was a bit harder focussing on the computer screen at work, popped a couple of Anadin and didn’t think too much of it till I got home, couple of hours later my arms and legs feel like lead and my head feels like a mix of cotton wool and space dust, so I crawl into bed ridiculously early. Cue very sleepless night waking up either roasting and drenched in sweat (I don’t mind being sweaty in bed, but for the right reasons only) or shivering so badly I shook myself awake (very weird, don’t remember the last time I shivered). And all through it weird, linking dreams where I seemed to be walking through scenes of classic black and white movies (I think I was looking for Louise Brooks but she proved as elusive in my confused dream state as she was to most in real life). Interestingly even when half awake the dreams kept running. Add in some nasty dizziness and fatigue and you have yourself a nasty bug that seemed to come out of nowhere; fine in the morning, feeling iffy in the afternoon, utterly screwed by evening.

Next morning it felt like a very bad hangover, the sort you wake up from and find you have the hangover plus you realise you are still a bit drunk and crashing around, stumbling with no co-ordination and still either too hot or too cold. Found out since then that a couple of my family got hit with the same thing from nowhere, so presumably there is a nasty virus going round (that will teach me to juggle those ducks on the canal). Still a bit tired and feel the odd little resurgence of it, but not too bad now; forced myself off with a mate for a very long walk (yes, with Bruce the greyhound too, all excited as ever when he sees us putting on jackets “oh boy, oh boy, we’re going for a walk!!!”) to try and get the blood circulating before going off to check on Dizzy while Mel is away visiting her cousin in Norway. Naturally Dizzy took advantage of me feeling a bit drained still today to curl up next to me and use bits of me as a pillow. And talking of pillows, I got one of my photos of Dizzy looking incredibly cute and slumbering in the sun on a rug out in the garden and had it printed onto a big cushion last year for Mel’s birthday. I have been waiting patiently for her to curl her little furry form up next to it and stay there long enough for me to get a picture of her with it; naturally whenever I have seen her in front of it she has moved by the time I get the camera to take a snap, but after months and months of waiting I finally got that picture and here it is, Dizzy with the Dizzy cushion! 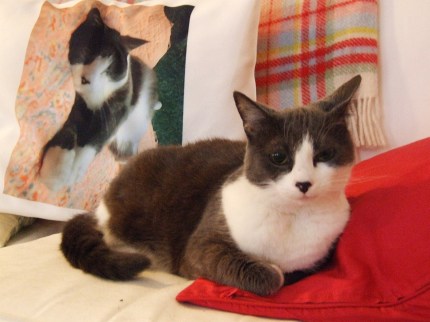 I also managed to get out for a little while on Saturday night and saw some of the lunar eclipse – amazingly we had a pretty clear sky for once in Scotland (poor Mel didn’t in Norway, clouds spoiled the show). There was a reddish-pink tinge to the moon for a while, it was a fascinating sight, must have been terrifying to people in the pre-scientific period of history (which is most of it, really) – one of my Fotolog friends, Foxglove, has a cool image on her flog here. Would have been a great night for doing a virgin sacrifice, although the only Virgin I wanted to slice up on a pagan altar as the moon was swallowed by Those Who Cannot Be Named would be sodding Richard Branson’s Virgin who have been busy posturing against Murdoch’s Sky this week which is great for them but a real pisser for their customers who suddenly found out they’d lost access to a bunch of their favourite major shows literally overnight (thanks for the advance warning, Branson, you numpty).

One company blames the other of course, both give contradictory reasons why talks broke down, all I know is I was with Telewest for years and subscribed to them because it was the only way to see certain import shows. Branson’s “we must be involved in every industry that exists” Virgin company takes over and a few weeks later the biggest entertainment channel is gone and a lot of folks will miss the next eps of their favourite shows this week while Murdoch and Branson engage in a pissing contest instead of looking after their customers, which is a poor way to run a service. I also notice that despite losing the biggest channel Virgin hasn’t offered to cut my bill to reflect this and actually boasts they are offering us more choice through a programme on demand service which gives us access to old programmes instead; that makes up for losing the latest new import shows like Galactica, Richard, thanks. Twonk.

I’m no fan of Murdoch but since his Sky has some of the programmes I want to see I need access to that and since I paid for that (and am still paying the same amount) but having it cut at no notice by Branson who has a long-standing personal and ongoing really ticks me off. And the fact he is still charging me the same amount for less proves that customer care is not on top of his agenda. Jeez, to think someone is willing to pay 100K to fly into space on one of this arsehole’s rockets when they get going…