That lack of information

I dropped an email to Lothian Buses suggesting they should have some decent signs up on the stops near me which are out of use due to roadworks and got a reply saying they put them up last week. I use them everyday and I never saw any and since a number of folks have been waiting at the stops this week oblivious I’m not the only one. If they are there then they are pretty poorly placed since no-one seems to have spotted them – even this morning I had to tell someone standing at my regular spot that they had to go along several stops to another street to get the diverted service. Still, on the positive side, as I headed to a different street to get one of those diverted buses this morning I saw one I usually get just picking away as I approached. Because of the diversions it is hard to work out when they will come, so it is annoying to miss one and have no idea how long it might be till the next. And then the very friendly driver saw the heavy traffic ahead, recognised me, opened the door and beckoned me in. So praise this time round for a very friendly service and isn’t it nice the way when someone unexpectedly does something like that for you it puts you into a much better mood for the whole day?

Road work signs have sprung up on the main road near me in the last week announcing that a chunk of this very busy road would be closed from Monday for quite some time for major repairs. Since this is one of the main routes for this side of the city I assumed this could have a major effect on the bus service. The sort of major effect that would mean the local bus company would put up some information on the affected stop to say, sorry, you can’t get a bus from here, you must head over several streets to this point to meet the diverted services. You’d think that. But not, Lothian Regional Transport never bothered their arse and even this morning there were folk standing at stops where no bus was going to come, not a single sign to be seen to tell them there was no service. If you went to their website then dug around in the news section you can find out this information; fine for me, but I am guessing not every single passenger who uses this busy route was able to do this, or even knew to do it – and they shouldn’t have to since it should be posted on the bus stops taken out of service during the work. Piss poor customer care. 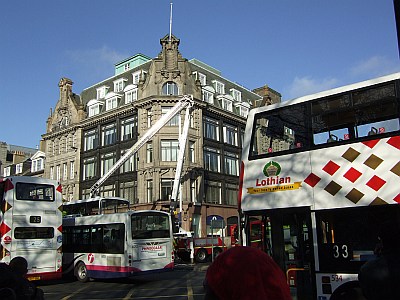 As usual I had my nose buried in a book on the bus to work this morning and it took me a few minutes to realise that the bus hadn’t actually moved for a while. Look up – hmmm, doesn’t look good, all I can see are the roofs of other stationery buses. Several minutes go past and nothing moves; infuriatingly I am less than a a third of the way to work. Assuming the endless roadworks that have been screwing things up so often are in play once more I give up, get off this bus and find a pile of exasperated folks doing the same from a score of other trapped buses, start walking. By the time I reached the West End of Princes Street I realised that the traffic backed up to Haymarket I was stuck in was just one part of the jam – there was a bunch of fire engines and a hydraulic lift working on a crunched double decker right at a major junction, so in four different directions everything was stuffed (and of course I felt a bit guilty for cursing road works etc when it was actually an accident).

It turned out that the bus at the back of this pic I snapped as I walked past (the one with the crane arm above it) had been hit by a truck carrying a crane which had ripped right through the roof just two or three minutes before – couple of minutes later and it could have been the bus I was on; scary how quickly and simply the everyday trip can turn into an accident. Some people were injured, but fortunately no-one was killed; the fire brigade used the hydraulic lift to rescue some injured folks rather than trying to get them down the narrow bus stairs. I walked most of the way to work, my thinking now changed from “I left earlier than usual to get a good start for this, dammit???” to “gee, it is a lovely sunny morning and I ain’t been harmed in an accident, life is actually good and hey, it was a nice morning for a walk anyway, eh?”.