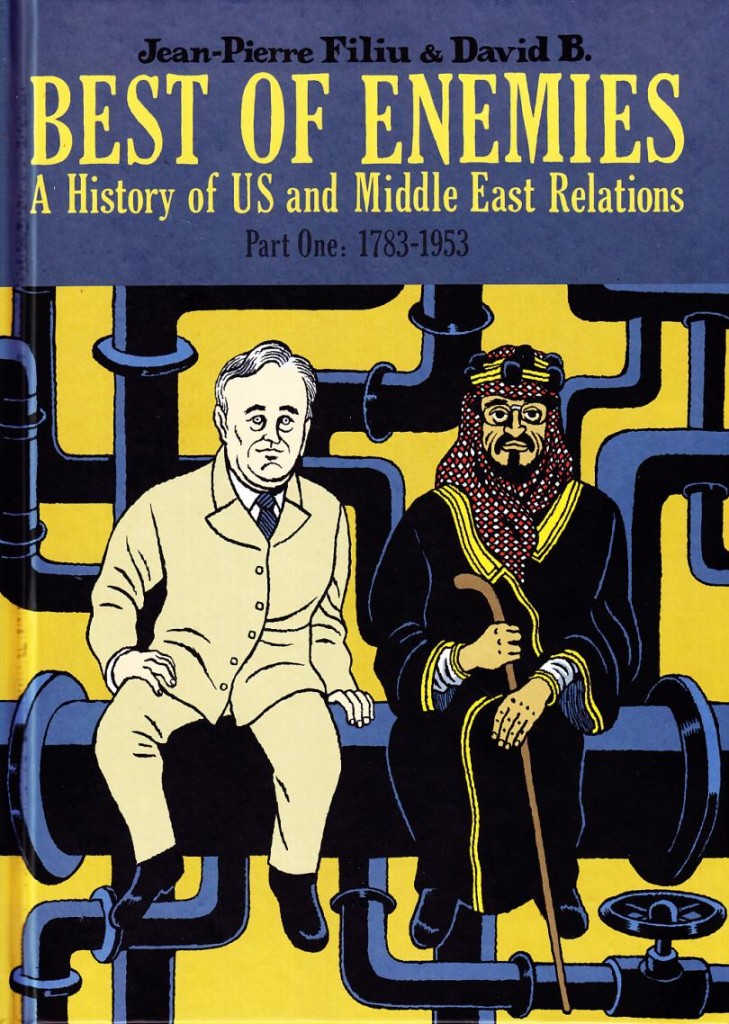 “During a war the kind of “evidence” people are looking for usually doesn’t exist.”

Our world, especially since the murderous events of 9-11, has been dominated by the relationship of the West to the “Middle East”, an often nebulous and catch-all terms applied to a wide geographical area and divergent peoples (although to be fair “the West” is a similarly catch-all term). And in particular modern international politics have been centred heavily on how the United States interacts with the Middle East, and the different ways the countries in that region interact with the US, some openly hostile, some allied (but always for a price of some sort), some can be a friend one day and a deadly enemy who must be fought to the death the next, as changes in administrations, ideologies and military and economic power (the two are often synonymous) dictate new policies and directions, decisions made in seats of government that will have huge ramifications for millions who really had little say in matters. Sometimes it’s a new oil refinery or rights to a naval base, sometimes it leads to all out war, and afterwards the shattered, pained aftermath of civil strife, more civilian deaths and desperate refugees trying to flee events they had no hand in, while in the West innocents are threatened by terrorism and fellow citizens become suspect simply because of their religion.

It feels like a very modern problem, this “clash of civilisations” as it has been called, or also “the clash of ignorance” as the great Edward Said noted. Of course it is not and those who read history will doubtless already be aware that there is a long and quite utterly sordid and immoral history lying behind those current events and situations. In fact there is much, much more than most of us probably know. I’ve read a lot of history over the years, and while there were elements in here that I had some familiarity with – going right back to WWI and Lawrence of Arabia, and British, French, Russian and Turk machinations over the region for strategic and resource control – Jean-Pierre Filiu (former French diplomat, historian and academic) and the award-winning David B’s collaboration here exposes so much history, from the European-facing shores of North Africa (now staging post for waves of desperate refugees and god knows how many drowned on the way, these lands have always been a focal point for events) to the Persian Gulf to Israel and Lebanon. It’s a hugely complex jigsaw over overlapping interests from various powers, from religious fundamentalist leader to greedy corporations with the ears of their governments and competing military and economic interests. 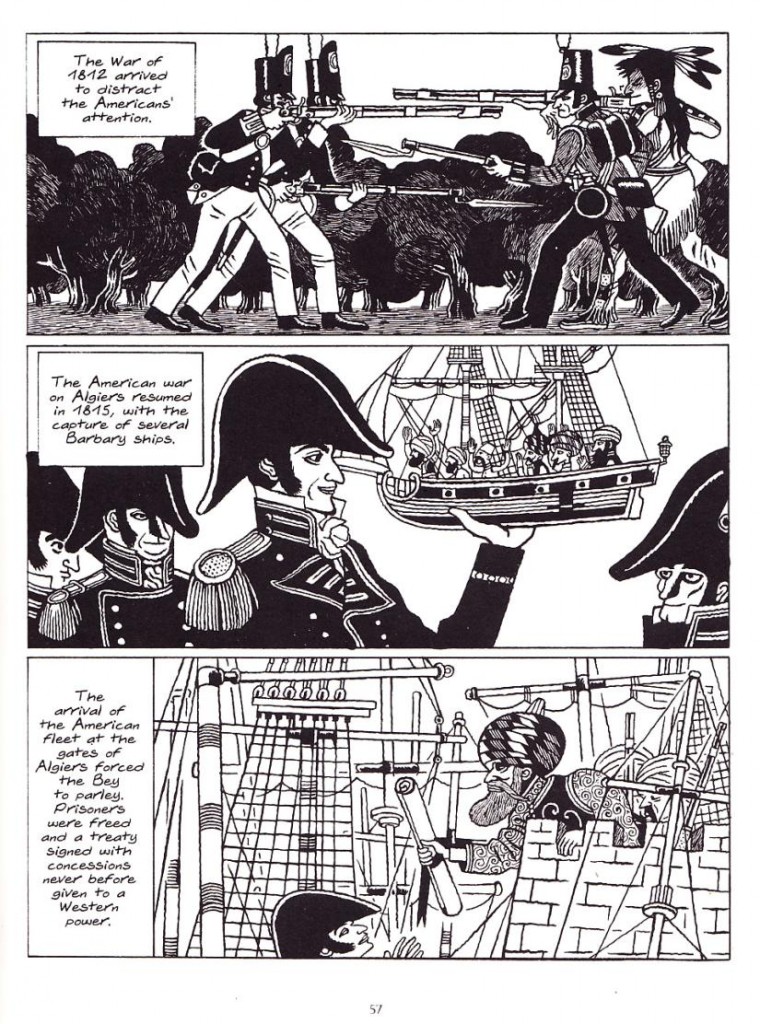 But it’s a complex subject which Filiu and David B make far, far for accessible using the comics medium (at a recent talk at the Edinburgh Book Fest Filiu mentioned in some of his university classes he also uses comics, such as Sacco’s Footnotes in Palestine, to teach his students about the history of the region). Filiu is a very thoughtful man with vast first-hand experience as well as academic learning on this subject, while it will surprise no-one who knows of David B’s work to learn that he creates some remarkably powerful and efficient imagery to communicate this subject which sprawls across decades and nations – from the devilish grin on the incredibly disturbing-looking US spook-master Kermit Roosevelt (cousin of the famous wartime president) gleefully working in shadows to change regimes (his techniques would later be applied by the US to regimes they disliked in South America too),  to stylised images of cannons with legs to denote military force (or cannon with hands coming out holding money bags or diplomatic scrolls to denote negotiation), while leaders, Arabic and Western, sprout oil pipes for arms or Islamist terrorist and US soldiers alike are shown as human bodies clutching guns, but their faces are just huge, projecting cannon barrels. 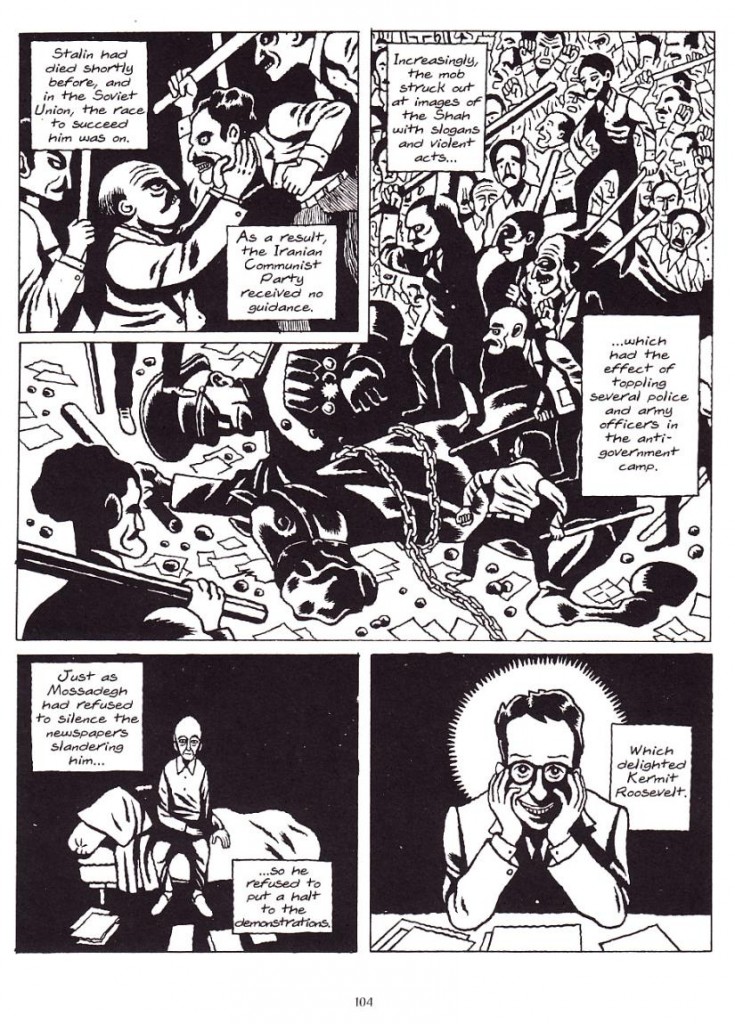 David B’s imagery is quite astonishing here, sometimes referencing older, period art styles (a few panels almost like woodcuts) and varies from realistic to surrealist images, and he plays often with perspective and sizes, powerful figures, be it a Western Admiral or an Eastern Pasha, shown as huge compared to the figures of those he is dealing with, or the giant turbans of 17th and 18th century pashas morphing to become a globe around which all the various parties orbit, or an image of the Grand Turk, his curling moustaches now curving blades of Turkish scimitars, diplomats are shown literally bending so far over to meet their aims that they are facing backwards, while others lie with mouths agape as a warren of oil pipes criss-cross the page, terminating above their open mouths which suckle greedily and insatiably on the oil. The imagery is quite magnificent, this is no simple depiction of events, this is the artist doing what a truly great comics artist does best, working with the author’s words but in a way which doesn’t merely illustrate or compliment, it enhances, tells a whole other aspect of the tale in its own right, making both words and pictures far more together than the sum of their parts. This is the work of a master, and I can see why Filiu mentioned that there will be a gap between the second book and the third, as the process is so exhausting to the artist. 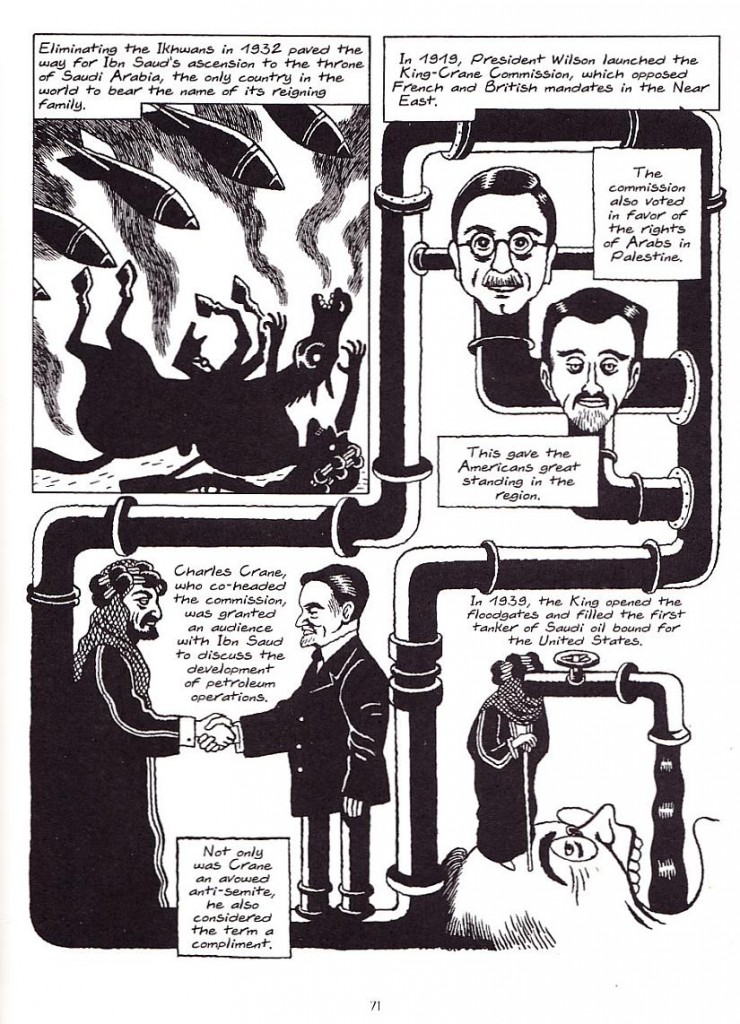 Space here does not allow for me to go heavily into the details of a century and a half or so of US interactions with the region (in which they actually coin the term “Middle East”) and besides, as I’ve already inferred, it’s far too complex to sum up in a review. Suffice to say it is a fascinating, compelling slice of history, laid out in an accessible, highly intelligent manner (and still retaining at certain points a playful sense of humour here and there to leaven the weight of other events), going right back to the newly independent US in the late 1700s encountering the infamous “Barbary” pirates that the European navies had long been battling (indeed the great Cervantes, author of Don Quixote, was once captured and forced to be a galley slave for these pirates who used the mask of religious jihadism to cover acts which were more for their own material gain than any true religious observance – not unlike many today misusing religions as supposed justification for attacking one group or another).

“It is just as dangerous to take action as it is to do nothing. There are thing we know and we know we know them. These are Known Knowns. There are also things we know we don’t know. These are Known Unknowns. But there are also unknown unknowns – the ones we don’t know we don’t know. What does this tell us? That the world we live in is vast and difficult, a complicated world where denial and manipulation are common currency.” Enkidu and Gilgamesh speaking Bush and Rumsfeld’s words – astonishing that anyone who speaks such gibberish could be taken seriously and allowed to make important decisions… 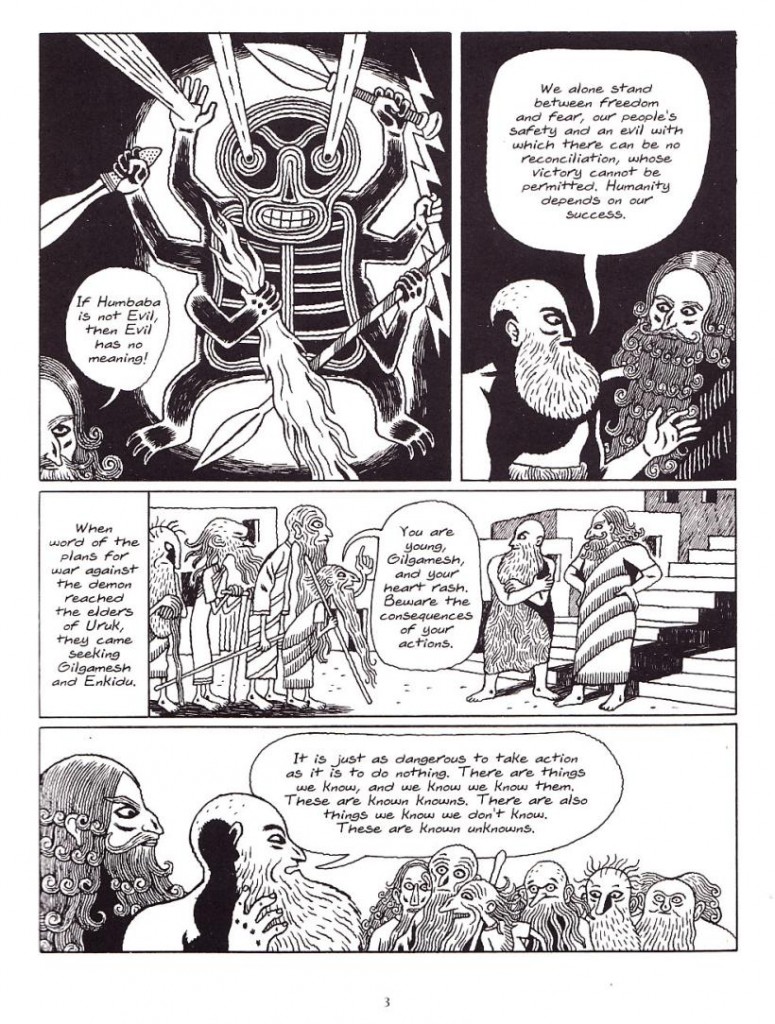 And the opening prologue is a wonderfully cheeky delight, taking the oldest written story we humans have, the great Epic of Gilgamesh, born out of those same lands we’ve so recently bombed to dust (the cradles of human civilisation, no less), but reworks that great tale that has been retold for four thousand years around the world, inserting actual speeches by George W Bush and Rumsfeld into the mouths of Gilgamesh and Enkidu to justify their warlike raids on neighbouring, resource-rich lands. This isn’t just history repeating itself (and repeating and repeating…), it’s myth and folklore and culture and history and the same mistakes over four millennia, and we still don’t seem to be learning. 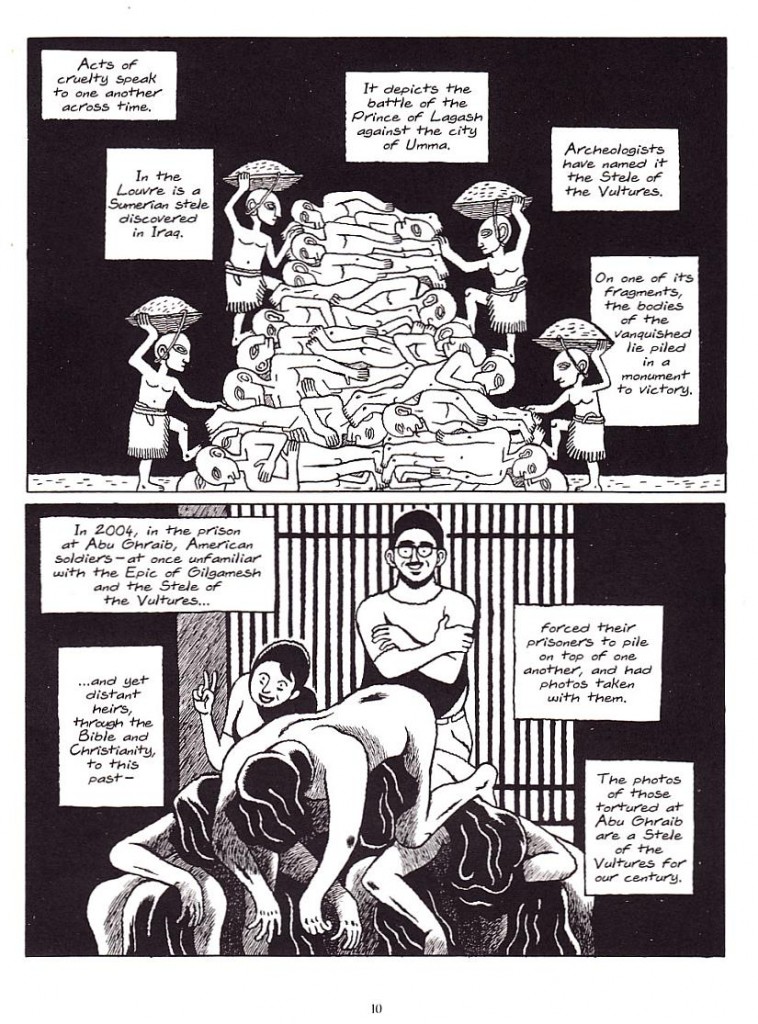 An image of an ancient Sumerian stele unearthed in Iraq (now in the Louvre) depicts a pyramid made of the bodies of enemies, piled atop each other, then cuts to the infamous human pyramid of masked prisoners US soldiers arranged in Abu Ghraib for their own amusement. The ancient stele is called “the stele of the vultures”, the modern image from Abu Ghrain “a stele of the vultures for our century”. For anyone who admires the way in which comics can open up such complex subjects, and who admire world-class comics art, this is a must read. And for the simple fact it puts in context so much of what has shaped our troubled, modern world, it is also a book everyone should read and then sit back and consider. A modern classic.