Had a nice photo walk around The Shore, the Water of Leith and near the Port of Leith recently, around dusk and then night. With the sun setting so early now it’s pretty easy to take some nocturnal shots without having to wander the streets late at night with the camera and tripod. I’m rarely down this part of town so this was a chance to take some night shots of an area I’ve not covered much of with the camera. Good, long walk, took a bunch of pics, got some exercise but man, damnably cold – okay when you are walking about, but very chilly when standing still to take a long exposure shot.

This is Commercial Quay at “blue hour” (when it’s dark but there is still a slight bit of pale light in the sky from the now vanished sun, one of my favourite times for taking night shots. This was a long series of old warehouse buildings – you can still see the attachment at the top floors for the pulley to lift up loads) for the nearby docks at Leith. They were very run down for a long time, but have, like the waterfront areas in many formerly industrial or commercial areas in many cities, been regenerated, which is preferable to tearing down those fine, old stone buildings, and it’s now a busy area of bars, cafes and restaurants: 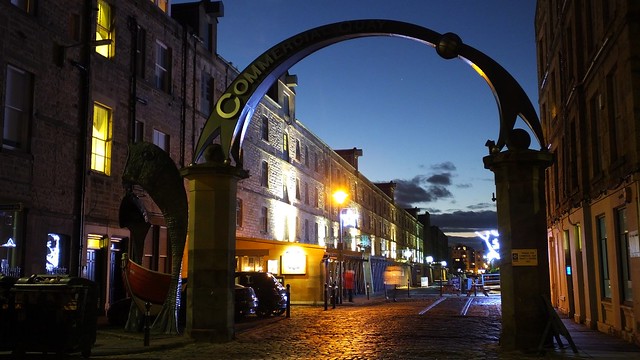 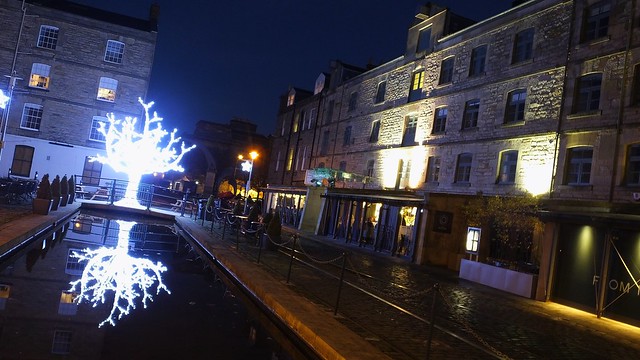 Nearby is Teuchter’s Landing, which is the same company that has Teuchter’s in the West End of the New Town, which is slightly pricey but still a favourite pub of mine (also dog friendly, which is handy if I am meeting my chum and his hounds). This one is right on the waterfront, where the Water of Leith starts to meet the Port of Leith, and then the mighty Firth of Forth. In fact the back of the pub not only sits over the edge of a spur off the river by the docks, it even has its own floating outside beer garden moored on the water! Although understandably nobody was using it on a cold evening in November (although a couple of smokers were sitting outside the front of the pub, heavily wrapped up. 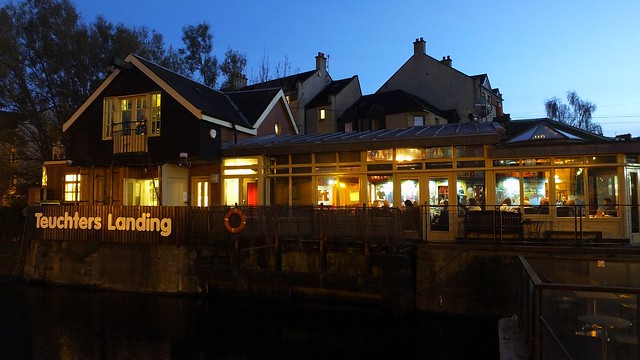 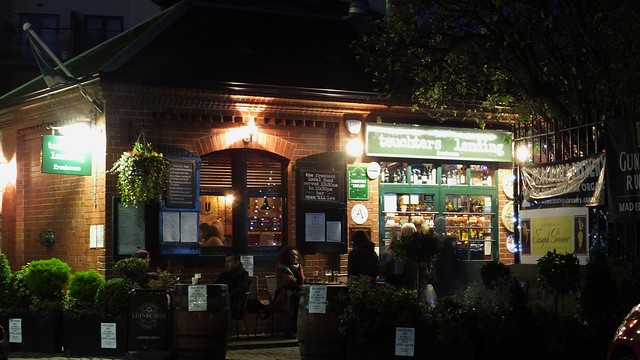 It wasn’t quite full dark as I walked back over to the Water of Leith, although it was darker than it appears here where the camera sat drinking in much more light on a long exposure. This is down at the very end of the Water of Leith, which winds its way through the city (it runs near my flat and offers a “countryside” walk to the National Gallery of Modern Art rather than walking through town) and eventually makes it down to Leith and the busy Shore area of bars and restaurants. This is by the Malmaison, and after this spot is just the old swing bridge and then it opens into the actual docks. 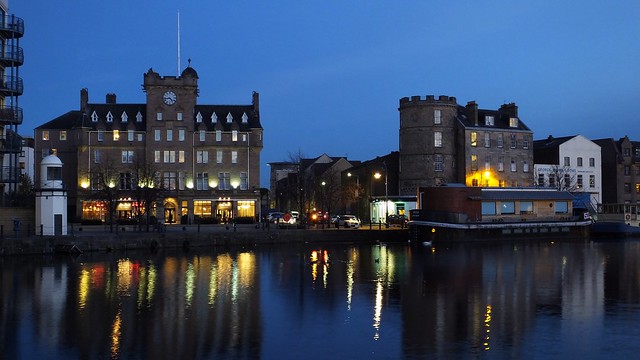 Only a few moments walk later and by now, even though it was probably only about half past five, it was fully dark, allowing for some nice reflections of the lights and buildings in the now dark waters. For some reason this part of town often reminds me of parts of Belgium and the Netherlands: 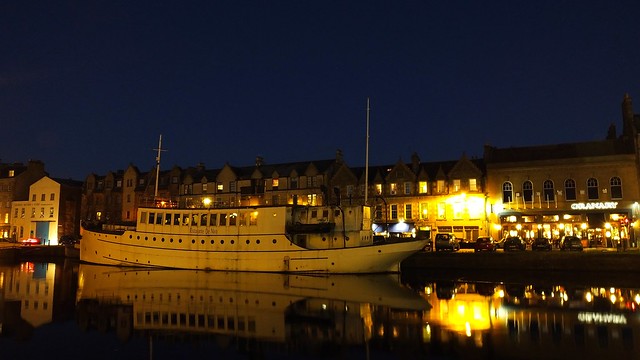 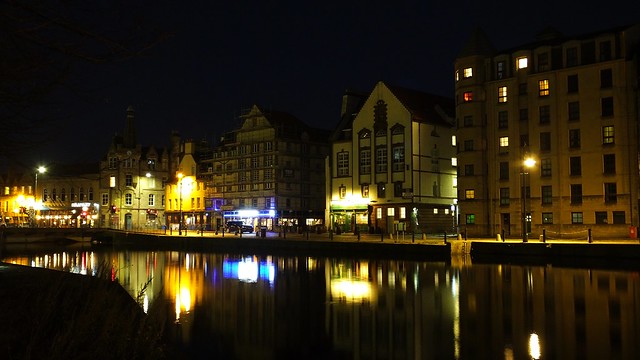 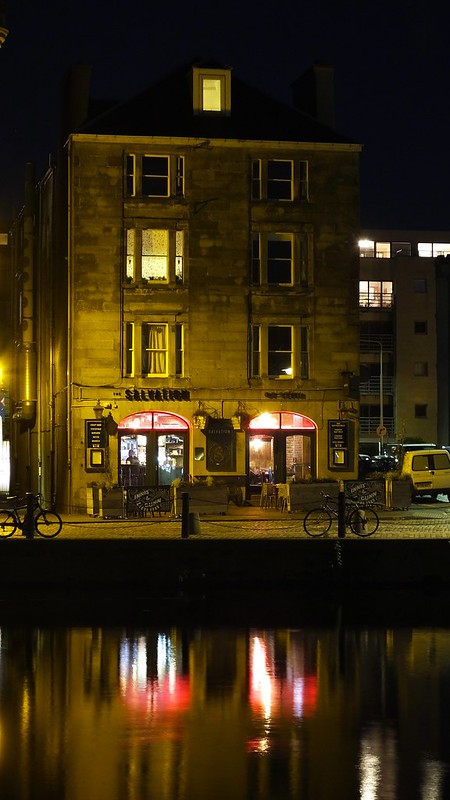 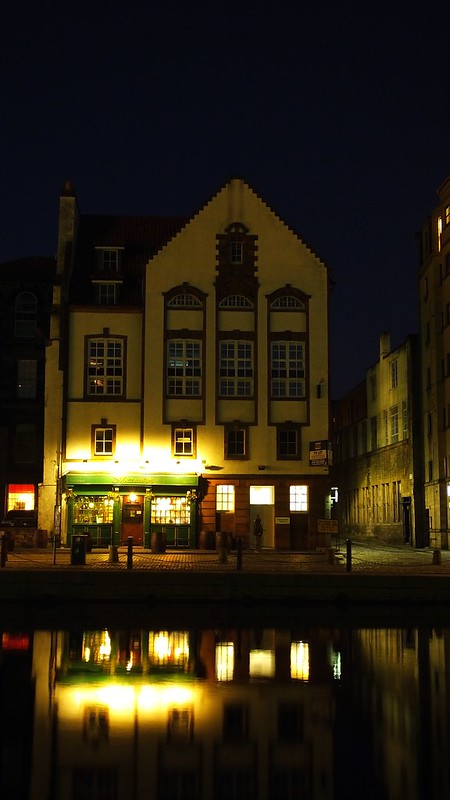 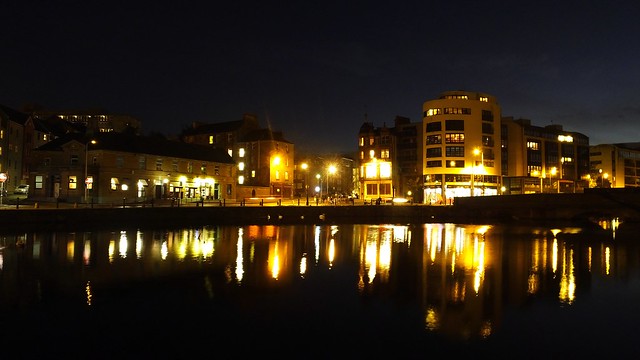 And this is Mimi’s Bakehouse, a family-run cafe, where I thawed out with some really nice hot chocolate and a delicious raspberry Nutella cake: 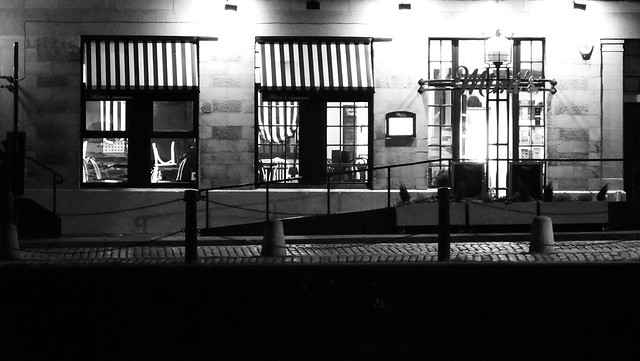