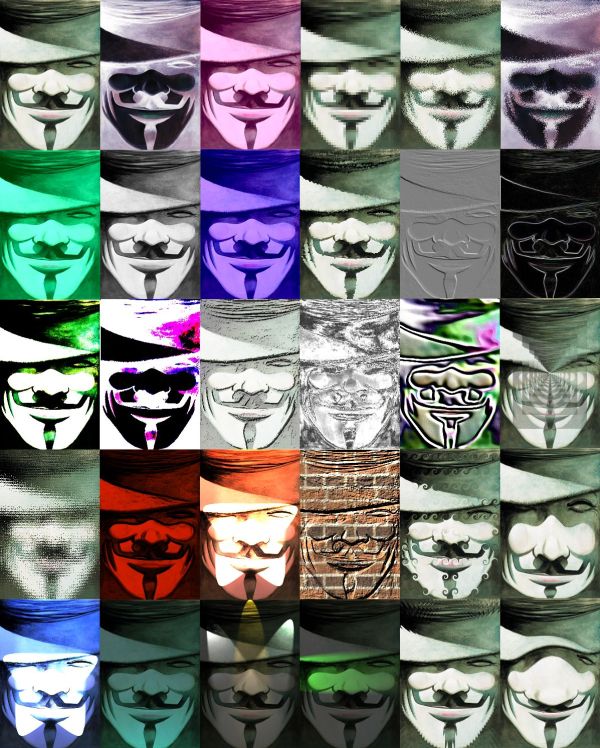 I’ll no doubt talk about the movie adaptation of V For Vendetta some more at some point soon – just caught it for a second time last night as Mel hadn’t seen it and I was only too happy to go along again – but since I was in Photoshop fixing up some new pics I felt like playing around and did this semi-Warhol image of Dave Lloyd’s great artwork. For the second time I found the section about the lesbian actress Valerie in the ‘resettlment’ camp choked me up and had me blinking furiously to avoid tears. I always thought that one of the most intensely emotional scenes in the original book and every time I re-read it it got to me – I was probably most worried about how it would be handled in a film version. I needn’t have worried, it was handled with utmost respect for the source material. After 20 years it still gets me; me reading about Evey, a fictional character, who is in turn reading a message written on toilet paper slipped through a crack in the wall of her prison cell by another fictional character, telling her tale and yet I totally believe in them both when I read it:

“I don’t know who you are. Please believe. There is now way I can convince you that this is not one of their tricks but I don’t care. I am me and I don’t know who you are but I love you… Perhaps I won’t be able to write again, so this is a long letter about my life. It is the only autobiography I will ever write and oh god I’m writing it on toilet paper… It is strange that my life should end in such a terrible place but for three years I had roses and I apologised to nobody. I shall die here. Every inch of me shall perish. Except one. An inch. It’s small and it’s fragile and it’s the only thing in the world that’s worth having. We must never lose it, or sell it, or give it away. We must never let them take it from us… Within that inch we are free.”

It is almost as if Alan Moore and Dave Lloyd were giving a voice to the untold millions who died slowly in the concentration camps, the chambers of the Inquisition, the Disappeared of Junta-era Argentina, the victims of ethnic cleansing in the former Yugolsavia (so ironic Milosovic would die along and unloved in a prison cell) the millions of often anonymous victims who have suffered and died in the prisons of dictators (or the prisons of supposed democratic liberators for that matter) and so many other dark places. Valerie spoke for them, a fictional character speaking for the ghosts of those who were once real and laughed and loved.

That’s one of the reasons when someone gives me their igorant, uninformed comment “oh I don’t read comic books” I show them V For Vendetta. If there is one thing I know it is good storytelling, so, all false modesty aside, believe me when I tell you I find a book so good that I have re-read it time and time again for nearly two decades it is a damned good book. If you are a person who never touches graphic novels and you decide to pick one up and try it, pick V. It’s also one of the reasons I am a stubborn git when it comes to my freedom of expression or anyone elses. Most of us won’t face what those characters go through or the real people they represent and speak for, but in times when democratic governments want to restrict more freedoms ‘for our protection’ it is more important than ever that we don’t let them take that inch.