I found these on Cracked, with their spoofs of well-known cartoons responding to the whole Danish-Muslim cartoon fiasco. I especially liked the third one here, kind of sums up the way fundamentalists (as opposed to most Muslims) feel about, well anyone who doesn’t do exactly what they are told to think. 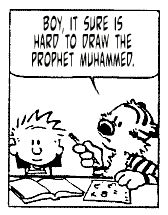 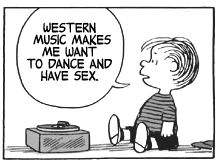 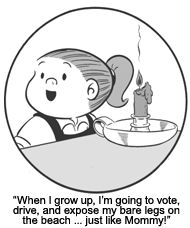 Elsewhere I came across an Israeli comics collective, Dimona, who choose to respond to Iran’s oh-so mature cartoon counter-attack where they are running a competition to create the best Holocaust cartoon. Quite why is a bit of a mystery since Israel had bugger all to do with the cartoons from European newspapers, but why let that get in the way of a good two minute Hate, eh? If I were cynical I might think that the hordes just like to get upset about anything and have a go at, well, anything really. Does make it difficult to establish a dialogue with those countries though, since they don’t have much of an agenda to engage on diplomatically, they just like stirring their folks up to hate something – you might even think they were trying to distract their rampaging mobs from looking to closely at the way their repressive governments run their countries…

Anyway, the cool folks at Dimona decided they wouldn’t take this lying down and are of the opinion they can do better cartoons than a bunch of shagwit bigots in Tehran (which they can). So they are organising a contest to see which Jewish cartoonist can do the best anti-Semitic cartoon! Thus taking a hate-filled response and countering it with creativity and good humour and, incidentally making the Iranians look like even sillier buggers than they already are and turning the whole thing into a joke. Well done, Dimona!

Apologies if anyone gets this posting twice, I posted it on Saturday and it went up fine, then on Sunday it had simply vanished from the blog and even from the blogger admin screen, so I am having to repost it.