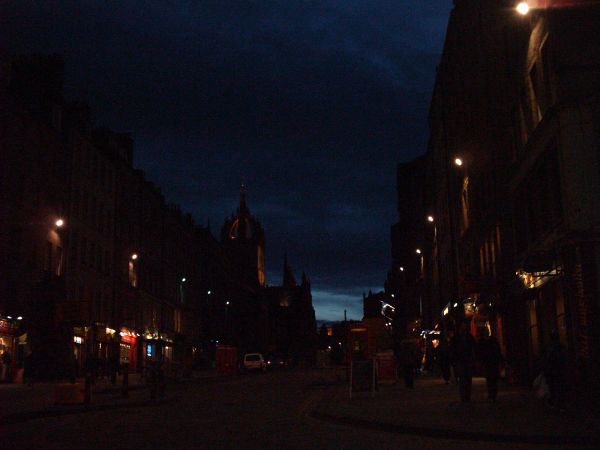 Edinburgh’s Royal Mile from the Tron Kirk, looking westwards up the spine of the ridge towards the Castle, the sun having just descended below the horizon this very evening. Saint Giles Cathedral on the left hand side, where the opening shots of the Civil War took the form of stools thrown at clergy who dared to use the standard prayer book King Charles commanded to be used, while John Knox’s house is minutes in the other direction. Mary King’s Close is only yards from here, a whole street beneath the 18th and 19th century buildings, sealed over after the plague. Only yards from here again were scaffolds for the condemned where the infamous cannibal Sawney Bean was put to death. Once upon a time a centre of book publishing and a meeting place of the pre Union Scottish parliament were within minutes of this spot.

During August this stretch is closed to traffic and it is full of market and craft stalls, jugglers, mimes, singers, dancers and all manner of Fringe performers doing their best to attract audiences as they queue to buy tickets in the Fringe offices. Five minutes from here is Greyfriar’s Kirk where the National Covenant was signed and years later a small dog called Bobby would continue his devotion to his master, sitting by the grave year after year. Turn right from here and you cross North Bridge, spanning a valley to what we still call the New Town, although it is two and a half centuries old. I like living in a city where something older than America is still described as ‘new’; it gives you an idea of the way we see time here.

A few minutes on the left would bring you to the Old College building, home of the Playfair Library, one of the finest neo-classical interiors in the city and a powerhouse of the European Enlightenment. Standing here at different times in history and you could have spotted Sir Walter Scott, Arthur Conan Doyle, David Hume, J M Barrie or Robert Louis Stevenson walking past while several cafes within minutes of this spot gave shelter to a cash-strapped single mum working on a little book about a boy called Harry Potter. A few minutes up the way and you pass Ramsay Gardens, home of the poet and publisher Allan Ramsay, creator of the very first lending library in Britain. James Court is closer, where Boswell once had his home and entertained Dr Johnson, with the great philosopher David Hume’s home nearby too.

Just past the Cathedral is Deacon Brodie’s, a pub named after an Edinburgh worthy who led a double life and helped inspire the tale of Jekyll and Hyde. Descend the Mile and you will pass the new Parliament and come to the gates of the Palace of Holyrood, finding a large royal park and the rearing rock of an extinct volcano casting its shadow across the city, only minutes from where this picture was taken in the centre of the city, one of the places which inspired James Hutton as he helped shape the new science of geology. Its one of the things I love about living here – a few minutes walk, even a bus journey to work in the morning and you pass through centuries of history, science, art and culture, if you take the time to stop now and then and let yourself see it. And it goes without saying that there are dozens of quite excellent pubs within minutes of here. I like that part of living in Edinburgh very much too.