The city is in full-on Festival mode and it is ludicrously busy – even getting lunch from nearby Piemaker (mmmm, pies….) is harder as there are lines of tourists, backpackers and Fringe folk to get past. Each evening tremendous bangs echoe around Edinburgh as that night’s Tattoo concludes on the esplanade of the Castle (not my favourite event, although I have to admit the Castle, lit with great iron braziers of flame for the Tattoo looks marvellous in the flickering light).

There’s a venue right under the floor where my desk is at work and Fringe goers and performers are to be heard noisily in the lane beneath the staff room window. Every afternoon one guy leads some would-be audience memebers in a chorus of ‘what do we want? Free tickets! When do we want them? Now’ for several very loud and annoying minutes. Tired of this every day after a week I leaned out the window, waited for the appropriate moment and bellowed ‘free Tibet’ instead. My spontaneous artistic contribution to the Fringe :-).

In the streets its pretty normal to pass Kabuki performers in full makeup walking past an 18th century building, people on stilts, cloaks, top hats, you name it, although even I found the spectacle of a man in concentration camp uniform leading an SS officer round on a leash and collar, handing out fliers for their show, worth watching (its easy to get jaded and blase about the manic Fringe when you live here).

And then there were the mimes… Like, I suspect, many people, I have an instinctive distrust of mimes. I find them creepier even than clowns – maybe its the un-natural body language – and, as one chum agreed with me, their tendency to imitate passers-by when performing on the street is bloody annoying (and lead to a great bit in Berk Breathed’s Bloom County strip where Opus the penguin beats a street mime unconcious with an olive loaf). I spotted this gaggle of mimes smoking ciggies in the back alley below the staff room window before going back into the (literally) underground venue beneath the store deep in the Old Town.

Having read Jeff VanderMeer‘s bloody brilliant City of Saints and Madmen I was not fooled by these folks – I know they are almost certainly trying to lure the unsuspecting visitor into the subterranean lair of the Gray Caps, because beneath every city (except maybe New Orleans where underground = underwater) there are tunnels and caverns which all lead to underground Ambergris… 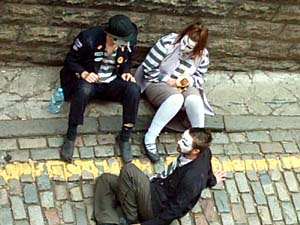 And speaking of Jeff, he kindly contributed a list of his favourite graphic novels for the feature in the Recommends bit of the FPI GN site a while back. He’s just posted on Vanderworld to explain a bit more of the reasons behind the selection of his favourite graphic novels, so if you’re a GN fan (or a Jeff fan, or both) you might want to have a gander. He also had a very good edition of his regular Five Questions interview with other authors; the answers by Kelly Link are excellent and I really want to read her Magic for Beginners now, but its not easy to source in the UK.