Remember a couple of months back (was it really that long ago already? Where did that time go?) when I was talking about visiting some friends to see their new baby and the incredibly cute Starfleet teddy bear I’d gotten him? Well, his dad just sent me a new pic of him with Cap’n Bear (who I still think has more acting ability than Shatner). And I thought his grinning visage with Cap’n Bear would go well with the picture of Dizzy in spreading some nice thought after continually grim new bulletins. How totally cute does the wee man look here? 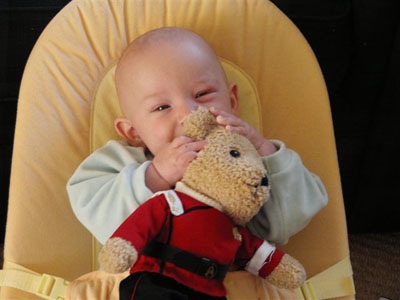 Speaking of little Dizzy, Mel is off visiting family in Oslo, so I’ve been round taking care of Dizzy a lot. Shame I can’t just bring her down to my flat for the weekend to stay with me and the girls – it would be like a pussycat sleepover party for the three of them. Except in practice it would probably freak out all three of them, so probably not the best idea! Since much of looking after her involves playing with the ball of wool, or what’s left of it now, although its not clear which of us gets the most fun from that (its probably about even) and prodigious amounts of tummy tickling it’s not a hard chore.


Managed to fit in a couple of movies as well – Gordon and I finally caught Batman Begins, which, of course, necessitated an adjournment to the Caley Sample Room afterwards for a discussion of it (and since we were there we had to have a few beers). On the whole not bad – draws heavily on Frank Miller’s Batman Year One (not a bad thing) and there were elements of other Batman epics in there, like War Games and Contagion. Looked good too – very mean and moody with the before and after versions of Gotham working well, although the grim later version does, as many movies do, owe a huge visual debt to Blade Runner. Certainly a lot different from the Tim Burton movies, which I enjoyed, but were really Tim Burton movies, not Batman movies.

Before going round to look after Dizzy today I caught Descent, from the writer-director of the delightful werewolves versus army squaddies in the Highlands romp, Dog Soldiers. Didn’t like it as much as Dog Soldiers, I have to say. Its a competent horror but not anything special like its predecessor. If you’ve watched a lot of horrors then you can largely guess what’s going to happen, although it is nice to see a solid, workmanlike horror instead of the watered down rubbish or remakes of Eastern flicks we normally get these days (Cabin Fever last year was similar in that it broke no new ground, but was a nice return to solid horror and not Scream or I Know What Script You Rewrote For a Summer Flick). Pity the underground cannibalistic dwellers looked so much like LOTR orcs though – and it basically stole from old horrors like Death Line (in-bred cannibals living under the London underground), but passable.

Big news on the movie front was that the box office for the Edinburgh International Film Festival opened on Friday at 12pm. Unfortunately the phone line was constantly engaged and their much-vaunted new-look website they’ve been trumpeting was bloody useless – kept crashing, couldn’t process payments or reserve tickets. Sure there would have been a lot of folk trying to get tickets as they opened at 12 but they should have been ready for that. I was desperate to get tickets for the UK premiere of Joss Whedon’s Serenity (the Firefly spin off) and Dave McKean and Neil Gaiman’s MirrorMask. I stopped at the box office on the way home from work and Serenity was already sold out, which really pissed me off since I had tried a number of times to book them online and on phone.

Good news is that I did get tickets for MirrorMask! I’m very pleased – been dying to see it and Neil announced on his journal that the EIFF were going to be screening it (I emailed them way back during Sundance and suggested it as a film they should pick if they could and they said they hoped to get it). I’m not sure if they’ve even set a release date for it in the US let alone here yet, so I’m especially pleased to get these tickets. I’ve been circling more films and will be taking advantage of the discount I get because of my movie pass to book a pile more (there’s a French film with Gerard Depardiue and Daniel Auteil together which I’ll have to see and Romero’s Land of the Dead – what a mix).

Should be taking a week off to enjoy it (hard to believe by the time of the Film Fest I will have been at FPI for 6 months and its time to start thinking about taking holiday time). Website and phone problems aside its a great looking Film Fest (as always – and they always get some SF and horror in there unlike the Edinburgh Book Fest which features very little, despite the fact we have anumber of genre authors right here). Circled a pile of films I fancy, now have to check they don’t clash with one another then swing by the box office to start booking some more. But tickets to MirrorMask in my pocket and I’ve just finished a proof of Anansi Boys – its looking like a good year for Gaiman fans!