Actually, with all that’s been going on recently – anarchist riots in Edinburgh over the G8 (oh that was fun – days of sirens, choppers and road closures) and the dreadful London attack I thought perhaps it would be good to post something nice. So, here’s a shot I took in Melanie’s garden of little Dizzy, younger sister to Zag. It’s good Mel is letting her out again – she was upset again last week when the council erected speed bumps as part of a traffic calming move.

Guess where? Yes, almost exactly where the little guy was hit by a car outside her house… Naturally that brings up the ‘what if?’ effect; what if they had put it up a few weeks ago, but that’s a game you can play forever to no real effect (and I’m sure there are lots of folk in London playing a worse version of that ‘what if?’ game in their heads right now, what if their wife or husband had walked that day instead of taking the tube).

Anyway, I think we need something light and lovely to clear the air, so here’s my cute little Dizzy, snoozing in the garden on a summer afternoon by our feet. 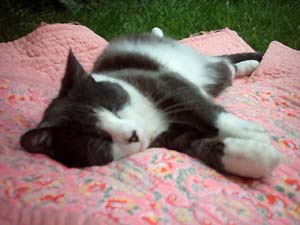 Altogether now – aaawwwwwwwwwwwwwwww. And yes, her little white tummy is incredibly soft. She purrs like an outboard motor. Doesn’t she look like she should be on one of those schmaltzy Hallmark cards?!?! Don’t let the tiny body and cute look fool you though – she thinks nothing of chasing cats twice her size out of her garden! Maybe it was those Xena episodes she used to watch with me when she was a kitten.