You gotta fight, for your right… A sunny, summer day in the ancient city of Edinburgh and a day when it just so happened that over 220, 000 people arrived in city – that’s equivalent to about half the population of our compact but gorgeous city. A quarter of a million people marching ahead of the G8 summit and before the Live 8 concerts began their broadcasts. Kids, teens, students and parents mixing with silver-haired (and bearded sometimes!) eldsters and from Edinburgh, the rest of Scotland, the British Isles, Europe and even further afield.

Yes, there’s a hellish amount of disruption in our city right now, with a lot more to come (who knows what will happen with the Anarchist march tomorrow) and many shops have boarded up their windows, streets are closed and polcie have been drafted in from across the land to bolster th Edinburgh plod (today we passed a couple of police cars with Greater Manchester Police Foce marked on them!). There’s still the Live 8 gig in Murrayfield here to play on Wednesday and the actual arrival of the politicians who have been given a very real demonstration (in all senses of the word) of what their electorate expect of them.

Yes, it is also true (although hardly anyone mentioned it yesterday) that only so much cna be done by the West – if many African countries continue to be run by dictators or corrupt officials posing as democratic leaders who spend the money on new bullet-proof Mercedes instead of helping their folk then little will happen. But this was about raising awareness and politicians, regardless of their own feelings on this subject, all have an instinct for survival and that survival in office means paying at least some attention to what the people say. I think the people said a lot. It’s bloody amazing. 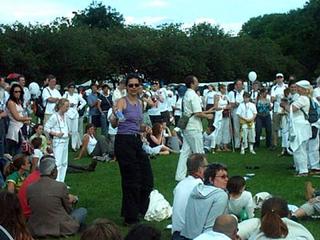 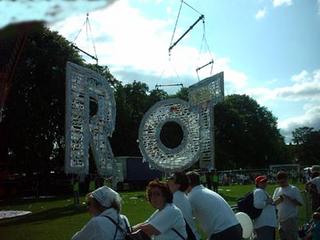 a large Make Poverty History sign was to be raised, with each letter covered in notes written by the people expressing their thoughts and hopes. Technical problems meant it took forever to raise them and as this false start shows, sometimes with unintended consequences! 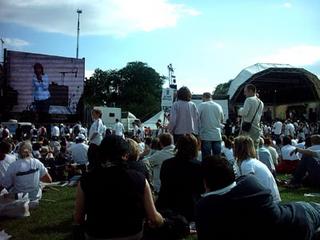