Time I blogged on something else, I think – not had the time or the inclination the last week, but it’s time to get things moving once more, so I thought I’d share with you a cool graphic novel I had to treat myself to when it came into the Planet: We3 by Grant Morrison and Frank Quitely.

It’s a curious mixture of one of those Incredible Journey-type movies Disney used to make of brave animals crossing the Rockies to get home to little Rusty, military-industrial complex conspiracy and cybertech. A dog, cat and rabbit have been used as the core of an advanced weapons system for a secret military project.

Leaving aside the dubious morality of experimenting on animals to begin with this is even worse because the animals are not labd animals but had been family pets – we see Have You Seen? posters for each of them throughout the book. Encased in their robotic armour (which has distinct Manga overtones) the poor animals have been trained to operate the massive inbuilt weapons.

They have also been trained to talk a broken and simple English and the scene where the dog kills soldiers sent to ‘decomission’ them is incredibly touching; he reacts with his training and wipes them out, then looks at them and mutters ‘bad dog, bad dog’… The cat is a little more pragmatic – he is the point man and the design team are more than a little worried about what the cat will do when they try to shut it down. 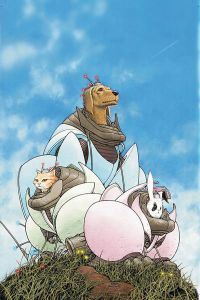 After escaping the three of them try to find a place they barely remember, a place they called home once upon a time. Yes, I know, it sounds like it could be a bit syrupy and in other hands it may have been, but Grant Morisson is one of the top comics writers around and the Glaswegian writer isn’t known for giving you something predictable (have you read the Invisibles???), while Frank Quitely’s artwork here is top notch. James Lovegrove, author of the excellent Untied Kingdom and Worldstorm picked it as one of his favourite graphic novels in a feature for the new FPI website I am working on (you can see his mini review on the bottom of the page on the site).