Young heir to the throne inherits upon the death of his father and sets out to avenge his murder and take control of his kingdom. Ho hum, sound pretty generic, doesn’t it? Even the twist that his father, the king, was not murdered but took his own life to make way for his son to build the peace he could not and that his scheming uncle makes it look like murder for his own ends may not sound overly original; perhaps a mix of Hamlet with any number of fantasies.

Wrong. This film is called Strings and it is quite the most remarkable and utterly gorgeous film. Shot over four years the entire film uses puppets for the characters, strings and all. In fact, central to Strings is the idea that this is not just a story told using the puppeteer’s art but an actual world where the inhabitants are puppets. Their architecture features no roofs because when each soul has strings which reach right up into the heavens why would they have roofs in the way? The prison has no bars, just a simple grid ceiling which stops their strings from wandering freely. When seen from a distance the city has ropes and strings by the thousand reaching into the clouds. Elderly characters have faces of gnarled wood instead of the smooth sculpture; nobles are well-finished while slaves are of the roughest wood.

When any string is cut it is like a blow to the body of one of us; when the head string is cut, death follows. In one of the most unusual birth scenes ever a new baby (which has been lying amidst the curls of wood shavings from his carving) is given ‘birth’ by his mother as the infant’s delicate, new strings curl down the mother’s then reach towards the still infant to be attached by the midwife in an almost inverse of human birth where the midwife must cut the connection between mother and child.

It’s an utterly beautiful story; ravishing to behold and one of those fantasy worlds you can feel yourself slipping into completely – the fact these are wooden marionettes matters not one bit, you buy them as characters, you empathise with them, feel for them and, thanks to the incredible artistry of the puppeteers, you ‘see’ expressions and emotions from them. 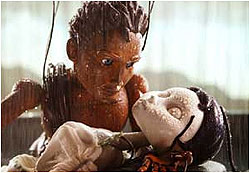 It is ostensibly a child’s fairy tale, but of the old school variety, the type of fairy tale which has both wonder and darkness at its core and teaches the child that both those forces are in the world. At times it reminded me of the ‘Prague Alchemist of Film’, the fabulous Svankmajer, while one character reminded me very much of the works of the Brothers Quay. Imagine, perhaps, Neil Gaiman writing for one of those remarkable visualists and masters of animation and puppetry and you start to have some idea of what Strings offers.

On the way home with my chum Melanie we were both struck by the quality of light in the night sky. Even at 11pm there was a pale blue glow in the northern horizon; true we are pretty far north here – perhaps not quite as close as the Land of the Midnight Sun, but still north enough that as we approach midsummer there is yet light of the sun even in the dark of night. It was the pale, eggshell blue of the sky just before sunrise, except it glowed, outlining the hills. The sky to the south was darker, but even this held a luminous glow, like dark velvet robes catching the lamplight. It was like being on the edge of Faerie, where the sky always held a gleam of twilight, infusing the city’s night with a magical quality to it that was quite appropriate to the marvellous, enchanting film we had just watched.