I spent a lot of hours on trains recently going down to London to meet my dear chums Jan and Linus who were over on holiday from Michigan. I haven’t seen them in the flesh for ages so it was terrific to spend time with them, especially since Jan had been seriously ill and when someone you care about is ill and thousands of miles away its aggravating that you can’t even give them a hug. So needless to say she got plenty of hugs that day. We had a terrific day in London (not my favourite city by a long shot), despite the extreme unfriendliness of most of the staff and clergy of Saint Paul’s Cathedral.

When I was a kid Saint Paul’s was free – now you stand in a long line of tourists from all over the world and finally stump up eight quid a person to get inside Christopher Wren’s masterpiece (mind you when I was a kid you could walk right up to Ten Downing Street and have your photo taken with the friendly and obliging copper on duty at the door to the PM’s residence – changed days, now you can’t even enter the street. I preferred it the old way, it said something about us). I’d forgotten how awfully gaudy the interior is – the interior decor is so bling it looks like a rapper’s bathroom; truly awful, no wonder Wren was so upset over them ruining the simple elegance of his architecture. And then there was the no pictures rule – yes, in this major tourist attraction in one of the major cities of the planet you’re not allowed to take pictures! Seriously, I’m not kidding.

And how do I know this? Because some extremely rude and ignorant shagwit of a Vicar came trotting out in his girly cassock and spent his day marching quickly up to the hundreds of visitors and barking ‘put that camera back in your bag’ before marching off just as quickly, which is probably just as well since, once I’d realised this rude git had actually been talking to me, I was sorely tempted to punch the ignorant twat for his rudeness and lack of manners – I don’t see why you can’t take pictures there (especially when you have paid way over the odds to get in) and there is no excuse for such apalling unfriendliness and lack of manners (the way he did it was just do arrogant and rude – oh well, that’s the C of E for you). 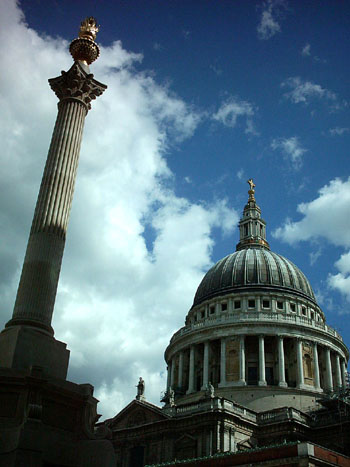 Can you imagine being told you can’t take pictures in and around the Eiffel Tower? Edinburgh Castle? Do these stupid buggers actually want people from all round the globe to visit their church? Word to the London tourist authorities – you want to speak to these aresholes about their non-camera policy and also about their extreme rudeness and unfriendliness – it ain’t helping London’s image any. I almost hope some of the Olympics committee went there… Wouldn’t do much for the London bid, would it. So, clergy of Saint Paul’s, you are a bunch of unfriendly and stupid idiots and you really need to brush up your people skills and revise your policy for the thousands of people who visit your vastly over-priced church. Of course, I still took some pictures anyway… and the Whispering Gallery is still amazing. 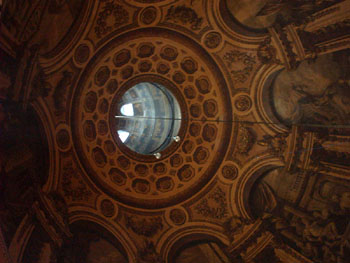 Anyway, I that no withstanding I had a great day with my chums and much food and booze was consumed and hugs exchanged. I caught an incredibly early train from Edinburgh (6am – eek!); upside to this was that as I was going down the east coast line I could watch the sunrise. Passing within yards of the coastline at some points I had a great view out over a smooth sea, a deep cobalt blue. The sun seemed to rise directly from the waters, as if the sea was giving birth to a burning, copper disc. The sky was a clear, Saltire blue and it met the deeper, darker blue of the sea in a perfect line of horizon, with the sun rising from the waves.

A little while later I passed through the Borders. Further inland I saw a gorgeous old home which had begun life as a very Scottish-looking tower house but had been modified later in less warlike times to resemble what Charlie McKean refers to as a ‘Scottish Chateau’. It sat on high ground, surrounded by deep green trees, newly re-leaved by the spring. The centuries old stonework was of red sandstone instead of the normal beige; it caught the rising sun and glowed with a wonderful coppery warmth, contrasting brilliantly with the verdant greens of the surrounding gardens and trees, utterly beautiful and one of those scenes you see for a few seconds only from the window of a speeding train. 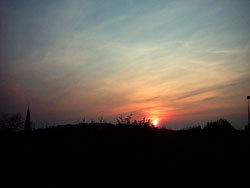 I think I prefer trains to planes because you see more as you travel; the country opens up to you and you see countryside, coastline and different cities pass before your window; there’s a sense of travel and moving that planes just don’t convey to me. On the way back up my window faced westwards this time and I had my own picture window of the sun setting on a clear, spring evening. As an experiment I snapped off a couple of pictures as the train sped home to the north through the twilight, not sure f any of them would come out, but a couple are passable; of course they never capture what the eye beheld, the full richness of a sunset, of pinks and reds illuminating the few wispy clouds like an Impressionist painting, the countryside in the foreground covered in deep, long shadows as night fell and the sun fled westwards. 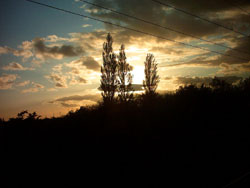