I’ve been watching the new digital animated version of Gerry Anderson’s classic Captain Scarlet the last couple of Saturday mornings and I am a happy little geek! I’m a fan from my childhood days – my Captain Scarlet plush is standing about two feet from me as I type, next to my Hellboy (great combo! Double red!).

Okay, so it can be fun to sneer at the puppets, but I totally bought into a a kid and still enjoyed the art and the incredible detail of the sets and kit as an adult (Anderson’s miniatures were so advanced Kubrick tried time and again to get him to work on 2001). The new CGI Scarlet is pretty fun – it is updated but still clearly Scarlet and as such fun for kids and Big Kids (that’s me) alike.

The attention to detail in the sets and equipment is still there and the quality of the animation is generally pretty good, especially for a weekly series. There are also nods to the fact there are grown-up fans watching as there are romantic/sexual undertones to some of the relationships between Scarlett, Captain Blue and the all-time foxiest fighter pilots in history, the Angels – last week’s quite clearly had Destiny Angel checking out Scarlet’s butt as he walked off down the corridor and there were some nudge-nudge, wink-wink titters about the two of them being trapped in the lift together.

I’ll keep watching – the Dan Dare CGI never really worked out (although the re-issued graphic novels are a blast), but Scarlet, who is obviously partly inspired by Dan Dare, Pilot of the Future, does seem to be working. Great fun, but why put it on with kid’s TV on a Saturday morning!?!? Too good for just the kids… Trailer here along with cool animated menu where you click on parts of Skybase for info. A little slow when I was on, but it may just be busy since it’s not long after the show has been on. Must find out if there are any collectables to go with the new show – for, er, professional reasons of course… Okay, because I want the toys… Toys are good and never let anyone tell you that you are too old for them. S.I.G.!! 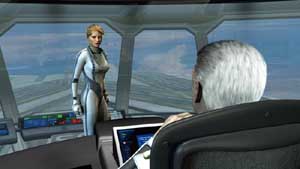 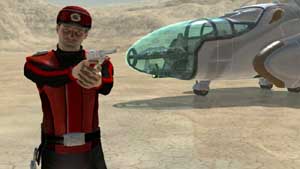