We had a good time round at Gordon’s place for Hogmanay and I also was lucky enough to get some rather nice birthday/late Xmas pressies. Really unusual string of mini-lamps from Mel, decorated with a flock covering making them very Victorian Gothic (just my kind of thing) and a very fine crop of classic Universal horror movies of the 30s from Gordon. We went out into the garden for the Bells (and to get away from Bruce the greyhound’s smelly farting) and popped some champagne (outside so free to let the cork go wwwwooooooossssssshhhhhh into the sky then realise it is going to fall back on us… D’oh!). Bang on midnight off went the fireworks across Edinburgh. We had a pretty good wrap-around view because we could see them going off from several different sites and not just the ones from the Castle. 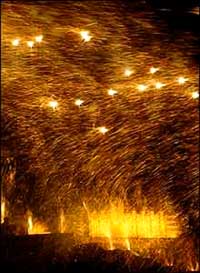 Weather broke today back to howling gales and rain – good day to curl up with the mogs and drink hot coffee and the ever-popular Scottish remedy for alcoholic poisoning, Irn Bru (officially blessed by the General Assembly of the Church of Scotland for it’s healing powers). Some nice big thunder rolls and lightning too – nice of the weather gods to wait until today so the Hogmanay party in Edinburgh wasn’t ruined like last year’s bash (for those who don’t know there is an enormous street party in Edinburgh each year for Hogmanay). Today the annual charity event called the Loonie Dook took place where mad folk (the loonies) take to the frigid waters of the Firth of Forth, which are chilly enough to freeze the balls of the proverbial brass monkey msot of the year round, let alone January. As Comrade Ken noted though, it was so wet and wild weatherwise you didn’t really need to get into the river to get soaked and frozen 🙂