Yep, it actually did turn out to be a white Christmas, at least back on the west coast anyway. This is the view from my parent’s home. Generally I prefer living in the middle of the city but there’s a lot to be said for living somewhere with a view, and the family home has a pretty darned good one, especially since it is built on a hill and so gets a clear view over the rooftops towards the extinct volcano range of the Campsie Hills, which I’ve biked over more than once (it was certainly easier in the old MG than the bike!). There are some flats in Edinburgh which command excellent views, even in the city centre, but they also command spectacular prices. 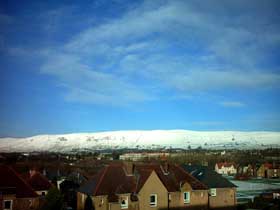 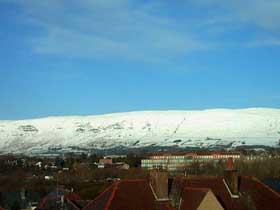 On Christmas Day the snow had hardened. Dad and I went out into the back garden to erect a new bird house (one of Mum’s presents from Dad which she loves) and the snow on the back green was all crisp, cracking under our feet with a satisfying sound. Clear blue sky and bright sunlight but very, very cold. A little Robin redbreast came poking around the new bird house looking for some Xmas lunch – family home, snow, Robin; it was like a Christmas card! Sorry, didn’t manage to get a picture of the bird since he was just too darned quick for me. 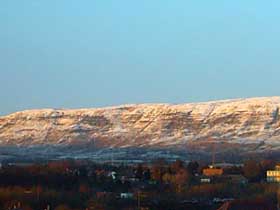 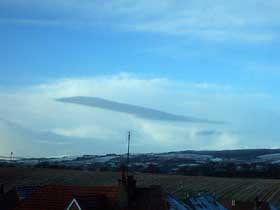 It was a pretty quiet time actually – normally my folks play host to a fair chunk of the family for Xmas dinner but this year it was just the three of us. Naturally I was pampered and over-fed on my mother’s fantastic cooking and baking. Almond and sunflower seed loaf covered in mushroom and herb sauce, all home-made. Nothing beats home-made, especially your mum’s cooking! Some things you never grow out of (okay, there are a lot of things I never grow out of, but you know what I mean). Home-baked layers of shortbread with fresh cream and strawberries, garnished with freshly-made strawberry puree. You have to hold your spoon just so to crack the shortbread layers then scoop it up with the cream and the strawbs. Temptation to lick the plate clean is pretty overwhelming (yes, it is that good – you wouldn’t raise your eyebrows if you’d tasted her baking!).

Managed (all too brief) visits to some of the rest of the family while I was back home too, which was great. Good food, wine, some nice pressies and best of all time with my mum and dad. Also found out my cousin Malcolm had just left Sri Lanka before the dreadful Tsunami hit the island. When you’ve had all that you have to ask who needs riches, really? Hope you all had a good time as well.