What can I say about the Incredibles? Other than the fact that it is incredibly good? Yes, I can hear you all groaning from here, but I am contracually obliged to go for the obvious, bad pun. The story is excellent, with a first half which is probably a little dull for the youngest audience members but will ring bells with the older ones (past glories, lost youth, is this my life now? What happened to me?) and a wonderfully action-packed second half which manages to mix up family life with superheroics and supervilliany in a splendid mix. There are references galore for the trainspotters – the supervillian has a volcano lair with rockets and even a monorail system right out of Bond’s You Only Live Twice. The animation is stunningly good. In fact it often doesn’t look very CGI to my eyes (a problem is that no matter how good sometimes CGI is still obviously CGI); it kind of looks more as if they have filmed models, the texture and appearance seems so solid and three-dimensional, especially the exterior scenes. Animation and superheroes, two of my favourite genres fused and a witty script with excellent characters, how can you go wrong? 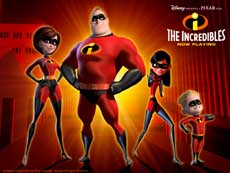 Caught I Heart Huckabees this evening with Mel. Another winner in the movie stakes, although even I consider some of it to be pretty weird and freaky, which is saying something. Very good fun though and great performances all around, especially from Lily Tomlin (nice to see her on screen again) and wee Dustin. There are several websites for Huckabees, including a pseudo blog written by Tommy Corn’s character, which is the sort of nice touch I haven’t seen on a film’s web-marketing for a while (Memento, one of my top-ten movies, also made innovative use of the web medium). There’s also one for the Huckabee’s company and of course the existential detective agency at the heart of the proceedings.