Had an enjoyable afternoon at the refurbished ’s Age of Titian exhibition with Melanie. It covers several decades of mostly Venetian art, from those who came before and inspired Titian, such a Bellini and those who he in turn influenced after him. The range of subjects was diverse, although obviously as you’d expect from the time and period there are a preponderance of religious themes, notable variation of the Madonna with Child. One large work struck me especially – it’s not that it is so vastly different from some of the others, except for the Virgin herself, who is, quite literally, radiant. The rest of the painting is far from colourless, but the Madonna glows. Not just the stunning blue of her gown, but her whole body and face. It’s as if she is sitting in her own beam of (divine) sunlight. The effect is one that just makes you want to sit there and marvel at it (and so I did).

Another had some of those trademark naughtiness moves that Venetian art became (in)famous for at this time, showing the Virgin with two female saints. The un-named saint has a very tight – sheer actually – bodice which contours her breast’s shape exactly and she has nipples. Big deal today, but at that time and place and in a religious work? It was rather timely to visit the exhibition (which is rather pricey, especially since our taxes paid for it and the RSA’s refurbishment, but worth it) as I’ve been watching the excellent series on Venice on BBC2 and this week’s covered the age of Titian, showing both the artist and his circle of poets, musicians, sculptors etc and their sometimes scandalous lifestyle – bohemians centuries before the term was coined, eschewing Catholic correctness for fun and for art. The church authorities who defamed them are gone and forgotten while the artists’ work lives on, immortal, adored, inspirational, which I suspect is a good moral.

Many of the works illustrate a growing realism (a sense of perspective; using real women’s bodies for modelling – a golden era for big-bottomed girls with pale skin!) which would influence all European art which would come in the following centuries. One factor which is common in described the portrait of the Madonna. You feel as if the artist has magically transposed the Mediterranean sunlight into the fabric of the work and that here we are, half a millennium later on a cool, grey, autumnal day on the far north of Europe bathing in the same sunlight, captured centuries before, thousands of miles away. It made me think on the music of Mozart, which, to my mind has always had the quality of sublime light.

There were also ceramics (including some fruit-decorated vases which look so contemporary you could easily find something similar in Pier today), fabrics, sculpture (stone, wood, gold and even a remarkable small piece in rock crystal and another amazingly detailed miniature in wax). There were also books, which as you can imagine, drew my attention. Drawn from the collection of the National Library of Scotland there were some remarkable books, including a gorgeous 16th century illustrated folio edition of Ovid’s classic Metamorphoses. Another contained the very first depiction of the city of in a book, with the Doge’s palace and the San Marco clearly recognisable – there’s even a gondola in the canal. This exquisite book dates from 1479.

Afterwards we headed down underneath the RSA to the newly opened Weston Link, an underground connection to the National Gallery of Scotland, which sits behind the RSA on the Mound (which leads up to the Castle and the Old Town from the New Town going north-south and bisects the marvellous Princes Street Gardens going east west). It’s rather more than a glorified underground corridor however. Expanded gallery shops, lecture rooms and very well presented multi-media terminals for the visitors. We checked out a few of the flat-panel touch screen terminals which gave access to information, images and audio on current exhibitions and on other museums and galleries both in the city and around Scotland – very well done to the NGS for good, easy-to-use IT. The connection also leads out into a lovely open area (underground still) with a café and a full-sized (and expensive I’m told) restaurant. As this is on the edge of the building one wall is mostly huge picture windows (some of which double as sliding doors for easy access for prams and wheelchairs) which look out over the eastern Princes Street Gardens towards the Gothic tower of the Scott Monument. I suspect I may nip in for coffee on my way home from work from time to time. 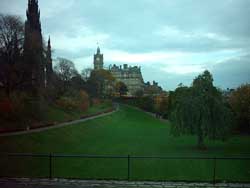 isn’t that a fab view to have from a cafe? bear in mind you’re actually below street level here and those lovely gardens were once stinking, stagnant lochs protecting the Castle’s flanks until the creation of the New Town two and a half centuries ago.