One of those rare events for Murdoch’s Sky cable/satellite channel – a quality programme that wasn’t the Simpsons (although there have been several Most Excellent new Simps this month – the one where Homer becomes a superhero in the guise of Simple Simon, your friendly local neighbourhood Pie Man is standout) – Battlestar Galactica. They had a major push with umpteen trailers plus talking head slots with the main characters for the series on Monday 18th (apparently we’re getting it before the ) and also the telemovie/pilot over the last couple of days.

When I first heard they were reworking this old show I was one of those who was a little cynical. Not because I was a die-hard fan of the original – I remember it from the 70s and 80s and enjoyed it but it didn’t blow me away and even as a ten-year old I thought it was rather silly – but because I am generally wary of remakes. The fact that there were two competing remake versions made it sound even more unlikely that either would work (Richard ‘Apollo’ Hatch tried to get his own version running, picking up from the original version he starred in). I think it was only when they announced Lorne Greene’s old role of Commander Adama was being given to the heavyweight acting talent of Edward James Olmos that I started to think there may be something good about the new show.

Having watched a download version of the pilot movie I still sat and watched a ‘proper’ digital broadcast on Sky and enjoyed it just as much second time around. The new show, although sticking to the same basic premise of humanity’s world being overwhelmed and annihilated by the mechanical species of Cylons while survivors go on the run protected by the only surviving human warship, is a far grittier and more realistic show. Unlike the original the survivors’ response to genocide isn’t to stop off for a glittering disco and thank smeg there isn’t a bloody furry animal thrown in to the mix. Pretty much all of the characters have flaws – they’re not the almost perfect humans of the Star Trek universe and consequently are far more accessible to viewers and more believable and sympathetic. There is action but again given a gritty, realistic (for SF) quality to it – ships don’t commit swoops and loops in space, they use thrusters to alter direction and pitch, when explosions occur it’s not just a gee-whiz big-bang effect, there is debris and sometimes people visible – in other words they are showing the consequences of the action scenes. The Galactica itself has the distinct look and feel of a WWII aircraft carrier, along the lines of the old fleet carriers like Ark Royal or – actually looking more lo-tech than contemporary aircraft carriers, but it works well. The net effect of all of this is to enhance the most important aspect of any series – the drama. Hopefully the series proper itself will build on this. 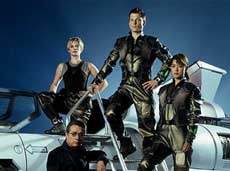