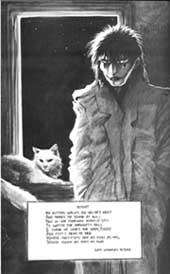 As National Poetry Day is nearly here – Thursday 7th – I thought I’d bring you one of my favourite poems, which I first came across many moons ago when I picked up an interesting, Gothic-looking comic book that few people had heard of at that point. A little, very personal-seeming comic mostly drawn in heavy Will Eisner-esque inks but with greytone flashbacks in a watercolour style which were beautiful about a man and a woman in love, about unjust death and karmic justice. It was of course James O’Barr’s The Crow, which would go on to become an excellent film in the skilled hands of Proyas although it would be marred forever by the tragic on-set death of star Brandon Lee. It also had a very nice pussycat in it, after whom I named a lovely little kitten I had after college: Gabrielle. And in one little aside James has a one-page panel with Eric Draven as the Crow and Gabrielle with a gorgeous poem by Lois Weakley McKay. It’s not easy to make out at this size of picture, so here is the text:

My kitten walks on velvet feet

And makes no sound at all;

And in the doorway nightly sits

To watch the darkness fall

I think he loves the lady, night

And feels akin to her

Whose footsteps are as still as his,

Whose touch as soft as fur.